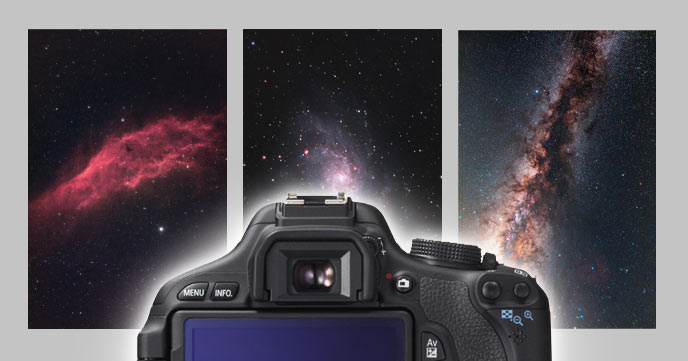 In a recent video, I shared my results using a $200 DSLR for astrophotography. In a hobby known for being very expensive, I think it is very interesting that such results can be obtained using an old, inexpensive camera.

In this post, I’ll prove to you that incredible astrophotography results are possible with an old, used, entry-level DSLR camera. And no, it doesn’t need to be modified to achieve impressive results. (I’ve got plenty of unmodified DSLR astrophotos to prove it).

You can pick up a used Canon EOS Rebel T3i (600D) DSLR for under $200 on eBay, and it will likely include a kit lens (18-55) with it. This will, of course, be a stock model of the camera, but you can modify it by removing the internal IR cut filter (more on this a little later).

I’ve been using a Canon EOS Rebel T3i for astrophotography since 2016.

This particular camera helped me capture stunning images of the night sky for the past 4 years, whether it was through a telescope, or with a camera lens attached.

Since picking up the 600D in 2016, I’ve used some powerful cameras for astrophotography (including a monochrome CCD), but I still find uses for this old DSLR today.

In 2020, the T3i is still one of the most popular DSLRs being used for astrophotography in the amateur community. Not bad for a camera that launched in 2011.

I was surprised to see how many members of the AstroBackyard Facebook Page are still using the Canon 600D for astrophotography. It validates my personal success with this camera and its relevance in 2020.

The photo shared at the end of the video (see below) is certainly not an APOD worthy image. But, to newcomers to the challenging hobby, this image is a real eye-opener to what’s possible using beginner-level gear.

The entire astrophotography rig used for the photo is relatively affordable and portable when compared to a traditional deep-sky imaging rig. The star tracker is the key to long exposure imaging of deep-sky objects in the night sky, and the one used in the video (Sky-Watcher Star Adventurer) is currently listed at $399 USD on Amazon.

The Canon 600D can certainly hold it’s own when attached to a high-quality imaging refractor riding on a robust equatorial tracking mount (Here are my results using it with a 132mm Triplet APO). But the imaging session shared in my video was much more modest.

Here is a complete breakdown of the entire imaging rig used for my image of the Horsehead Nebula and Orion Nebula in the constellation Orion: 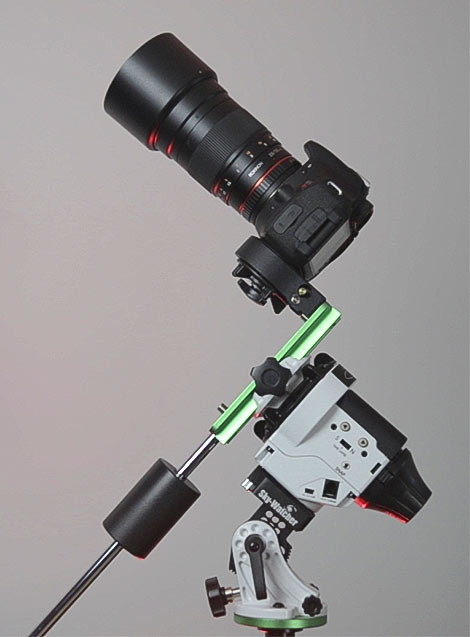 What Makes this Camera Special

The 600D is still an excellent DSLR for astrophotography. Although it lacks important features like cooling and precision gain control (found in modern dedicated astronomy cameras), it excels in the category of versatility.

You can use it in countless imaging configurations from wide-angle nightscapes to deep-sky astrophotography through a telescope. You are free to explore and capture the night sky with only a tripod and lens, if desired.

In my experience, the Canon EOS Rebel T3i, in particular, sits in the “sweet spot” between functionality and value. I expect the cameras that surround the 600D in the Rebel line-up (such as the T4i etc.) to offer a similar experience, but I can’t share any personal experience using them.

As you can see from the list below, I am no stranger to Canon DSLR cameras and lenses. 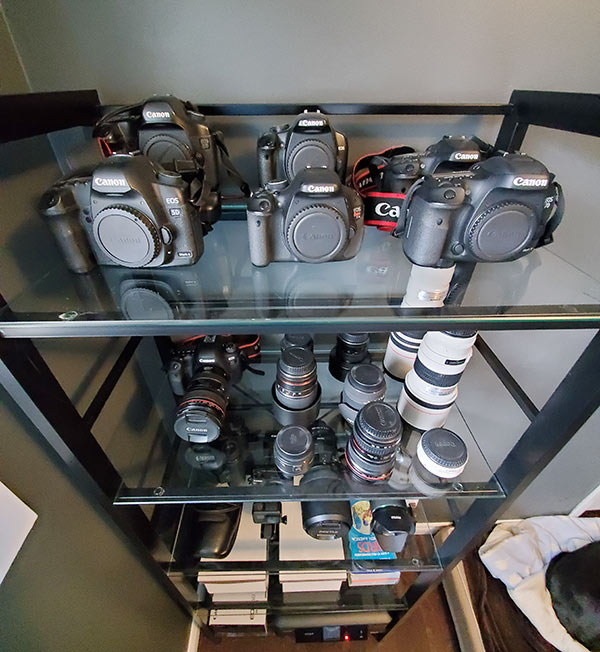 The Canon EOS Rebel T3i may seem like an odd choice for astrophotography in 2020. After all, there are many newer, more capable DSLR (and mirrorless) cameras available now.

The truth is, many of the added features found in modern DSLR and mirrorless cameras make only subtle differences in image quality when it comes to deep-sky astrophotography. Your daytime photos and videos may look a lot better, but we’re more interested in leaving the shutter open for 5-minutes at a time at night.

Yes, dedicated astrophotography cameras like the Canon EOS Ra are a big leap forward, but the price tag reflects it. This is a different animal altogether because this camera body was designed with the unique and punishing routines of astrophotography in mind.

My point is, if you can make do without advanced features such as 30X live view and a touch screen LCD display screen, you may be quite surprised at what an old DSLR can do.

In fact, even older Canon DSLRs are still useful choices for astrophotography, such as the Canon EOS XS or XSi. If you’re new to astrophotography, it’s worth looking on eBay or your local classifieds for one of these gems.

Here are some of my favorite astrophotography images I’ve captured over the years using my Canon EOS T3i. 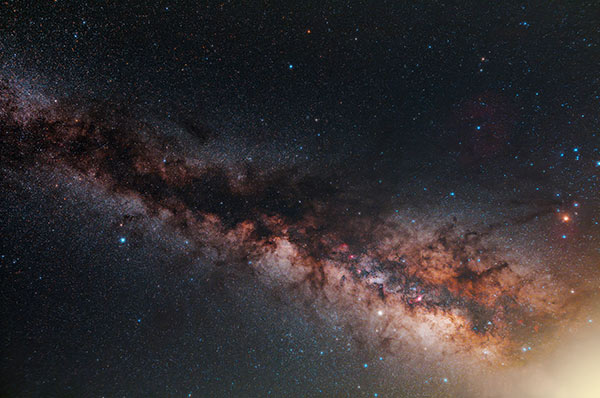 The Canon Rebel series DSLR cameras have reliable workhorses for many astronomy applications. For example, Marie Lott has captured many photos of asteroids using a Canon T3i for the Astronomical League’s Asteroid Program.

Many members of the AstroBackyard Facebook community use the Canon EOS Rebel T3i for astrophotography and had several images to share using this camera. Here is an excellent example of the T3i being used for deep-sky astrophotography by Luke Arens. 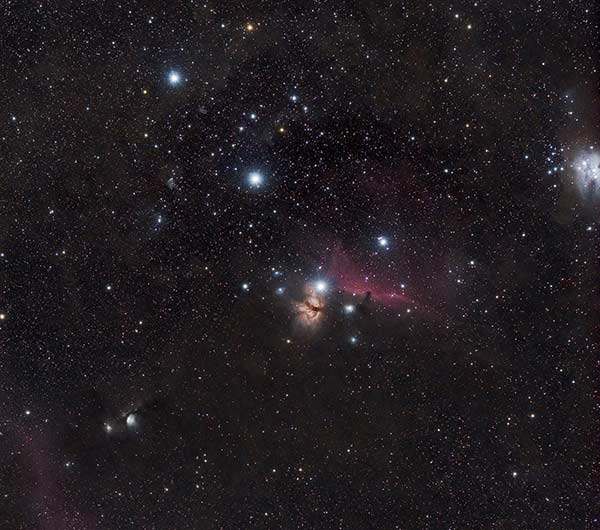 An articulating LCD screen is now quite common in DSLR and mirrorless cameras, which is fantastic news for amateur astrophotographers. If you’ve ever shot long-exposure deep-sky astrophotography with a camera that did not include this design feature, you’ll understand why it is so convenient.

Deep-sky imaging involves the camera body to be positioned in plenty of upward orientations that have the back of the camera pointed at the ground. With a flip-out screen, you’re able to perform key actions such as 10X live-view focus and framing your target without breaking your neck.

This was the biggest shift in user experience when upgrading from my XSi to the EOS Rebel T3i.

You’ll also be able to find extremely affordable accessories on Amazon to improve your astrophotography experience with this camera. I recommend looking into a simple remote shutter release cable, and an AC adapter unit to power the camera without batteries.

As for the aging 18 MP sensor in the T3i, I think you’ll find the 5184×3456 pixel resolution to be more than adequate for your final application for the image. I tend to scale my images down for online sharing (along with a heavy crop in many cases) but have also made large 18″ x 20″ prints for my home office.

A stock version of the Canon EOS Rebel T3i is capable of capturing beautiful photos of the night sky, including many deep-sky nebulae and galaxies. A stock camera really excels at broadband RGB imaging of galaxies like Andromeda or the Triangulum.

Certain nebulae targets are worth a shot (such as the Eagle Nebula), but if this is your primary interest, a modification is recommended.

Which Camera Lens to Use?

DSLR’s and mirrorless cameras are the smart choice if you plan on using camera lenses at varying focal lengths for astrophotography (in my opinion). Dedicated astronomy cameras can be used for this purpose too, but they lack a user interface and require external computer control.

The Canon EOS Rebel T3i includes the EF-S lens mount, which means you have access to Canon’s full line-up of impressive EF and EF-S lenses. It’s a crop sensor (APS-C) DSLR, so remember to include that 1.6X crop factor when planning projects with specific focal lengths.

For capturing wide-field targets or multiple deep-sky objects at once, the Rokinon 135mm F/2 is an excellent choice. The crop sensor of the T3i naturally creates a closer frame around large targets like IC 1396 and the North America Nebula. 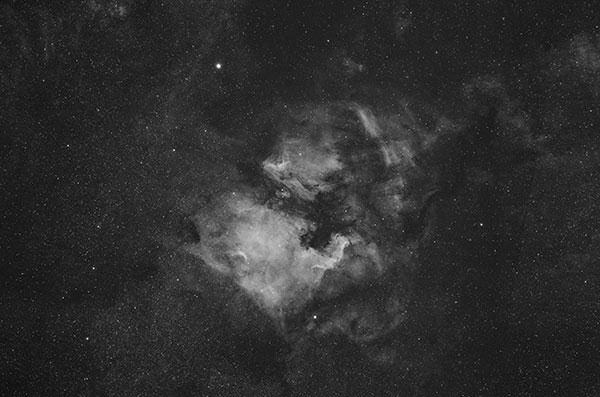 For Milky Way photography, the Rokinon 14mm F/2.8 is a great match. Some may find 18mm (a standard kit lens focal length) to be a little too close for a shot of the Milky Way using a crop-sensor camera. However, 14mm widens the image up substantially.

Because I do the majority of my astrophotography in the backyard at home, light pollution filters have become a big part of my image acquisition process. DSLRs like the Canon EOS Rebel T3i are great because there are plenty of filters available that will clip inside of the camera body. 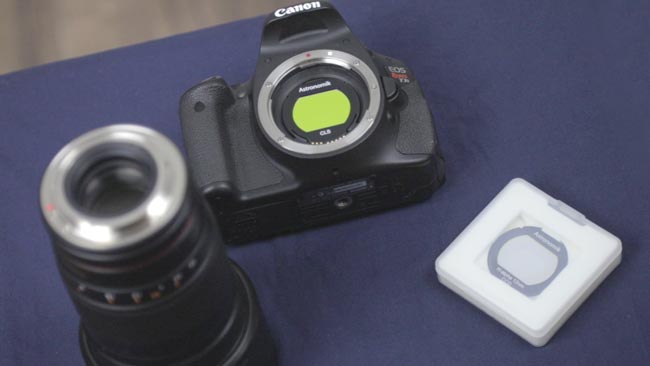 That means that you can easily use them with a telescope or a camera lens depending on your project. Some of my favorite broad-spectrum, clip-in light pollution filters for the 600D include:

You can, of course, use 48mm round mounted filters with the T3i and your telescope as well, but you’ll need to thread those to your field flattener or adapter in front of the camera.

The Optolong L-eNhance is an exceptionally useful dual bandpass filter for light-polluted skies when used with a color camera. This filter isolates the important bandpasses in the h-alpha and O III wavelengths where precious details of many nebulae lie.

You can use the Canon T3i for narrowband imaging in the h-alpha wavelength as well. Although many will argue that narrowband imaging with a color DSLR camera is a “waste of time”, I found it to be a practical way to add impactful details to my color images.

The Astronomik 12nm DSLR Ha filter is a great choice for those looking to capture narrowband images of hydrogen-rich nebula using their DSLR.

Modifying your DSLR for Astrophotography

Unless you’re new to the blog (welcome), you’ve likely heard me talk about the process of modifying your DSLR camera for astrophotography many times. It involves removing the stock internal IR cut filter that sits over the sensor, and either replacing it with an astrophotography-friendly version or leaving it off altogether.

The modification allows the red hues emitted by emission nebula in the bandpass of 656nm (h-alpha) to be collected by the sensor. It’s an important upgrade to consider if you’re serious about imaging deep-sky nebulae targets in the night sky. 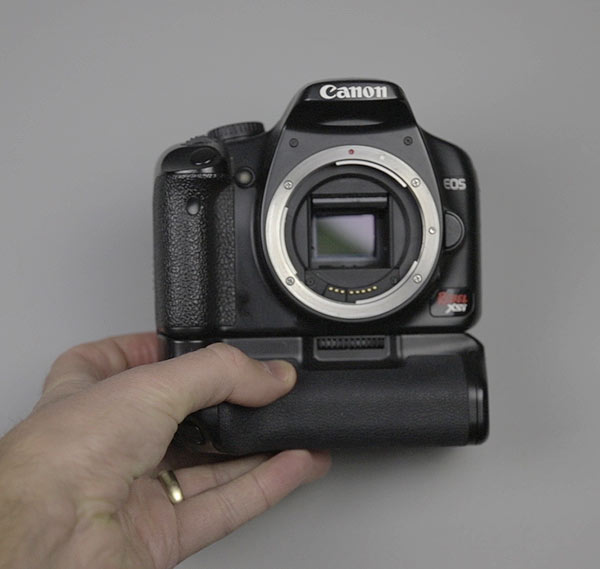 I “modified” my previous Canon Rebel DSLR for astrophotography (450D).

I performed this astrophotography modification myself on my old Canon ESO Rebel XSi (450D), and it wasn’t even that hard (as long as you take your time and follow the instructions). Seriously, if I can do it, you can do it. I followed the detailed instructions presented by Gary Honis on his website.

For the 600D, I opted to purchase a pre-modified version of the camera from a company called Astro Mod Canada. The modification is referred to as the “full spectrum mod” or the “naked sensor mod”. For the camera to record images properly with this mod, you must use a UV/IR cut filter when imaging, which is often included in many of the light pollution filters I use.

Who This Camera is For:

Who This Camera is NOT For:

If you’re on a tight budget and looking for your first DSLR for astrophotography, keep your eyes peeled for a great deal on a Canon EOS Rebel T3i or similar DSLR body.

This was the road I personally took towards imaging the night sky, and I continue to enjoy the simplicity and fun of DSLR astrophotography to this day.

In the future, a mirrorless camera such as the Canon EOS R (or Ra) will likely be my next choice. 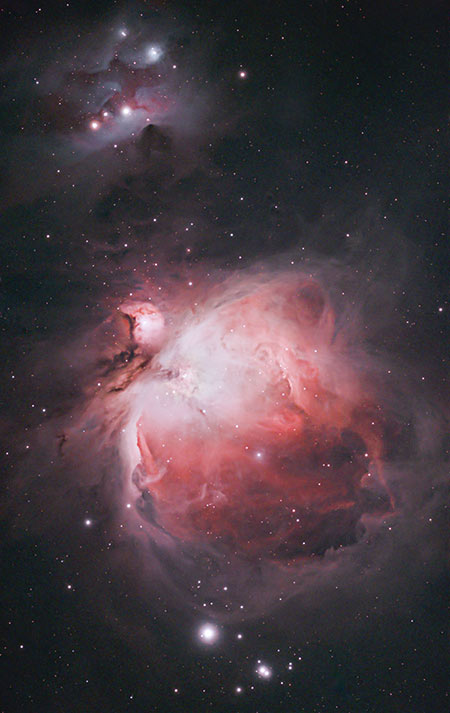