The Canon EOS 60Da is an 18 MP DSLR camera designed specifically for astrophotography. In fact, the “a” in the camera’s name stands for “astrophotography”. Shortly after publishing and sharing this post on social media, I found a used Canon 60DA camera body for sale, and purchased it on the spot.

Not only does the 60Da represent Canon’s continued support for the DSLR astrophotography market, but it offers beginners a comfortable choice to consider when jumping into a hobby with a steep learning curve.

Riding on the success of Canon’s first DSLR camera for astrophotography (the Canon EOS 20Da), the 60Da is (currently) the newest model available for DSLR astrophotography enthusiasts looking for an out-of-the-box DSLR for astro-imaging. 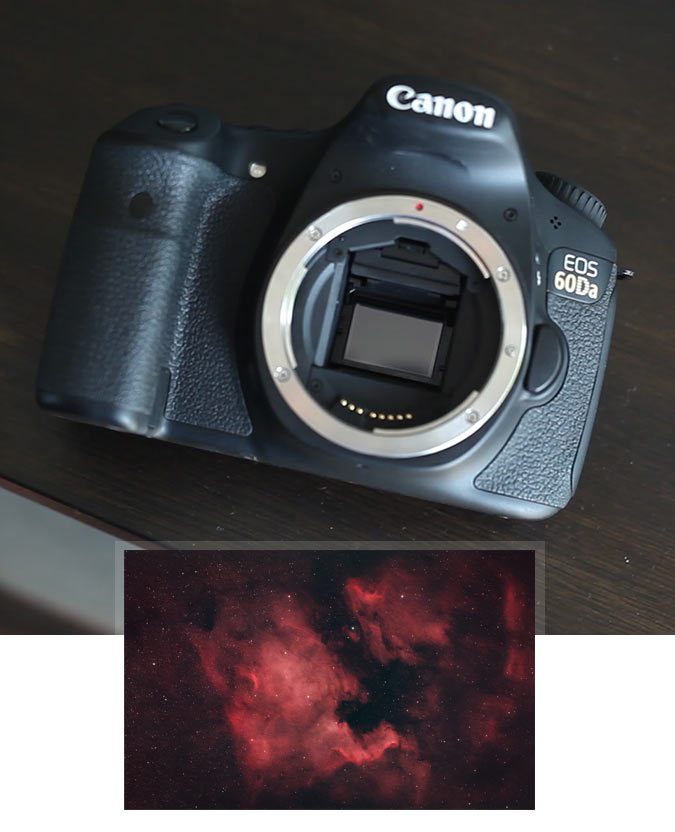 The Canon 60Da has a modified infrared filter and a low-noise sensor with heightened hydrogen-alpha sensitivity for improved photography of red hydrogen emission nebulae.

Astrophotography cameras come in many shapes and sizes, but an astro-modified DSLR will always be a practical choice for beginners. Unlike the rest of the EOS cameras in Canon’s lineup, the 60Da does not require any modifications to capture astrophotography images with increased color and detail in many objects.

This camera was built exclusively for astrophotography, which is why I dig it so much.

What sets this camera apart from the original Canon EOS 60D, is that it is tailor-made for astrophotography. The 60Da was designed to ensure accurate depictions of the red hues associated with many deep-sky emission nebula targets.

The CMOS camera sensor has an increased sensitivity to hydrogen-alpha (Hα), which sits at the 656nm transmission line. On regular (stock) DSLR camera bodies, this wavelength is significantly cut off due to its impracticality for daytime photography uses. 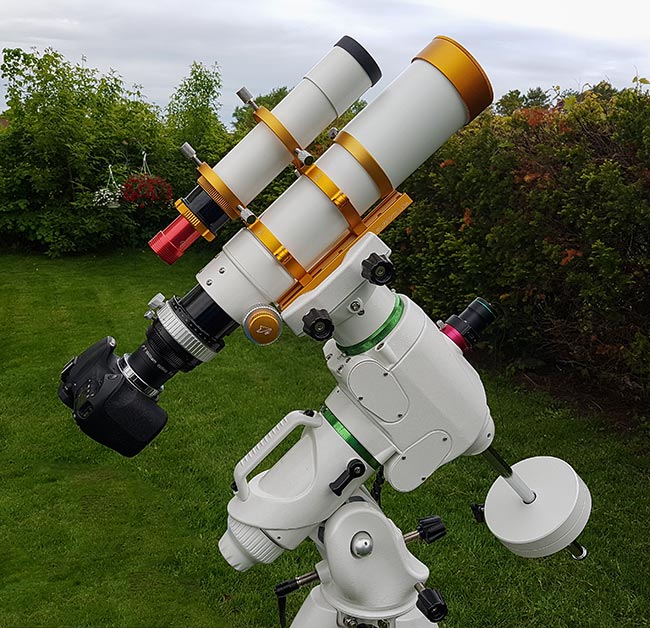 Stock DSLR cameras come from the factory with a long-wavelength filter in front of the camera sensor. This built-in filter is great for most types of photography because it filters out certain wavelengths of red light that skew “normal” daytime colors.

This filter’s job is to create a better match between the images taken with the camera and our natural human vision. Without this filter, skin tones can look overly red and unnatural. Unfortunately for amateur astrophotographers, the built-in long-wavelength filter ignores some of the most important wavelengths of light emitted by deep sky objects in space.

The image below was captured using my Canon EOS 60Da through a 73mm refractor telescope (with an Optolong L-Pro filter). The final image includes 27 x 3-minute exposures at ISO 800. 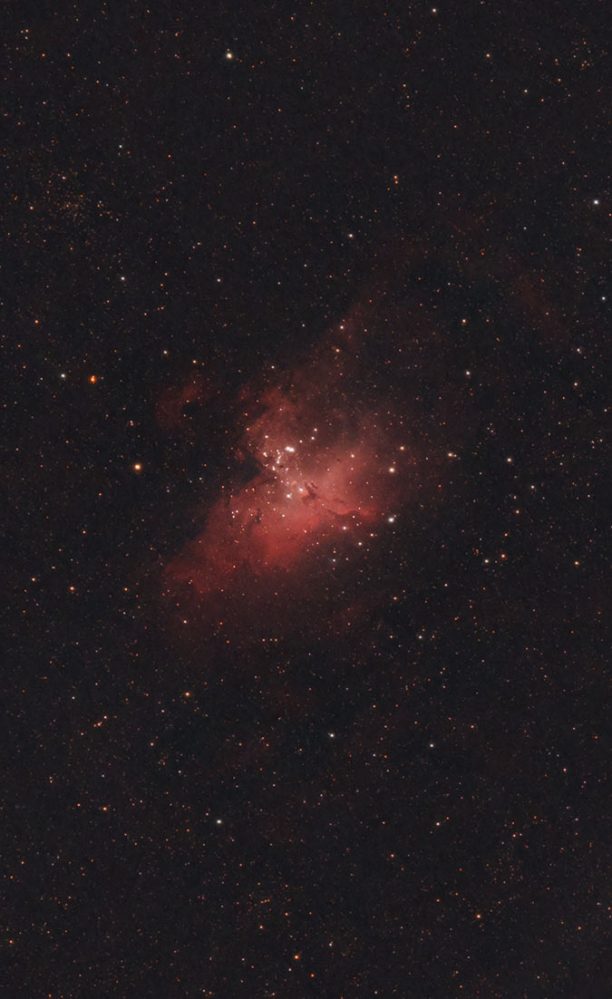 The Eagle Nebula emits a strong signal in the hydrogen-alpha emission line (656.28 nanometers).

Amateur astrophotographers are forced to use a dedicated astronomy camera with this wavelength intact or modify their existing camera by removing the standard IR cut filter inside of the camera. I performed a full spectrum modification to my Canon EOS Rebel Xsi many years ago, by taking the camera apart and carefully removing this filter.

Not only did this modification void the warranty of the camera, but it’s autofocus and sensor cleaning modes no longer work. On top of that, the camera can no longer be used for regular daytime photography due to the fact that my images will show a red cast over them that would require correction in post-processing.

Check out this fantastic comparison shared by Tanja Schmitz on Flickr.

The Newest Astrophotography DSLR from Canon

Unfortunately, the Canon 60Da was released in April, 2012, and it is getting older as each year passes. It should come as no surprise to know that this camera body has been discontinued, and finding used models can be hard to come by.

The used Canon 60Da models that I have located online (eBay) are demanding a steep premium. I have not seen a Canon EOS 60Da for sale for less than $1,000 US online in my searches.

Consider the fact that tests have shown that modifying other Canon camera bodies can outperform the 60Da in terms of the amount of red light collected (see below), that’s a tough sell for many astrophotography enthusiasts.

I hope that Canon decides to create a new DSLR camera catered to amateur astrophotography in the future and that it’s a full-frame body this time around. (How about a Canon 6Da?)

In this incredibly detailed review, you find useful information about the Canon EOS 60Da’s performance, including noise tests at varying temperatures. The tester revealed that the 60Da recorded an impressively small amount of noise present when shooting at ISO 800, at +8°C.

In a head-to-head comparison between the 60Da and a Baader modified Canon EOS 350D, the 350D was able to record fainter details than Canon’s official astrophotography camera. I had often heard that an astro-modified DSLR could outperform the 60Da in this regard, and this test appears to have proved that.

Comparing the 60Da to a Baader modified 350D (Lorenzo Comolli).

Jerry Lodriguss tested the Canon 60Da extensively on his website back in 2012. He compared the performance of the 60Da with a stock 60D, and a modified Canon T2i (550D).

Along with the useful comparison images of the Dumbbell Nebula below, I found the following chart to be of particular interest to those that are comparing camera bodies to the 60Da. 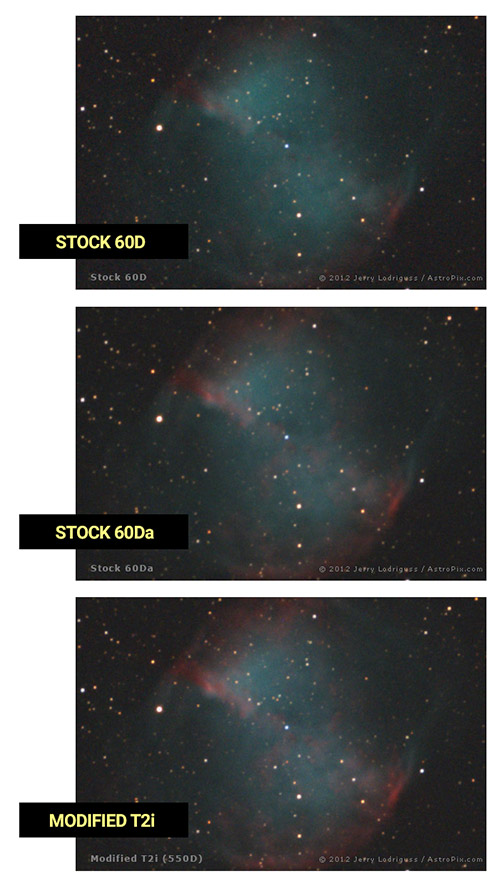 A head-to-head comparison between camera bodies by Jerry Lodriguss (Catching the Light).

When comparing the 60Da to a more modern Canon body that has been modified for astrophotography professionally, the latter option will always win. I all head-to-head tests between the Canon 60Da and an astro-modified camera, the modified version collects more photons, and benefits from an improved signal-to-noise ratio.

So, if my modified Canon EOS Rebel T3i beats the Canon EOS 60Da in terms of performance, why do I want one? My interest in the Canon 60Da revolves around the nostalgia and collectability of the camera. 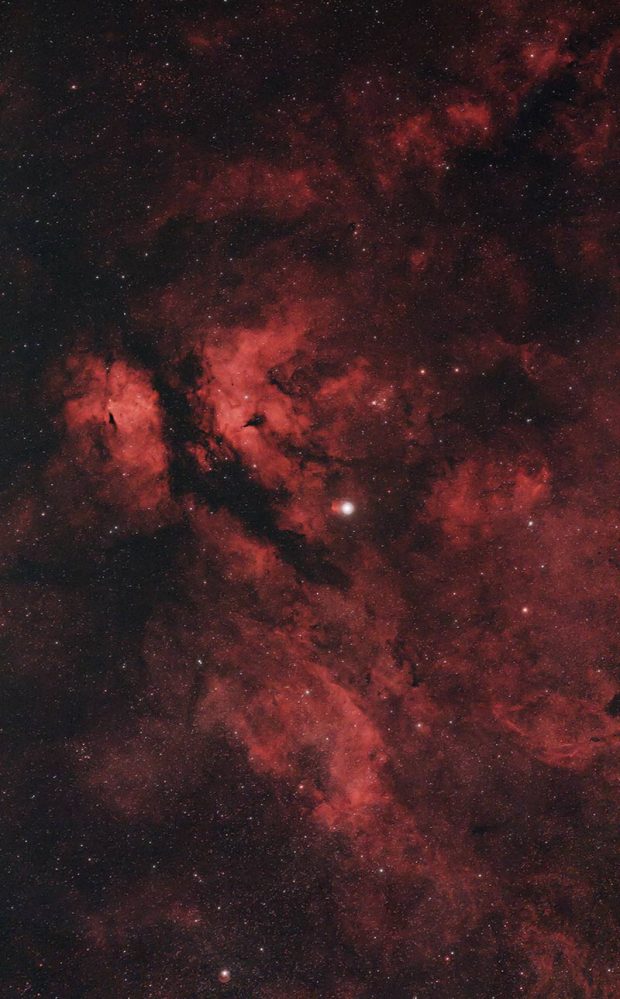 The Sadr Region in Cygnus. Canon 60Da with the OPT Triad Ultra filter.

What’s so special about the 60Da?

You may be wondering why an increased sensitivity to hydrogen-alpha is so special? Even though a regular Canon EOS 60D (or any other Canon DSLR) is quite capable of amazing astrophotography images, the 60Da gives you a major advantage when it comes to shooting emission nebula targets.

The increased IR sensitivity allows the camera to collect the reddish hydrogen-alpha light emitted by deep sky objects such as the Eagle Nebula, and the Rosette Nebula.

For example, diffuse nebulae like the California Nebula (NGC 1499) seem to jump off of the screen in a long exposure image with an astro-modified camera. Not all emission nebulae targets have such a dramatic difference, but all will benefit from a camera with increased sensitivity at the 656nm transmission line.

The example below shows the difference between an image of the Eagle Nebula using a stock Canon EOS 7D Mark II, and the Canon EOS 60Da. 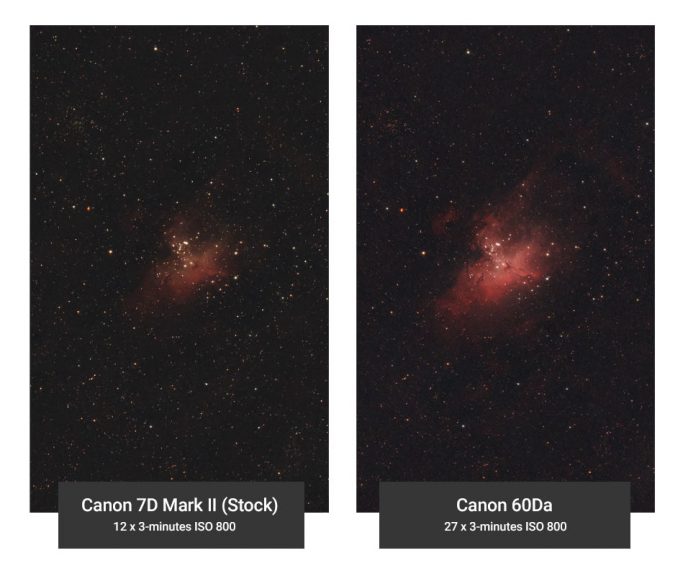 A stack of 3-minute images using a stock DSLR vs. a stack using the 60Da.

As I was made very aware of in the comments of my video, this is not a perfect test. The point is, the sensitivity in h-alpha is present, especially on an emission nebula like M16. The same amount of integrated exposure time was not collected on each because of time constraints, nothing else.

To be honest, my backyard is an awful testing environment. The weather is predictable, so taking a pre-determined amount of exposure time on a single night is tough.

If you are looking into buying a used Canon 60Da, you may be wondering which lens to use for astrophotography. Many amateur astrophotographers will be attaching it to a telescope (using the appropriate adapter), but what about those that wish to capture wide-field images using a camera lens?

The Rokinon 135mm F/2.0 ED UMC lens is a fantastic companion for the Canon 60Da, as it offers a useful “mid-range” focal length for a variety of deep-sky projects. This includes everything from the rich star fields of Sagittarius, to a complete look at the Andromeda Galaxy. 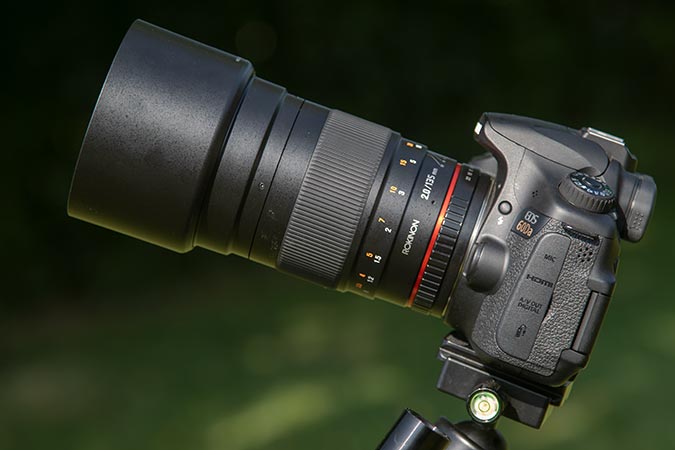 This is a prime (fixed focal length) telephoto lens with an impressive maximum aperture of F/2. Not only does this lens let in plenty of light to the sensor of the 60Da, but it also produces flat, chromatic aberration-free images.

In some parts of the world, this lens is branded as the “Samyang 135mm F/2”, which is the exact same lens mechanically.

The William Optics RedCat 51 refractor telescope is an excellent companion to the 60Da. This telescope is as close to a camera lens as I have ever seen and shoots at an impressive 400mm focal length when paired with the crop-sensor Canon 60Da body.

Here is a look at the Andromeda Galaxy captured using the Canon 60Da and RedCat on a Sky-Watcher Star Adventurer Pro. 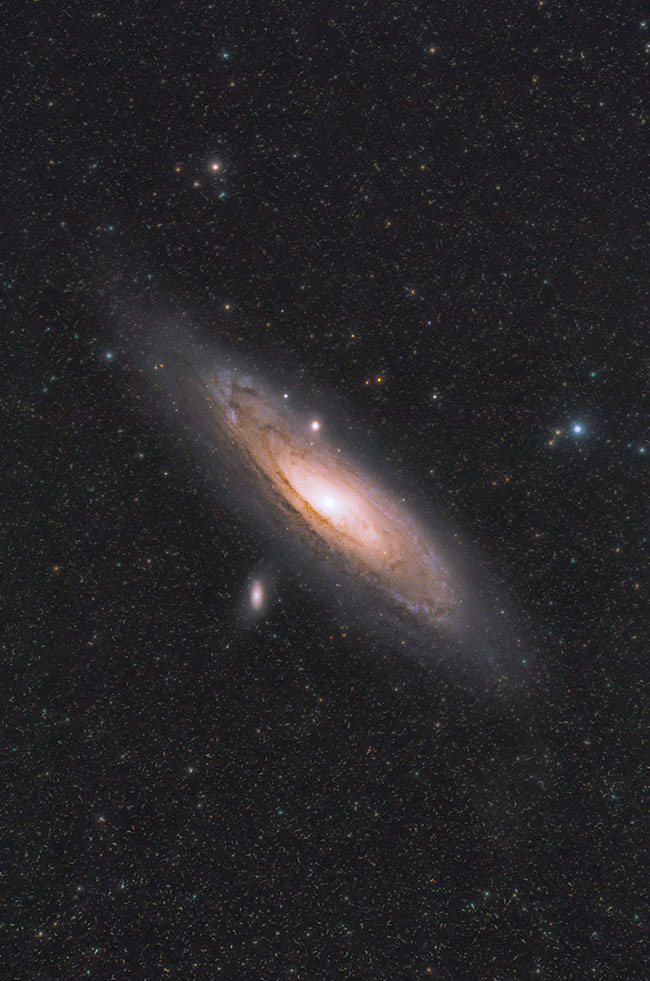 Nikon jumped on the astrophotography bandwagon, too. In 2015, they released the impressive full-frame Nikon D810A. The marketing material for this camera makes some bold claims, including being able to take noise-free images at ISO levels as high as 12,800.

“Noise-free” is a little hard to believe, but I have seen some incredible images taken with the Nikon’s dedicated astro-camera.

Once again, Jerry Lodiguss has put together an extensive review of this camera for astrophotography purposes on his website. It is interesting to note that he has stated “The low thermal signal and astro noise reduction feature in the Nikon software work so well that you won’t really need to shoot dark frames anymore under reasonable temperatures!” 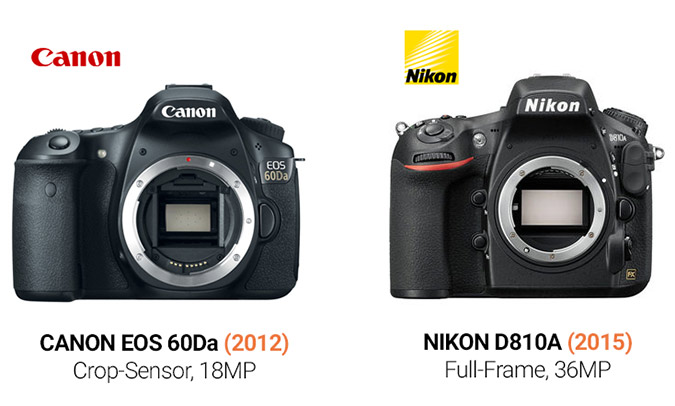 Is it Suitable for Daytime Shooting?

Just like my modified Canon EOS Rebel Xsi, the 60Da is not suitable for normal, daytime shooing. That’s the official word from Canon, but several people have told me that the 60Da is a useful daytime photography camera as well.

Canon’s marketing material mentions that achieving a proper color balance may not be possible. I put this to the test myself, taking a number of shots in the backyard using auto white balance. Here are the results: As you can see, the image appears almost normal, but there is an odd tint to the photo overall. This is no doubt due to the increased sensitivity in IR. I’ve heard that the effect is even more pronounced when photographing skin tones, although I did not turn the camera around at myself to test this.

I am sure it’s possible to correct these odd color hues in post-processing, or by setting a custom white balance. However, I wouldn’t recommend investing in a 60Da is your all-purpose DSLR camera.

Why I Love this Camera

You may be wondering why I care about the Canon EOS 60Da if I already own astro-modified DSLR cameras and dedicated astronomy cameras? The answer is simple, the 60Da is the official astrophotography DSLR camera made by one of the oldest and well-respected camera companies in the world.

Yes, modification services are a great option, and in some tests, these cameras even out-perform the Canon 60Da in terms of sensitivity to certain nebulae targets. However, I like the thought of using a camera that was designed to spec, and that has not been taken apart by a third-party source.

The Nikon D810A appears to be an obvious upgrade over the older, crop-sensor 60Da, but I’m a Canon guy. All of my lenses are Canon, and I plan on sticking with the brand for a long time.

I think it’s pretty cool that Canon realized that their customers were using Canon camera bodies for astrophotography and that they created a camera just for us. Most of my reasons for wanting the Canon EOS 60Da are for collector purposes.

Can you blame me? Just look at this old advertisement for the 60Da: 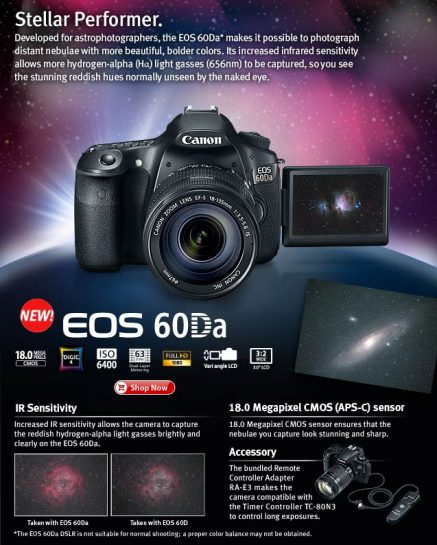 To me, this camera is the ultimate collector’s item. Sure, modifying a standard Crop-Sensor DSLR (even the original Canon EOS 60D) with the full spectrum modification will collect even more signal in the h-alpha emission line, but it still won’t have that little “a” on the body. 🙂 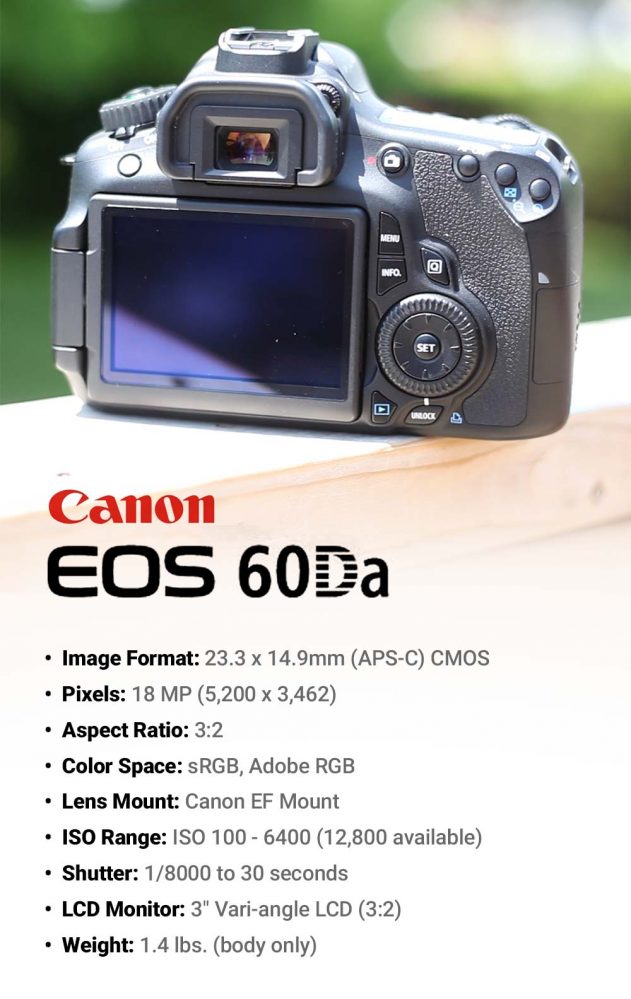