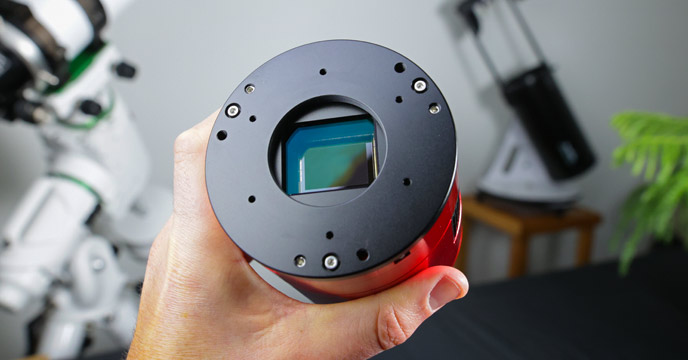 This camera uses a highly sensitive, cooled, monochrome CMOS sensor in the APS-C format. The size and resolution of this sensor is its biggest selling feature.

The ZWO ASI2600MM Pro not only improves on nearly every aspect of its predecessor (the ASI1600MM), the sensor is now APS-C, capturing a larger field of view. In the land of deep space astronomy cameras, the APS-C sensor size is said to be “the sweet spot”, balancing a large field of view with a practical size for demanding optical systems.

If you are thinking about purchasing your first monochrome camera for astrophotography, this would be an excellent choice. It is well supported, features some of the best camera specs in the industry, and is a practical system for a wide variety of telescope configurations. 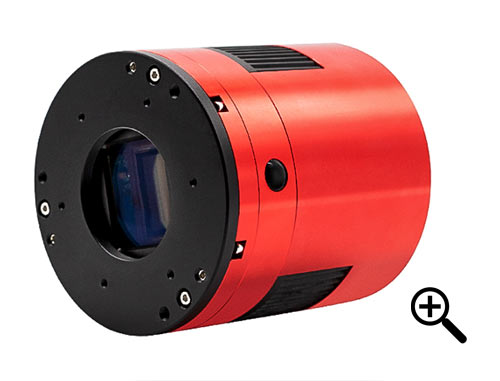 Due to its impressive specs and versatility, I believe the ZWO ASI2600MM Pro mono will be one of the most popular cameras for astrophotography in 2021, and beyond. ZWO sent me an early version of the ZWO ASI2600MM Pro to test in my backyard, and report my results. I was not compensated in any way to review this camera, nor was I given any directions of what to talk about. 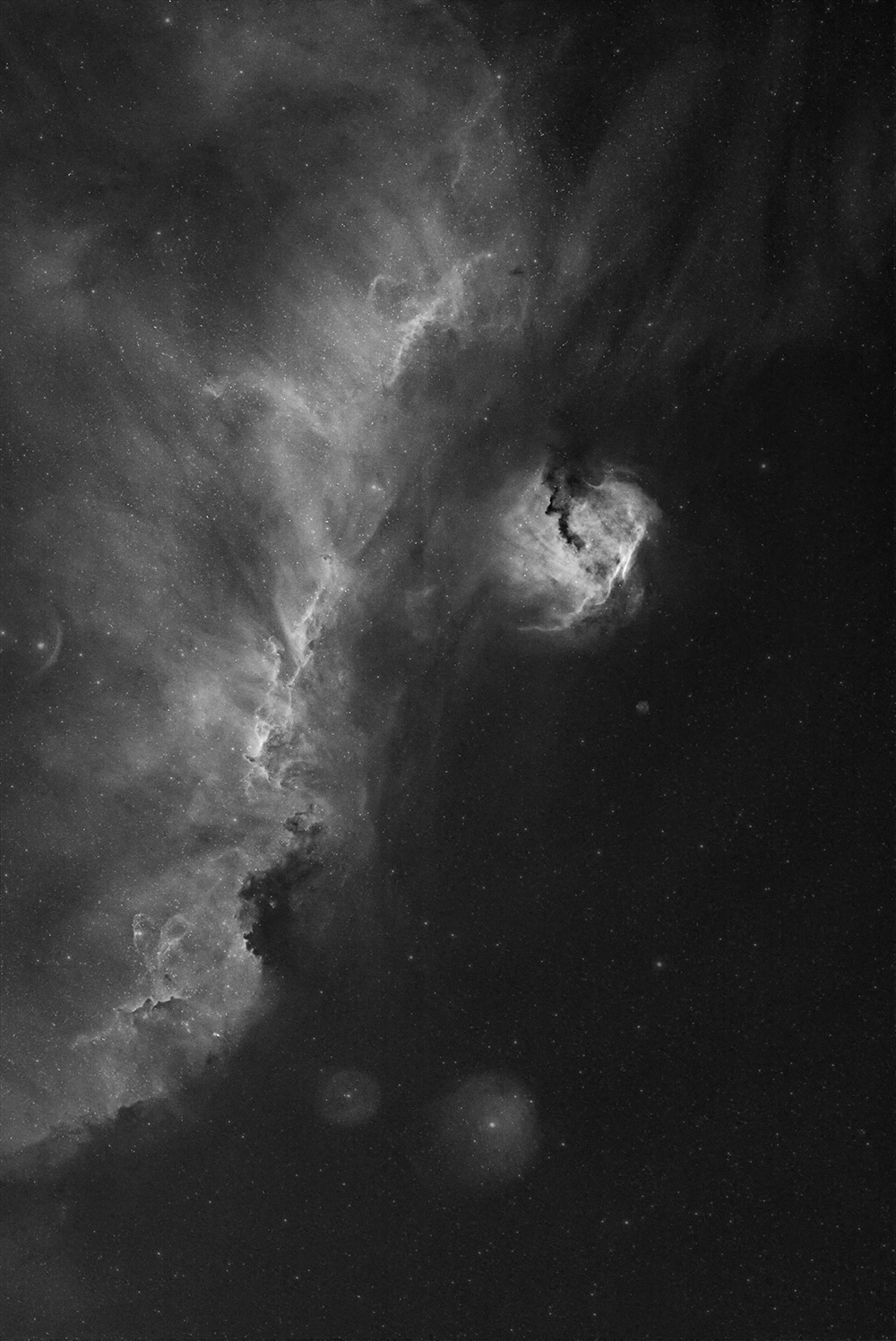 The ZWO ASI2600MM Pro is a lightweight, cooled CMOS astrophotography camera that specializes in deep-sky imaging. This camera shares some features with its ASI1600MM counterpart but there are many upgrades to the 2600MM Pro including; a higher image resolution, a back-illuminated sensor, built-in dew heater, higher full well depth, and quantum efficiency.

In fact, the well depth of the 2600MM Pro is more than twice that of the ASI1600 (50K vs. 20K), and the quantum efficiency is rated to be an impressive 91%. This is the highest QE CMOS camera I have ever used for deep-sky astrophotography. 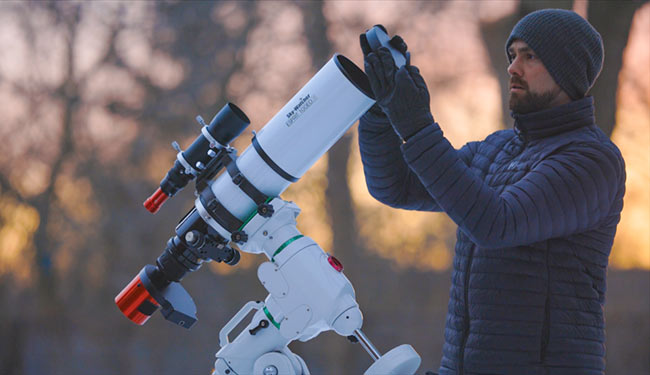 OPT Telescopes shared this video about this camera in early February, and it does a great job of explaining the key specifications of the camera.

As with other monochrome cameras, filters are needed with the ASI2600 to produce a full-color image. Many will use this camera for narrowband imaging, but this astronomy camera would make an excellent LRGB imaging workhorse as well.

A power cable is needed for powering the cooling system that will control the sensor temperature and help to reduce noise in your image. If you are looking for a suitable power supply for the ZWO ASI2600MM Pro, I recommend using a 12V 5A AC/DC adapter as described on the ZWO website. 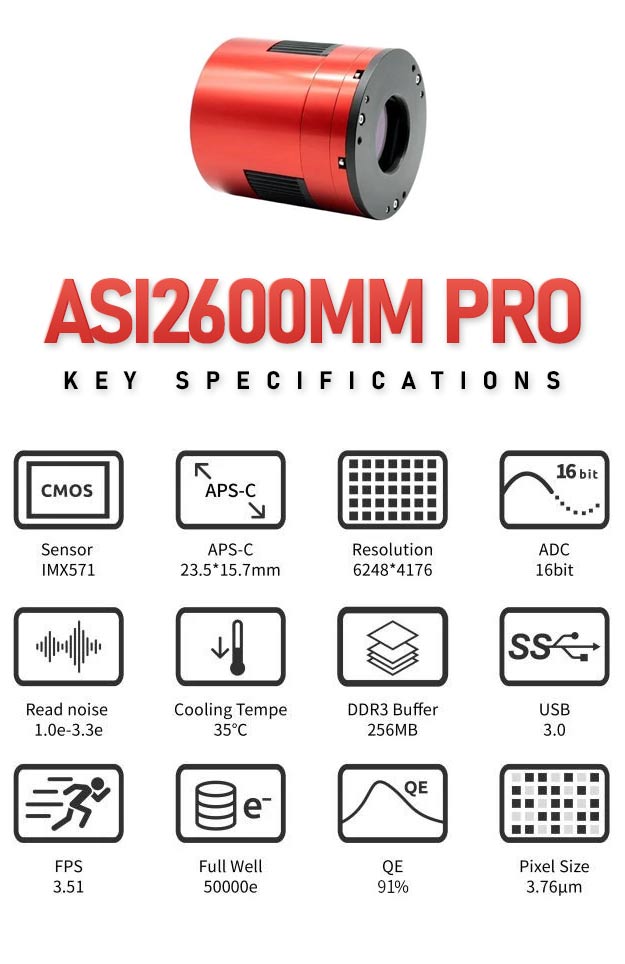 The 2600MM Pro camera features a 26-megapixel sensor that provides a wider/larger field of view with increased dynamic range to deliver clear, crisp images. Another feature of the 2600MM Pro sensor is the back-illuminated sensor. This helps to reduce noise and eliminate amp glows produced by weak infrared light that appear in the corner of uncalibrated images.

You can calculate the pixel scale of your camera system by combining this value (3.76), and your telescope’s focal length. The ideal range is about 2.0 for a well-sampled image, but this is only a general rule of thumb based on optical seeing conditions. 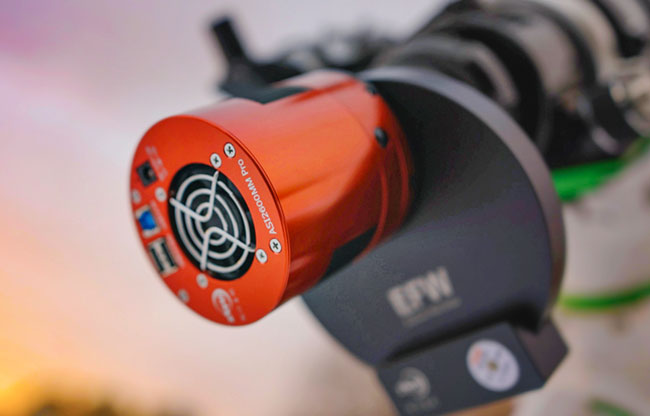 The ASI2600MM Pro mono is noticeably larger and heavier than my ASI294MC Pro and ASI533MC Pro.

Full Well depth (along with bit depth), give you a better dynamic range, allowing you to take longer exposures before data clipping occurs and avoid unwanted light and bloated stars. The 2600MM Pro has a full well depth of 50,000 e which is more than double that of the ASI 1600MM Pro.

The full well capacity of a camera (sometimes called pixel well depth or just well depth) is a measurement of the amount of light a photosite can record before becoming saturated, that is no longer being able to collect any more.

Quantum Efficiency (QE) and read noise are the most important aspects of a dedicated astronomy camera. QE can be summarized as the percentage of light that hits the sensor and gets recorded into the final image.

A high QE and low read noise are critical for improving the signal-to-noise ratio (SNR) of an astrophotography image.

The ZWO ASI2600MM Pro boasts an impressive QE peak value of 91%, which is even higher than the QE peak for this camera’s color counterpart (6200MC Pro).

The 2600MM Pro records and converts 91% of the light hitting the sensor into a usable image which is 31% more light than the 1600MM Pro.

Read noise is the noise created by the camera and includes pixel diode noise, circuit noise, and ADC quantization error noise. Essentially, the lower the read noise of your camera, the better.

The Read Noise of the ASI2600 is extremely low when compared to a traditional CCD camera. The ASI2600MM also includes a built-in “HCG mode”, which helps to reduce read noise at high gain while retaining the wide dynamic range for this camera as at low gain.

The best gain setting for the ASI2600MM Pro will depend on your astrophotography target. You’ll want to set the gain lower for a higher dynamic range (longer exposure) or set the gain higher for lower read noise in a shorter exposure project or lucky imaging.

A strong signal in a long exposure image will overcome read noise, and the calibration process of subtracting dark frames and bias frames will help correct this even further.

The 2600MM Pro also includes a built-in dew heater that fits in the protective window of the camera to combat dew or ice and keep condensation off your sensor.

The dew heater can also be turned off at any time should you not want to use this feature or to save power.

The 2600MM Pro includes a protective window in front of the camera sensor. The window is 60mm in diameter and 2mm thick.

Keep in mind that this is an AR (anti-reflective) coated filter, while ASI2600MC Pro (color) uses an IR CUT filter.

The 2600MM Pro is designed with a two-stage cooling system that can cool the camera sensor below 35°C reducing sensor noise and exposure time.

ZWO recommends that you use a 12V @ 3A DC adapter to power the cooling. The exact connection for power on the camera is 5.5mm x 2.1mm (center pole positive). A 12V 5A power adapter is a common choice, and what I personally use.

The 2600MM Pro has 16-bit ADC and can achieve a dynamic range output of 14 stops to improve sharpness and contrast while allowing for smooth color transitions with gradients.

Since the 2600MM Pro has a larger sensor and bit depth it is not able to record data as quickly at only 3.5 frames per second. This is one noticeable advantage of the 1600MM Pro, which may be better suited for recording planetary data or video that you plan on stacking.

This camera supports custom ROI readout modes, which allow for faster frame rates at a smaller resolution. The ZWO ASI2600MM Pro can shoot a whopping 51 FPS when shooting at a tiny 320 x 240 resolution. 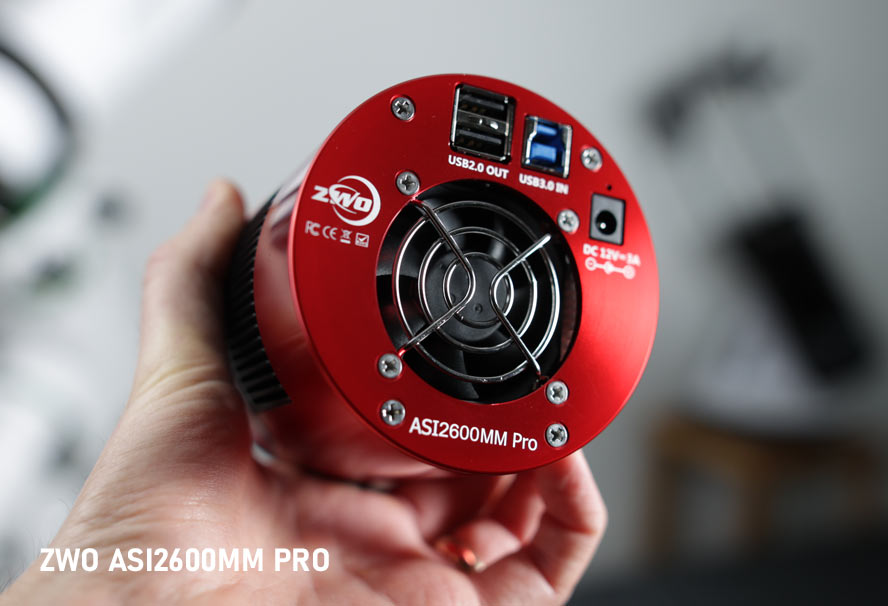 The cooling fan and connector ports at the back of the camera.

The 256MB DDR3 memory buffer inside of the camera helps manage a stable transmission of data from the camera to your computer.

The ASI2600MM Pro is a monumental upgrade from the aging ASI1600MM Pro in every key category. Notable improvements are in quantum efficiency, well-depth, and overall resolution.

Please see the comparison chart below for a complete overview:

Configurations and Back Focus

As with any dedicated astronomy camera, reaching the ideal back focus is critical to maximizing your results. Thankfully, ZWO provides a detailed back focus guide to achieve the recommended 55mm back focus of the ZWO ASI2600MM Pro.

I will be using this camera with a ZWO 8-position filter wheel with 36mm filters. This adds 20mm of spacing to the camera configuration, and I will need to keep that in mind when building the imaging train. 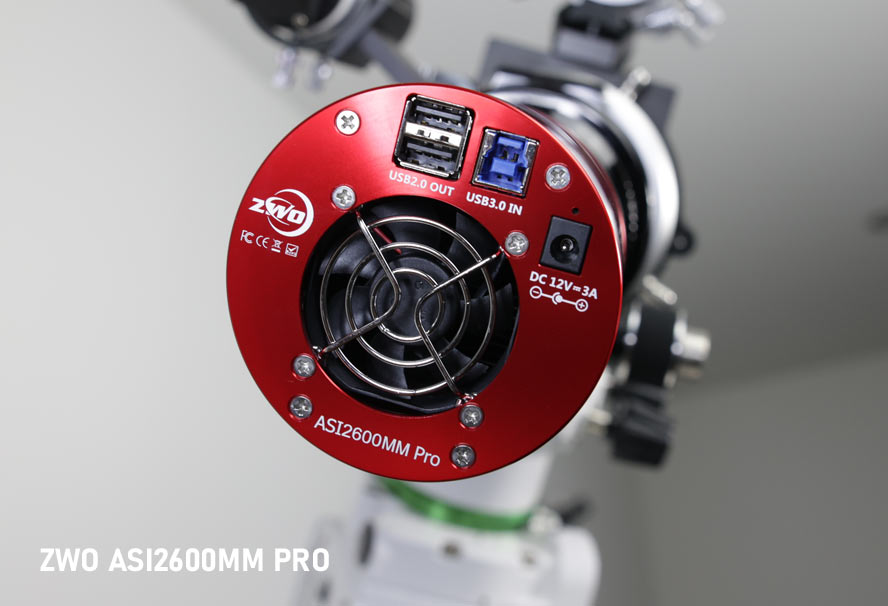 The camera attached to my Sky-Watcher Esprit 100 refractor telescope.

For now, I have the ZWO ASI2600MM Pro attached to my telescope using a 2″ filter slider drawer and a 16.5mm adapter. This allows me to insert 2″ round mounted filters into the imaging train until my new set of narrowband filters arrives.

My current backspacing configuration of the ZWO ASI2600MM Pro.

I have the camera attached to my Sky-Watcher Esprit 100 APO to enjoy a wider field of view than I am used to with this telescope. The camera system threads directly to the dedicated field corrector (M48 threads) of the telescope.

A notable change in backspacing between the ASI1600MM and the 2600MM is the depth of the sensor from the front of the camera body (17.5mm). Those upgrading from the ASI1600 will need to keep this in mind when building out the new system.

This camera also includes a tilt adjustment feature, which can be adjusted by using the 3 sets of screws found on the black flange of the camera. I would not recommend changing the factory tilt of the camera flange unless you are sure that there is a tilt issue in your optical train.

I will be controlling my ASI2600MM Pro using Astro Photography Tool via the ZWO drivers. The ZWO website includes an extensive list of camera drivers for all of their dedicated astronomy cameras.

The latest ASI Cameras driver must be installed on your computer first, and then the ZWO ASCOM driver that supports all ZWO cameras, the EAF (electronic automatic focuser), and EFW (electronic filter wheel).

You can also read the full ZWO ASI2600MM Pro manual online which includes detailed performance graphs of the camera including the QE curve, dynamic range, and read noise.

Included Items with the Camera

The reason the ZWO ASI2600MM Pro is such a practical choice for deep space astrophotography is the sensor size. If you have owned dedicated astronomy cameras in the past, chances are the sensor was smaller than APS-C.

For comparison, the ZWO ASI1600MM Pro has a micro 4/3 sensor, which is useful in most situations. However, you may find that a sensor of this size crops the field too much, and sacrifices the native focal length of your telescope.

I don’t know about you, but I would always take a little extra real estate on the camera sensor to collect larger deep sky objects in a single frame.

Creating mosaics will be less common with this camera because you can gather so much sky in a single frame. Pair this camera with a short focal length refractor like the William Optics RedCat or Radian Raptor 61, and you’ll be photographing entire regions of nebulosity in the sky.

The resolution of this sensor is incredible. I have enjoyed the small 3.76 micron pixel size of the QHY268C, and I am thrilled to now be able to shoot in monochrome with the ASI2600MM Pro.

Speaking of QHY, they too have a monochrome version of this sensor in the QHY 268M. This provides an alternative to the ZWO version for QHY fans looking for an affordable monochrome CMOS camera that delivers big results.

The ZWO ASI1600MM Pro was one of the best-selling astronomy cameras ever, and for good reason. Some of the best amateur astrophotography images I’ve ever seen were captured using that camera.

I believe the 2600MM Pro is poised to replace this camera’s prestigious position, and become a pivotal product in the astrophotography community.

The ZWO ASI2600MM Pro is roughly twice the price of the ZWO ASI1600MM. I think it is priced correctly for the long list of improvements over the aging ASI1600MM Pro. 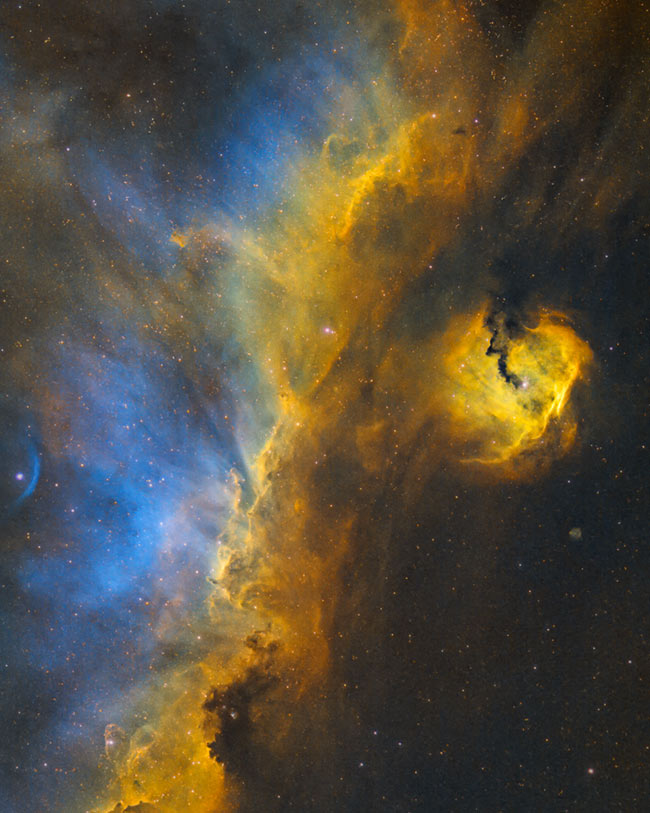