M16 (Messier 16) is known by amateur astronomers and astrophotographers as the Eagle Nebula.

This well-observed area of the night sky is a large cloud of gas and dust where new stars are born.

When you take a look at the wispy glow of this nebula through an astronomical telescope or binoculars, you are witnessing a stellar object that is approximately 7000 light-years away.

The newborn stars in the Eagle Nebula are very hot, which illuminate M16’s hydrogen gas as seen in the Pillars of Creation, made famous by the Hubble Space Telescope.

These intense pillars are slowly evaporating under the intense glare of the nearby massive, newborn stars.

The Pillars of Creation appear relatively small within the nebula itself, but in actuality, they are larger than our entire solar system. 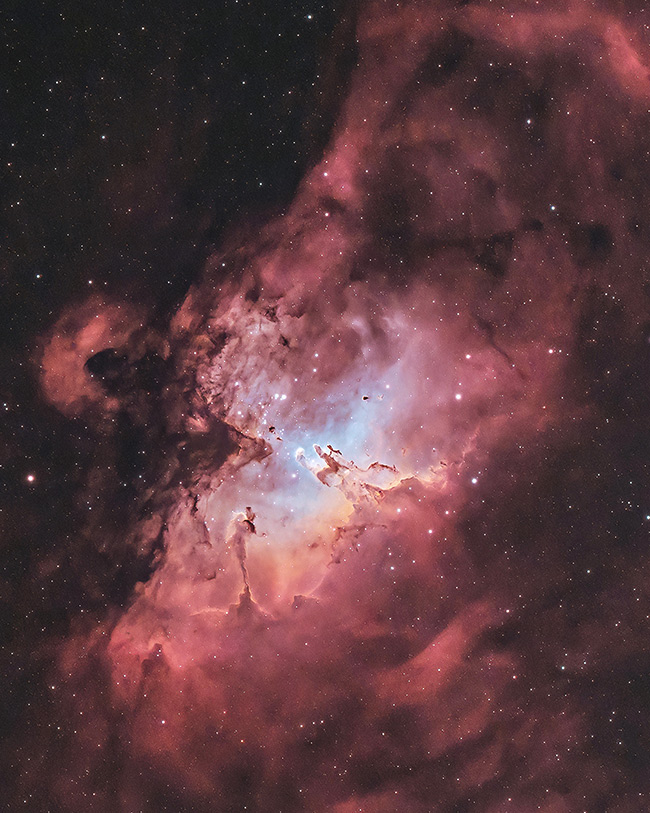 The Eagle Nebula is a bright (magnitude 6.2) emission nebula in the constellation Serpens. From mid-northern latitudes, it reaches an apparent altitude high enough in the southern sky for visual observation, or photograph.

It contains several active star-forming regions of gas and dust, and is one of the brightest nebulae in our night sky. “The Eagle” can easily be identified in long-exposure images of the Milky Way like the one shown below. 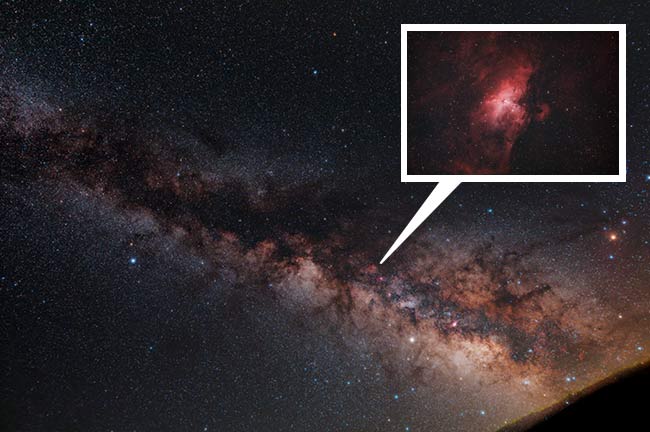 The location of the Eagle Nebula in our night sky

As is the case with all deep-sky astrophotography targets, the key to a successful image of the Eagle Nebula is an adequate amount of integration time for a healthy signal-to-noise ratio.

The image above was captured using a DSLR camera and wide-angle camera lens on the iOptron SkyTracker Pro camera mount. This dramatic portrait of the Milky Way was possible thanks to the exquisite dark skies (Bortle Scale Class 3) of Cherry Springs State Park in Pennsylvania, USA.

For those using a GoTo equatorial telescope mount, you’ll land on the Eagle Nebula by punching in M16, or NGC 6611 to the keypad of the hand controller. NGC 6611 designates the embedded star cluster associated with this nebula containing many hot, blue stars.

The Omega Nebula (M17) sits just below the Eagle Nebula, in a separate constellation, Sagittarius. M17 (also named the “Swan Nebula”) is another H II  region of the night sky and is equally as stunning and beautiful as M16. As you can imagine, this is a dense and populated area of the night sky, and one that amateur astrophotographers spend a lot of time photographing.

Location & Best Time to See it

From mid-northern latitudes, the best time to look for the Eagle Nebula is from June – September. Below, you will see an image that shows the location of the Eagle Nebula at nightfall in June. By September/October (from this latitude), this nebula sits high into the southwest at nightfall and quickly fades into the horizon as the night progresses. 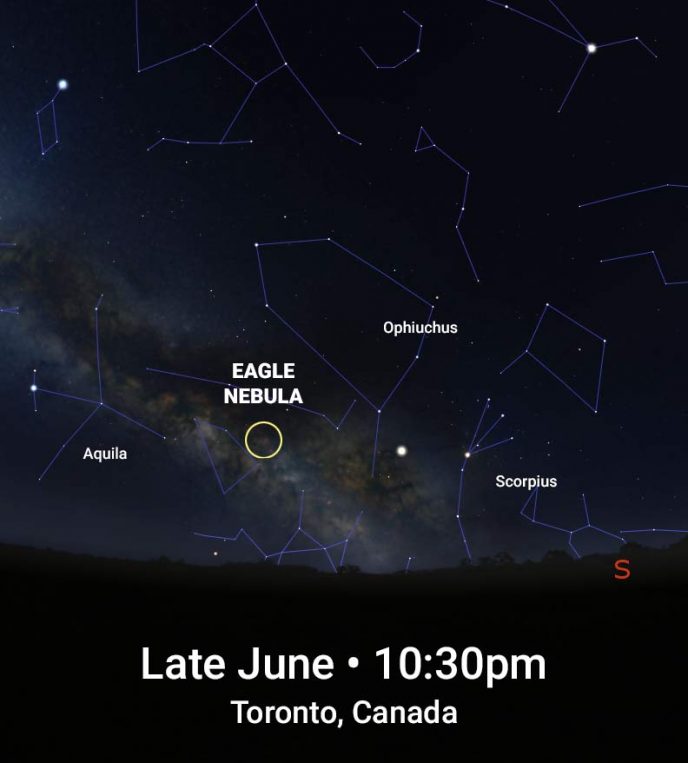 The location of the Eagle Nebula from mid-northern latitudes.

Unlike the northern constellations that are visible at all times of the year, Serpens and the Eagle Nebula offer a rather short window of opportunity for viewing.

The Pillars of Creation

In 1995, the Hubble Space Telescope captured one of the most iconic images of all time, the “Pillars of Creation”. I remember seeing this image as a child and it captivated my imagination. I never thought that I would one day photograph this region of space myself.

This is one of the most productive regions of active star formation in the night sky. Stars are forming inside of the massive pillars of gas and dust, and are being sculpted by the powerful winds of the young, energetic stars within M16’s cluster. 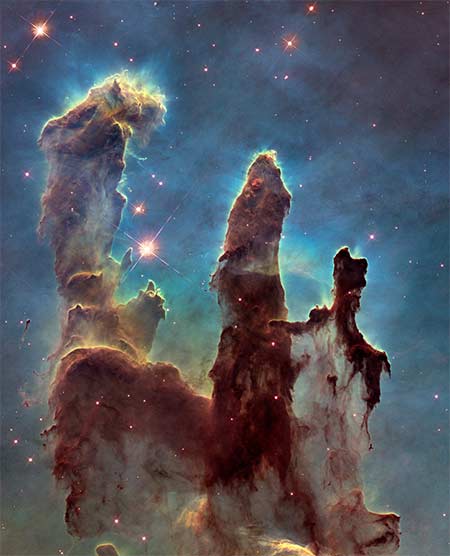 The “Pillars of Creation” – NASA, ESA, and The Hubble Heritage Team (STScI / AURA).

“Stars are forming deep inside the towering structures. The light-years long columns of cold gas and dust are some 6,500 light-years distant in M16, the Eagle Nebula, toward the constellation Serpens. Sculpted and eroded by the energetic ultraviolet light and powerful winds from M16’s cluster of young, massive stars, the cosmic pillars themselves are destined for destruction.”

The Eagle Nebula isn’t the only emission nebula with an embedded star cluster within it, not even close. Some other famous H II regions include the Orion Nebula, the Lagoon Nebula, and the Omega Nebula. 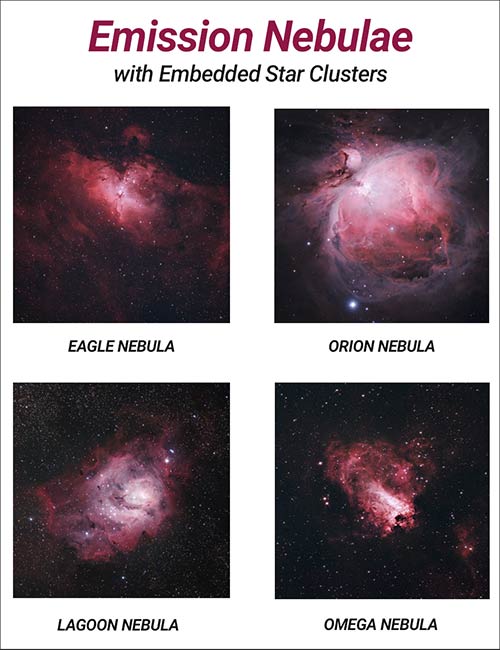 The Eagle Nebula resides in the constellation Serpens, which translates to “the serpent” in Latin. Serpens is a unique constellation because it is the only one that splits into two parts. Serpens Cauda (tail), and Serpens Caput (head). It stretches all the way around Ophiuchus and is best visualized on star map with constellation art. 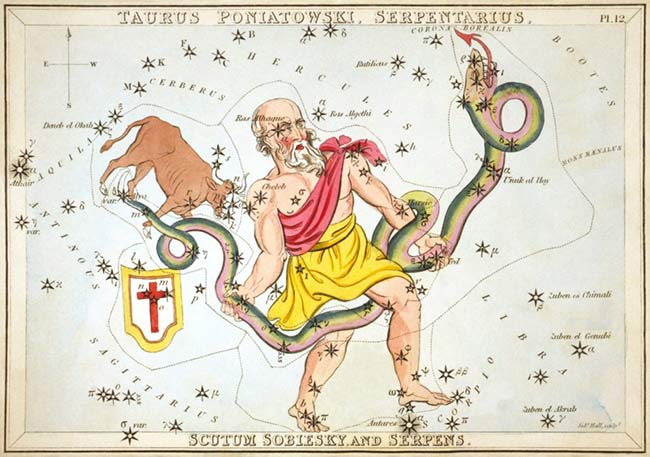 An illustration from 1825 depicting Serpens and Ophiuchus.

The Eagle Nebula sits in Serpens Cauda, the snake’s tail. This constellation is also home to Messier 5 (NGC 5904), a bright globular cluster lying approximately 24,500 light-years from earth. Not too far below, you’ll find the Omega Nebula, in an entirely new constellation, Sagittarius.

The following photo shows just how close M16 is to M17. This photo was taken by Greg Turgeon using a William Optics RedCat 51 refractor telescope, and a monochrome dedicated astronomy camera. You can follow Greg’s incredible astrophotography work on Instagram. 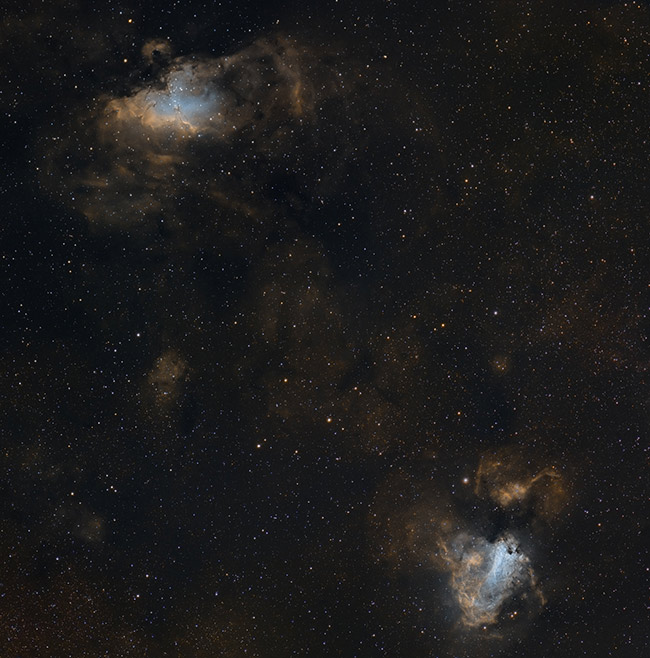 The Eagle Nebula and Omega Nebula lie very close to each other from our perspective on Earth.

Both the Eagle and the Swan lie along the Sagittarius spiral arm near the center of our Milky Way galaxy. For a better idea of the scale of these objects, the extended wings of M16 spread nearly 120 light-years wide, while the Omega Nebula (or Swan Nebula) spans 30 light-years across.

Capturing the Eagle Nebula with a DSLR and Telescope

As far as deep-sky astrophotography targets go, the Eagle Nebula is quite big and bright. With an apparent magnitude of +6.2, even a short 30-second exposure enough to start recording the intense glow of the core. It’s also a fine visual observation, even under moderately light-polluted skies.

The image featured at the top of this page was captured using a one-shot-color camera under Bortle Scale Class 8 skies.

From the city, you can expect to capture about 1-2 hours’ worth of integrated exposure time before revealing the faint details of the outer nebula regions. This target tends to “grow” as you add more and more exposure time. (A narrowband h-alpha filter will also help).

In the following video, you’ll see me set up my telescope and computerized equatorial mount at a dark sky site. I cover some of the basics of deep-sky imaging through a telescope and share my final image of the Eagle Nebula at the end. When it comes to astrophotography, there is no substitute for dark skies.

The best image I’ve managed to capture of the Eagle Nebula was in my backyard, using a cooled one-shot color camera. I used a ZWO ASI294MC-Pro to collect 32 x 6-minute exposures through a William Optics FLT 132 refractor telescope, using a duo-narrowband filter.

The extra light-gathering power a refractor telescope with a large aperture like the FLT 132 provides is beneficial when photographing faint deep-sky targets. This is a rather large and heavy telescope, which meant I needed a robust equatorial mount to track the apparent movement of the night sky. For this task, I employed the iOptron CEM60 Center balanced equatorial mount. 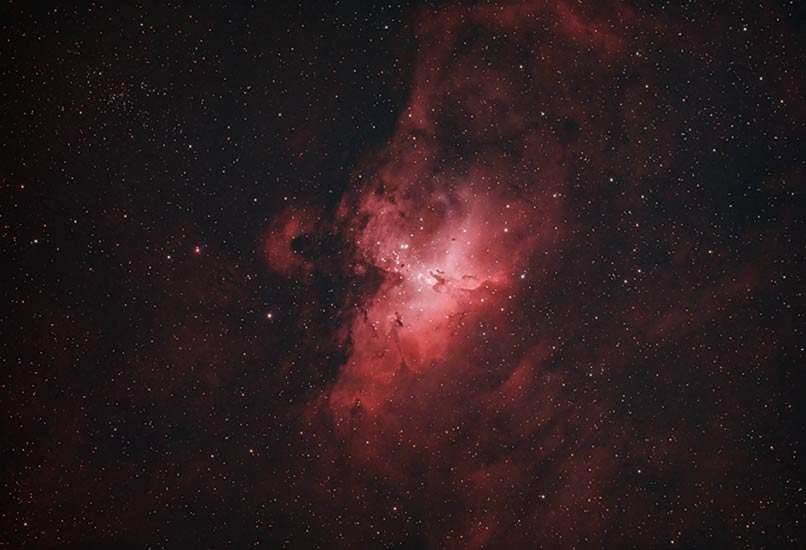 View the full-size version on Astrobin

I’ll admit, most of the signal (light) emitted from M16 is in the Hydrogen Alpha wavelength on the spectral graph, so the OIII data likely did not add much to the detail of the image. With that being said, however, this filter has a way of producing a rather natural looking photo in narrowband – straight out of the camera.

The camera used to capture the image above utilizes a cooled CMOS sensor with TEC. Although this is beneficial for capturing long exposure images with very little thermal noise, a stock DSLR camera is more than capable of photographing this nebula. A modified DSLR will help reveal the rich red colors of the hydrogen gas in this nebula, as a stock camera’s IR filter will block this light wavelength.

The photo of Messier 16 below was captured using an astro-modified Canon Rebel Xsi (450D) DSLR camera and a 102mm refractor telescope. 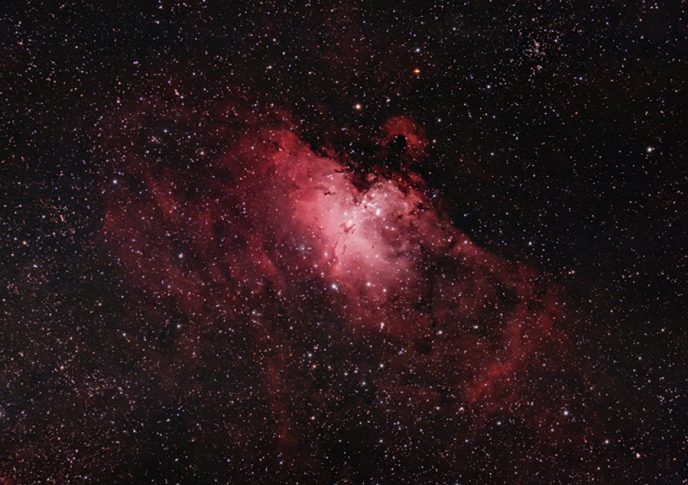 The Eagle Nebula in Hydrogen Alpha

Capturing the Eagle Nebula in Ha will uncover an impressive amount of bright hydrogen gas in the nebula. A filter such as the 12nm Astronomik Ha filter reduces the size and brightness of the overwhelming surrounding stars and brings the delicate structure of this nebula forward.

Creating an HaRGB composite of this object is a great way to highlight the beautiful glowing gas in M16.

To learn more about the clip-in DSLR ha filter I used to capture the Eagle Nebula in narrowband, see my post: How a DSLR Ha filter can improve your astrophotos 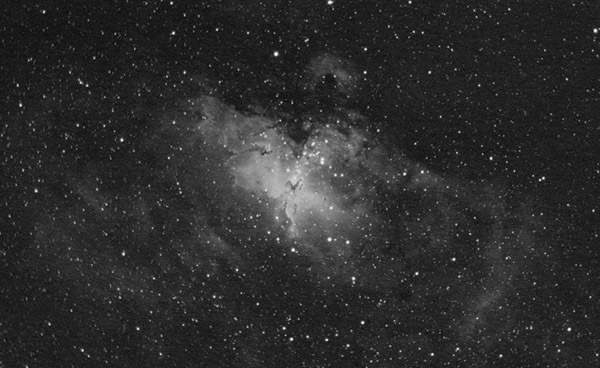