The Orion Nebula is one of the brightest nebulae in the night sky, and is visible to the naked eye. This magnitude 4 interstellar cloud of ionized atomic hydrogen contains a young open cluster of four primary stars known as the Trapezium.

The M42 nebula is part of a much larger nebula system known as the Orion Molecular Complex, which extends throughout the Orion constellation including objects such as the Horsehead Nebula, M78, and Barnard’s Loop. 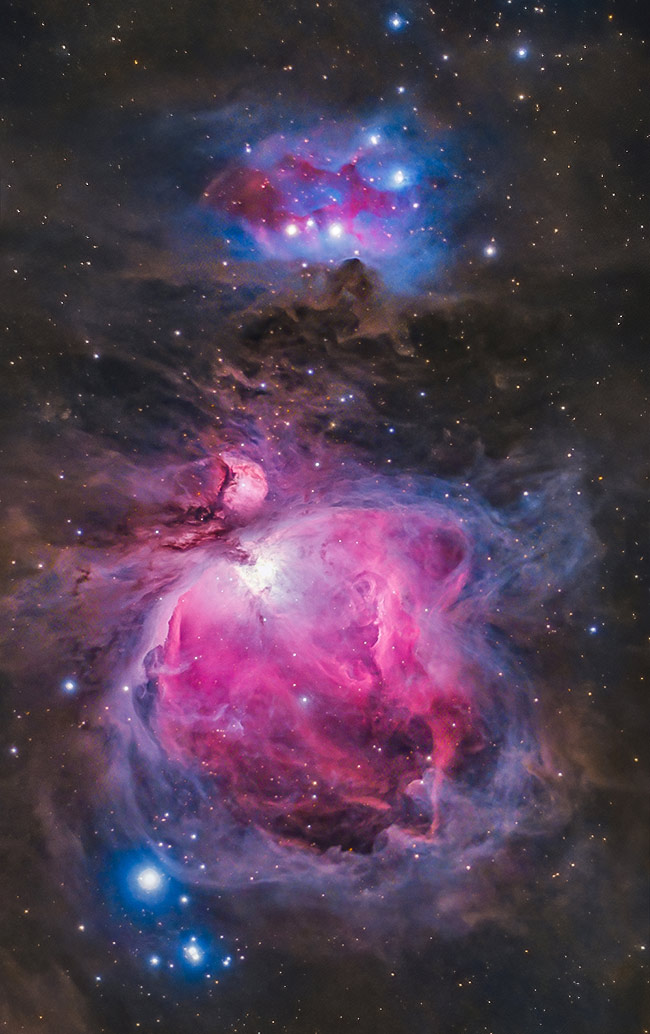 The mighty Orion Nebula is arguably the most spectacular deep sky object in the night sky. I sincerely hope that you have the privilege of observing M42 (Messier 42) through a telescope at some point during your life. You will never forget it.

In terms of astrophotography, it is one of the most gratifying deep sky objects you could ever photograph through a telescope. The rich glowing emission gas and reflected starlight of the Orion Nebula embody the breathtaking beauty of our Universe. 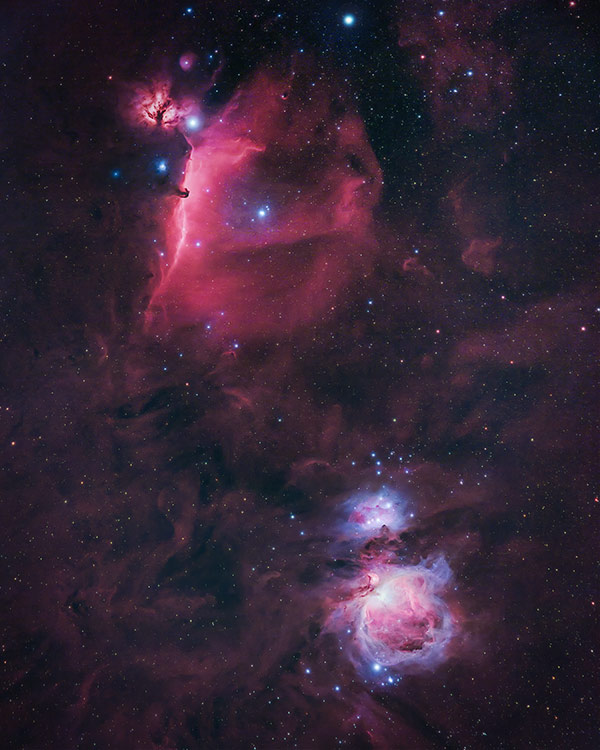 The Orion Nebula and Horsehead Nebula region photographed in a single frame (Raptor 61).

The Orion Nebula is so bright, that it is possible to observe it with the naked eye. With an apparent magnitude of +4, this glowing emission nebula/reflection nebula can even be enjoyed from locations with moderate light pollution.

You’ll find Messier 42 in the “Sword” of the Orion constellation, which are the 3 stars located south of Orion’s Belt. It may look like just another “star” at first, but a closer look (even without the aid of binoculars) will reveal a fuzzy patch.

This diffuse nebula is estimated to be about 24 light-years across and is the closest region of active star formation to Earth. Over the years, I have photographed Orion using countless cameras, telescopes, and camera lenses. Since 2010, I have dedicated some time to photograph the Orion Nebula (and Constellation) when the Hunter returns in the fall. 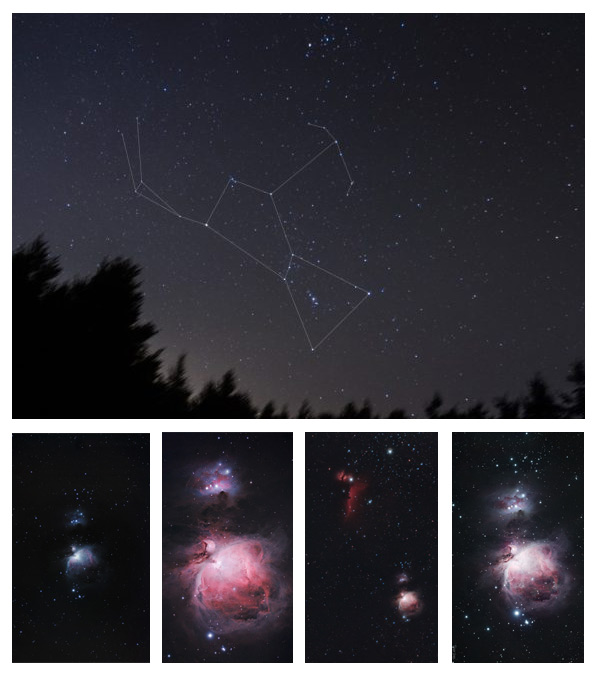 How to Find the Orion Nebula

Orion is one of the easiest constellations to identify in the night sky. “The Hunter” formation of stars is unmistakable, even from the city. Orion’s Belt is the most striking feature of the formation, 3 bright stars in a row that create an imperfect line. The intensely red star at the upper left of Orion should also stand out. Betelgeuse is a red supergiant, and one of the largest stars visible to the naked eye.

On the bottom right of this star formation, is yet another extremely bright star, but this one shines blue-white. Rigel is the brightest star in the Orion constellation, and approximately 40,000 times brighter than our sun. The star factory affectionately known as the Orion Nebula can be found North of Rigel, in Orion’s Sword. Have a look at the star chart below for reference. 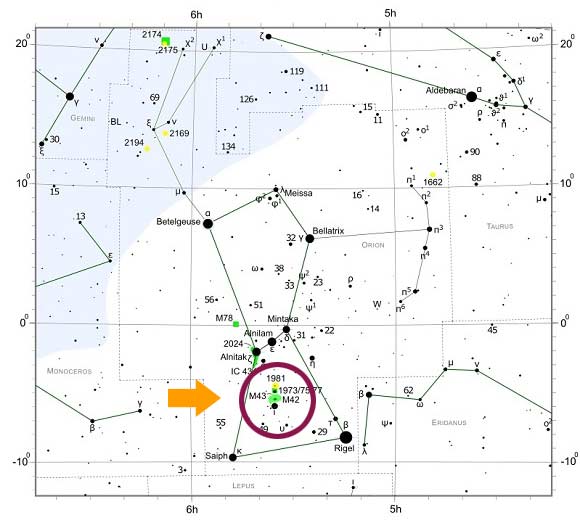 Star Map showing the Location of the Orion Nebula – FreeStarCharts.com

The seven primary stars that make up the distinctive hourglass-shaped asterism of Orion the Hunter are Rigel, Betelgeuse, Bellatrix, Saiph, Alnitak, Alnilam, and Mintaka. Nearby Canis Major is said to be Orion’s faithful dog. The brightest star in Earth’s night sky, Sirius, represents the nose of the dog.

Through a Telescope or Binoculars

If you’re lucky enough to own a telescope, aim it below the 3 belt stars of Orion towards his sword. Use your telescope’s finder scope to identify the fuzzy patch that sits between the three stars of Orion’s sword, and then hop back on the eyepiece for a wondrous sight. With enough aperture and good seeing, you should be able to spot out the Trapezium near the core of Orion. Look for a tightly packed collection of 4 stars.

Unlike many of the faint deep sky nebulae in the night sky, the bright Orion Nebula offers an impressive view for backyard stargazers in the city. I often take a look at M42 using a pair of 15 x 75 binoculars. I highly suggest observing Orion this way if you haven’t before!

The graphic below shows two astrophotography examples of the Orion Nebula captured using a DSLR camera. The amount of overall exposure time and the types of filters that were used can change the type of image you create dramatically. In the world of astrophotography, the more signal (light) you can collect, the better.

An equatorial tracking mount and a telescope (or telephoto lens) are required for a deep view of the Orion Nebula, but even short untracked shot will begin to show color. For tips on how you can begin to enjoy astrophotography with an entry-level camera right away, see: 7 Astrophotography Tips and Camera Settings.

This celestial masterpiece is the perfect target for beginners to try using a DSLR camera and telescope. The bright, impressive details are quite evident in short, unguided exposures. As you learn how to better capture and process your astrophotography images, your image of M42 will become more and more beautiful.

My first images of the Orion Nebula did not look like the version below. I had to better learn the art of capturing and processing astrophotography images, and it took time.

Using the right camera filter can impact the success of your image. From my Bortle Class 8 backyard, I rely on light pollution filters to help me capture natural-looking images under an urban sky.

For example, the image on the right was captured using a small refractor telescope and a stock DSLR camera. A broadband light pollution filter (Optolong L-Pro) was used to reduce the glow of my city sky while allowing the natural colors of this object and stars to shine through. 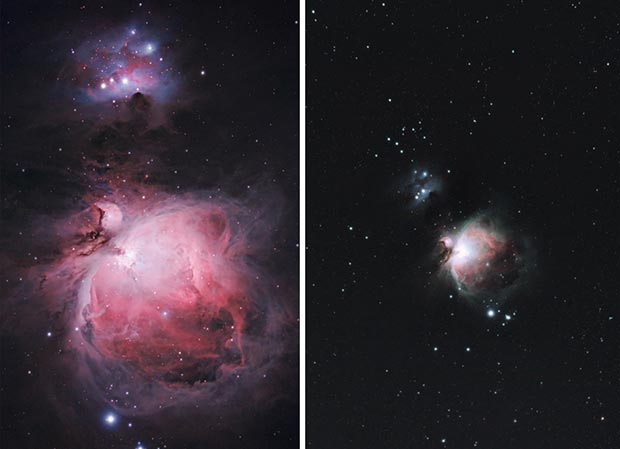 The image on the left includes narrowband hydrogen-alpha data, using a specialized filter. The original true-color data was combined with greyscale images shot using a 12nm Ha filter to produce a hybrid image that shows off the intense glowing hydrogen gas in the Orion Nebula and surrounding area.

Amateur photographers will often include the Running Man Nebula (NGC 1977) in the image as I have done in the past. For reference, I feel that a focal length of 400-600mm will offer the most impactful field of view for a large nebula like Messier 42.

A typical imaging session on M42 and the surrounding area will involve photographing several long exposure images that can later be registered and stacked to produce a final image with a healthy signal-to-noise ratio. I use a free software called DeepSkyStacker to pre-process all of my astrophotgraphy images.

Here are some recommended DSLR camera settings for the Orion Nebula through a telescope on a tracking mount: 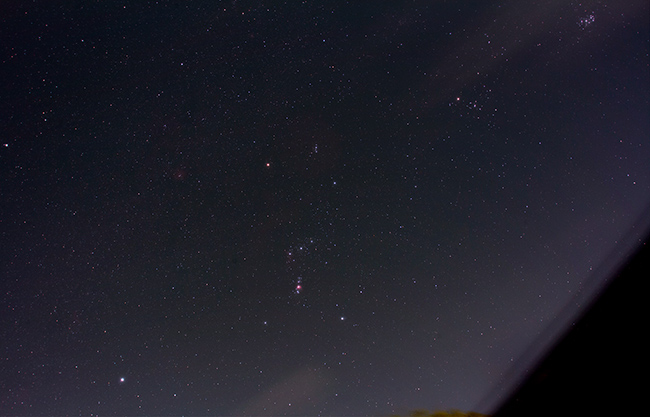 My view of Orion from a city backyard

If you are using a camera lens, set the lens’ f-ratio low (F/4 or below). The sharpness of the stars in your image will vary lens by lens, but in general, you want the lens to gather as much light as possible in a single shot. Fast lenses such as F/1.8 may benefit from stopping down to F/2.8 or F/3.2 for easier focus and a sharper image.

The bright core of the Orion Nebula may clip the highlight data in your image in exposures as short as 15-seconds. To create images of the Orion Nebula with a high dynamic range (HDR), photographers often capture short exposures of 5-10 seconds to capture the fine details near the Trapezium. These details can then be blended into the long exposure shots for a dramatic image.

Image processing is a completely different aspect of astrophotography from image acquisition. The Orion Nebula is an excellent test subject to practice your image processing skills on. For a detailed step-by-step image processing tutorial, you can follow along with the steps I take in Adobe Photoshop in the following post: 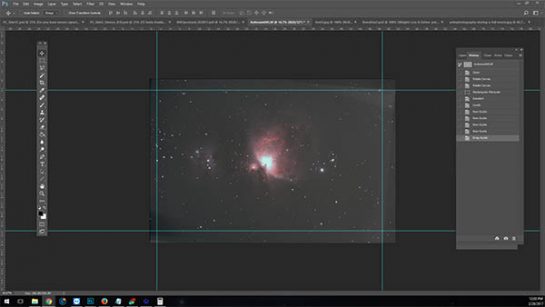 I have also created another tutorial that explains how to fix the bight core of Orion in Adobe Photoshop. To accomplish this, you can blend in a photo of the Orion Nebula captured using a shorter exposure length. By blending a shorter exposure image of the bright core, you can create an HDR version of Orion with more detail overall.

Which telescope to use?

The size of the Orion Nebula is well suited for many focal lengths, be it a telephoto lens or astrophotography telescope. The wide field of view offered by a compact refractor telescope will allow you to capture the entire M42 nebula, along with M43, NGC 1977 and many more interesting cataloged objects in this area.

For an example of the types of telescopes I have used to photograph M42 from my backyard, have a look at my top 5 choices for beginners.

A mid-range telescope like the Explore Scientific ED102 refractor is a superb choice for deep sky imaging. This telescope is responsible for many of the images in my personal photo gallery. An apochromatic refractor offers many advantages when photographing a target like M42 such as color correction, contrast, and clarity.

As with all of my astrophotos, it is hard for me to label a version of the image a “final”, as they are all a never-ending work-in-progress. However, if you want to share your photos with the world you must make a decision on a version you are happy with – no matter what stage it’s at. For all of my work on the Orion Nebula, the version below is probably my best attempt thus far:

The total integrated exposure time for this image was 2 Hours and 51 minutes. 57 separate exposures @ ISO 800 were combined using DeepSkyStacker to create a high-resolution .TIF file for processing. The stacked image was processed in Adobe Photoshop CC 2017.

Several shorter exposure sets were stacked separately and blended into the final image using layer masks. This is a common image processing strategy to use when “taming” the core of a bright nebula or galaxy.

By integrating data acquired using a clip-in DSLR Ha filter, I was able to add more of the faint nebulosity that surrounds M42. The broadband color images were combined with narrowband Ha data to produce an HaRGB composite.

(To learn more about this image-processing technique, have a look at my tutorial on HaRGB processing with Photoshop)

In the video, I collect light frames on this deep-sky object using a camera and telescope from my backyard. A typical imaging session on M42 involves shooting anywhere between 30-100 images on a single night.

In a post I made about using a camera lens for astrophotography, I collected light on Messier 42 and the surrounding area. This included interesting deep-sky objects like the Horsehead Nebula, Flame Nebula and Barnard’s Loop.

Even at this focal length (105mm), the Orion Nebula is an incredible sight. The photo below was captured using a Canon Rebel DSLR on an iOptron SkyTracker Pro camera mount. 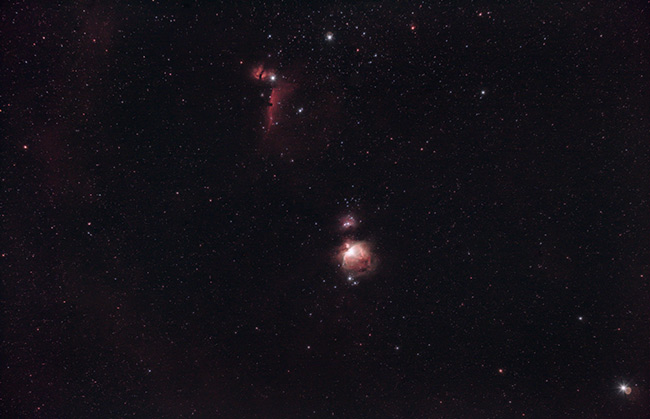 Several exposures in true-color RGB were stacked together to improve the signal-to-noise ratio of the final image. Narrowband H-Alpha data was also added to bring increase the intense glowing gas from these nebulae even more.

When to See it

From the Northern Hemisphere, Orion is due South and highest in the night sky at about midnight in the month of December. As the winter months pass, Orion will rise about 2 hours earlier each month. January and February are great months for adding the Orion nebula to your astrophotography target list.

Vibrant bright blues and pinks are revealed through long exposure photography and create a masterpiece of interstellar gas and dust.

The Orion Nebula was the first deep sky object I ever witnessed in color through photography. I used a point and shoot digital camera to image through the eyepiece of my Orion Skyquest Dobsonian back in 2010.

The result was a blurry smudge of purple light, and that was enough to spark my interest to level it’s at today. My early experiences photographing the Orion Nebula were the catalyst for a future lifelong obsession with astrophotography, and the night sky itself.

Through binoculars, a camera lens, or a telescope – the glowing molecular cloud known as the Orion Nebula never dissapoints. 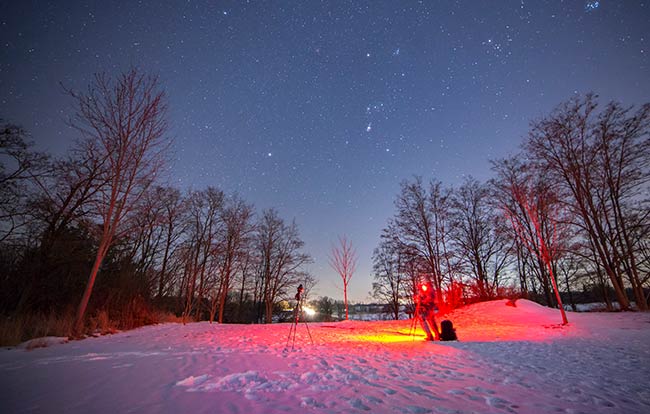