How Big is the Universe? 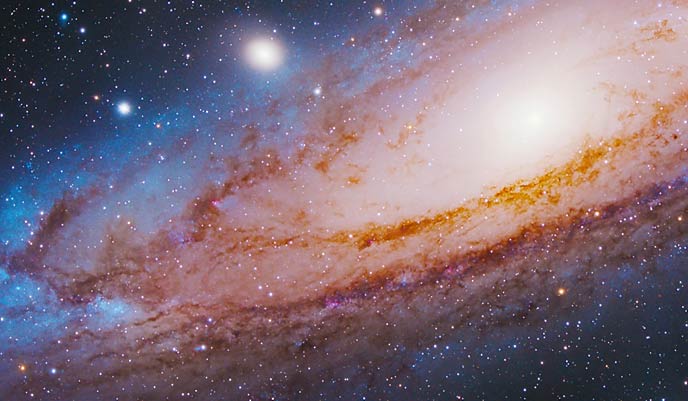 How Big is the Universe?

Humanity once believed that the night sky was the unilluminated sphere that enclosed Earth when the Sun was sleeping (which they thought traveled inside that sphere).

They imagined that the little pinpricks of light were bits of “heaven” showing through imperfections in the sky.

We got over that silly notion pretty quickly as people began to study the sky either for religious reasons, trying to apply some sort of sense to the existence, or more logically, to predict “growing seasons” and “time” so they could plan their civilization and survive.

Once we discovered that agriculture was possible, it became very important to know when the weather was going to be suitable for planting; when the Nile would flood; when the monsoons would arrive; and when killing frosts could wipe out your crops and doom your town, village, or city.

The stars just happened to be the most reliable calendar before widespread reading, writing, and mathematical abilities were common.

We started to acknowledge “planets” or “moving stars” with the discovery of planḗtai, a Greek word meaning “wanderers“.

Shortly after that, we began to consider that those other fixed pinpricks of light were other suns that were quite far away—but we had no idea how far away they were… 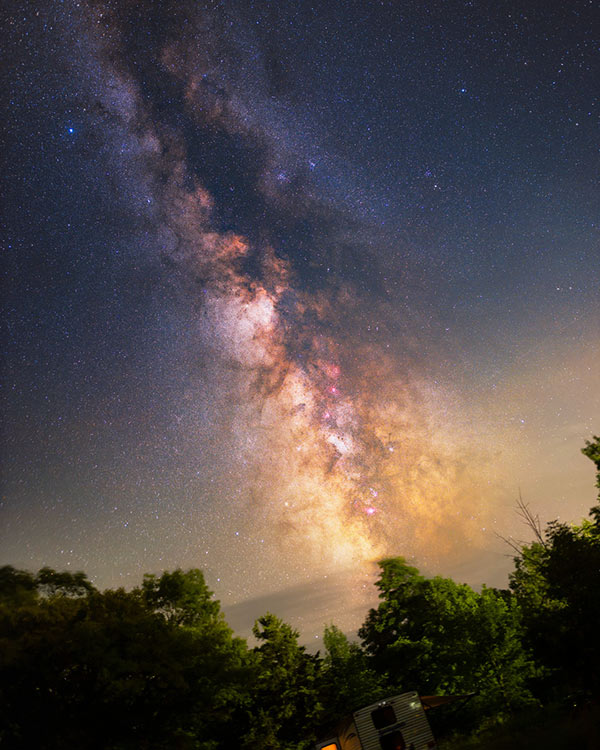 The core of the Milky Way in the night sky. Photo by Trevor Jones

The Moon looks quite close in our sky, and it seems to be virtually the same diameter as the Sun. This is due to an incredible coincidence that the sun is about 400 times farther away than the moon, and about 400 times bigger.

Despite how close it appears, we could put 30 Earths in the space between us and the Moon. Driving at highway speeds, it would take half a year to get there.

Size comparison between the Earth and the Moon.

Our local star, however, is also unimaginably huge. At highway speed, it would take almost two years to drive from one side to the other. Compared to Earth, the Sun is a monster; it’s a giant nuclear fusion reactor that has enough hydrogen fuel to continue uninterrupted burning like that for another 4 billion years. 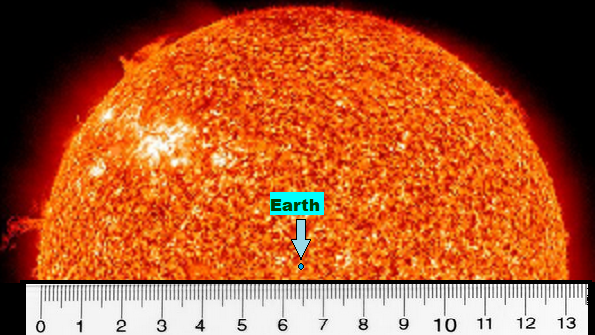 The size of the Sun compared to Earth.

The Speed of Light (SOL) is the ultimate speed limit in the Universe. Einstein taught us that the faster you go, the more of that energy becomes Mass (E=MC2), and as you approach SOL, the energy used to increase your speed becomes mass. The mass increases so much that it becomes infinite (if you could actually achieve light speed) and therefore would also require infinite energy to go faster.

Thus, the only thing that can (practically) reach SOL is light itself, because light is composed of photons which are massless particles.

So using the fastest thing possible, light, and how quickly it travels in a period of time, we have a measurement method for long distances. For example, in one second light travels ~300,000 kilometers. That means it can get to the Moon in about 1.25 seconds. The distance is therefore called 1.25 light seconds.

Mars is in a different orbit than Earth, so its distance from us varies. It’s much further than the Moon, so we use light minutes instead of light seconds. When Earth and Mars are closest, it takes over three minutes to send light (or radio) signals; at its furthest distance, it takes over 22 minutes.

We say the distance lies between 3.11 and 22.27 light minutes. On average, that is almost 1,000 times farther than the Moon is from Earth.

Our farthest planet, Neptune, is so far away that we measure its distance in light hours. From the Sun to Neptune is about four light hours.

For comparison, our two most distant probes, Voyager 1 and 2, are about 21 light hours and 18 light hours away right now in 2022.

Even our closest non-solar system neighbors are very far. The closest, Proxima Centauri, along with Alpha Centauri A & B is about 4.3 light years away from us.

You have never seen a full image of the Milky Way Galaxy (where we live) because that would be impossible. What you have seen are illustrations of what we think it looks like or other galaxies that we think resemble ours.

Our galaxy is approximately 100,000 light-years from edge to edge. It would take longer than the age of the entire universe for us to launch a camera outside the galaxy far enough to take the image; it would then take many millennia for the radio waves to travel back to us with the picture.

In fact, ever since we’ve had the radio, invented in the early 1900s, its signals have traveled away from Earth, at SOL, and can be no further than the number of years that have passed since then, or about 100 light years.

99.999% of the 200 billion stars in our galaxy couldn’t possibly know we exist yet, based on our radio signals.

Nearly all the stars you can see in the darkest night sky with your unaided eyes would number about 3,000.

They would all fit in this red circle (if this were the real Milky Way) since almost everything else requires astronomical instruments for us to observe. 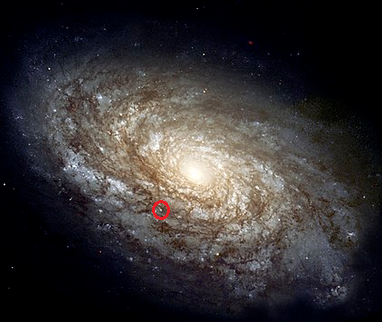 An illustration depicting our approximate location within the Milky Way.

There are about 50+ galaxies in our immediate vicinity that we call The Local Group. This is a globe about ten million light-years in diameter. Some are bigger than the Milky Way, many are smaller. They mostly have hundreds of billions of stars of their own, too.

The Local Group. An Atlas of the Universe (Richard Powell).

This sphere is an additional 100 million light-years across, and our Local Group is dwarfed into insignificance being only 1% of the 100 other “local groups” similar to our own. These are all contained within the Virgo Supercluster with about 5,000 galaxies of its own.

But the Virgo Supercluster vanishes into insignificance when we expand further to the Laniakea Supercluster, which measures over half a billion light years across and contains at least 100,000 galaxies. Is that big? Not in comparison to the Observable Universe.

The following video discusses the idea of scientists “redrawing the boundaries of the cosmic map”. This redefines our home supercluster to “Laniakea”, which means ‘immeasurable heaven’ in Hawaiian.

In the incredible illustration by Pablo Carlos Budassi below, you’ll see the observable universe on an increasingly compact scale. The Earth and Sun are at the center, followed by our solar system, then nearby stars, nearby galaxies, distant galaxies, filaments of early matter, and eventually, the cosmic microwave background. 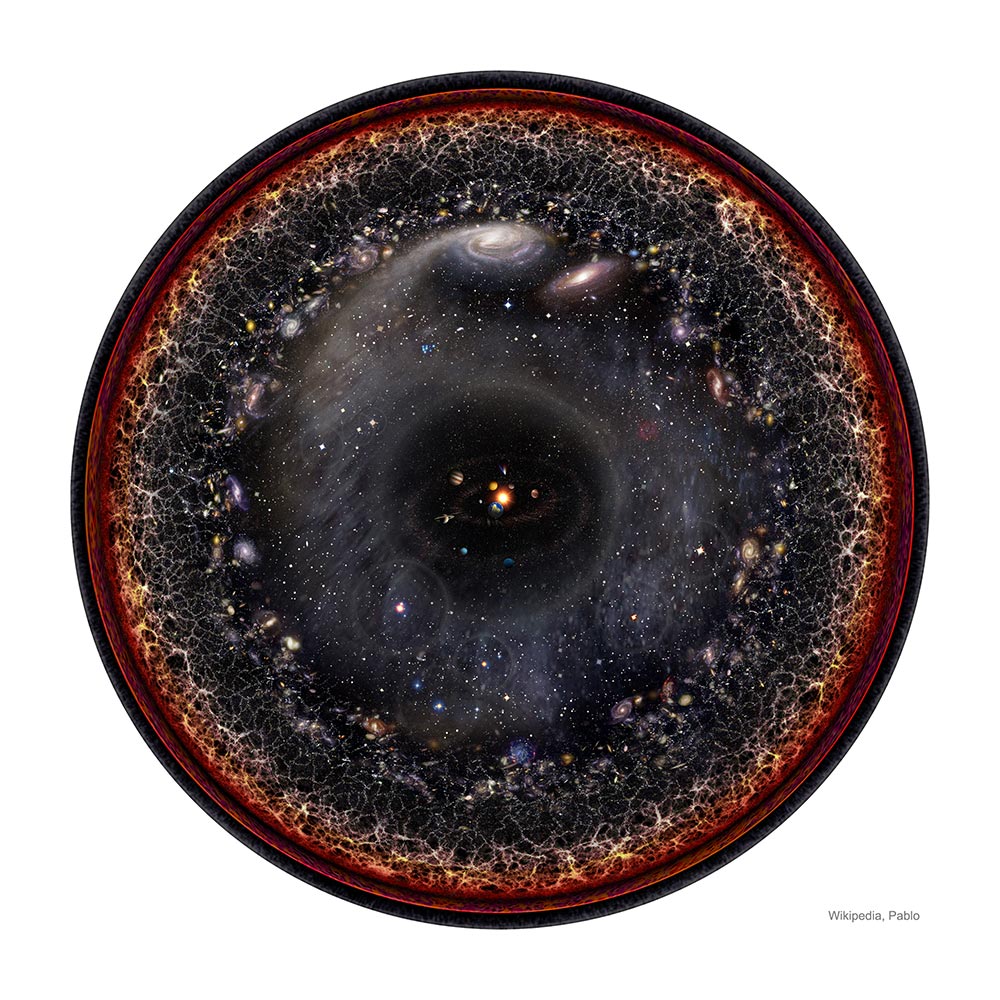 In the area of the universe that we can see, there are approximately two trillion galaxies (2,000,000,000,000). Here, even the Laniakea Supercluster looks like a speck of dust caught in a sunbeam.

From anywhere in the Observable Universe the farthest point is 46.5 billion light years away. Of course, that exceeds the age of the universe, which is only about 13.8 billion years, so how is that possible?

Simply enough, due to a process, we don’t yet understand, the universe is expanding, and the further away an object is, the faster it recedes from the observer.

We currently refer to the phenomenon as being driven by Dark Energy and Dark Matter which are terms we created as placeholders until we have an explanation for the process. No one has ever seen Dark Matter or measured Dark Energy.

What we do know is that something causes the universe to expand and at the farthest reaches, space expands so quickly that it exceeds the ability of light to cross that space.

Light beyond a certain distance can’t go fast enough to ever reach us, so effectively that light-emitting object disappears for us, forever. Physics won’t let us see beyond the Observable Universe.

Telescopes helped us prove that the Earth was “just another planet” and not the “center of the universe” like some religions decreed. Strangely enough, however, they were right… 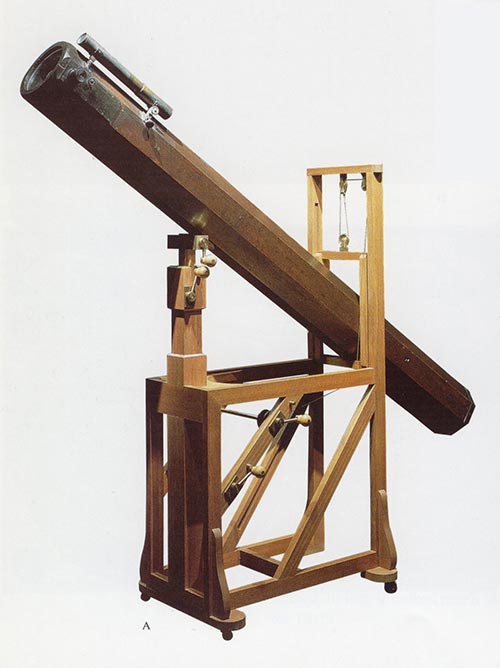 The fact that we cannot see the entire universe doesn’t change the likelihood of its size being much greater than we see.

What it does mean is that from any point in the universe that we can get to, the edge will always be about 46.5 billion light years away, in every direction.

So you really are at the center of the universe or at least the observable part.

To help you gain perspective on the size of the universe, there are two videos that are very instructive to watch. The first is the original Sloan Digital Sky Survey.

It is completely silent and gives you a tour of just the nearest 400,000 galaxies to our own.

Each dot you see is not a star, but a galaxy with billions of stars in each. It’s best watched on a large screen in a dark room.

The second one is colored, has music, and ends up showing you as much of the observable universe as we can currently imagine. Have a nice trip.