What is a Nebula? 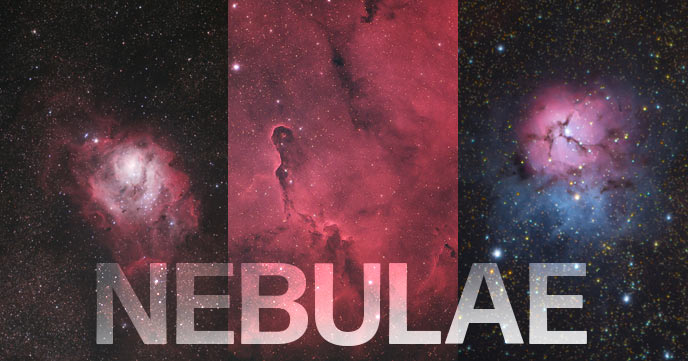 What is a Nebula?

A Nebula is named from the Greek word for “cloud”. Nebulae (plural) come in many shapes and sizes and have a way of captivating those that observe and photograph these deep sky objects in space.

Most nebulae are enormous in size. Some are even hundreds of light-years in diameter. Nebulae do contain some mass. They have a greater density than the space surrounding them. Yet many nebulae are less dense than any vacuum we have created on Earth.

“a nebula is a cloud of gas and dust in outer space, visible in the night sky either as an indistinct bright patch or as a dark silhouette against other luminous matter.”

Many nebulae are visible due to fluorescence caused by embedded hot stars. Other nebulae are so dispersed they can only be distinguished with long exposures and special filters.

A nebula is a giant, interstellar cloud of gas and dust in space, formed from stars. Nebulae have varying compositions depending on how they were formed and where they are. 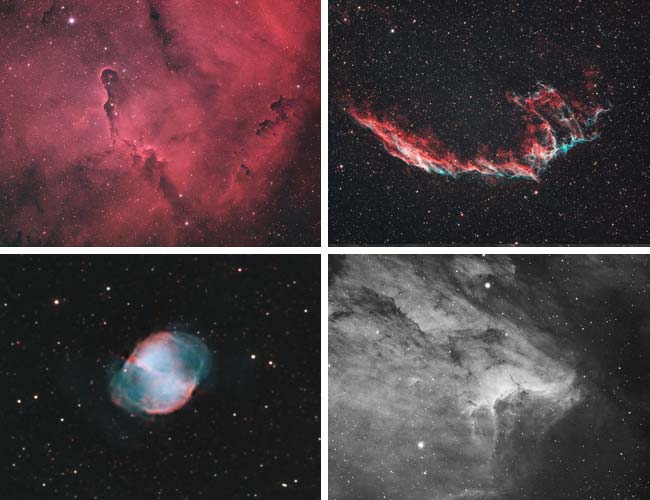 Examples of nebulae I have photographed from my backyard.

Nebulae usually consist of Hydrogen and Helium, as these are the most common and stable compounds in the Universe. The formation of a nebula can occur when a star undergoes a significant change, such as excess fusion in its core.

In the case of a planetary nebula, the formation of this deep sky object occurs when a white dwarf star explodes during a supernova. The explosion sends interstellar materials into space that can eventually form into a nebula.

Stellar objects that can be called Nebula come in four major classes. Most fall into the category of Diffuse Nebulae, which means they have no well-defined boundaries. These can be subdivided into two further categories based on their behavior with visible light – “Emission Nebulae” and “Reflection Nebulae”.

The Four Main Types of Nebulae

Also known as “stellar nurseries”, these massive collections of hydrogen gas are pulled together by gravity to form incredible formations like the “Pillars of Creation” found within the Eagle Nebula.

In these star-forming regions, the formations of gas, dust, and other materials cluster together to form denser regions. The density attracts matter and eventually becomes dense enough to create the formation of stars. The remaining material is then believed to form planets and other planetary system objects.

Emission Nebulae are those that emit radiation from ionized gas and are often called HII regions because they are largely composed of ionized hydrogen. The Orion Nebula is an emission nebula and star-forming region.

Not only is it the brightest nebula in our sky, but it is also the most active star-forming region in our Galaxy. This nebula can easily be observed up-close with a small telescope. It occupies an area that is twice the diameter of our full Moon.

As gravity continues to merge these materials together, the region becomes hot enough to create a new star. The remaining materials may form into Planets that will orbit the star, just as our Solar System was formed. 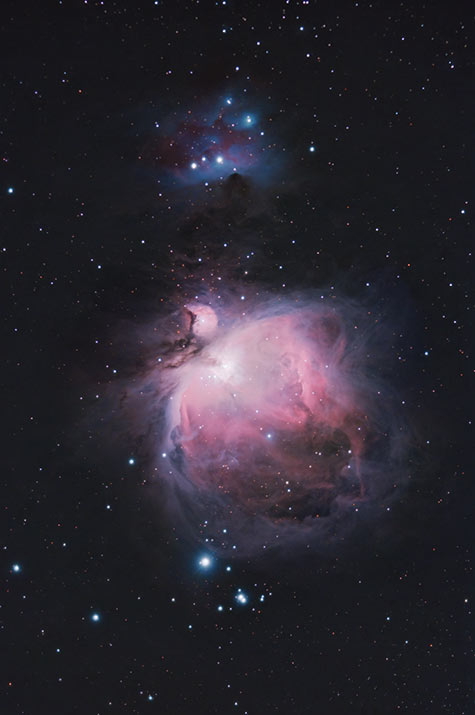 The Orion Nebula is a perfect example of a star-forming region or “stellar nursery”.

When early astronomers observed these round, compact nebulae in the night sky – they thought that they must be planets. In reality, planetary nebulae have nothing to do with planets.

Planetary nebulae are formed when a star dies, and create dramatic formations of radiating cosmic gas. Some great examples of planetary nebulae in the night sky include the Ring Nebula, the Dumbbell Nebula, and the Helix Nebula.

Planetary Nebulae involves a low-mass star entering the final stage of its life. This is called the Red Giant phase, where the star slowly loses its outer layers due to helium flashes from their interior.

When the star has lost enough material its temperature increases. In turn, the UV radiation that is emitted ionizes the surrounding material that has been thrown off.

The gas is expanding outwards at an incredible speed, and this movement has been documented in the following timelapse of V838 Monocerotis captured over time by Hubble. 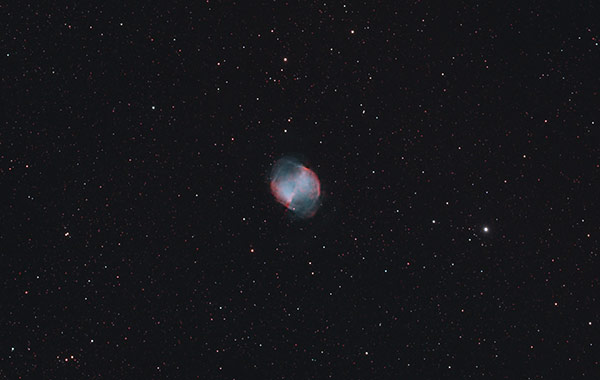 The Dumbbell Nebula photographed using a camera and telescope.

The gas is expanding outwards at an incredible speed, and this movement has been documented in the following timelapse of V838 Monocerotis captured over time by Hubble.

This class also contains the subclass known as Protoplanetary Nebulae (PPN). This applies to astronomical objects that are experiencing a short-lived episode in a star’s evolution. This is the rapid phase that takes place between the Late Asymptotic Giant Branch (LAGB) and the following Planetary Nebula (PN) phase.

During the Asymptotic Giant Branch (AGB) phase, the star undergoes mass loss, emitting a circumstellar shell of hydrogen gas. When this phase comes to an end, the star enters the PPN phase, where it is energized by a central star, causing it to emit strong infrared radiation and become a reflection nebula.

The PPN phase continues until the central star reaches a temperature of 30,000 K, after which it is hot enough to ionize the surrounding gas.

A supernova remnant is a cosmic explosion that has spread the materials from a star across a huge expanse of space. The remnants of this explosion have formed into a nebula, and this nebula type creates some of the most incredible formations in space.

Some nebulae are formed as the result of supernova explosions and are hence classified as Supernova Remnant Nebulae. In this case, short-lived stars experience implosion in their cores and blow off their external layers.

This explosion leaves behind a “remnant” in the form of a compact object – i.e. a neutron star – and a cloud of gas and dust that is ionized by the energy of the explosion.

The Veil Nebula is a prime example of Supernova Remnant, as seen as this image captured using a small telescope in my backyard. The Veil Nebula includes several filamentary nebulae, including Pickering’s Triangle. 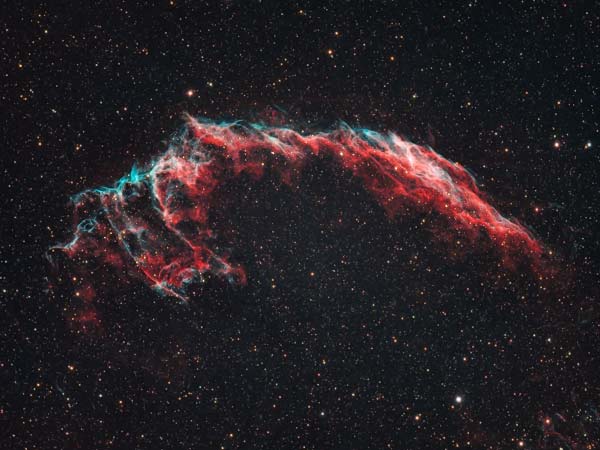 The Eastern Veil Nebula is a Supernova Remnant.

A Dark Nebula is a cloud of gas and dust that is revealed due to the bright areas of interstellar material and stars behind it. The nebula is silhouetted against a bright background to create interesting shapes and formations.

There are also what is known as Dark Nebulae, opaque clouds that do not emit visible radiation and are not illuminated by stars but block light from luminous objects behind them. Much like Emission and Reflection Nebulae, Dark Nebulae are sources of infrared emissions, chiefly due to the presence of dust within them.

Examples of dark nebulae include the Coalsack Nebula and the Horsehead Nebula. This nebula is composed of thick clouds of dust that block the bright emission nebula gas behind it. 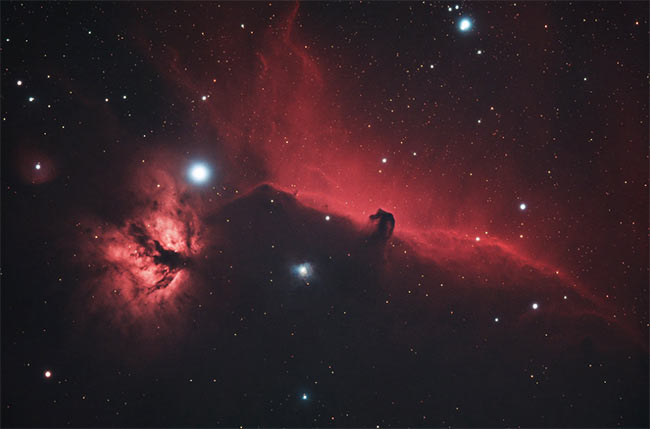 The Horsehead Nebula is perhaps the most iconic Dark Nebula in the night sky.

Some deep sky objects combine different types of nebulae in one. A prime example of this type of object is the Trifid Nebula.

The Trifid Nebula consists of an emission nebula, reflection nebula, and a dark nebula in one. It is the perfect example of a combination nebula with a complex and unique structure. 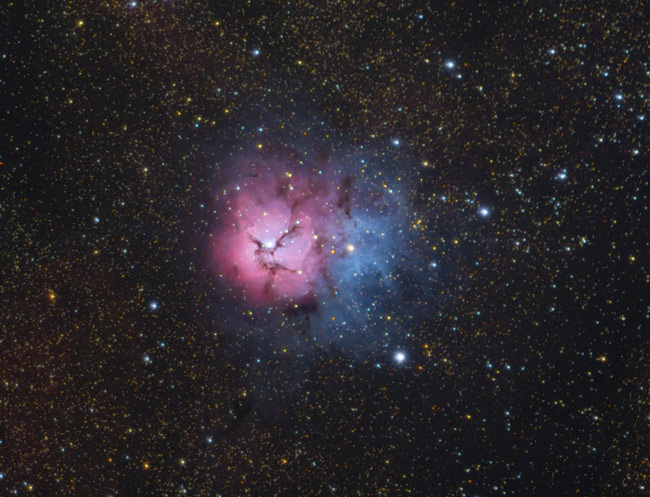 The Trifid Nebula combines an emission nebula, reflection nebula, and dark nebula into one.

What Causes a Nebula?

Essentially, a nebula is formed when portions of the interstellar material experience a gravitational collapse. Mutual gravitational attraction causes matter in space to gather and join together, forming areas of intensifying density.

Stars may begin to form in the central region of this collapsing material. The ultraviolet ionizing radiation causes the gas surrounding the star to become visible in optical wavelengths (what our eyes can see). These formations can be hundreds of light-years in diameter.

The Universe is not a total vacuum. Outer space is comprised of “Interstellar Medium” (ISM) which is essentially gas and dust particles. A whopping 99% of the Interstellar Medium is composed of gas, and about 75% of its mass takes the form of hydrogen. The remaining 25% is helium.

The interstellar gas includes neutral atoms and molecules and charged particles like ions and electrons. This gas has an average density of approximately 1 atom per cubic centimeter, which is extremely thin.

“Even though the interstellar gas is very dispersed, the amount of matter adds up over the vast distances between the stars. Eventually, along with enough gravitational attraction between clouds, this matter can combine and collapse to forms stars and planetary systems.” 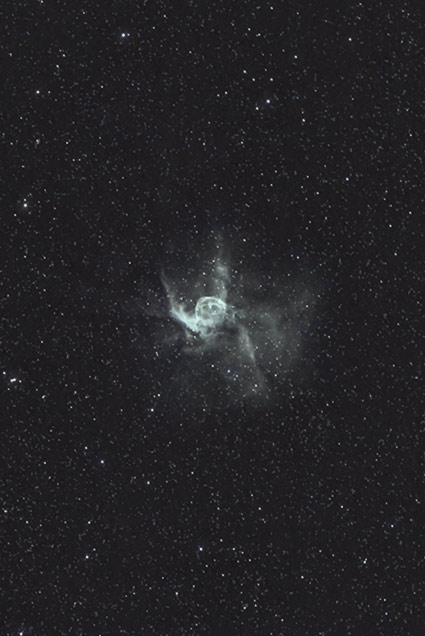 Some nebulae have extremely large apparent dimensions, as is the case with the North America Nebula. This massive nebula (120 x 100 arcmins) was named after the shape of the continent it resembles. The photo below shows the location of this giant nebula in the constellation Cygnus. One way to effectively photograph nebulae in the night sky is to use narrowband filters that isolate specific wavelengths of gas such as hydrogen. A filter such as the Astronomik 12nm Ha clip-in design will fit inside of the camera body and can be used with telescopes or camera lenses.

As an example, the photo below was taken using a hydrogen-alpha filter in front of the camera sensor of my Canon EOS 60Da DSLR camera. The intense H II regions of the North America Nebula are revealed with impressive contrast and clarity. 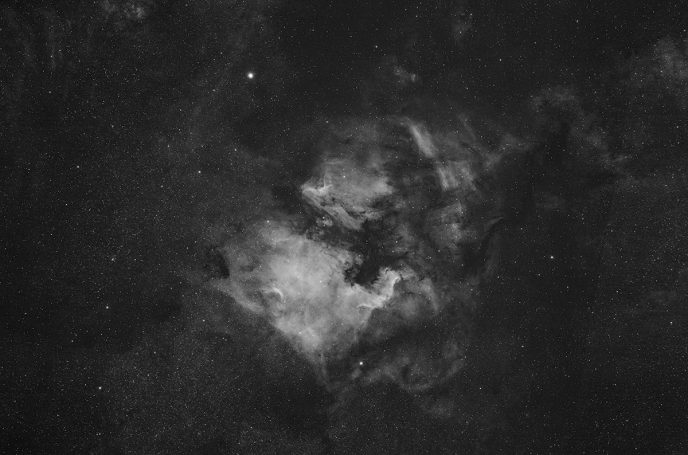 The North America Nebula in H-Alpha (DSLR and 135mm Lens).

You can view the images of nebulae I have photographed with my camera and telescope in my astrophotography image gallery. To learn how to take pictures of objects in space, please see my complete beginner’s guide.