Whether you have seen the incredible images of the Helix Nebula captured using the Hubble Space Telescope, or are lucky enough to have observed this nebula through the eyepiece of a telescope yourself, NGC 7293 is one of the most iconic deep sky objects in the night sky. 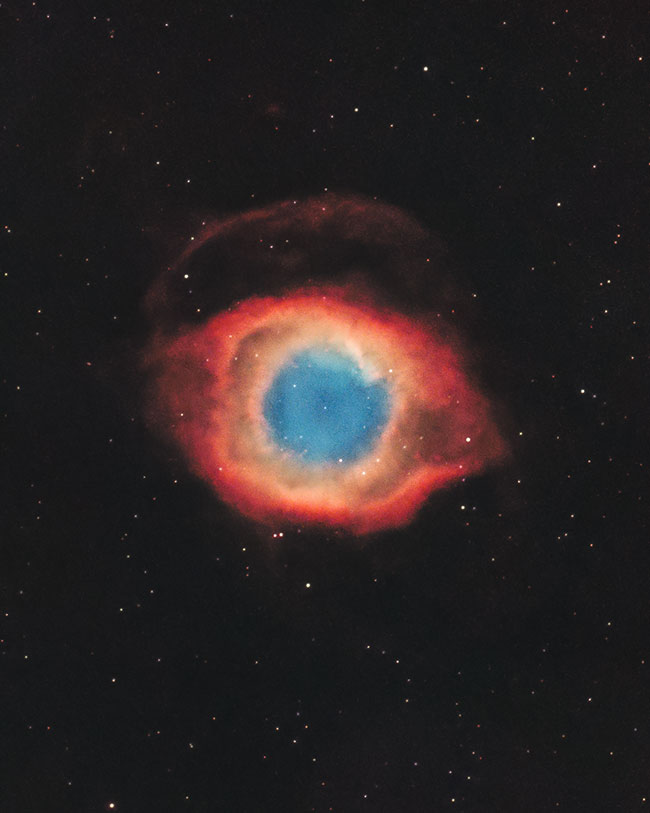 The Helix Nebula photographed using a QHY268C camera and telescope.

This nebula was created when a star (similar to our own Sun) nears the end of its life. It was formed when the star shed its outer layers near the end of its evolution and expelled the gases into space. The remnant stellar core (the planetary nebula nucleus) will eventually become a white dwarf star.

It is similar in appearance to the Ring Nebula in Lyra and is one of many well photographed planetary nebula in the night sky. Other well known planetary nebulae include the Dumbbell Nebula and the Cat’s Eye Nebula.

Through binoculars or a small telescope, the Helix Nebula can be observed under the right conditions. For the best view, be sure to be well away from city light pollution, and during the New Moon phase.

This planetary nebula will appear as a hazy, greenish cloud, similar to the visual appearance of the Dumbbell Nebula in Vulpecula.

The Helix Nebula has been referred to as the “Eye of God“, due to its appearance of a human eye in space. The outermost ring of the “eye” shape is roughly 25 arc-minutes in diameter.

In the summer months, look towards the constellation Aquarius to the south, using the bright star Fomalhaut (magnitude 1.72) in Piscis Austrinus as a reference. The star map below shows the location of NGC 7293 from my latitude in August. 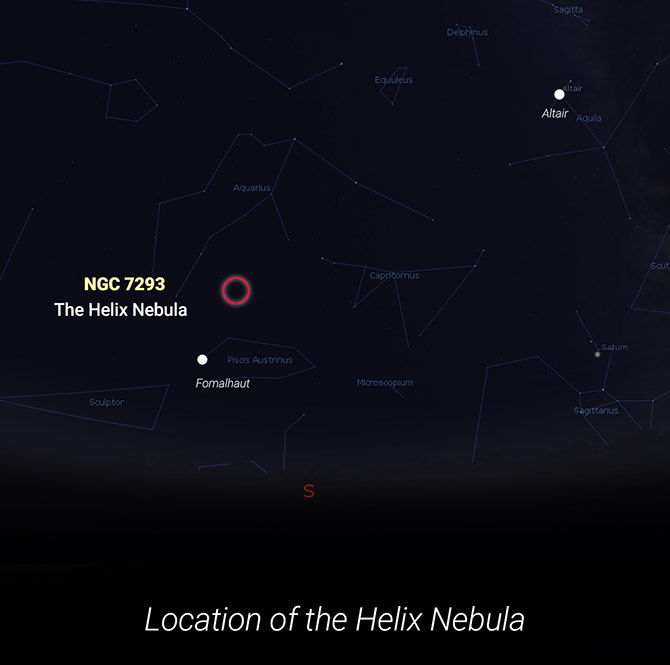 The photograph below was taken from my backyard using a camera and a refractor telescope. The image consists of 20 x 5-minute exposures using a dedicated astronomy camera. 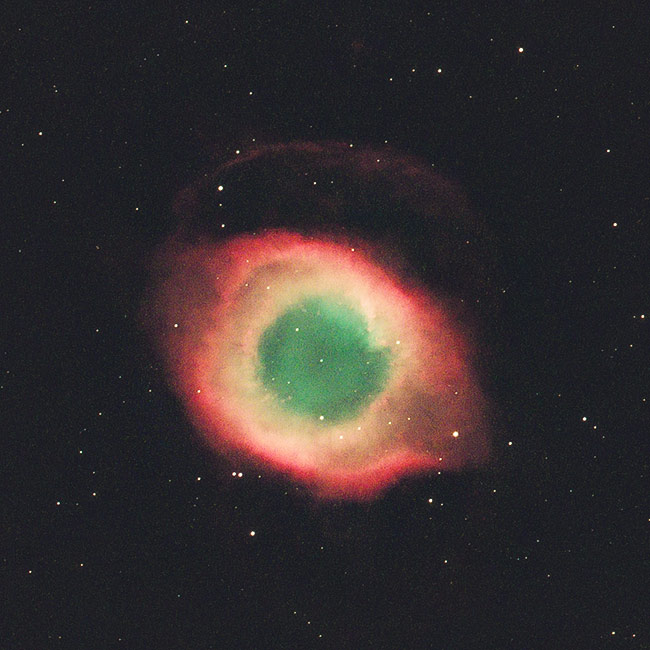 Amateur astrophotography enthusiasts are able to capture the Helix Nebula using modest telescope equipment. For example, the image above was collected using a small 150mm refractor on an equatorial telescope mount.

This telescope has a focal length of 1050mm, which is a great fit in terms of magnification for a target like the Helix Nebula. 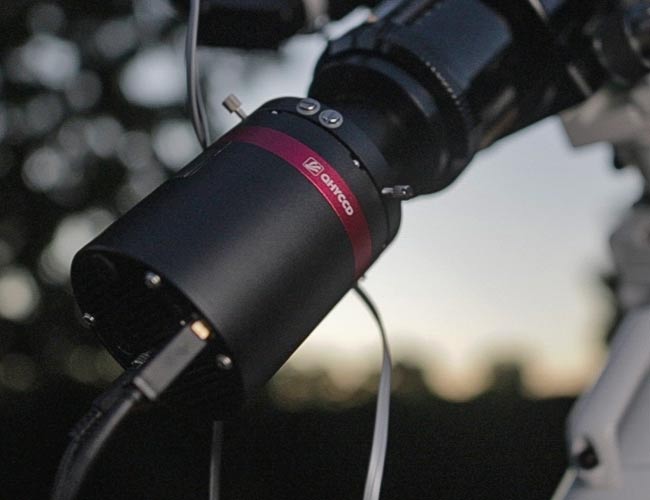 The Camera used to capture my image of the Helix Nebula (QHY268C).

To photograph the Helix Nebula, you may benefit from using narrowband filters that isolate certain gases. For my image, an Optolong L-eXtreme dual bandpass filter was used to collect signal in the h-alpha, and OIII wavelengths.

I collected 20 x 5-minute images using a one-shot-color camera and stacked the data in an application called DeepSkyStacker. The use of dark frames and flat frames helped to calibrate the image so that I could process the data naturally in Adobe Photoshop.

To process the image, I separated each color channel and applied adjustments to each color independently. The red channel contained the majority of the signal in this object, which is often the case when capturing targets containing hydrogen gas. 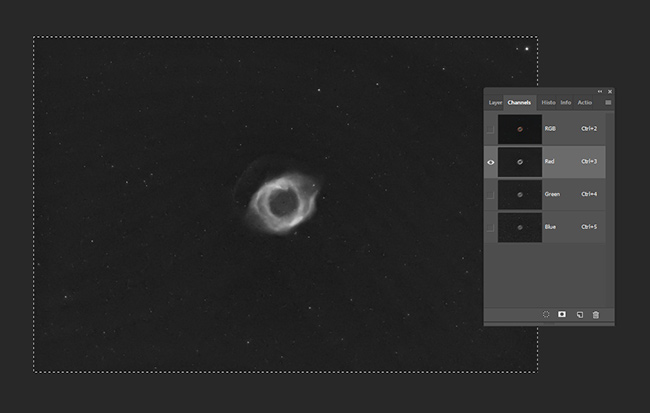 I made a slight color adjustment (selective color) to the red channel data to achieve a more golden color to the outer ring of the Helix. This was a creative choice based on my personal preferences, and may not be the direction you choose when processing the Helix for yourself.

Here is a look at my deep sky astrophotography setup pointed towards the Helix Nebula in the backyard. As you can see, the telescope is pointed very low in the sky from my latitude. 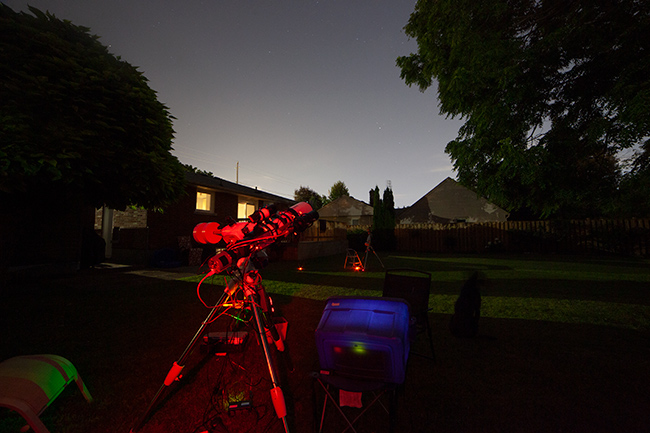