The Horsehead Nebula (Barnard 33) is an iconic dark nebula in the constellation Orion. Along with the nearby Flame Nebula (NGC 2024), this region is one of my absolute favorite deep-sky targets to shoot with my DSLR camera and telescope.

The Horsehead Nebula is part of the much larger Orion Molecular Cloud Complex. Compared to some nebulae, this one is very easy to find. It is located near the most eastern star in Orion’s Belt, Alnitak. 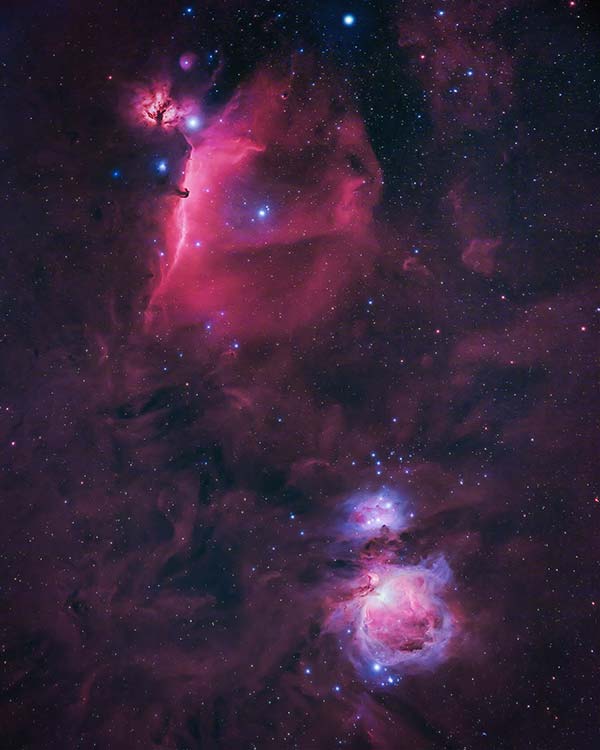 The Horsehead Nebula (and Flame Nebula) sits above the Orion Nebula.

From the Northern Hemisphere, this is a winter deep-sky object that is best photographed between the months of November – February.

From a light-polluted backyard in the city, capturing a nebula like the Horsehead Nebula requires patience and perseverance. The use of narrowband filters can dramatically improve your results.

The image shown above was captured with the help of a Triad Ultra Quad-Band filter. It is possible to photograph this nebula using almost any camera (see my results using a $250 DSLR camera). 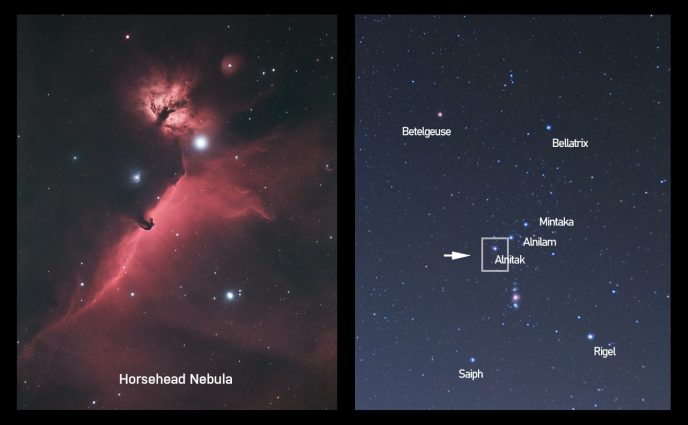 The Horsehead Nebula lies close to the bright star, Alnitak, in Orion’s Belt.

The Horsehead Nebula lives approximately 1,500 light-years away from Earth. This nebula gets its name from the shape of the dark cloud of dust in front of a vibrant red emission nebula (IC 434). It is one of the most photographed and identifiable nebulae in the night sky.

The reflection nebula residing southwest of the Horsehead is cataloged as NGC 2023. There are even more fascinating deep sky objects in this region of space including IC 432, as seen in this annotated image. 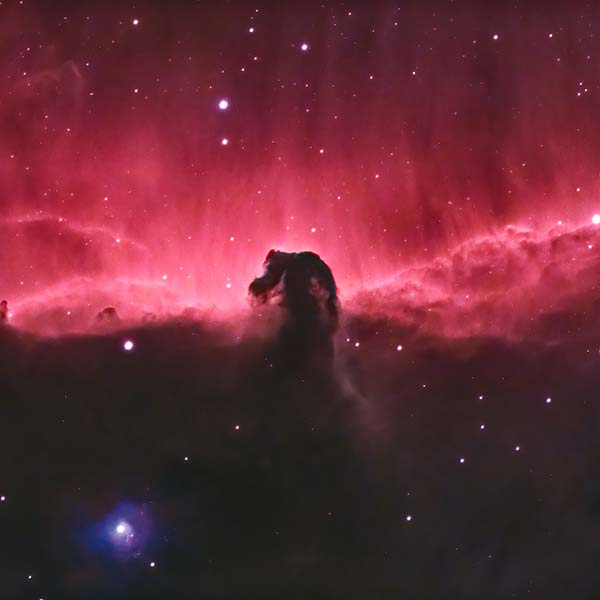 My close-up photo of the Horsehead Nebula using data captured with a monochrome CCD camera.

Images of the Horsehead Nebula are everywhere, including all of my social media profile photos.

The pinkish glow in my image is due to the hydrogen gas lying behind the Horsehead Nebula, which has been ionized by the bright star Sigma Orionis. The streaky appearance of the hydrogen gas in the background glow is created by Magnetic fields. The intense glowing strip of hydrogen gas that the Horsehead crosses over is my favorite feature of this deep sky object.

The darkness of the Horsehead Nebula’s figure is created by thick interstellar dust blocking the light of the gas and stars behind it. It is interesting to note that the lower portion of the Horsehead’s neck is casting a shadow to the left. I think it’s incredible to observe and study these features in an image taken with an entry-level astrophotography camera.

Can You See it Visually Through a Telescope?

As with all of the deep-sky nebulae I photograph, don’t expect to see an image of the Horsehead Nebula like the one shared on this page through the eyepiece of your telescope. To view the Horsehead Nebula visually, I’ve read that a telescope with at least 10″ of aperture is needed, and with the help of an h-beta filter.

I’ve personally never witnessed the Horsehead Nebula in “real-time” through a visual telescope. My primary visual telescope (8″ Dobsonian reflector) does not have enough light-gathering power to reveal the Horsehead, but the Flame Nebula is possible under the right conditions.

For modest telescopes under 8″ in aperture, stick to the brighter nebulae in Orion such as the Messier 42 or Messier 78.

Where this deep-sky object really shines, is through astrophotography. Capturing long exposure images of 3-minutes or more can really pull out the true beauty of this target.

There are very few targets I’ve pointed my camera and telescope towards more than the Horsehead Nebula (the Orion Nebula holds this title).

Through astrophotography, we can appreciate the delicate details of the Horsehead Nebula and the surrounding area, by collecting numerous long-exposure images.

Below, is an image of the telescope used (William Optics Zenithstar 73) for my latest image of the Horsehead and Flame nebulae. It is a doublet refractor telescope with a focal length of 430mm at F/5.9. 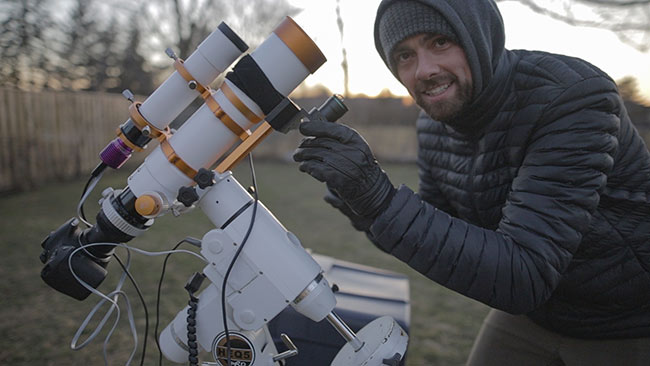 A wide-field apochromatic (APO) refractor is a superb instrument to use when capturing Barnard 33 with a DSLR camera. Due to the wide field of view of the Z73, I was able to frame the image to include the Flame Nebula. This is a popular orientation for images of the Horsehead Nebula in Orion.

The following video provides an inside look at what it is like to photograph a deep-sky object in the night sky.

A quad-band filter such as the Radian Telescopes Triad Ultra has many advantages when it comes to photographing nebulae with a color camera.

Light-pollution is largely eliminated from the data, and you are left with useful signal to build your image. In the example, below 24 x 5-minute images captured at ISO 1600 was enough to create an impressive image. 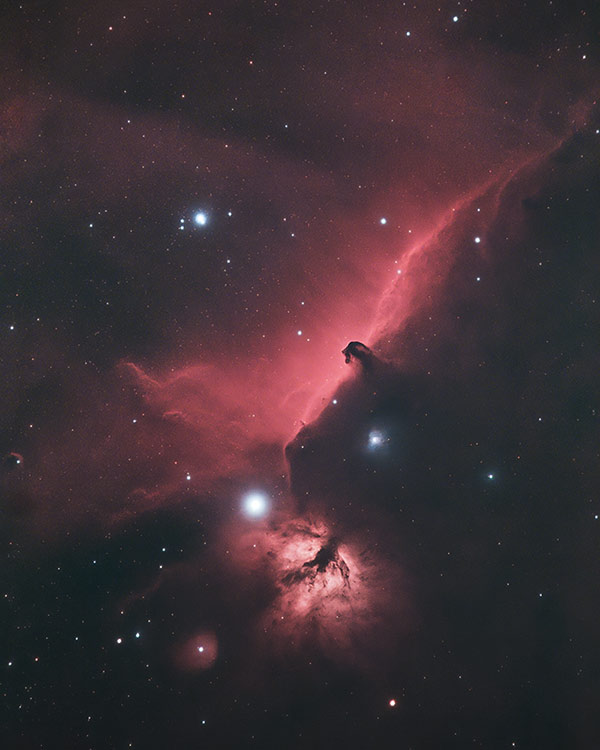 The images were registered and calibrated (using dark frames) in DeepSkyStacker. The final image was processed entirely in Adobe Photoshop 2020 using the methods described in my image processing guide.

Because this area contains a lot of hydrogen gas, a narrowband h-alpha filter is an effective choice for collecting important details of this subject. This isolates very specific areas of light emitted from the area surrounding the Horsehead Nebula and Flame Nebula.

I’ve photographed this nebula using a variety of camera lenses over the years, including an affordable Canon EF 50mm F1/.8. The image below was captured using a very modest astrophotography setup that included a Sky-Watcher Star Adventurer tracking mount.

The details of this imaging session are outlined in the video “Nebula photography with a cheap DSLR camera and lens“. 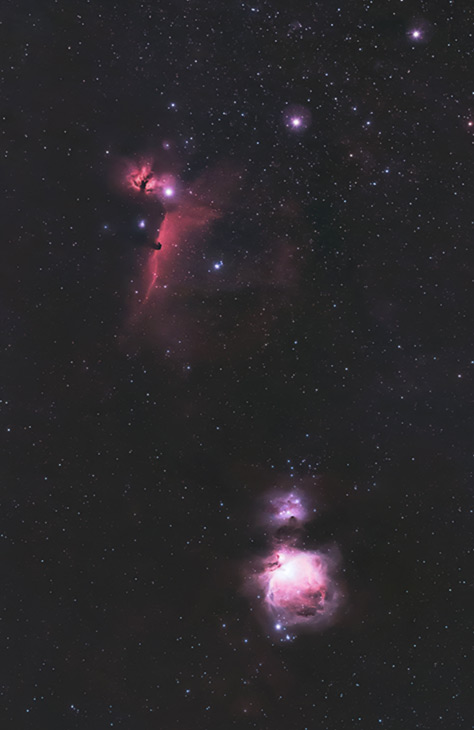 The image above should give you a good example of the image scale you can expect when using a crop-sensor DSLR camera with a mid-range telephoto lens such as the Rokinon 135mm F/2.

The entire imaging kit used for this project is rather affordable and portable. Darker skies will help produce better images using this configuration. 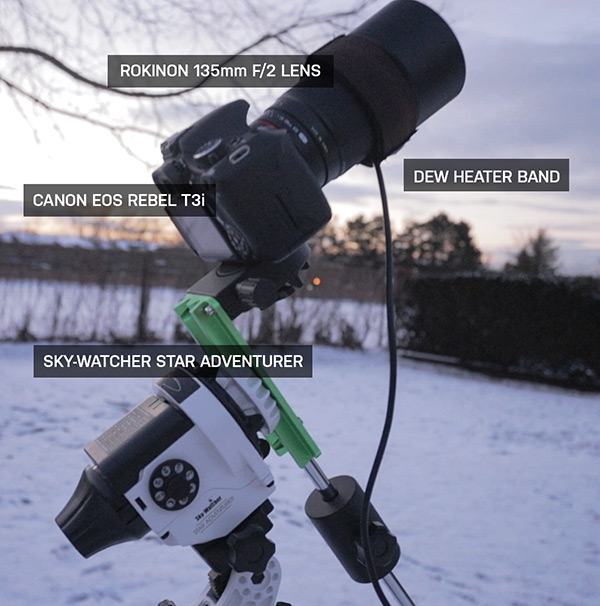 Photos captured using a narrowband Hydrogen Alpha filter ignore almost all wavelengths of artificial light and produce a detailed monochrome portrait of the area. The filter I use with my Canon Rebel T3i is an Astronomik 12nm Ha clip-in filter.

A filter like this is a great way to add impressive narrowband details to your existing color photos and even shoot during a full moon. You can use a filter like this with a telescope, or with a camera lens such as the Rokinon 135mm F/2 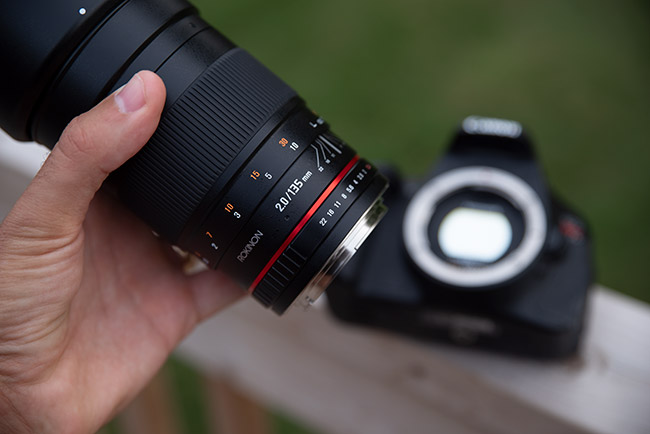 I absolutely love the way this filter isolates hydrogen gas in emission nebula targets. It also captures very small, sharp stars in a way that a broadband filter never could. As I mentioned earlier, clip-in filters like this can be used with a camera lens as well.

To create the image below, I captured several 4-minute exposures totaling 1 hour and 20 minutes of overall exposure time. 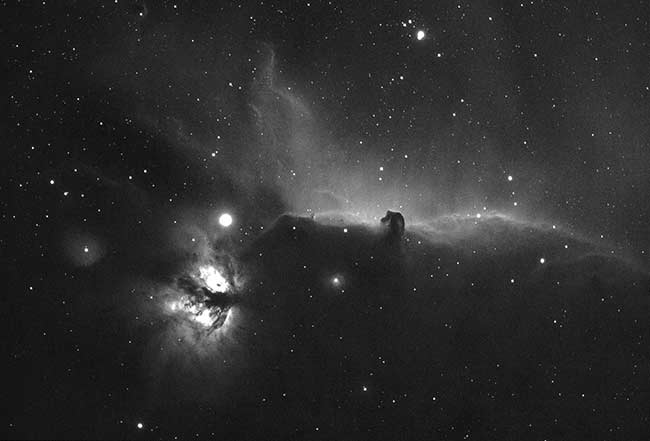 After stacking the Ha exposures in DeepSkyStacker, I combined the final version with the RGB data to create a HaRGB Composite. This method can produce incredible portraits of deep-sky nebulae like the Horsehead Nebula, even from bright skies in the city. 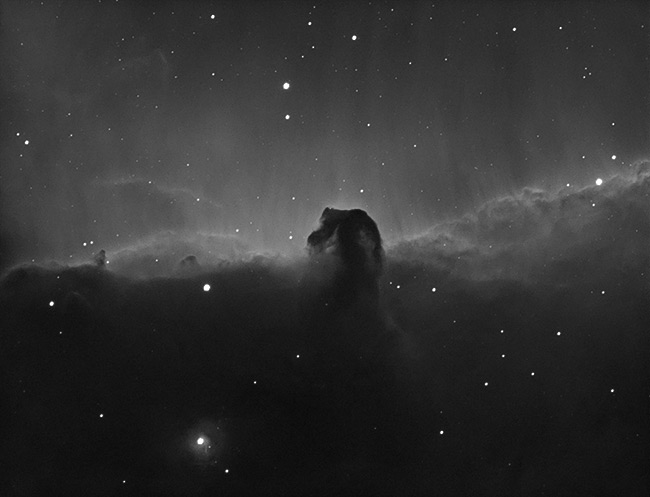 Adding H-Alpha to the image

The addition of isolated H-alpha data can help boost the overall impact of your image.  using the Astronomik 12nm Clip-in filter on my Canon T3i helped immensely. This filter helps to create more contrast between the nebulosity and the background sky.

Using a ha filter on your DSLR adds a new dimension to your existing RGB (regular color) images.  Here are a few of the benefits of combining Ha with existing RGB images: