Starlight Xpress is a company in the UK renowned for their cooled CCD cameras designed for low-noise imaging. They offer a wide range of high-performance CCD cameras (color and mono) for amateur and professional imaging.

The company has been in business since 1991, and formed as a vehicle to market the CCD camera designs of amateur astronomer, Terry Platt. Now, cameras such as the Lodestar X2 and the Trius series are enjoyed by amateur astrophotographers around the world.

I was fortunate to have the unique opportunity to test the Starlight Xpress Trius SX-42 CCD camera, which includes the Midi filter wheel and Lodestar X2 guide camera. This is the 20th-anniversary edition, a partnership with Sky-Watcher USA. 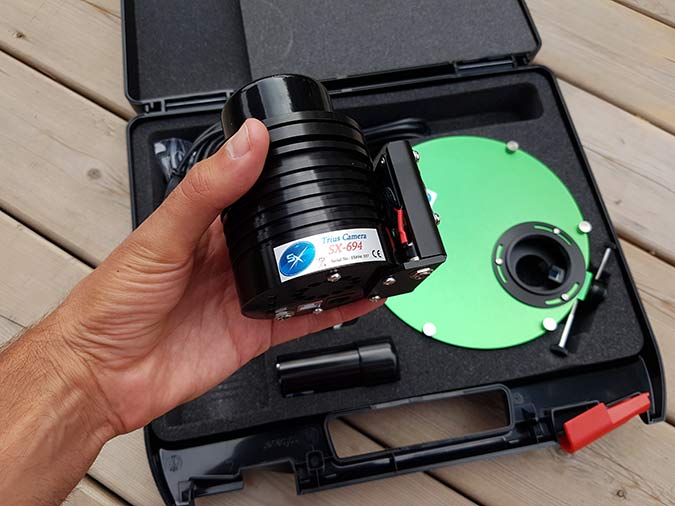 The Starlight Xpress Trius 694 monochrome and Trius SX-42 appear to be the same camera (with two different titles). The Sky-Watcher website lists them interchangeably, but I do not see the Trius SX-42 name on the Starlight Xpress website. To really confuse things, the label on the camera says “SX-694” I suppose it’s the #42 I am having a hard time finding a relation too.

Starlight Xpress makes both mono and color CCD cameras, as well as astronomy accessories to compliment their cameras such as their Maxi filter wheels, and off-axis guiders. The Starlight Xpress Lodestar has quite the reputation in the amateur astrophotography community, and it was the first Starlight Xpress camera I had ever heard of many years ago.

Some of their most popular CCD cameras include the SX-25C, a 6MP color CCD camera, and the SX-35, an 11MP monochrome CCD camera. The SX-42, or SX 694 mono CCD will be my very first Starlight Xpress user experience, and probably not the last. 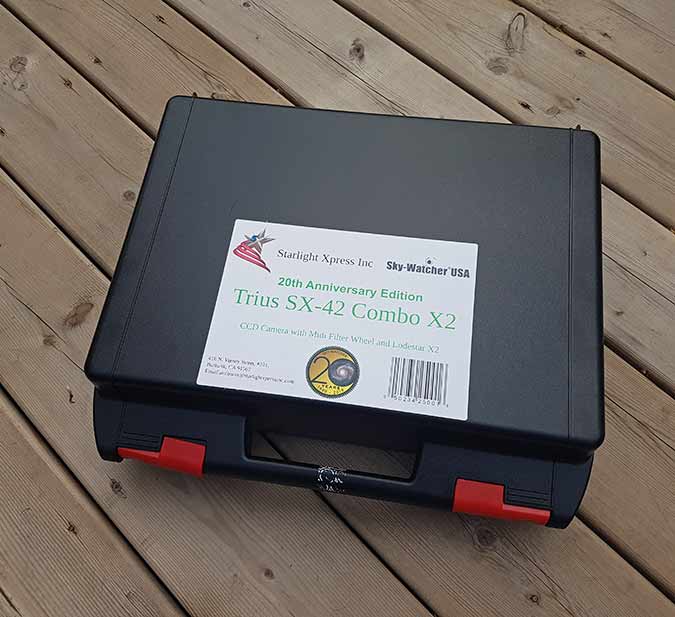 The fact that Starlight Xpress packages up this entire astrophotography camera, filter wheel, and autoguiding system as a kit is a huge time-saver. You pay a little more upfront, but everything is ready to go with the perfect spacing for your telescope.

The LodeStar X2 is an incredible guide camera (many consider it to be the best), so you’re really getting a future-proof camera setup that is capable of taking jaw-dropping images.

I took the image of the Whirlpool Galaxy shown below using this camera with a set of 1.25″ Astronomik LRGB filters through a Sky-Watcher Esprit 150 refractor. 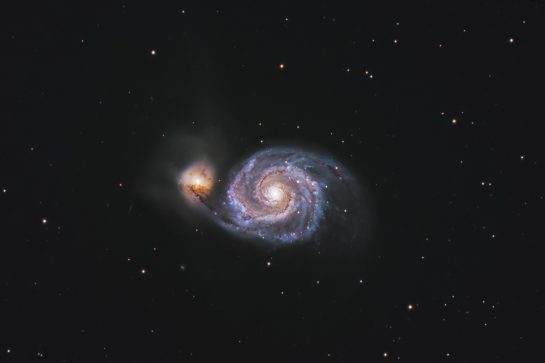 The Whirlpool Galaxy in LRGB. 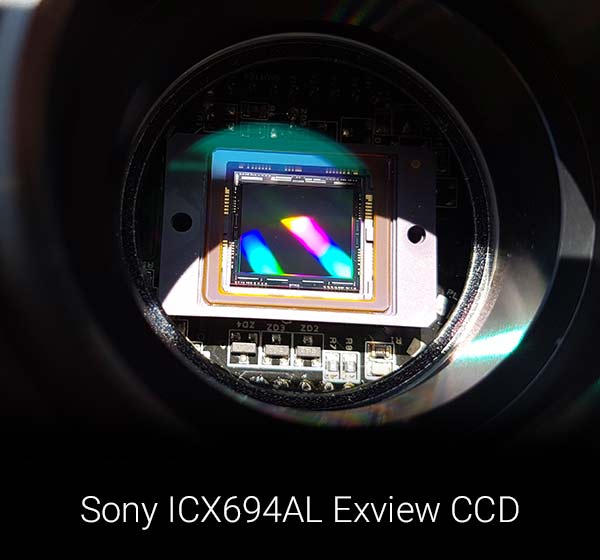 The readout noise is less than 5 electrons RMS, and the dark current is less than 0.003 electrons/second when imaging at -10C. What does this mean for deep sky astrophotography? It means a camera with less noise than any CMOS camera (whether it was cooled or not) I’ve ever used.

The regulated set-point thermoelectric cooling system allows the sensor to reach approximately -40C below ambient. This camera boasts a full-well capacity of 17,000 e- (unbinned), which basically defines the amount of charge an individual pixel can hold before saturating.

The Trius 694 camera comes as a part of a kit, with a dedicated hard carry case and all necessary cables. Sky-Watcher sells this kit along with their Esprit 150 ED APO refractor, for an incredible deep-sky astrophotography system for amateur astrophotographers.

One of the key differences between a cooled CCD camera vs. a CCD one is the very low amount of thermal noise, and how “clean” the calibration data is. This changes the way I would typically approach a deep sky project, as now taking 10 x 10-minute images makes a lot more sense than it did with my CMOS cameras.

The read noise is also significantly reduced (it’s comparable to using a CMOS camera at “zero gain” for maximum full-well depth), which means that the data should be really clean and easier to process.

Naturally, the best results from a monochrome CCD camera will be when narrowband imaging. The following example images using the SX Trius 694 Mono were captured using a Sky-Watcher Esprit 150 APO refractor, and Astronomik 6nm narrowband filters. 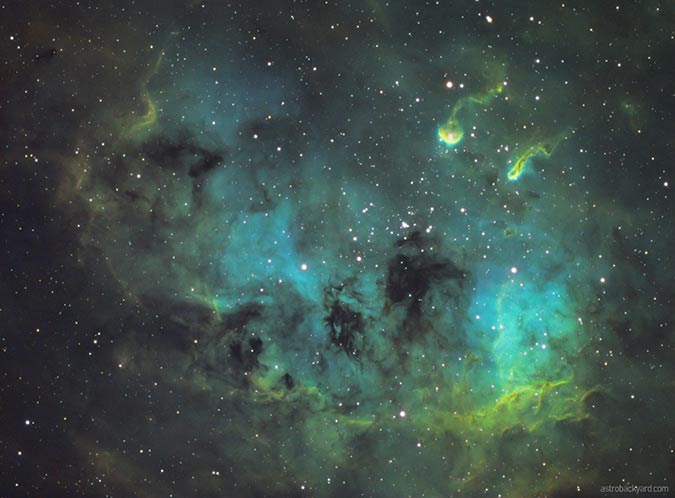 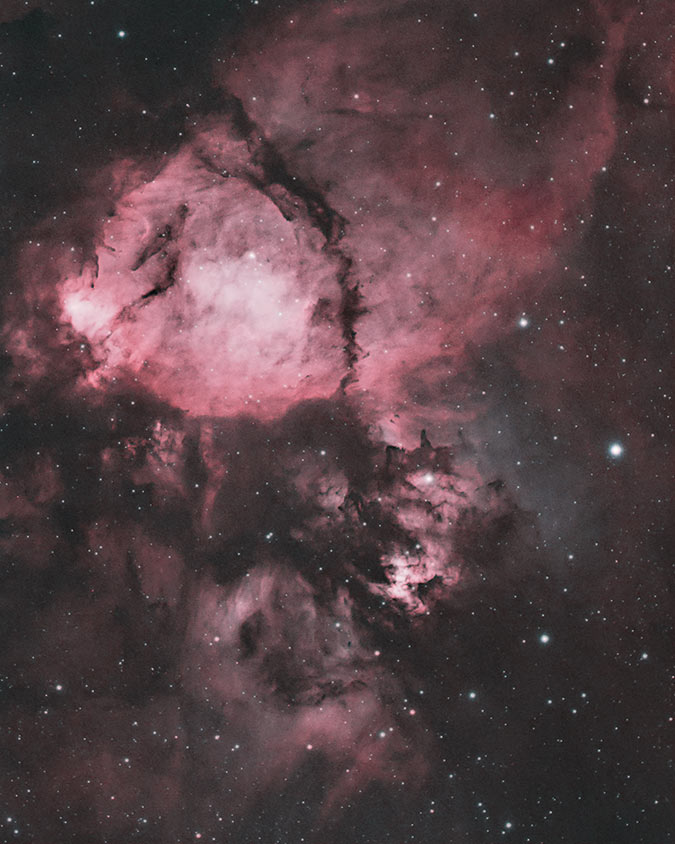 Aside from being the first CCD camera I’ve ever used personally, I noticed a number of interesting mechanical design differences from the CMOS astronomy cameras I’d used in the past. One of the more noticeable traits of the SX 694 out of the gate, was the “bolted-on” look of the cooling enhancer for the external body. Seriously “cool”.

I must say, the overall look of this CCD camera (especially looking down the barrel of the camera towards the sensor), has a very industrial, high-end feel. I dig it!

A look at the external Cooling Enhancer on the Trius SX-694.

The latest line of CCD cameras from Starlight Xpress includes the Trius Pro models, which are a redesigned version of the original Trius cameras. The mainboard of the CCD camera has been completely redesigned, and the read noise and download times improved.

To run the Trius cameras and SX accessories, you need to install the necessary Starlight Xpress drivers and software. The latest SX camera drivers can be found on their company website, along with camera software and filter wheel drivers. The SX-42 kit came with a USB stick containing all of the necessary software, along with a quick start guide. 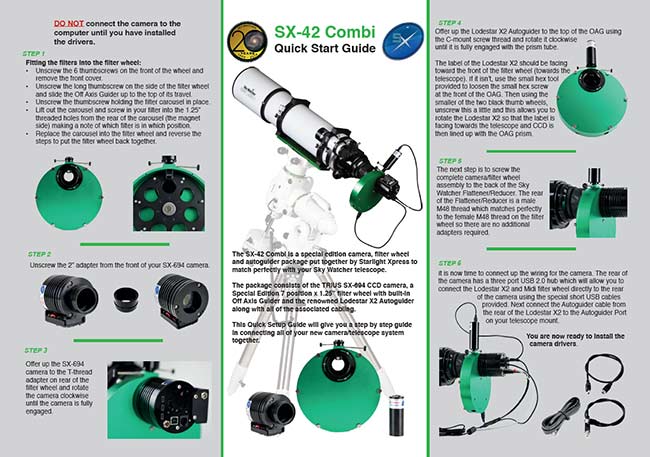 There are a few versions of the ASCOM drivers available. I have installed the latest version, which at the time of writing is v6.2.1.1812. It’s worth noting, that anyone who is using the SX-42 kit as I am, you’ll need to install the drivers for your second XS camera as well, the Lodestar X2.

You’ll also need to install the ASCOM SX filter wheel driver if you’re using the one shown below. Once you’ve installed all of the Starlight Xpress drivers, you’ll be able to select your camera, guide camera, and filter wheel from the drop-down menu in SGP. 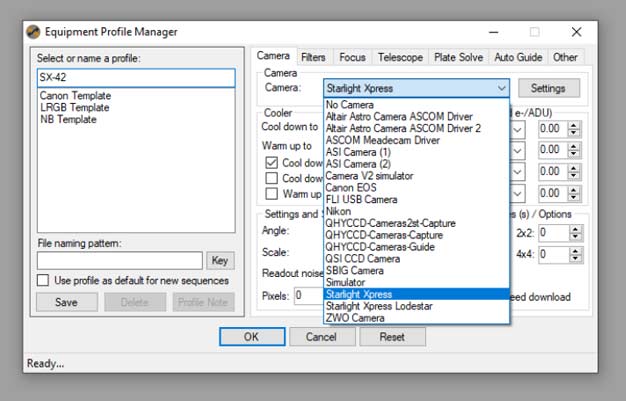 The Quick Start Guide (PDF) provided by Starlight Xpress as a part of the “SX-42 Combi” included several useful diagrams and illustrations. The following image shows you what it looks like to have the Trius CCD camera connected to the Midi Filter Wheel, with the Lodestar X2 guide camera in the OAG position.

The SX-694 camera powers the filter wheel and guide camera via the USB 2.0 connectors on the back of the camera. This really cuts down on the number of wires draped across your rig. The SX-42 kit with the Sky-Watcher Esprit 150 includes adapters with the correct spacing out of the box, a nice touch for users that are used to having to search the web for the right spacing for their camera. 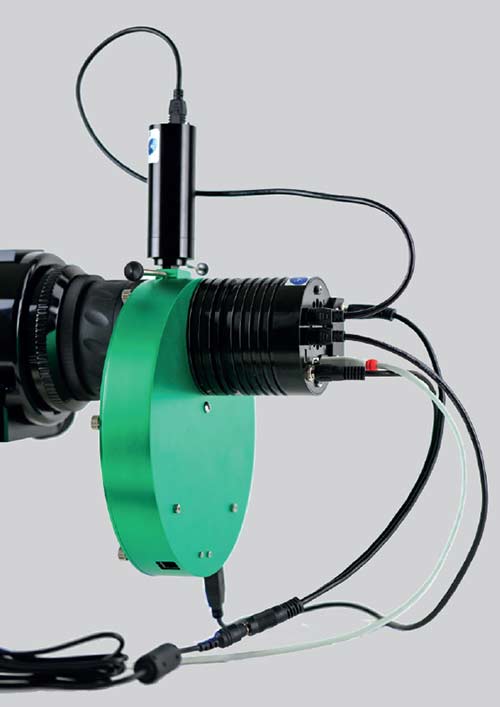 The SX-42 camera and filter wheel attached to the Sky-Watcher Esprit field corrector.

The Starlight Xpress Lodestar X2 is a compact autoguider camera, that can be powered and operated using a single USB 2.0 cable. The SX Lodestar X2 guide camera uses a Sony Exview interline CCD sensor with a pixel size of 8.2uM x 8.4uM. 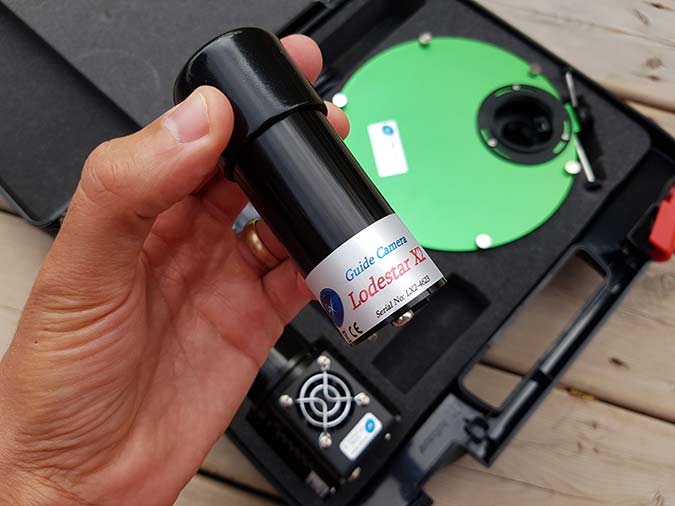 I noticed that owners of the Lodestar X2 mention that it is a great choice for OAG (off-axis guider) configurations, as the super-sensitive monochrome CCD sensor is capable of finding and guiding on faint stars pulled from the pick-off prism.

The original Lodestar autoguider is considered to be one of the best guide cameras on the market. The 0.4 MP Lodestar X2 is the latest incarnation of this legendary astrophotography camera, with a number of improvements over the original.

Chuck Ayoub shared his unboxing video of the Starlight Xpress Lodestar X2 guide camera on his YouTube channel back in 2016. This should give you a better idea of the dimensions of the camera, and the connections at the back of the camera.

The Trius SX-42 kit included a handsome, lime green 7-position USB filter wheel. This particular unit is the special edition filter wheel designed for SX medium-format cameras, and includes an internal sub-miniature DC motor drive to turn the filter plate. It does not need an external power supply, and the wheel operates directly from the USB input.

This unit holds 7 x 1.25″ filters, and those filters would typically be UV/IR, R, G, B, Ha, SII, Ha. Twp things I love about this product, are the fact that it is USB powered, without the need for an external power supply, and the integrated off-axis guider.

The special edition Midi Filter wheel model was designed to have the correct spacing adapters for the Sky-Watcher Esprit 150 ED APO refractor, out of the box. The slim design of the wheel is 38mm overall, including the threaded adapters. 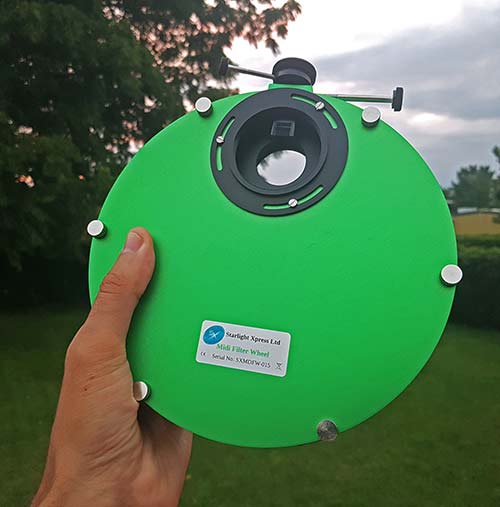