The Whirlpool Galaxy Galaxy (M51), is an interacting grand-design spiral galaxy in the constellation Canes Venatici. It is estimated to be 23-million light-years away.

The Whirlpool Galaxy is located at the coordinates  RA 13h 29m 53s | Dec +47° 11′ 43″. It can be spotted in a pair of binoculars by moving from the bright star Alkaid in Ursa Major, towards Cor Caroli in Canes Venatici.

Messier 51 is a northern hemisphere deep-sky object that is bright enough to observe in amateur telescopes. It is a popular choice for amateur astrophotographers during galaxy season. 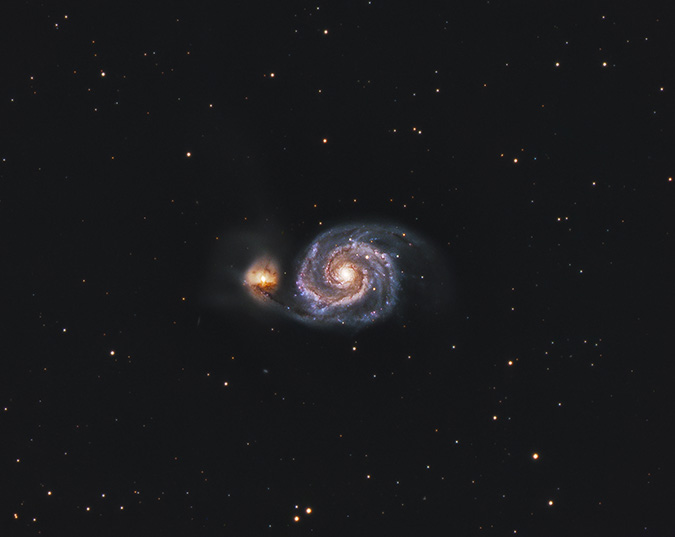 The Whirlpool Galaxy captured using a camera and telescope.

The Whirlpool Galaxy is estimated to be about 400-million years old. It was observed and cataloged by famous astronomer Charles Messier in 1773 as Messier 51 (M51). It eventually earned the nickname “The Whirlpool” because it resembles a vortex in the water.

M51’s companion galaxy (NGC 5195) is clearly visible in photographs, and even detectable through the telescope eyepiece (with enough aperture). The Whirlpool has a supermassive black hole at its heart, thanks to the merging of M51 with its neighboring galaxy, NGC 5195.

The Whirlpool Galaxy’s fascinating structure gives astronomers a better understanding of how galaxies interact with each other and how stars form within them. This article by NASA discusses how the Chandra X-ray Observatory discovered a black hole “burping” at the center of the Whirlpool’s companion galaxy.

The image shown above was captured using a monochrome CCD camera and, and a large refractor telescope (Sky-Watcher Esprit 150) from my backyard. Contrast my modest take on this deep-object with Hubble’s version taken in January 2005. 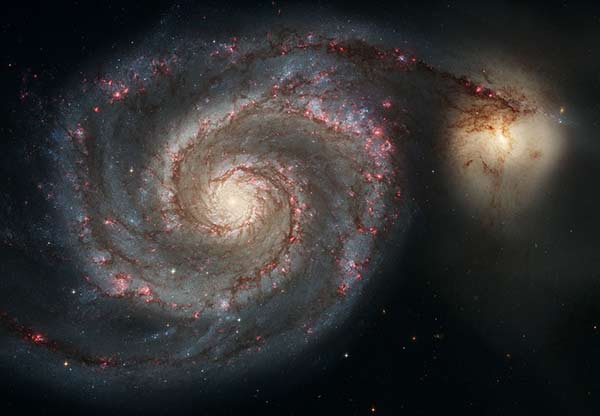 The Whirlpool Galaxy taken by the Advanced Camera for Surveys aboard the Hubble Space Telescope.

The Whirlpool Galaxy has been highly studied and observed by professional astronomers for many years. M51 was originally thought to be “a spiral nebula” until Edwin Hubble was able to identify Cepheid variable stars in some of these spiral nebulae.

This provided evidence that these stars were so far away that they must be entirely separate galaxies.

The Whirlpool Galaxy is an extremely satisfying astrophotography target due to its high surface brightness and impressively detailed spiral arm structure. As seen in this APOD image, there is also a subtle glow around the galaxy that is best enjoyed through long-exposure photography.

Through a telescope eyepiece, M51 is rather faint and fuzzy, although some of its structure can be observed under dark, moonless skies with enough aperture. The star chart below shows the location of the Whirlpool Galaxy in the night sky. 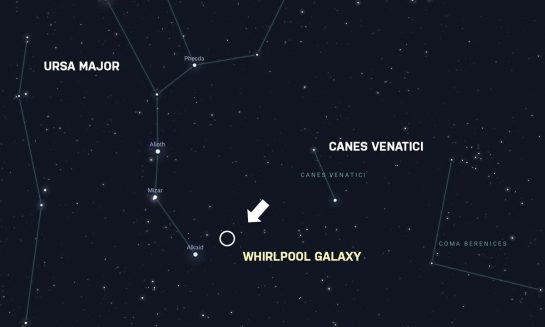 The location of the Whirlpool Galaxy. Stellarium.

My latest image of the Whirlpool Galaxy was captured from my Bortle Scale Class 6/7 backyard in Ontario, Canada in March/April 2020. I collected data in RGB color filters using a monochrome camera, along with key luminance details as well.

The Starlight Xpress SX-42 camera (Trius 694) is an incredible astrophotography camera, and the first and only true CCD camera I’ve ever used. Building this image be shooting multiple 5-minute exposures through LRGB filters was a labor of love, and I am very happy with the results. 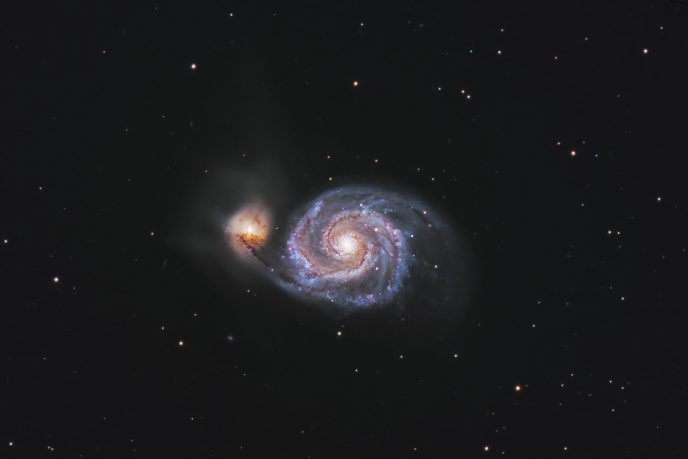 The Whirlpool Galaxy in LRGB (click for larger version)

This image uses a grand total of 6 hours of integrated exposure time. Much more luminance data was collected than any of the color filters, which seems to have been a good technique for this broadband galaxy target. Here is a breakdown of the exact exposure times used to create this image:

The integrated data through each filter was registered and stacked in DeepSkyStacker (see my DeepSkyStacker tutorial). The black and white images were then placed into RGB color channels in Photoshop, and processed extensively to create the image of M51 shown above.

To learn about how I process my deep-sky astrophotography images in Adobe Photoshop, be sure to check out my premium image processing guide. I used a third-party plugin called Topaz Labs Denoise AI to help smooth out the subtle areas of color noise in the final image.

You can also view the complete astrophotography details of this image on AstroBin.

Here is an image of the telescope used for the photo above. The Sky-Watcher Esprit 150 has a focal length of 1050mm at F/7. 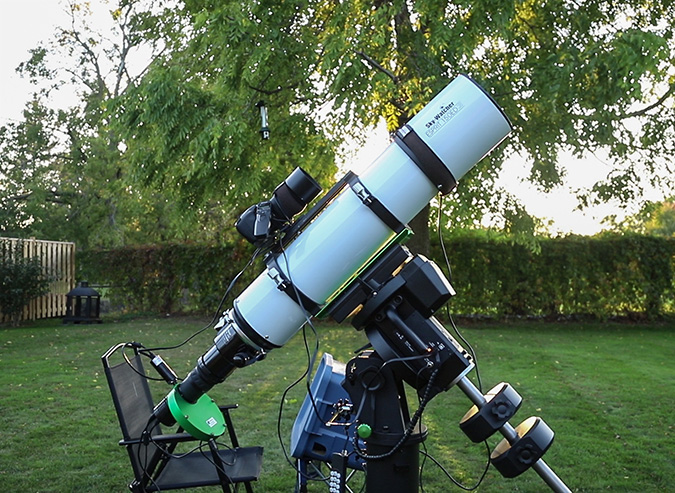 I have been pointing my telescope towards Messier 51 for nearly 10 years. I have made steady progress over time, and the images keep getting better as I hone my image acquisition and processing skills.

Here is an older photo of M51 captured using my 8″ Orion F/4 Newtonian Astrograph Telescope. At this focal length (800mm) you can see much more of the surrounding space in Canes Venatici. 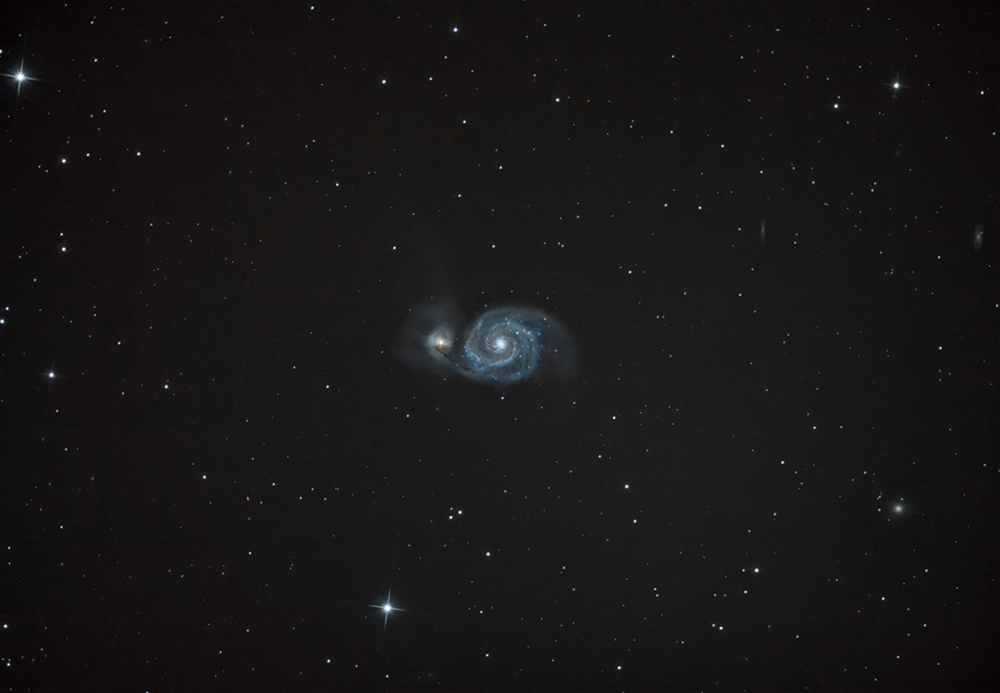 The Whirlpool Galaxy photographed on May 18, 2014.

The image above was captured using my Orion 8″ F/4 Astrograph Newtonian telescope on a Sky-Watcher HEQ5 computerized telescope mount. A Canon EOS Rebel DSLR camera was attached to the telescope to capture 30 x 3-minute exposures at ISO 1600.