Orion’s Belt is a popularly known grouping of stars (asterism) in the night sky. It consists of three bright stars within the constellation Orion.

It is easy to find Orion’s Belt in the night sky in the fall and winter months from the northern hemisphere. You can use this pattern of three stars to help you locate other stars and deep-space objects nearby. 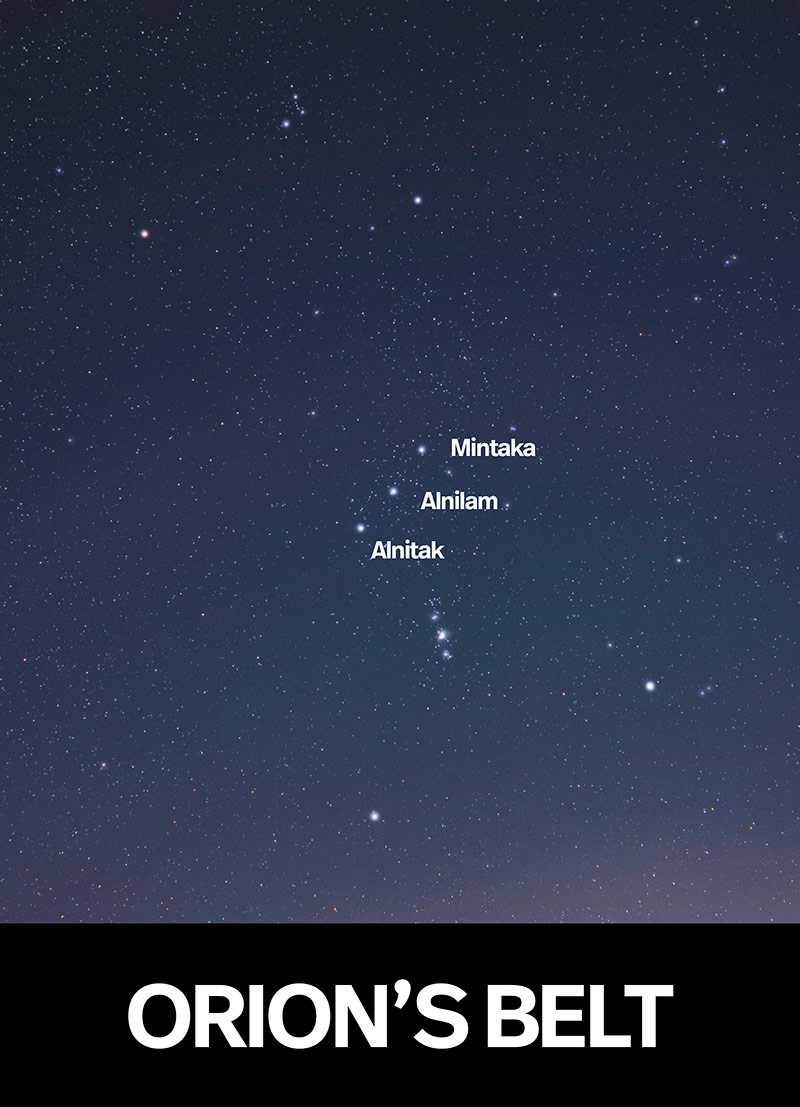 The stars in Orion’s Belt are Alnitak, Alnilam, and Mintaka.

You probably don’t get to stare at the night sky very often. I know I don’t. With all the late-night shifts, regularly replaced by sleeping on time to attend a morning lecture, it’s been a while. But this was not always the case with our ancestors.

They wondered a lot. They observed a lot more. Greek travelers staring into the night sky cooked up all sorts of stories about what the stars meant and represented. They used stars for navigations; medieval versions of Google Maps.

Particularly, they used constellations of stars. Out of 88 of these constellations, Orion is one of the most famous. It’s a bunch of stars that together, look like a hunter with a club and a shield.

Orion, in Greek mythology, was a giant hunter. He was the son of the water God Poseidon and King Minos’ daughter. He was killed by a giant scorpion and placed amongst the stars on behest of his lover.

But what gets this constellation the fame that it has is the rarity that we see in the three stars in the middle of the constellation.

Seemingly arranged in a completely straight line, these stars look like the hunter’s belt. Thus the name, “Orion’s belt.”

This belt is what makes Orion so easy to locate in the night sky. Just look for three stars closely together in a straight line and voila, you’ve located Orion constellation.

Another easy method to locate this constellation is to look for the armpit and the knee. These two stars are particularly bright; and the ‘armpit’ has a red color. But this article is just about Orion’s belt.

Let’s leave the rest to another time, some other day. 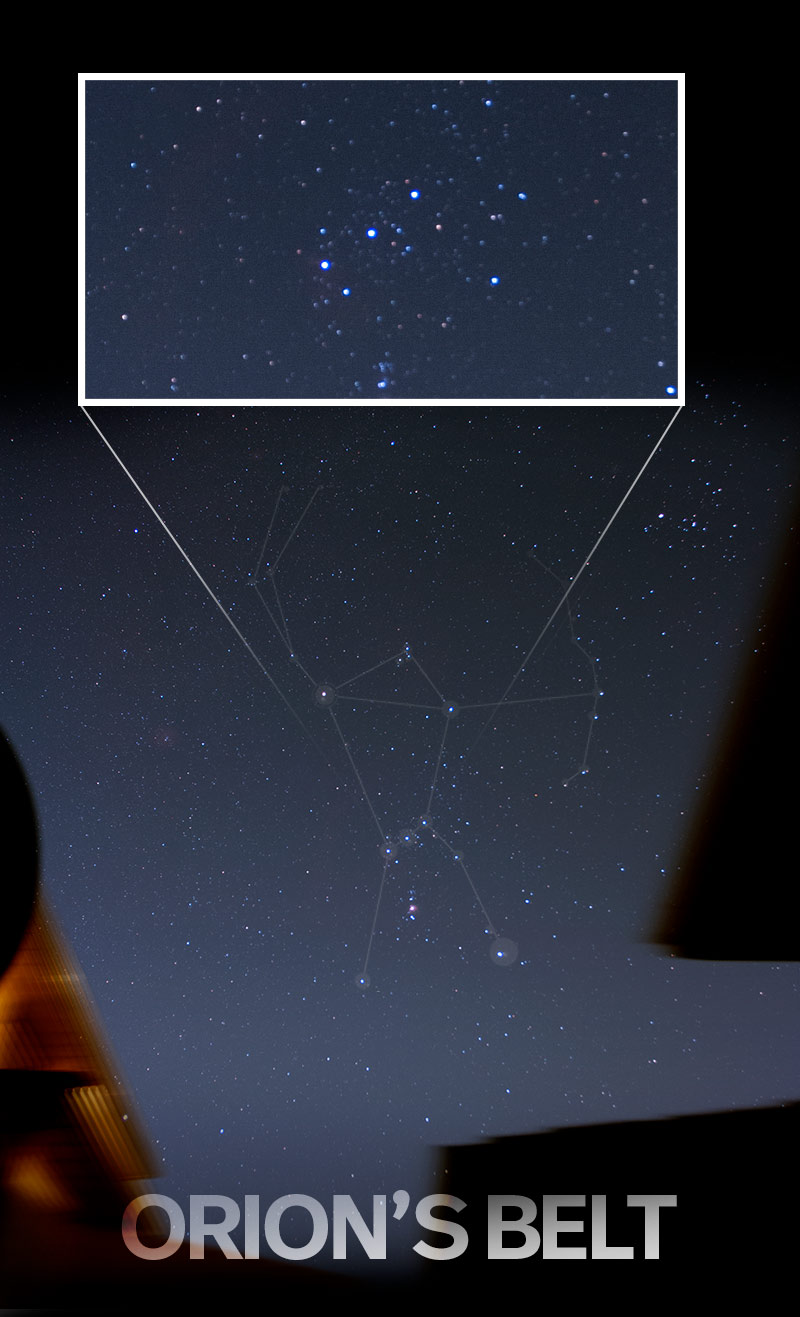 As apparent from the image attached, Mintaka is the top-most or the Western star of Orion’s belt. It’s not really a star but rather a system of multiple stars that are so close together that it appears as one singular entity.

But note that on a cosmic scale, “close together” means a few light-years away. That’s how far light spreads and when it finally reaches us, it appears as one bright dot. The primary star in this system is called Mintaka Aa1.

It’s 24 times as heavy as our sun. The biggest part of the Mintaka star system is a set of two stars that orbit each other almost every 6 days. But there are a total of four that constitute the system.

Some astrophysicists, however, only consider Mintaka to be constituted by the two major stars we just talked about; a class 9.5 giant star and B main-sequence star. In either case, the complete system that we observe as Mintaka is about 1200 light-years away from us, and has been the guiding compass for ancient travelers for centuries. 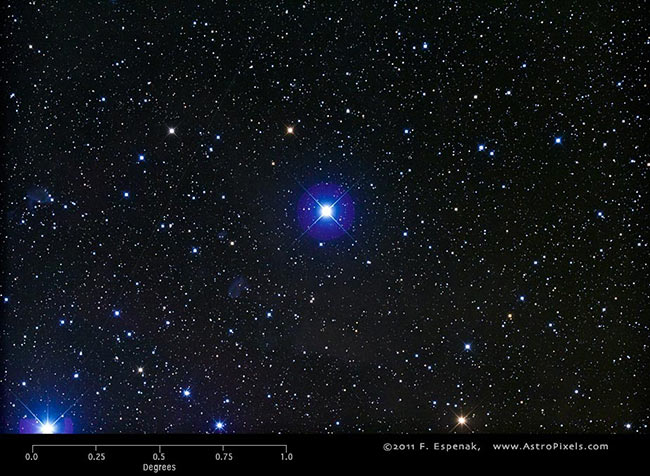 Alnitak has a characteristic bright blue color. This color is caused by a blue supergiant, Anitak A, which is the primary star of the system. It happens to be a class O supergiant – some of the brightest stars visible in the night, and it’s around 30 times as big as our sun.

But while it may be the star of the show (pun intended), it can’t overshadow Alnitak Ab, a 7.2 million-year-old blue dwarf, probably the oldest star in Orion’s belt.

It just keeps getting better. Alnilam is the Eastern-most star of Orion’s belt and happens to be the 29th brightest stars visible in the night sky. It’s around 60 times as massive as our sun.

While it may be … huge as heck, it’s still relatively young. The star is estimated to be 5.7 million years old, way younger than mammals and Earth.

The stars in Orion’s belt are all probably twins, on a cosmic level of course; meaning that they were born around the same time and formed from the plasma clouds within the same region that we now know as Orion’s belt.

Considering Alnilam’s size and trajectory of expansion, it is estimated to turn into a red giant and explode in the future. But there’s nothing new about it, stars explode all the time. Even our sun will explode some time as well.

But before it does, we’ll get to see our possible doom in Orion’s belt. The explosion will be visible from Earth in the night sky. 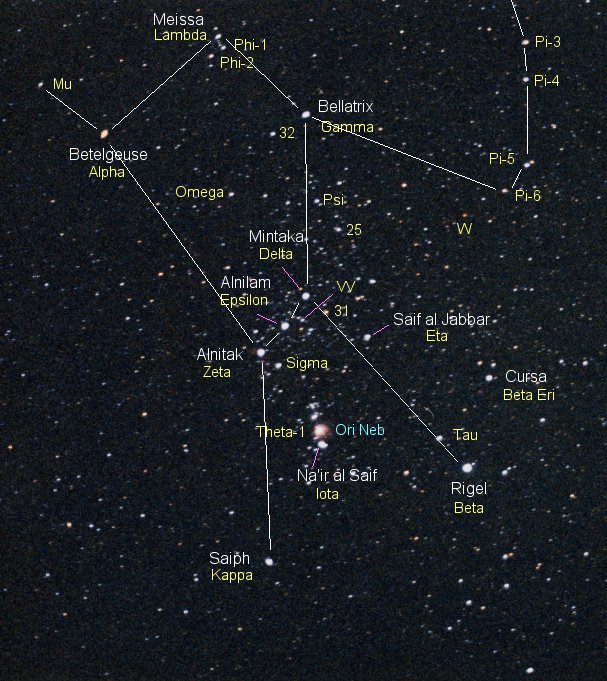 Orion Star Chart including the location of Alnilam in Orion’s Belt. Kim Kaler.

The Orion Nebula is in “Orion’s Sword“, below the belt of Orion. Together, these deep-sky objects provide a wonderful opportunity for astrophotography with a wide-field telescope or telephoto camera lens. 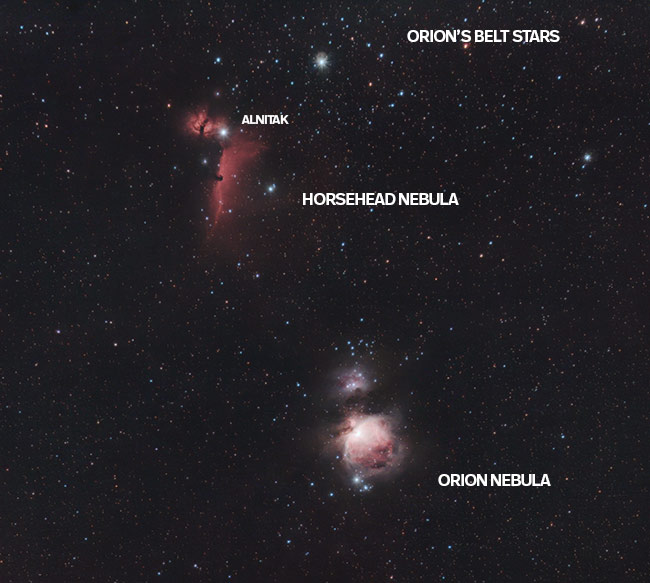 You can use the three bright stars in Orion’s Belt to help you find other noteworthy stars in the night sky. For example, by following a straight line in either direction of the belt stars, you will find Sirius on one side, and Aldebaran in Taurus on the other.

Every time you look up at the sky and notice Orion’s belt, you are looking back in time at distant stars that are more than a thousand light-years away. 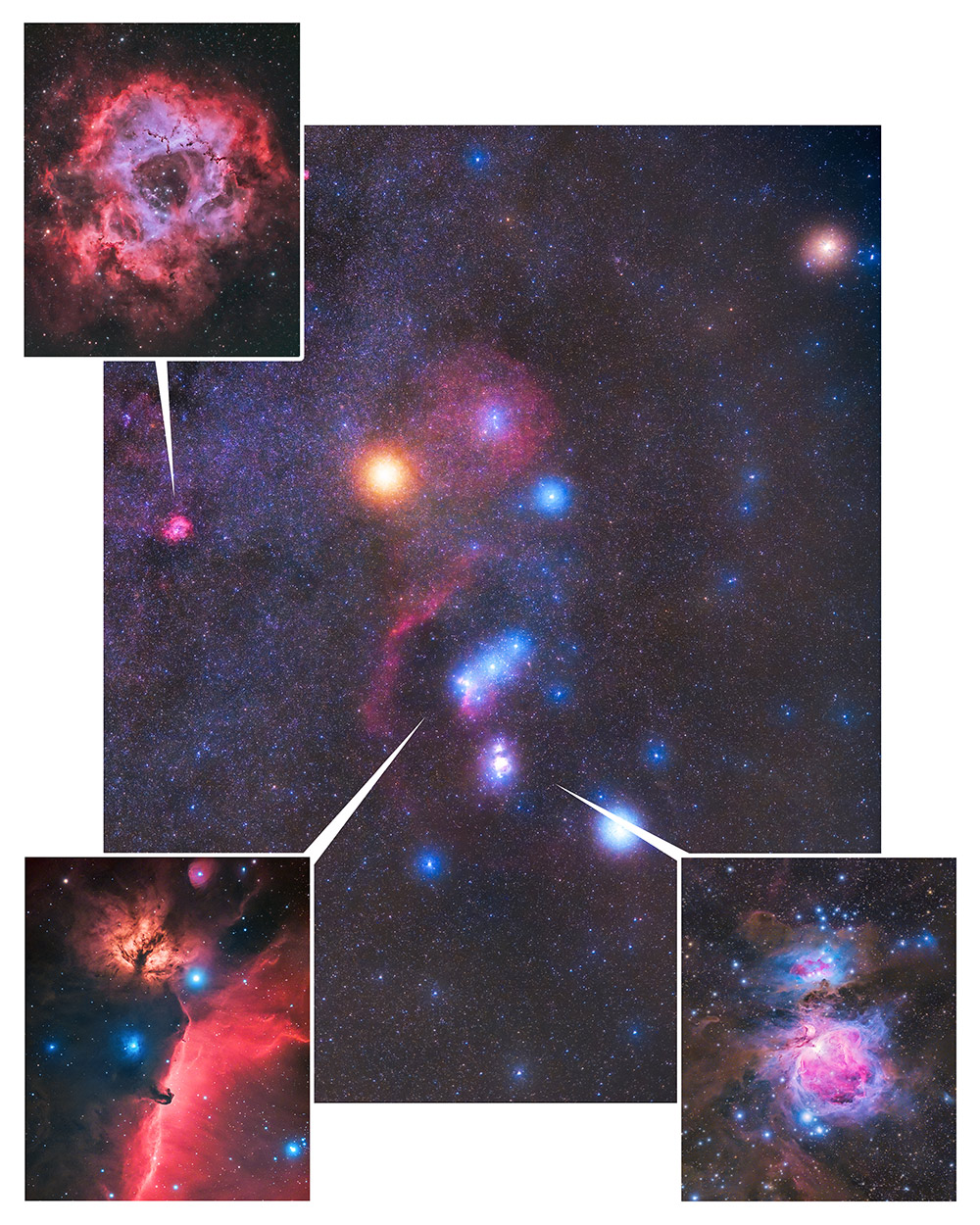