By belonging to the zodiac this constellation is one of 12 that is crossed by the plane of the ecliptic. Taurus is the 17th largest constellation in the sky, occupying an area of 797 square degrees.

Taurus is one of the 48 constellations cataloged by the Greek astronomer Ptolemy in the second century. However, this constellation dates back to the Bronze Age making it one of the oldest. 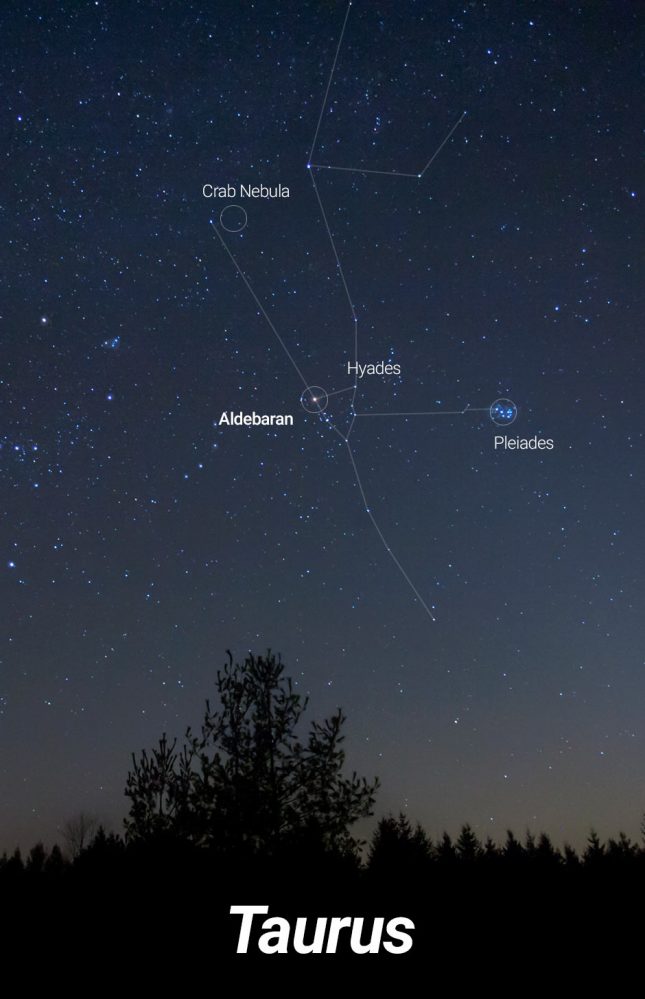 Taurus is famous for the bright stars Aldebaran, Elnath, and Alcyone.

Aldebaran gets its name from the Arabic word al-dabarān meaning the follower. This is because Taurus follows the Pleiades or Seven Sisters across the sky. Aldebaran can be easily be found in the sky because it lies in the vicinity of the Orion constellation. The three bright stars that form Orion’s Belt point towards Aldebaran.

Aldebaran aids in finding the famous Hyades cluster. This is because Aldebaran appears to be the brightest star within it. However, Aldebaran is not a member of the cluster but simply lies in the same line of sight. The Hyades cluster is much farther away, about 150 light-years from Earth.

Aldebaran forms the bull’s bloodshot eye, which has been described as “glaring menacingly” at the hunter Orion.

The second brightest star in Taurus is Elnath. Elnath has a magnitude of 1.68. It is a blue-white giant star that lies approximately 131 light-years away.

Elnath is 700 times more luminous than the Sun. The star’s proper name, Elnath, Alnath, or El Nath, is derived from the Arabic word an-naţħ, which means “the butting,” referring to the bull’s horns. Like Aldebaran, Elnath lies near the ecliptic and can both be occulted by the Moon.

Alcyone is the third brightest star with a magnitude of 2.87. Alcyone is the brightest member of the Pleiades star cluster. It is a binary star system whose primary member is a blue-white giant star. The system is located some 370 light-years from our solar system. Alcyone was named after one of the mythological Seven Sisters in the Pleiades.

During November in the Northern Hemisphere, the Taurid meteor shower appears to radiate from the general direction of the Taurus constellation. 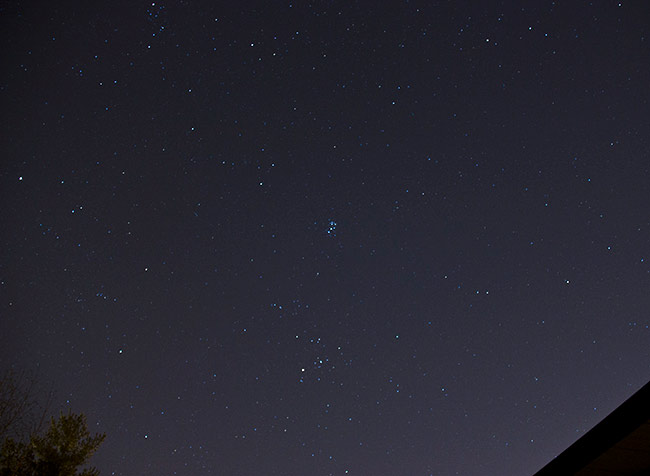 However, viewers in both hemispheres can still see meteors through late November. The meteor shower can be visible for several weeks. The best results will happen in the early morning, just before dawn from any dark location. The Taurids are visible practically anywhere on Earth, except for the South Pole.

Taurus is the home of two very famous Messier objects or sky clusters. The most famous of the two is the Pleiades or also known as the Seven Sisters.

The Pleiades is an open cluster of about 500 stars, six of which are visible to the naked eye. All of these stars were formed by the same cloud of gas about 100 million years ago. The seven brightest stars are named after the seven daughters of Atlas. Atlas is the titan in Greek Mythology who holds up the sky.

At a distance of only 390 light-years, it is one of the closest open clusters to earth. 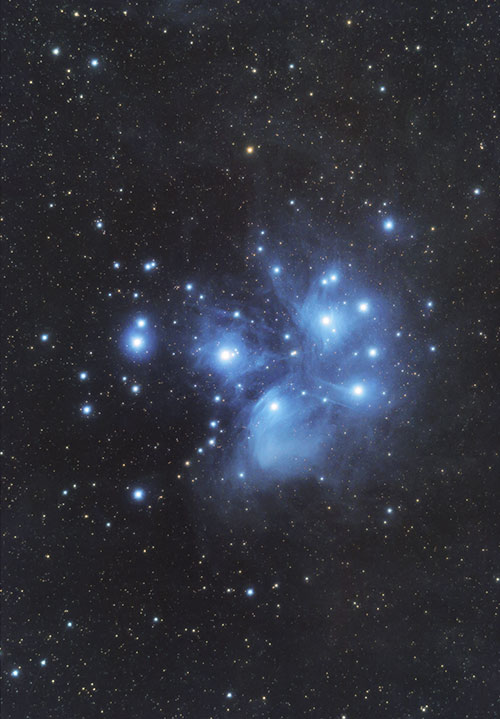 The Pleiades Star Cluster in Taurus.

The other famous Messier object in Taurus is the Crab Nebula. The Crab Nebula is a supernova remnant that formed only about a thousand years ago in the year 1054 CE. It was formed when an old star blew itself apart in a catastrophic explosion.

Another notable star cluster in Taurus is called Hyades. This open cluster contains approximately 200 stars. This cluster is found within the horns of the bull. Taurus contains a number of other deep-sky objects that are too dim to be seen with anything other than a large telescope.

These include a variable nebula known as Hind’s Variable Nebula, a pair of colliding galaxies known as NGC 1410 and NGC 1409, a planetary nebula known as the Crystal Ball Nebula, and a diffuse reflection nebula called the Merope Nebula. 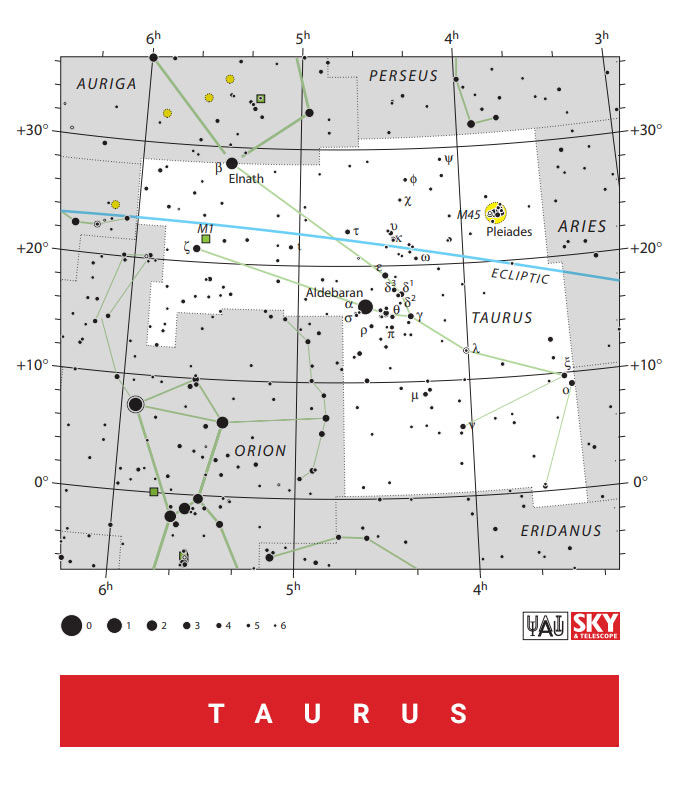 See all of the constellation star maps from the IAU here.

The constellation Taurus can be seen during the winter and the early spring in the northern hemisphere. Taurus is one of the more recognizable constellations in the sky. The V-shape of the horns in very easy to find and can be seen even in urban areas.

Taurus is located in the first quadrant of the northern hemisphere (NQ1). It is visible at latitudes between 90 degrees and -65 degrees. It is a large constellation covering an area of 797 square degrees.

The zodiac is a circle of 12 constellations creating a celestial longitude that is centered upon the path of the sun known as the ecliptic. Taurus lies along the path where the Sun travels in the sky during the year. To see Taurus, start by looking along the sun’s path.

Once you are familiar with the sun’s path let the three Belt stars of the constellation Orion guide your eye. In late November to early December, Taurus reaches opposition, furthest point from the Sun, and is visible the entire night. By late March, it sets at sunset. Taurus completely disappears behind the Sun’s glare from May to July. 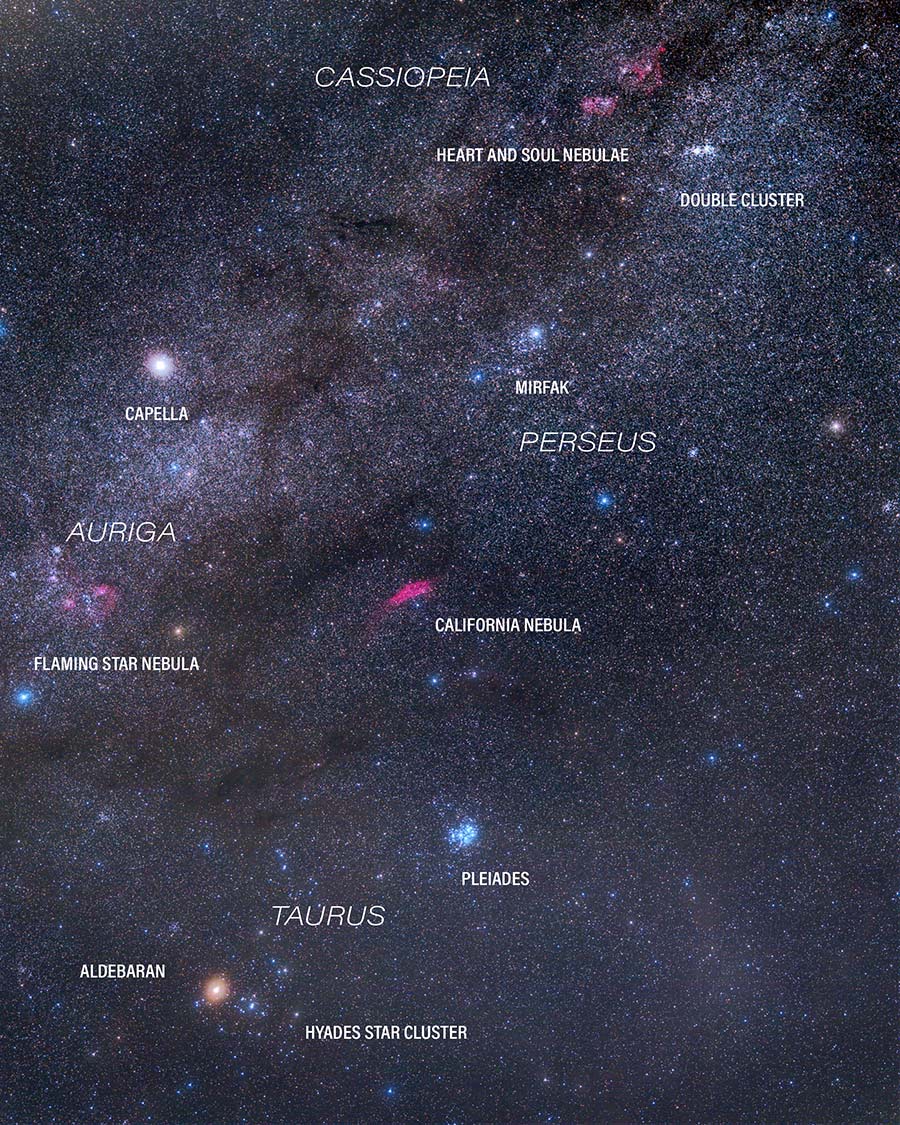 The Origin of Taurus

It is an ancient constellation dating back to the Bronze Age, where it marked the location of the Sun during the spring equinox. Its importance to agriculture influenced the mythology of many ancient civilizations including Sumer, Assyria, Babylon, Egypt, Greece, and Rome.

Depictions of the constellation along with the Pleiades, have been found in cave paintings dating back to 15,000 BC.

In Greek mythology, Taurus is associated with Zeus. Zeus adopted the shape of a bull and seduced Europa, daughter of King Agenor, the King of Phoenica. One day Europa saw a majestic white bull grazing near her father’s herd. 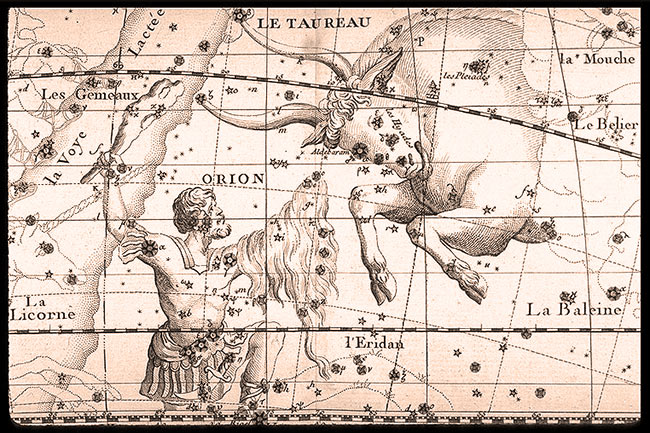 The Constellation Taurus from in the Great Celestial Atlases.

When she climbed on its back, the bull whisked her off to Crete where he revealed himself as Zeus. They had three sons, one named Minos who grew up to be the King of Crete. Zeus eventually commemorated the bull by placing it among the stars in the sky. In another tale, Zeus is said to have turned Europa into the constellation when the two were nearly discovered by the goddess Hera.

Babylonian astronomers referred to the constellation as the “Heavenly Bull.” In the Epic of Gilgamesh, one of the earliest literary works from Mesopotamia, Gilgamesh faces the Bull of Heaven. This Bull is sent by the goddess Ishtar to kill the hero after he had rejected her advances. Gilgamesh is sometimes associated with the nearby Orion. The two constellations are depicted as Gilgamesh and the bull in combat. 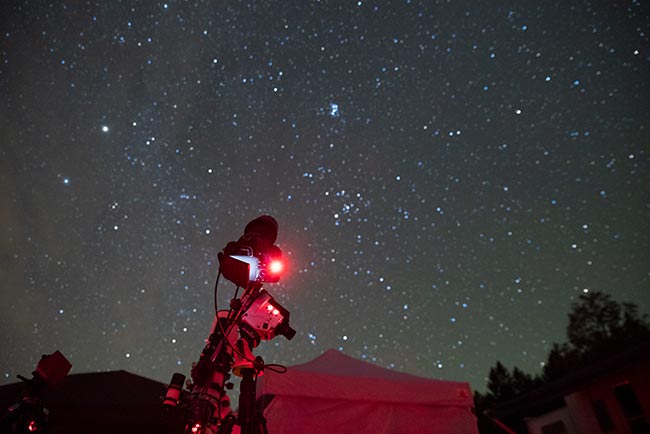