Perseus is the 24th largest constellation in the northern sky, named after the Greek mythological hero Perseus.

The celestial hero Perseus boarders the constellations Aries and Taurus to the south, Auriga to the east, Cassiopeia to the north, and the Andromeda galaxy to the west. 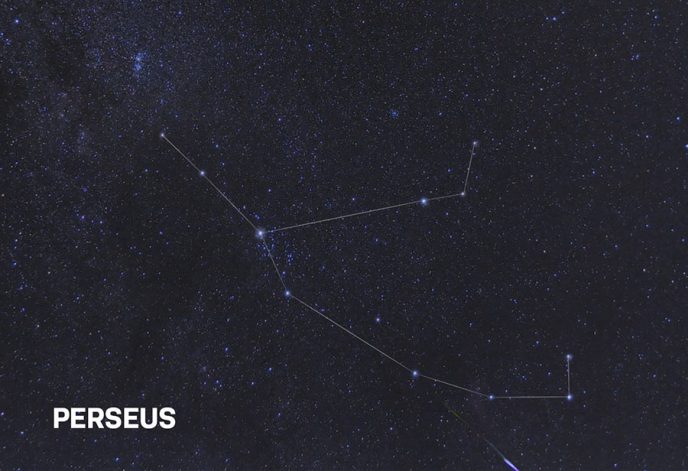 Perseus occupies an area of 615 square degrees. It is located in the first quadrant of the northern hemisphere (NQ1) and can be seen at latitudes between +90° and -35°.

It is one of the 48 ancient constellations listed by the 2nd-century astronomer Ptolemy, and is part of the 88 modern constellations defined by the International Astronomical Union (IAU).

Perseus is best spotted in the northern hemisphere’s fall and winter sky. The galactic plane of the Milky Way passes through Perseus.

Each year the Perseid meteor shower appears to radiate from the Perseus constellation during the months of July through August. 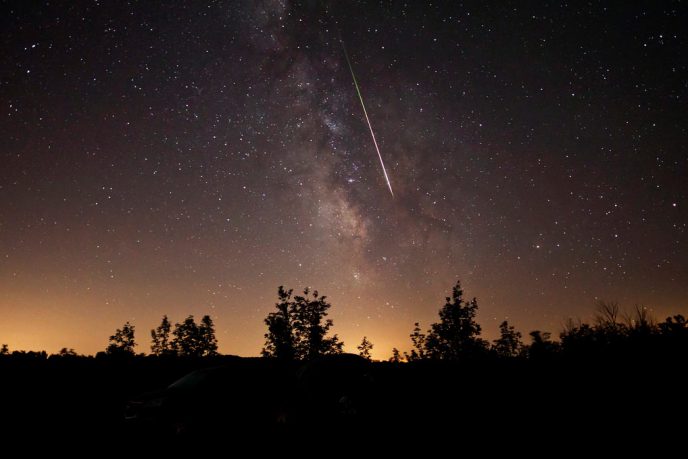 It is one of the most reliable celestial shows that has been observed for about 2,000 years. The Perseids are associated with the comet Swift-Tuttle, a periodic comet that has an orbital period of about 133 years.

The shower is caused by Earth’s passage through debris left over from this comet, which last passed closely by Earth in 1992.

The debris comes into our atmosphere at 133,200 mph (214,400 km per hour) and burns up forming the meteor shower.  From the meteors’ trajectory, the shower appears to originate from the Perseus constellation.

Video: How to find Perseus

The Stars of Perseus

Although there are many stars within the constellation of Perseus, there are roughly 17 stars that constitute the outline of the constellation.  Listed Below are a few of these particular stars beginning with Perseus’ most renowned star Beta Persei.

Beta Persei is also referred to as Algol, from the Arabic Ra’s al-Ghul, meaning The Demon’s Head.  Beta Persei is located 92.8 light-years from Earth.

It can vary in apparent magnitude from 3.5 to 2.3 over a period of 2.867 days. The star system is the prototype of a group of eclipsing binary stars named Algol variables. However, it has a third member making it a triple star system.

The brightest component is a blue-white main-sequence star of spectral type B8V, which is 3.5 times as massive and 180 times as luminous as the Sun. 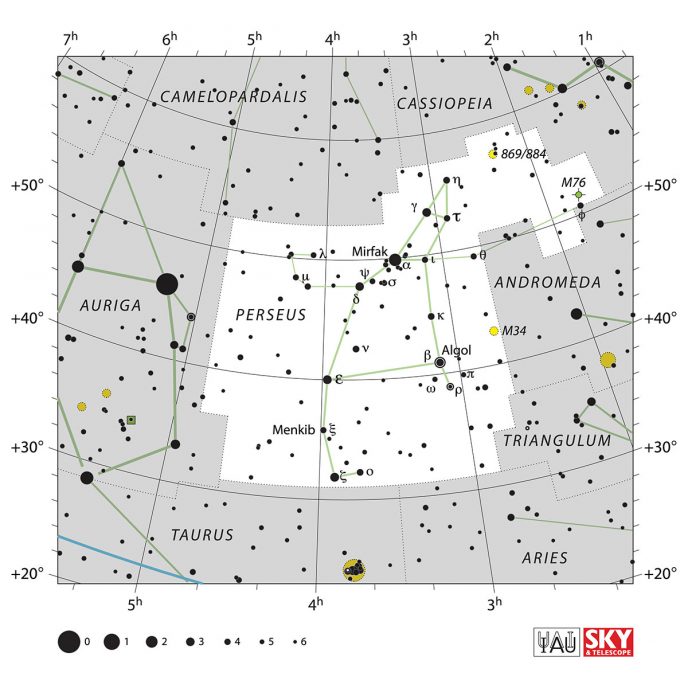 The secondary component is an orange subgiant star of type K0IV that has begun cooling and expanding to 3.5 times the radius of the Sun.

These two are separated by only 0.05 astronomical units (AU)—five percent of the distance between the Earth and Sun; the main dip in brightness arises when the larger fainter companion passes in front of the hotter brighter primary.

The discovery of Algol’s binary nature and a closer look at its components shook one of the fundamental beliefs in stellar evolution, which says that stars’ rates of evolution depend on their mass.

Even though Algol A is more massive, it is still on the main sequence, while Algol B is less massive yet already in the subgiant evolutionary stage.

This is because the more massive star-filled its Roche lobe when it became a subgiant and most of its mass was transferred to the other star. (The Roche lobe is the space around a star in a binary system within which orbiting material is gravitationally bound to the star.

If the star expands beyond this region, the material can escape its gravitational pull.) 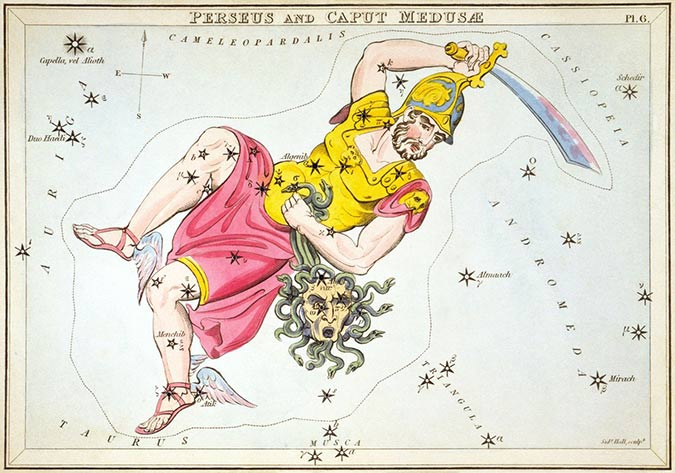 Perseus carrying the head of Medusa the Gorgon, as depicted in Urania’s Mirror. Wikipedia.

Alpha Persei is a supergiant star belonging to the spectral class F5 Ib.  It is the brightest star in the Perseus constellation. It is approximately 590 light-years distant.

It is located in a star cluster known as the Alpha Persei Cluster, which can be seen in binoculars. Alpha Persei has 7.3 solar masses and is about 60 times the size of the Sun.  The star’s traditional names, Mirfak or Algenib, is Arabic for elbow.

Zeta Persei is the third brightest star in the constellation.  Zeta Persei is a blue-white supergiant star belonging to the spectral class B1 Ib. It is about 47,000 times more luminous than the Sun.

It has an apparent magnitude of 2.86 and is approximately 750 light-years distant. The star has a 9th magnitude companion located 12.9 arc seconds away.

The two stars are suspected to be physically associated because they share the same proper motion and are on a similar trajectory.

Epsilon Persei is composed of several stars. The system has a combined visual magnitude of 2.88 and is about 640 light-years distant from the Sun.

The primary star in the system is classified as a Beta Cephei. The two main components in the Epsilon Persei system orbit each other with a period of 14 days.  The primary component is a main-sequence star belonging to the spectral type B0.5V.

The secondary star belongs in the spectral range between A6 V and K1 V and is much smaller than the primary component.

Gamma Persei is a double star with a combined visual magnitude of 2.93, approximately 243 light-years distant from Earth.  It is the fourth brightest star in Perseus.

Gamma Persei is composed of a giant of the spectral type G9 III and a companion star.  The system is a wide eclipsing binary star, with the two stars orbiting each other every 14.6 years.

Delta Persei is a binary star with a visual magnitude of 3.01, approximately 520 light-years distant.  It belongs to the spectral class B5 III, which makes it a blue-white giant star. The star is a rapid rotator, with a projected velocity of 190 km s–1.

Rho Persei is classified as a semiregular Mu Cephei type variable star.  The star’s traditional name, Gorgonea Tertia, refers to the myth of Perseus and the Gorgons.

Rho Persei is visible to the naked eye. It has an apparent magnitude of 3.39 and is about 308 light-years distant.

The star belongs to the spectral type M4 II, which means that it has reached the asymptotic giant branch stage of evolution, and is near the tip of the red giant branch.

Rho Persei is five times as massive as the Sun and has a radius 150 times solar.  It is 2,290 times more luminous. The star’s estimated age is about 440 million years.

Eta Persei belongs to the spectral class K3 and is approximately 1331 light-years distant from the solar system.  It has a visual magnitude of 3.76 and is about 35,000 times more luminous than the Sun.

Kappa Persei is a triple star system about 112 light-years away.  It is a K0 III class star with a visual magnitude of 3.8. The Kappa Persei system consists of a spectroscopic binary star and a companion in a wider orbit.

Omicron Persei is another spectroscopic double in Perseus.  It consists of a giant star of the spectral type B1 and a dwarf belonging to the class B3.

The two orbit each other with a period of 4.5 days. Omicron Persei is between 1000 and 1600 light-years distant from the solar system and has an apparent magnitude of 3.83.

Xi Persei is a blue giant with a visual magnitude of 4.042, approximately 1800 light-years distant from the Sun.  Its traditional name, Menkib, means “the shoulder” in Arabic.

Menkib belongs to the spectral class O7.5III. It is about 40 times more massive than the Sun and one of the hottest naked eye stars known. It has a surface temperature of 37,000 kelvins.

Iota Persei is a main sequence dwarf of the spectral type G0 V.  It has a visual magnitude of 4.05 and is 34.38 light-years distant from the Sun.

The star has a relatively high proper motion.  It moves at the speed of 92 km/s relative to the Sun.

Theta Persei is a star system composed of a yellow dwarf of the spectral type F7V and a red dwarf belonging to the class M1V, located about 250 astronomical units from the primary star.

The brighter dwarf has an apparent magnitude of 4.12 and the companion of 10. The system is 36.6 light-years distant.

Psi Persei is a main-sequence star belonging to the spectral class B5Ve.  It has a visual magnitude of 4.310 and is approximately 580 light-years distant.

The star can be seen without binoculars. It is classified as a B-class star showing prominent hydrogen emission lines in its spectrum. Psi Persei is a shell star, which means that it is surrounded by a disc of gas at the equator line.

It is a rapid rotator, with an estimated rotational velocity of 390 km/s or more along the equator.

I have personally photographed a number of deep-sky objects in the constellation Perseus using a camera and telescope. The astrophotography cameras I use vary, from a DSLR camera to a one-shot-color dedicated astronomy camera.

Most of the images on this website were captured by myself from a Bortle Scale class 6 backyard. For tips on capturing deep-sky objects in the night sky like the ones shown on this page, please visit the get started page of this website. 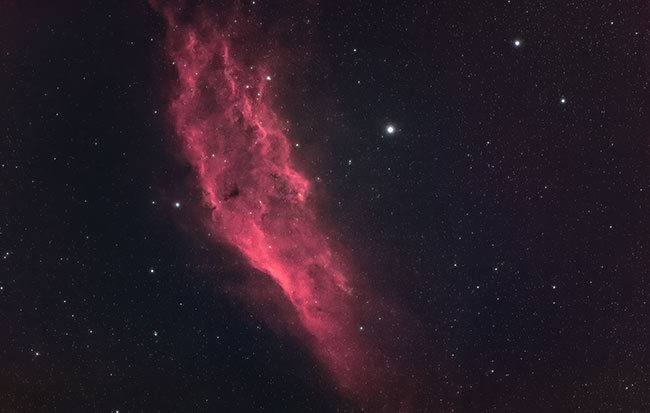 The galactic plane of the Milky Way passes through Perseus but is much less obvious than elsewhere in the sky as it is mostly obscured by molecular clouds.

The Perseus Arm is a spiral arm of the Milky Way galaxy and stretches across the sky from the constellation Cassiopeia through Perseus and Auriga to Gemini and Monoceros. This segment is towards the rim of the galaxy.

Within the Perseus Arm lies two open clusters (NGC 869 and NGC 884) known as the Double Cluster. 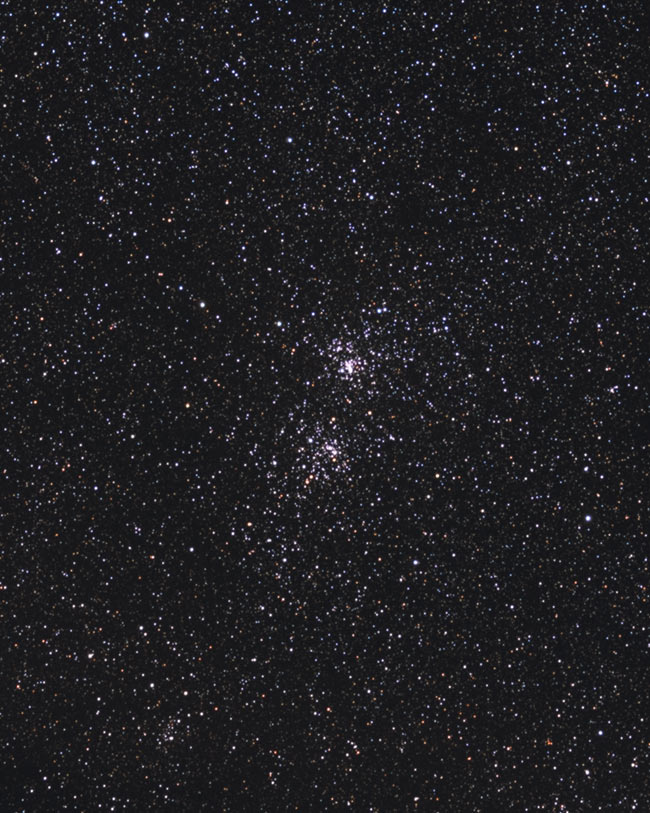 The Double Cluster in Perseus. Photo by Trevor Jones.

Sometimes known as h and Chi (χ) Persei, respectively, they are easily visible through binoculars and small telescopes.

They are 7,600 and 6,800 light-years distant from each other making them relatively close to each other in space.

Their ages are estimated at 3.2 and 5.6 million years making them young.

Each cluster contains more than 300 supergiant stars. Both clusters are moving toward us, at a speed of 21 and 22 km/s.

Messier 34 is an open cluster with a visual magnitude of 5.5, approximately 1,500 light-years distant.

Many brown dwarfs have been discovered in this cluster due to its age; since brown dwarfs cool as they age, it is easier to find them in younger clusters.

In good conditions, it appears as a blurry patch slightly north of the line from Algol to Gamma Andromedae.

The Little Dumbbell Nebula is a planetary nebula in Perseus.  It is also known as Messier 76, the Cork Nebula, and the Barbell Nebula.

The nebula was originally assigned two catalog numbers, NGC 650 and NGC 651, because it was believed to consist of two different emission nebulae.

The Little Dumbbell Nebula is 2.7 x 1.8 arc minutes in size. It is one of the most difficult objects to observe included in Messier’s catalog.

The California Nebula got its name because it resembles the outline of California on a map in long exposure photographs.

It is very difficult to observe visually because its low surface brightness makes it appear dimmer than most other emission nebulae.

It is an emission nebula in Perseus, about 1000 light-years distant. 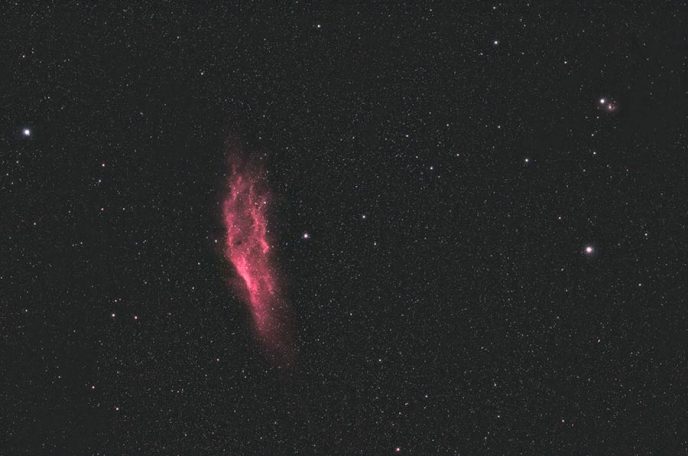 NGC 1333 is a reflection nebula and a star-forming region in Perseus, located in the Perseus molecular cloud.

NGC 1260 is a spiral galaxy. It is notable for being home to supernova SN 2006gy, a supernova event in 2006 that was the second brightest object ever recorded.

NGC 1275 is located at the heart of the Perseus Cluster. The galaxy is a powerful source of radio emission and x-rays, and is believed to have a supermassive black hole at its centre.

The Alpha Persei Cluster is an open star cluster in Perseus. It contains several blue stars, the brightest one of which is Mirfak, Alpha Persei.

Other bright members of the cluster include Delta, Epsilon, and Psi Persei.

The Perseus Cluster is a cluster of galaxies located in Perseus constellation. It is home to thousands of galaxies and one of the most massive objects known in the universe.

3C 83.1B is a radio galaxy in Perseus, located in the Perseus Cluster. Its host is the elliptical galaxy NGC 1265.