The California Nebula is an intense hydrogen emission nebula located in the constellation Perseus. This iconic deep-sky object has been ignited by energetic starlight that has ionized its nebular gas composition.

The California Nebula is designated NGC 1499 in the new general catalog. The most noticeable characteristics of this nebula are its striking resemblance in shape to the US state of California, and red color due to its hydrogen composition. 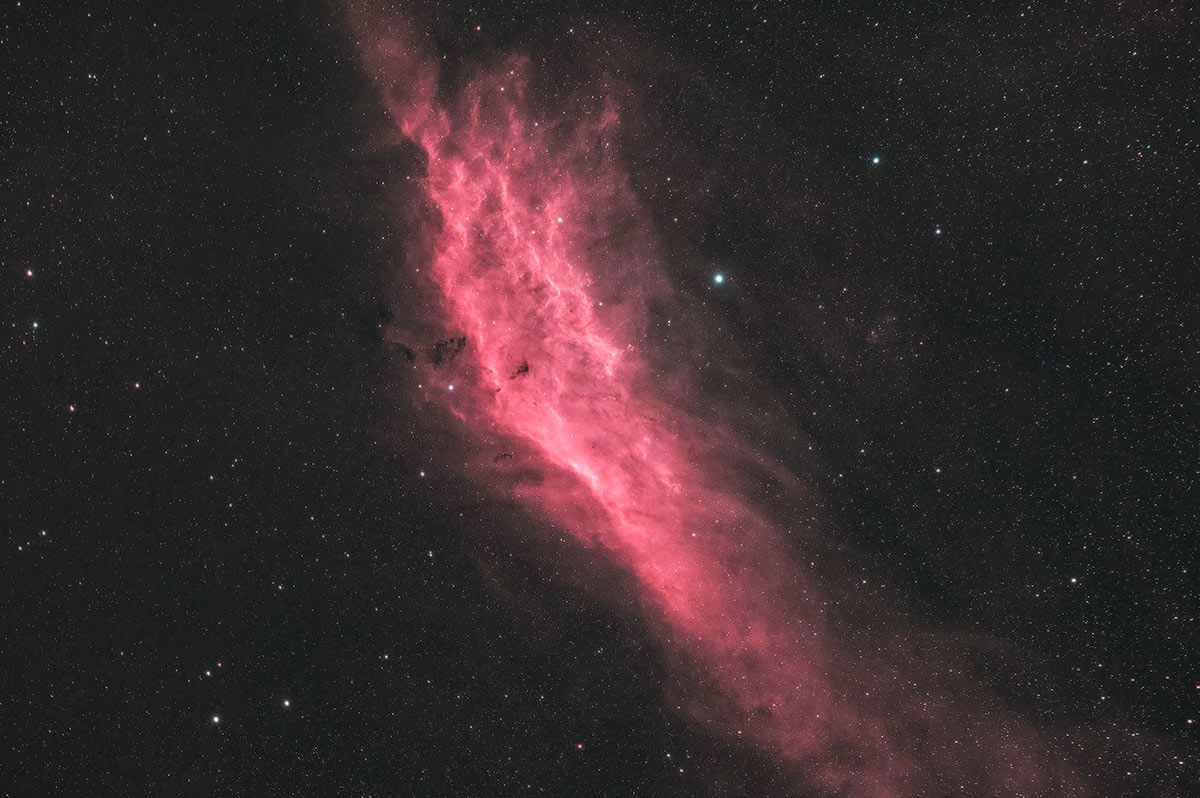 With an apparent magnitude of 6, this deep sky object is a popular target for amateur backyard astrophotographers using a camera and telescope. Similar emission nebulae include the North America Nebula, Heart Nebula, and the Rosette Nebula.

Although this nebula is extremely faint and difficult to observe visually, its alluring color and shape can be fully appreciated through astrophotography.

In the following video, I capture the California Nebula from my backyard using a Canon EOS Ra camera and a 61mm telescope. 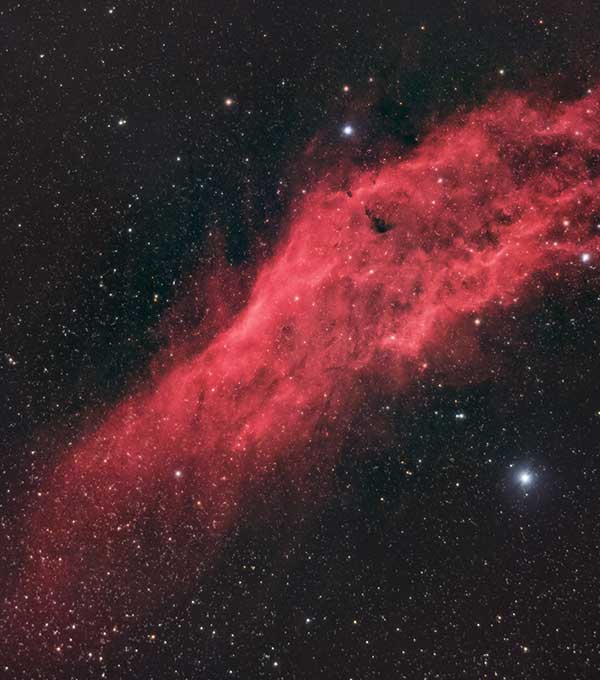 This nebula’s signature reddish glow is thanks to the nearby star, Xi Persei, seen at the lower right side of my image. This luminous blue star (also known as Menkib) is a blue giant that is over 12,000 times brighter than the sun. This massive star ionizes the hydrogen atoms in the California Nebula and is responsible for creating this iconic deep sky object in our night sky.

The image of the California Nebula below was captured using a modified DSLR camera and a Rokinon 135mm F/2 lens. The focal length of this lens is a great fit for NGC 1499 and showcases the massive apparent size of this nebula from our vantage point on Earth.

The camera used an Astronomik CLS CCD clip-in filter to reduce the amount of artificial light collected and create contrast between the nebula and a city sky. 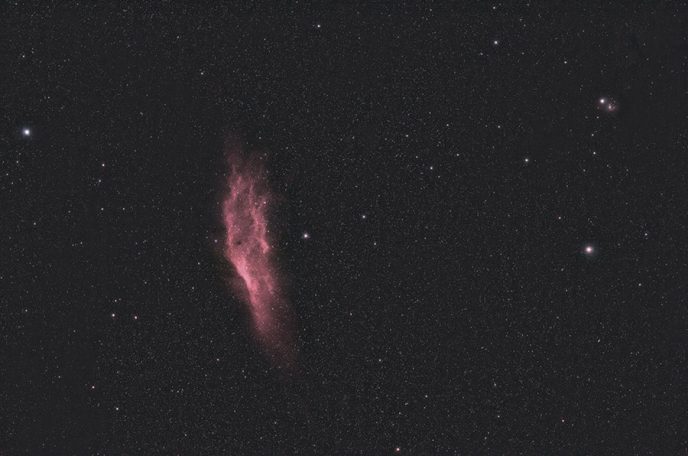 Location and Nearby Deep Sky Objects

The California Nebula’s isolated location in Perseus really makes it stand out in a long exposure wide-angle image. It is the only bright nebula in this area of Perseus and is often included in a wide-angle photo that includes the Pleiades.

To capture an image of this object at this magnification, I used a DSLR camera with a 50mm camera lens attached. The camera and lens were mounted to a star tracker mount (iOptron SkyTracker Pro) that matches the apparent rotation of the night sky for long exposure photography. 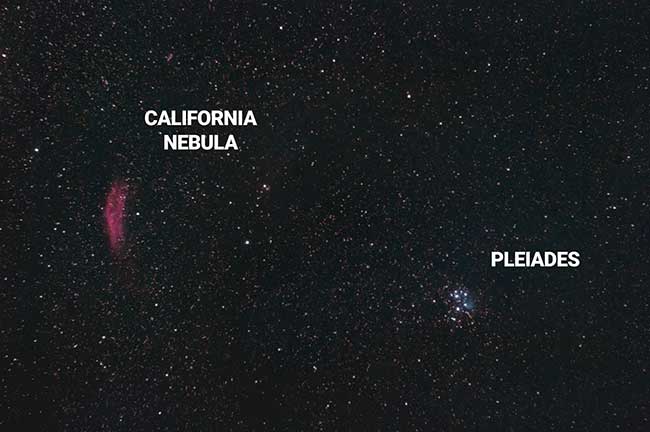 Over the years, I have photographed the California Nebula using a variety of different camera lenses and telescopes. On this page, I’ll share some of the images I have taken, and what to expect when capturing this beautiful cosmic cloud.

The process of photographing the California Nebula (or any other deep-sky object) involves taking a series of long exposure images. This can be accomplished using a traditional DSLR camera, dedicated astronomy camera, or a CCD.

A DSLR camera that has been modified for astrophotography will make a monumental difference in the amount of signal (light) your camera can collect. This is because the default internal IR cut filter inside of your DSLR blocks important wavelengths of light.

A telescope or telephoto camera lens will magnify this object, revealing its unique and beautiful features. The image below shows contrasting views of the California Nebula. The background image was captured with a DSLR and wide-angle (18mm lens), while the inset is the view through a small refractor telescope. 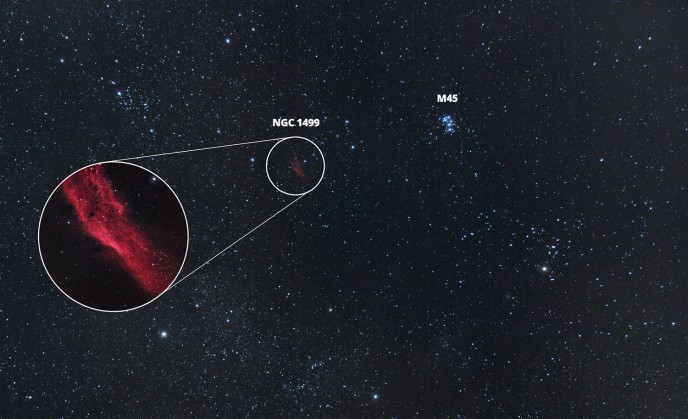 A wide-angle nightscape is a great way to illustrate the California Nebula’s rather unique, isolated position in the night sky, while a deep sky image through a telescope will unlock its feathery details.

A proven method of success for capturing the California Nebula is to collect light using a narrowband hydrogen-alpha filter. When you combine the enhanced contrast and isolation possibilities of an H-Alpha (Ha) filter with a camera capable of collecting light in this wavelength, you can create some exceptional photos. 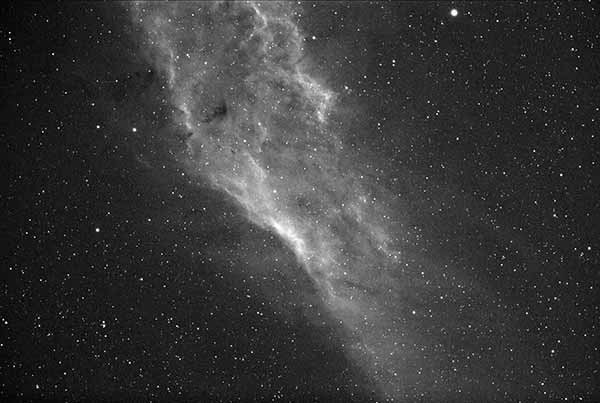 The photo above shows the California Nebula in Hydrogen Alpha only, which is why it appears black and white. A modified DSLR camera with a clip-in Ha filter was used to capture the image above from my backyard in the city.

Isolating the California Nebula to the Ha wavelength showcases the fine details of this nebula by filtering out light pollution and concentrating the signal collected by the camera sensor. The Astronomik 12nm H-Alpha filter was the first narrowband filter I purchased for my DSLR camera, and I highly recommend it. 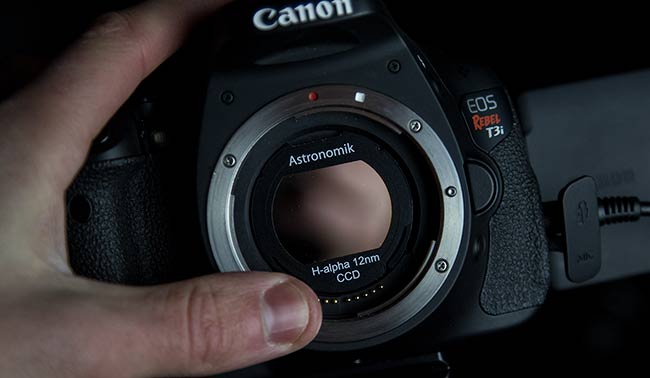 There are a number of ways to create a color image of the California Nebula. A popular method is to collect narrowband details of your target through multiple filters and map them to the RGB channels to build a false-color image. It is best to use a monochrome astronomy camera to do this, as the signal is each exposure will be stronger than it is with a color camera.

Another technique is to simply capture this nebula in true-color (broadband) RGB. This creates an image with an accurate rendition of colors including the many stars surrounding NGC 1499.  To boost the signal of your image, applying additional narrowband data in H-Alpha is recommended, as outlined in the HaRGB tutorial I mentioned earlier. 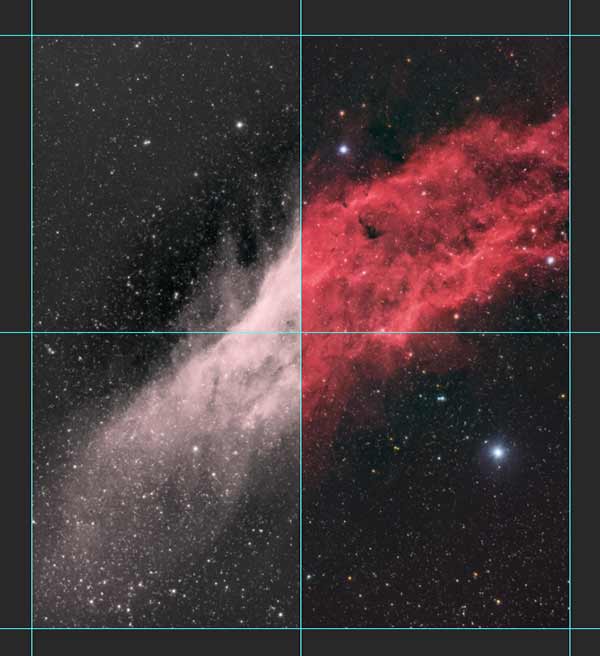 Applying images of the California Nebula captured in the Hydrogen Alpha wavelength to a color image in Photoshop.

Adobe Photoshop allows you to easily align images captured in isolated wavelengths of light to their own color channels. Mapping the H-Alpha details of the California details to the red channel of an RGB image, or as a luminance layer is a power image processing technique.

Related Post: How to align astrophotos in Adobe Photoshop

To create an image with a healthy signal-to-noise ratio, it is wise to register and stack a series of exposures together. For my astrophotography images, I prefer to use DeepSkyStacker (DSS) to handle this process. This process will average the “light” frames (the actual pictures) and subtract dark frames from the final image to reduce noise, and concentrate the signal.

The image that DSS creates can then be processed further to bring out the beauty of your subject. For a much more detailed description of this process, please have a look at my deep-sky image processing tutorial.

The California Nebula is a large deep-sky object, so if you plan on capturing it with a telescope, you will need a wide field of view to capture the entire nebula in a single frame.

Many amateur astrophotographers tackle this challenge by shooting the California Nebula with a telephoto camera lens, such as a 300mm f/4L.

A sound polar alignment and a well-balanced load are essential when taking long-exposure tracked images on an equatorial mount or star tracker. The longer the focal length of the camera lens or telescope used, the more these aspects will come into play.

If you are a beginner looking to photograph the California Nebula for the first time, I would suggest using a wide-field apochromatic refractor telescope in the 400-500mm range. This will not only allow you to frame up the entire object in a single frame but will be rather forgiving in terms of tracking accuracy.

If you’re planning on using a DSLR camera, look into modifying it for astrophotography before attempting this object. Secondly, try using an H-Alpha filter to isolate the rich hydrogen gas this nebula is composed of.