Why I’m Switching to a Mono Astrophotography Camera 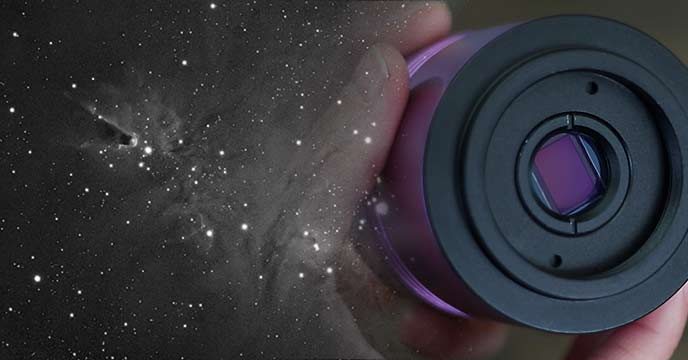 A mono astrophotography camera gives backyard imagers in the city the opportunity to collect dynamic narrowband images from home.  Although LRGB image acquisition using a filter wheel requires some extra setup time early on, the flexibility of this configuration is appealing.

Up to this point, I have not experienced the joys of shooting through a filter wheel. But I have experienced the extraordinary power of a monochrome sensor through narrowband filters. My latest experiences in the backyard have me wondering if I should have switched to a mono astrophotography camera a long time ago…

I’ve Seen the Light, and it’s in Monochrome

Those of you who shoot with a one-shot-color astrophotography camera (such as DSLR) as I did for many years may be hesitant to switch to a camera that spits out black and white images. The satisfaction of a colorful nebula appearing on the back of your camera display screen after a 120-second exposure is why we got into this hobby in the first place.

Make no mistake, a color DSLR camera remains the best option for beginners looking to get started in the deep sky. I’ve spent the past 7 years doing so, and nothing will ever match the enjoyment of capturing objects in space from a dark sky site with a camera and telescope. 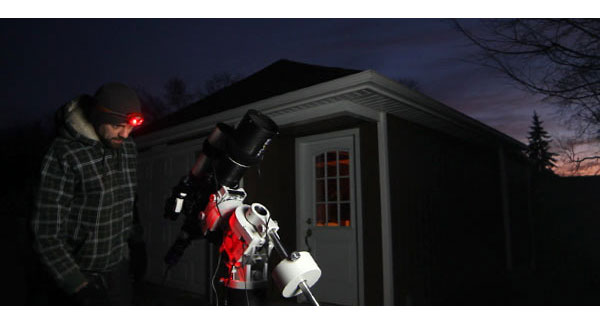 Yet experienced backyard astrophotographers insist that monochrome is the only way to go if you want to get serious about your deep-sky imaging. I took a lot of flak last year when I decided to upgrade from a DSLR to a One-shot-color Altair Hypercam 183C, particularly when shooting through narrowband filters.

The results of my color camera + narrowband experiments were promising, but I knew those 12nm filters were better suited for a mono sensor.

In this post, I’ll tell you why I’ll be shooting with a mono astrophotography camera from this point forward. But first, have a look at the Altair Hypercam 183M in action on the Cone Nebula.

Why do serious amateurs recommend a mono camera over color?

By design, a camera sensor with a color filter array requires you to take longer exposures to record the same level of signal as a mono camera would. By automatically collecting light through your telescope into separate RGB channels as the light is collected, you are sacrificing the full potential of the light you work so hard to collect.

In this article from PhotographingSpace.com, Dillon O’Donnell weighs the pros and cons of using a mono camera for astrophotography over color. In the end, it comes down to a trade-off between convenience and quality.

A color camera will get you to the finish line faster but will hold you back in terms of image quality at a certain point. You may photograph objects through your telescope for years before you reach a point where you feel like your progress has plateaued.

The bottom line is, a color camera is a jack of all trades, master of none.

Let’s get one thing straight, my color astrophotography cameras (DSLR’s) will not collect dust on the shelf as I begin to focus on capturing images in monochrome. Creating beautiful full-color images of space will always be my primary goal.

For most projects, I simply don’t have the time (clear skies) to collect all of my data using a monochrome camera with the necessary filters. In a nutshell, I’ll capture color images around the new moon, and narrowband mono images the rest of the time.

I’ll never stop shooting in color with a DSLR, but new monochrome data will give my existing color images a real boost.

Won’t it take three times longer to produce an image?

The added time involved with a mono astrophotography camera has been labeled a “myth” by some of the CCD manufacturers.  Until I invest in a filter wheel and run through the entire process for myself, I can only speculate that this simply can’t be true.

It’s possible that the overall image acquisition process time could be shortened due to the fact that more light is collected in each sub. Manually swapping out filters for each channel would tip the scales the other direction, but an automated setup including a filter wheel would speed this up. 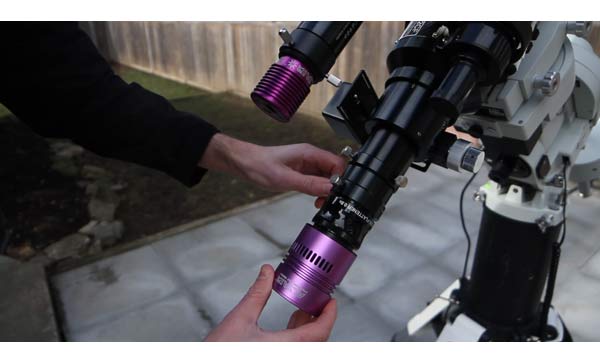 I thought a cooled CCD was the only way to go?

Everybody knows that a cooled CCD camera is the best choice for serious deep-sky astrophotography, what’s all this about CMOS sensors (that DSLRs use)?

Advances in CMOS technology have the latest astrophotography cameras that use CMOS sensors performing nearly as well as the coveted CCD. If you’ve been calling a non-DSLR dedicated astronomy camera a CCD, you’re not alone. Many software applications such as Astro Photography Tool label these CMOS astronomy cameras as a “CCD” to distinguish them from a DSLR camera.

CCD cameras vary in price by a wide margin, from the tiny Orion StarShoot G3 Deep Space Camera to “the ultimate in astronomical imaging”, the SBIG STX-16803.

For a wealth of information about CCD cameras, have a look at this video from Atik Cameras.  Stephen Chambers, of course, references cameras from the Atik line, but much of the information he shares applies to all astronomy cameras.

After several years of photographing deep-sky targets in color through a Bayer filter,  I am now realizing the difference a camera with an improved quantum efficiency makes.

As you may have guessed, my heart once belonged to one-shot-color DSLR astrophotography. But, I am quickly realizing how a monochrome astronomy camera can give backyard imagers a tremendous advantage. It’s hard to imagine shooting with a color camera with a narrowband filter now that I have seen how much more detail can be acquired in mono.

Benefits of a monochrome camera:

Have a look at this infographic shared by Atik Cameras. 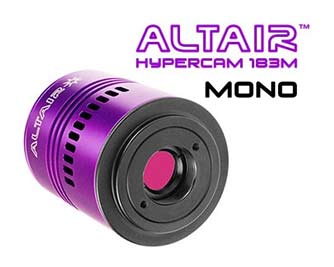 Today, I have in my hands a new Altair Hypercam 183M astronomy camera. This camera uses a monochrome Sony IMX183 sensor that can also be found inside cameras from ZWO and QHY.

The Altair Hypercam 183M camera lacks thermo-electric cooling, which is a big reason it is more affordable than its cooled mono competitors.

Even without a TEC system, the Hypercom sensor remains remarkably cool during a long exposure imaging session thanks to the open body design and fan cooling.

I put the Hypercam internal fan design to the test last summer on the 183C, and I was impressed at the difference it made. On the hottest summer nights, the DSLR remained on the shelf while the Hypercam pressed on.

The Altair Hypercam 183 requires the appropriate drivers to operate.  You can download them from cameras.altairastro.com. 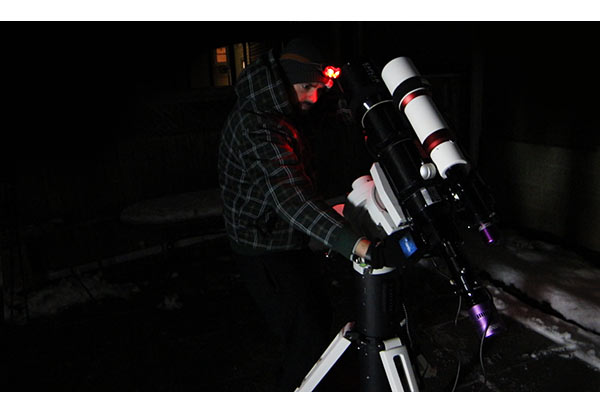 I once believed that moving to a darker location was the only way I would be able to photograph faint and challenging targets. When you couple narrowband filters with a highly sensitive mono CMOS sensor, you’ve got what it takes to break through even the worst city light pollution.

For now, I’ll focus on capturing luminance data or isolated narrowband gas details with the 183M. I can apply this new data to existing deep sky color photos for some added punch. Moving forward, adding a filter wheel to the mix will allow me to create completely new versions of my favorite objects. 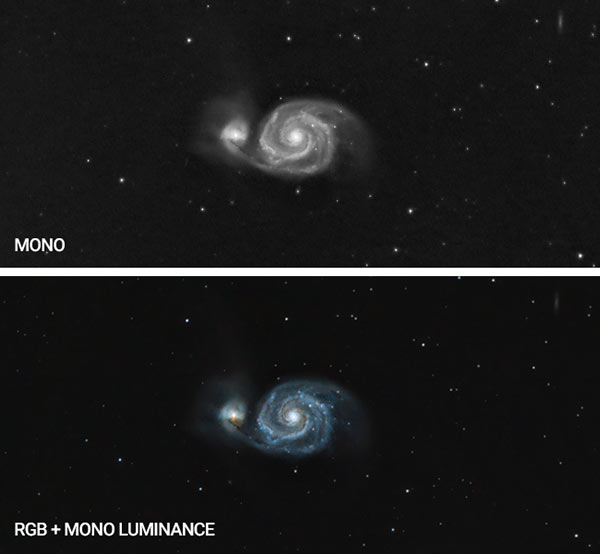 I’ll be sure to create a new Photoshop tutorial in the future that includes the process of adding a luminance layer to existing color images. The added “light” can make a dramatic impact on your images and provide some much-needed contrast and clarity to your photos. It is especially effective on nebulae with plenty of hydrogen gas.

The Cone Nebula is a tough shot to get from a red/white zone. My previous attempt using a color camera and a telescope (and hindsight) that wasn’t a good fit for an object this size, did not go so well. The chip size of the 183M is a good match to the focal length of my ED102 refractor telescope. (714mm @ F/6)

This time, however, my Explore Scientific ED102 was called into action, with the Altair Hypercam 183M attached. Also, I decided to sacrifice instant color gratification for more details. The image was shot the day after the full moon, and it was shining uncomfortably close to my target during this session. 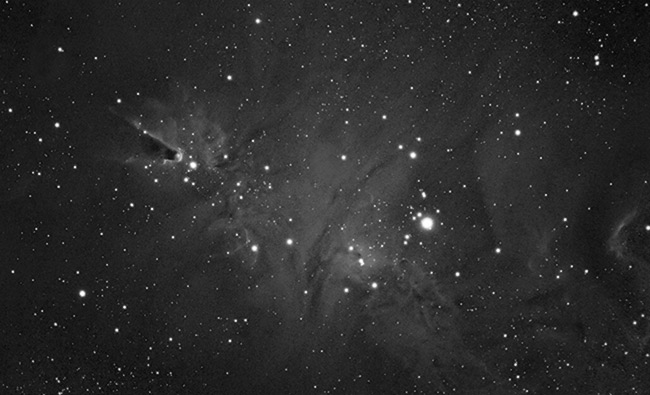 For the image above, I used an STC Optical duo-narrowband filter that isolates both Ha and OIII and blocks out almost all other wavelengths of light. It’s designed to ignore city light pollution while enhancing the wavelengths of Ha and OIII. Although this 48mm filter worked brilliantly with the Mono camera on the Cone Nebula, I need to test this filter with my DSLR. 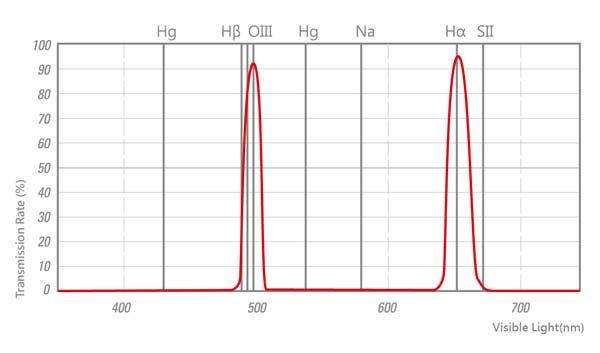 Plans for the Future

The Cone Nebula was my last imaging session with the winter targets, as objects on their way out to the West are not available in my backyard window.

Galaxy season is approaching, and with it, come numerous new targets for deep sky astrophotography. This time around, I’ll shoot with a longer focal length to pull the often tiny subjects into view. The telescope I’ll be using is an iOptron Photron RC6. This will be a brief departure from my refractors as we head into spring. The timing couldn’t be better.

Update: In early 2019 I added a cooled CMOS monochrome astronomy camera to my set up, the Meade DSI IV.

How to Choose a CCD Camera

This is a great resource from Diffraction Limited that provides a better understanding the importance of focal length, light sensitivity and resolution in an astronomy camera. This is the company responsible for the iconic SBIG line up of CCD Cameras.

ZWO offers a wide range of high sensitivity CMOS astronomy cameras.  To date, I have enjoyed the ASI071MC-Cool (Color) and the ASI294MC-Pro (Color). The ASI 1600MM-C is currently one of the most impressive monochrome astrophotography cameras being used by backyard astrophotographers around the world.