Sirius is the Brightest Star in the Sky 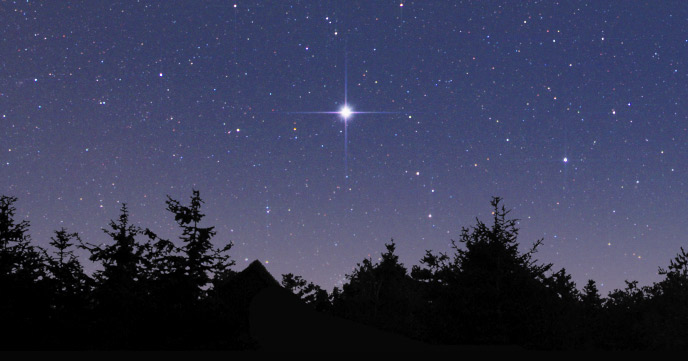 Sirius is known for being the brightest star in the night sky and is nearly twice as bright as the next brightest star, Canopus with a magnitude of -1.46. Sirius is also known as the ‘Dog star’ because it is part of the constellation Canis Major, which is Latin for “the greater dog.”

The name Sirius stems from the Greek word Seirios, meaning ‘scorching’ or ‘glowing’. Typically, the only objects that outshine Sirius in our night sky are the sun, moon, Venus, Jupiter, Mars, and sometimes Mercury.

Sirius’ brightness can be attributed to its luminosity and proximity at a distance of 8.6 light-years. There are few stars that are closer to Earth, but none of them can match Sirius’ magnitude.

Based on calculations from the European Space Agency’s Hipparcos satellite, Sirius will continue to increase in brightness over the next 60,000 years, as Sirius gradually moves closer. Eventually, the distance between Earth and Sirius will increase. Sirus will become fainter but will remain the brightest star in the sky for thousands of years. 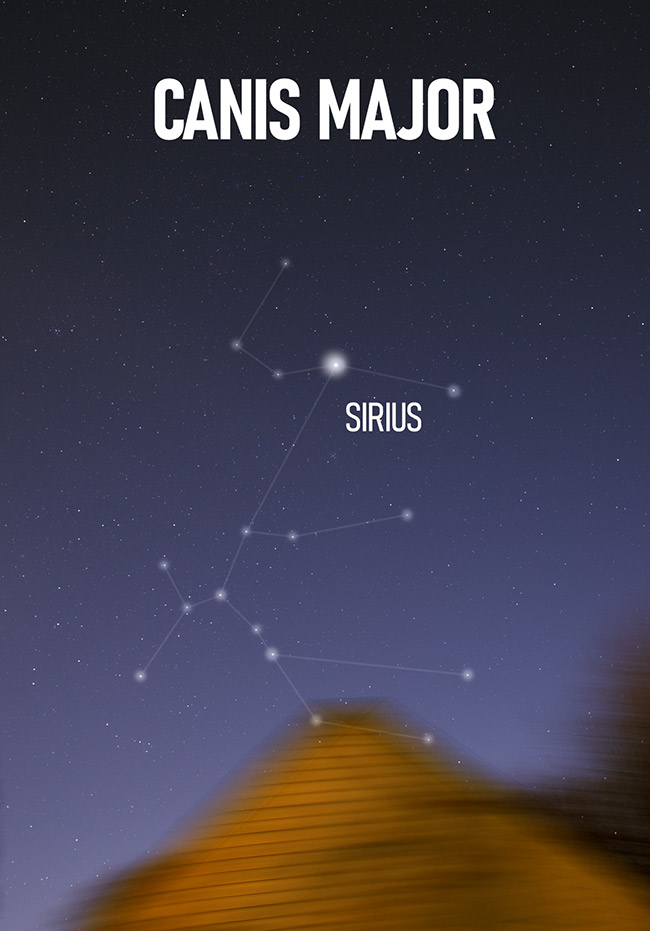 Where is Sirius located?

Sirius is in the constellation Canis Major, a southern constellation bordering on Monoceros, Lepus, Columba, and Puppis. From mid-northern latitudes, Canis Major sits low in the sky and can be difficult to observe in its entirety.

This constellation includes many popular deep-sky objects including:

Sirius also forms the Winter Hexagon (or Winter Circle) asterism, which appears prominently in the northern sky between December and March and is also part of the Winter Triangle.

Where to look for Sirius?

Any easy way to find Sirius in winter skies is to use the belt of Orion as a downward pointer following the three stars in Orion’s belt to the left. 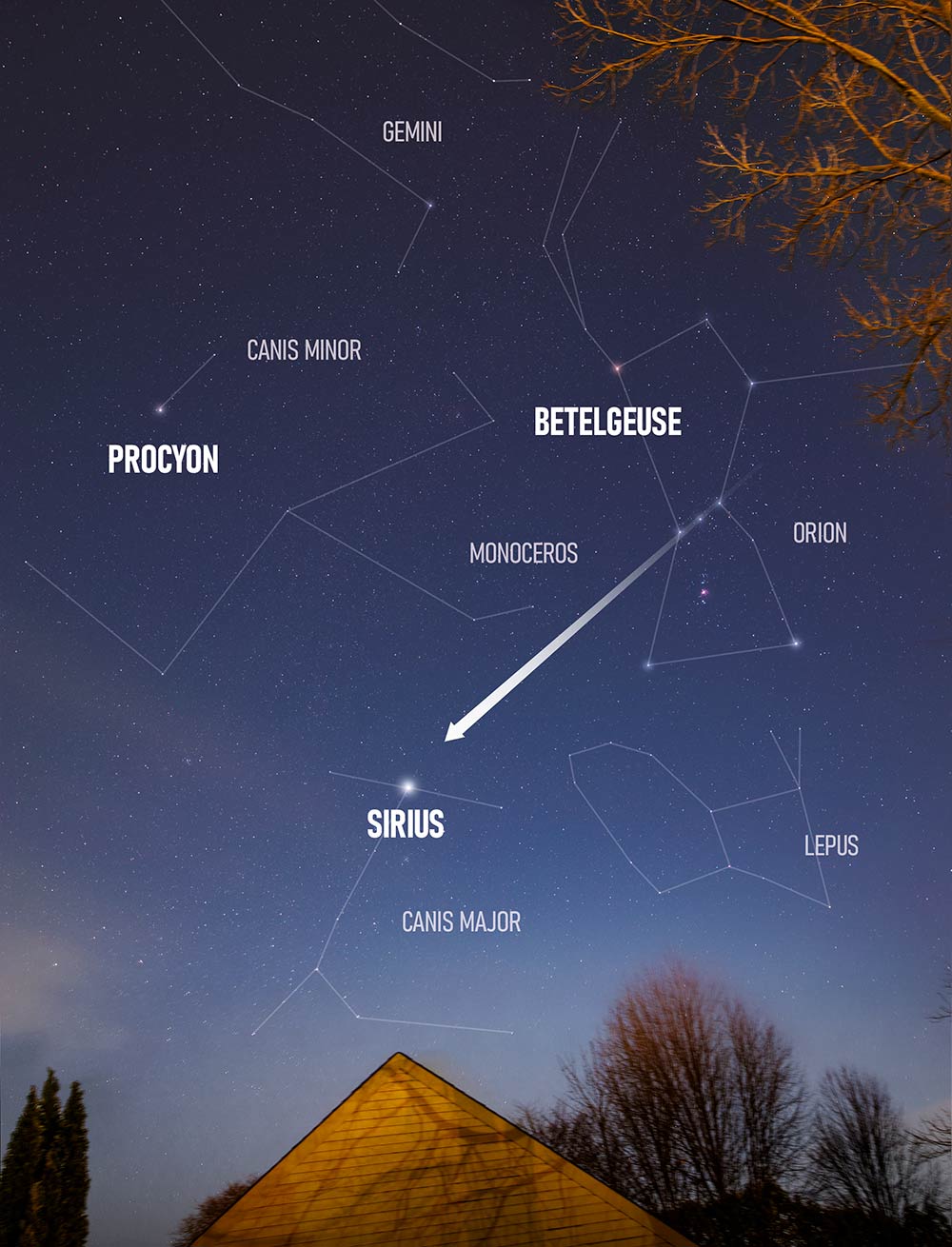 What type of star is Sirius?

Sirius is known as a binary star system. Although visually it looks like one star, Sirius actually consists of two stars that are very close together, known as Sirius A and Sirius B. 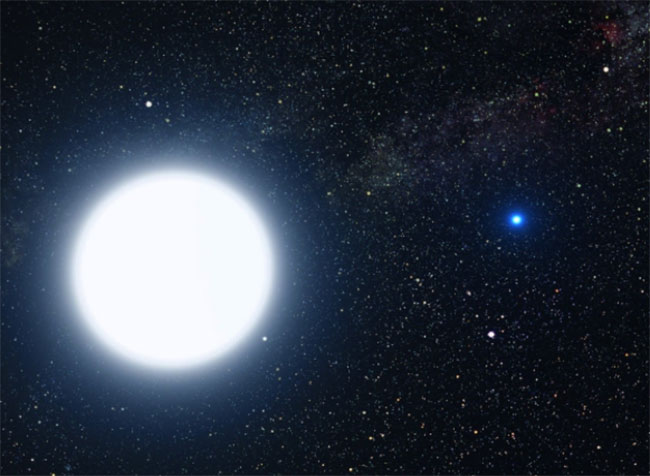 An artist’s impression showing how the binary star system of Sirius A (left) and its blue companion, Sirius B (right). NASA, ESA and G. Bacon (STScI)

Sirius (or Sirius A) is a main-sequence star of spectral type early A. Sirius B is one of the largest known white dwarf stars and is 10,000 times dimmer than Sirius. It’s so dim that astronomers couldn’t estimate its mass until 2005 by using data from the Hubble Space Telescope.

According to NASA, Sirius’ mass is two times greater than the Earth’s sun and if placed next to the sun would outshine it by more than 20 times.

Why does Sirius flicker?

All stars can appear to be twinkling or flicker as they shine through the Earth’s atmosphere with varying density, turbulent air, and particles.

Sirius appears to twinkle/flicker more than other stars as it’s brightness exaggerates these atmospheric effects. For those in the northern hemisphere, Sirius is lower in the sky where there is a thicker atmosphere.

Related Article: Why Do Stars Twinkle but planets don’t? (EarthSky)

Throughout history, there have been many mythological references to Sirius.

In Greek mythology, Canis Major has been known to represent the bigger dog following Orion and is often depicted pursuing a hare, represented by the constellation Lepus shown below. 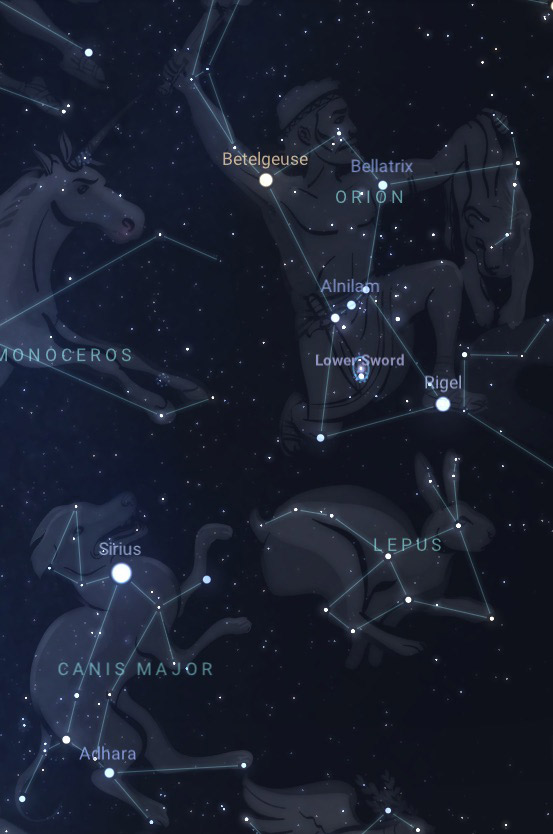 Sirius is located in Canis Major, a dog next to Orion. Stellarium Web Online Star Map

The Ancient Greeks also believed Sirius was partly responsible for the extreme heat in mid-summer due to its scorching nature. This coined the expression ‘dog days’.

The Ancient Egyptians based their calendar on when Sirius was first visible in the eastern sky, shortly before sunrise, signifying floodwaters that would bring new soil and life. Because of this, they referred to Sirius as the ‘Nile Star’.

The Best Astronomy and Stargazing Apps for Your Mobile Phone