Thor’s Helmet is an emission nebula with an ionized HII region in the constellation Canis Major. The name of this nebula stems from its striking resemblance to the helmet of the famed Norse God of thunder and lightning.

Thor’s Helmet is composed of cosmic dust and gas, which is revealed to have a blue-green appearance through astrophotography. NGC 2359 spans roughly 30 light-years across and appears as an interstellar bubble that has been inflated by a central Wolf-Rayet star. 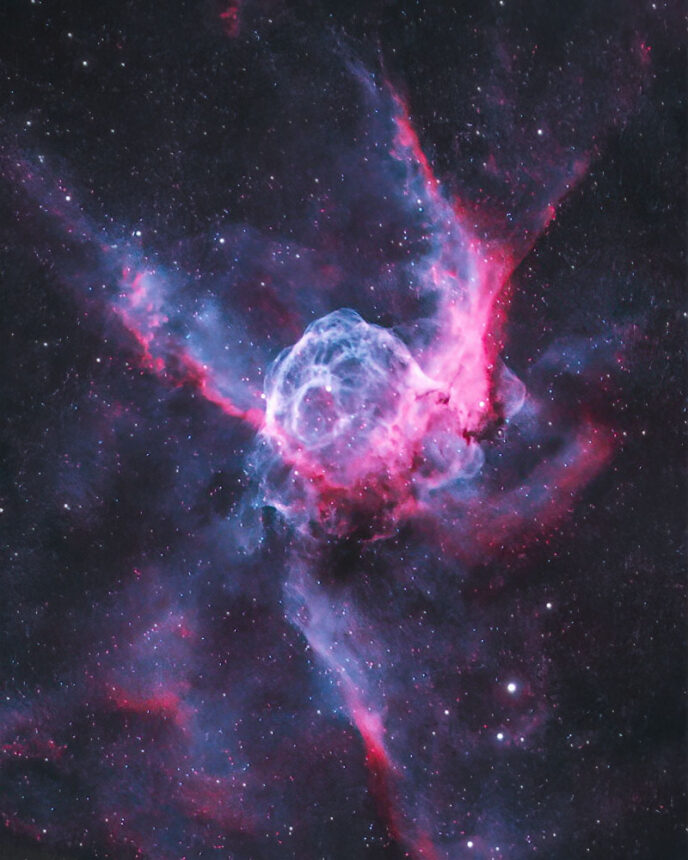 Thor’s Helmet lies about 15,000 light-years away from Earth. Through astrophotography, we can take a closer look at Thor’s Helmet by collecting long exposure images that uncover the bright emission gases in visible light.

The photo shown above was captured using a Starlight Xpress CCD camera, and a Sky-Watcher Esprit 150 telescope. The image was collected through 6nm Astronomik narrowband filters (Ha and OIII).

The size of this nebula is rather small (dimensions 8′ x 8′) which means it is better suited for telescopes with a focal length of 1000mm or more.

The image below was captured using a color camera and Celestron 8″ RASA F/2 telescope. You can click on the photo to see a larger version of the image. 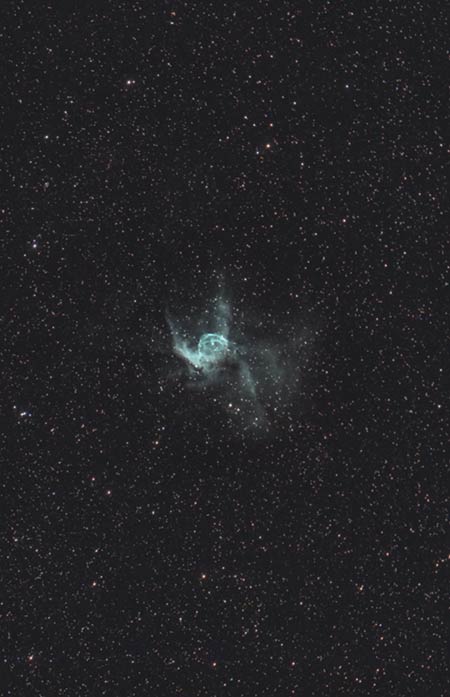 To find Thor’s Helmet, point your telescope about 8 degrees northeast of the brightest star in the sky, Sirius. Through the eyepiece of a modest telescope (8″ Dobsonian), this nebula will appear as a fuzzy glowing patch of gas, and may even reveal some of the arcs extending from the central region.

As with all deep-sky astrophotography targets, selecting a telescope or lens with the right focal length for your project is important. I have learned this lesson the hard way over the years, and the image below is the perfect example.

Thor’s Helmet can be truly appreciated when captured using longer focal lengths. The object is just too small in my wide-field image captured at 400mm.

Narrowband imaging is a useful technique to apply when capturing the intricate details of NGC 2359. It helps reduce the size of the stars in the image and isolates the most important gases present in the nebula. 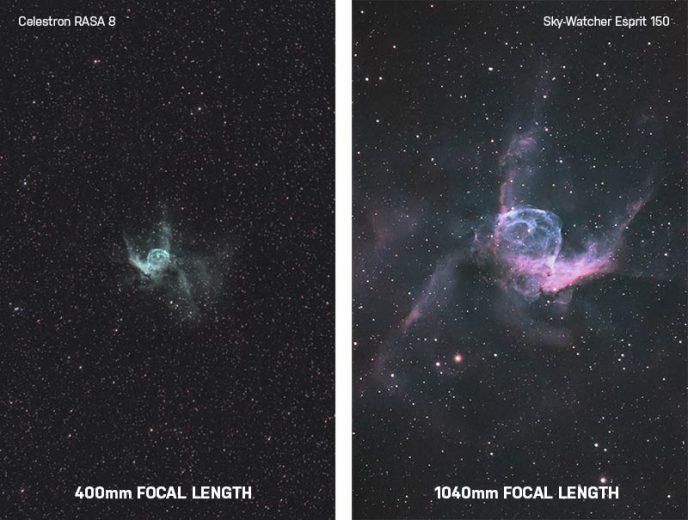 Each of the photos shown above was created by stacking several long exposure images together to enhance the quality of the signal (light) and reduce noise. The image on the left was captured using a one-shot-color dedicated astronomy camera, and the other, a monochrome CCD.

For the image on the left, each exposure was 60-seconds in length, which eventually became over 2 hours of total exposure time after integration. (138 x 1-minute exposures = 2 hours, 18 minutes).

A 1-minute exposure of a deep sky target is relatively short in the world of astrophotography. However, this was more than enough time to pull out the intense details of Thor’s Helmet thanks to the fast F/2 focal ratio of the imaging telescope.

In the end, the imaging configuration did a great job of capturing the vastness of space surrounding Thor’s Helmet, but the deep-sky object is just too small (in my opinion). 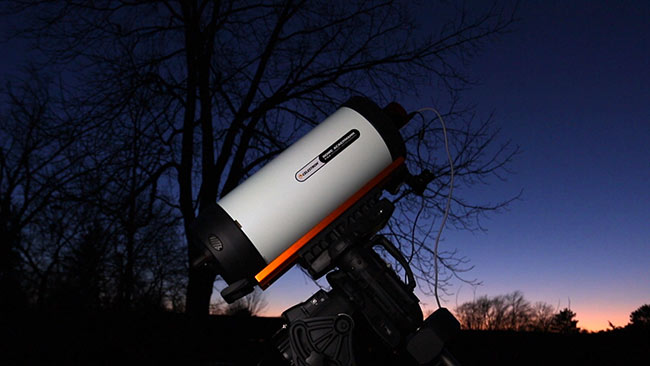 The telescope used for my wide-field photo (Celestron 8″ RASA F/2).

The image on the right (see a larger version on Flickr) was created using images shot through narrowband Ha and OIII filters. The image scale of this system was much better suited for the size of this nebula.

The individual exposures were 6-minutes long each, and dark frames were applied to calibrate the image in the pre-processing stages. 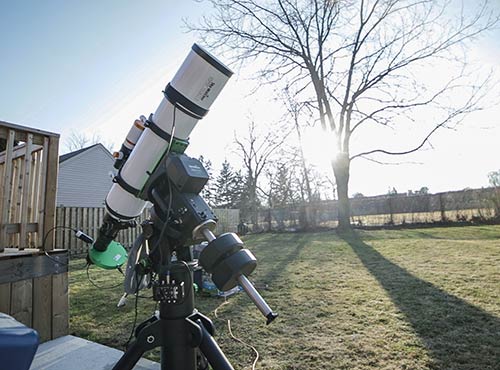 The telescope used for my up-close photo (Sky-Watcher Esprit 150).

Tips for a Better Image

There are several factors that have contributed to my successful image of NGC 2359. The basic principals of deep-sky astrophotography include accurate polar alignment, precise focus, and collecting enough images to create a healthy signal-to-noise ratio.

The composition of this nebula lends itself well to narrowband imaging, particularly using Ha and OIII filters. I created a video tutorial on this subject on my YouTube Channel for those interested.

A bi-color image was created (HOO), which utilizes the data collected in Ha and OIII to create a synthetic green channel.

Narrowband filters block almost all of the artificial light present in my Bortle Class 6/7 backyard, yet lets the delicate light from the emission gases through. This is a fantastic option for those of you shooting astrophotos under light-polluted skies.

I ran my wide-field image of Thor’s Helmet through the free image annotation service from Astrometry.net. I highly recommend uploading your astrophotography images to this website to see exactly which deep sky objects you have captured in your image. 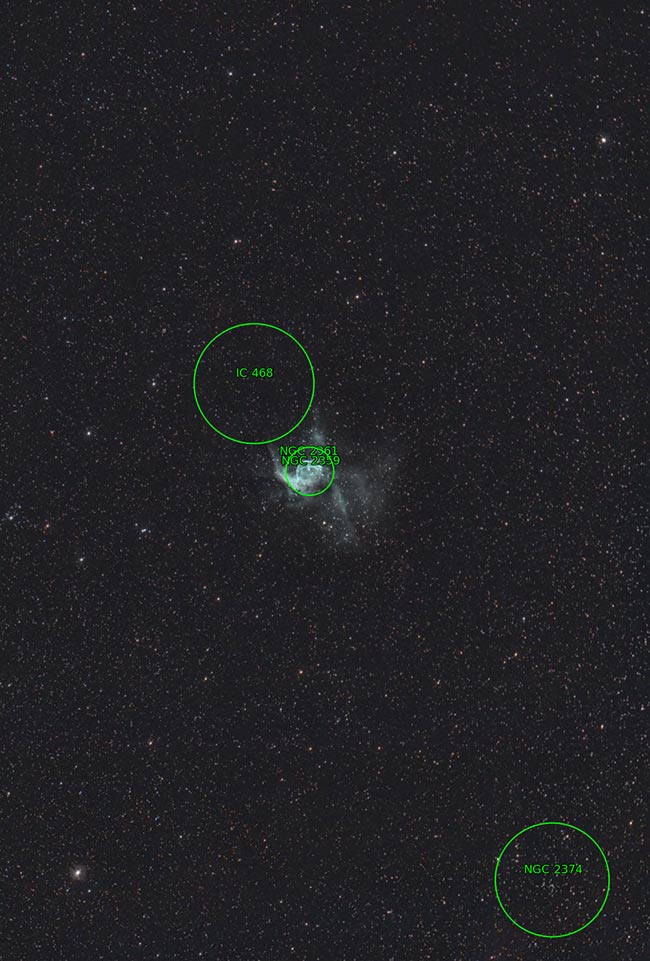 As you can see in this wide field annotated image, there are not a lot of surrounding deep sky objects in the immediate area of NGC 2359. However, you can see that Thor’s Helmet is divided into a few parts (NGC 2359 and NGC 2361), and includes a nearby open star cluster (NGC 2374).

It is also interesting to see the label for IC 468, as I can not tell what separates this region from the outer nebulae of Thor’s Helmet overall.

From the northern hemisphere, one of the best times to photograph this target is in late winter. From my latitude at 43 degrees north in Ontario, Canada, Thor’s Helmet reaches an altitude of about 33 degrees in the southern sky by late February.

The star map below shows the location of the Thor’s Helmet Nebula and its proximity to the star Sirius. 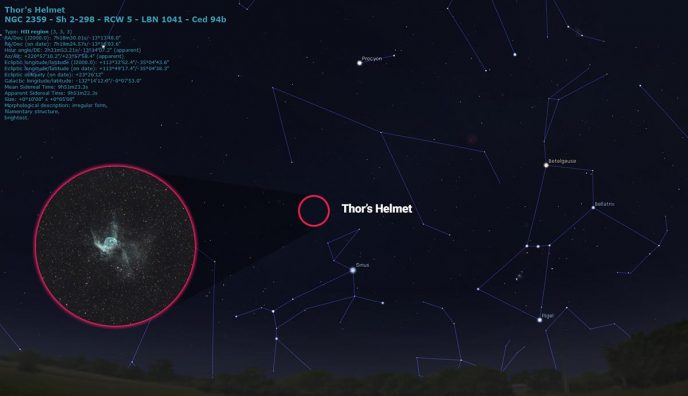 The location of the Thor’s Helmet Nebula in the constellation Canis Major.

The following video gives you an incredible view at Thor’s Helmet Nebula by the European Southern Observatory (ESO).