The Omega Nebula (Messier 17) is one of several brilliant deep sky astrophotography targets located in the constellation Sagittarius. M17 (Also called the Swan Nebula) is an H II region (emission nebula) that lies between 5000-6000 light-years from Earth.

The Omega Nebula is a star factory sculpted by stellar winds and radiation. The cavernous appearance of this emission nebula was carved out by energetic light from hot, massive stars.

Because of M17’s high surface brightness of the Omega Nebula (apparent magnitude of +6), it is observable through a small telescope. From my light-polluted backyard in the city, the Omega Nebula appears as a distinct grey smudge through the 22mm eyepiece of my Dobsonian telescope.

Capturing this object using my DSLR or dedicated astronomy camera reveals the rest of the story through long exposure photography.

My latest image of the Omega Nebula uses the OPT Triad Ultra quad-band narrowband filter to help isolate the prominent gases that are emitted in the visible spectrum. 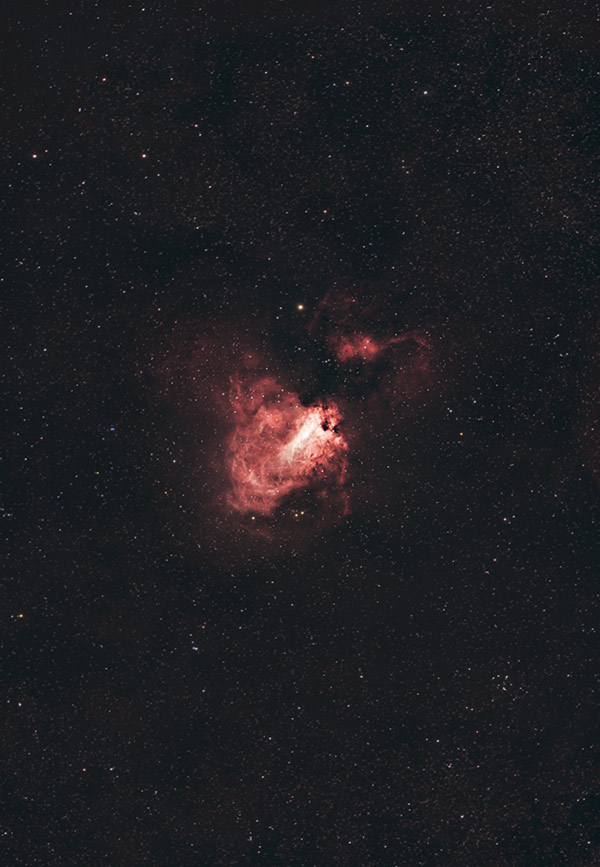 The photo above uses data captured using a Sky-Watcher Esprit 100 ED refractor telescope. This telescope excels at capturing images with sharp, pin-point stars over a wide (550mm) field of view. Using a telescope with a wide focal length, amateur astrophotographers often choose to include the nearby Eagle Nebula in their photo. 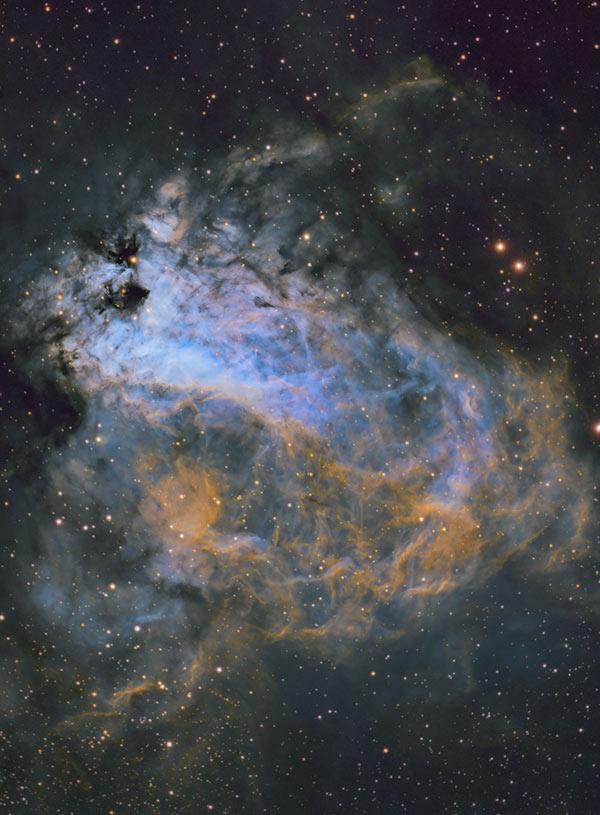 Capturing the Omega Nebula with a Camera and Telescope

Below, you’ll see the difference between images of the Omega Nebula using a stock DSLR camera vs. a modified camera that has had the default internal IR filter removed. If you are looking to modify your DSLR for astrophotography, I recommend using Hap Griffin’s modification service.

It is not necessary to modify your camera to record an amazing image of the Omega Nebula, but it will reveal even more of its structure.

My final image of M17 includes 30 x 3-minute subs using ISO 1600. The imaging session was controlled using Astro Photography Tool. The complete photography details for this image including the list of equipment used are listed below.

Also known as the Swan Nebula

This nebula includes an H II region where star formation has recently taken place.  The Omega Nebula rises high enough from my latitude to start imaging in early April if you’re up late enough.  It’s always exciting to see M17 for the first time in the year, as it marks the beginning of Milky Way season for stargazers.

For those of you that use your telescope in a city backyard, you’ll be happy to know that M17 is one of the highest objects in Sagittarius. In June and July, it rises high enough in the sky to clear the tall trees and neighboring houses from my backyard. 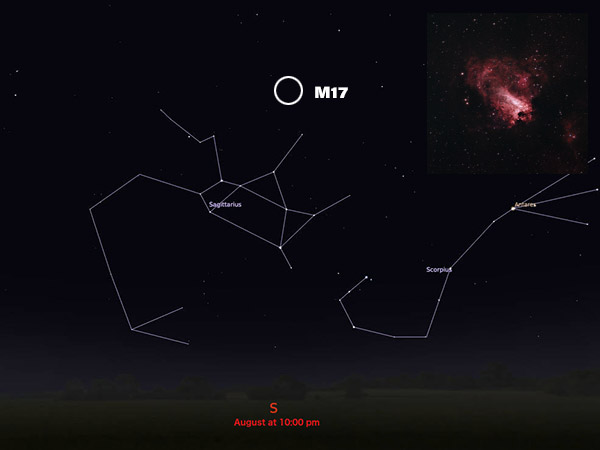 In late May of 2017, I set up my refractor telescope on the far side of my backyard for a low view of the South Eastern horizon.  The Omega Nebula rises higher than some of my other favorite targets in Sagittarius such as the Lagoon Nebula.

The night of this astrophotography session was clear yet hazy.  I think that the transparency of the air affected the quality of my stars in the image.  Regardless, I am delighted to photograph such an incredible nebula from the comfort of my backyard. 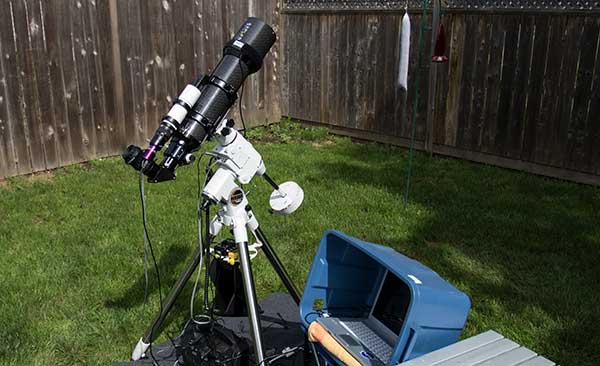 My Canon 600D DSLR has been modified for astrophotography, known as a “full-spectrum modification”.  This process opens the CMOS sensor of the Canon T3i to all wavelengths of light, including the bright reds found in emission nebulae such as the Omega Nebula. 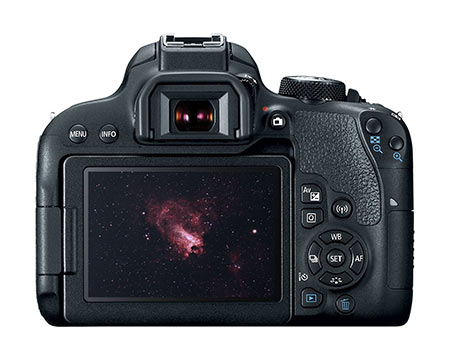 When a modified DSLR is used with a refractor telescope or camera lens, it is essential to use a UV camera filter or an IR filter.  The SkyTech CLS-CCD filter was used on my Canon DSLR for my image of M17.

This filter also improves the contrast between the astronomical object and the background sky.  Filters such as the CLS-CCD are a great option for backyard astrophotographers looking to block out light pollution, without sacrificing any of the “good” light.

Article: Why you need a UV/IR camera filter when imaging through a refractor telescope

Bottom Line: An IR filter blocks wavelengths of infrared light that do not focus at the same point as visible light.

View through a 150mm Refractor

The version of M17 below is the view through my 150mm refractor telescope (Sky-Watcher Esprit 150 APO).  This image was shot at a focal length of 1050mm and should give you a good indication of the scale you can expect with similar equipment.

The photo was created by capturing images using narrowband filters. This image is considered to be in the HOO palette (Ha=Red, OIII=Green, OIII=Blue).

The camera was a Starlight Xpress Trius 694 Mono CCD, and Astronomik 6nm Ha and OIII filters were used to isolate specific wavelengths of reflected light. 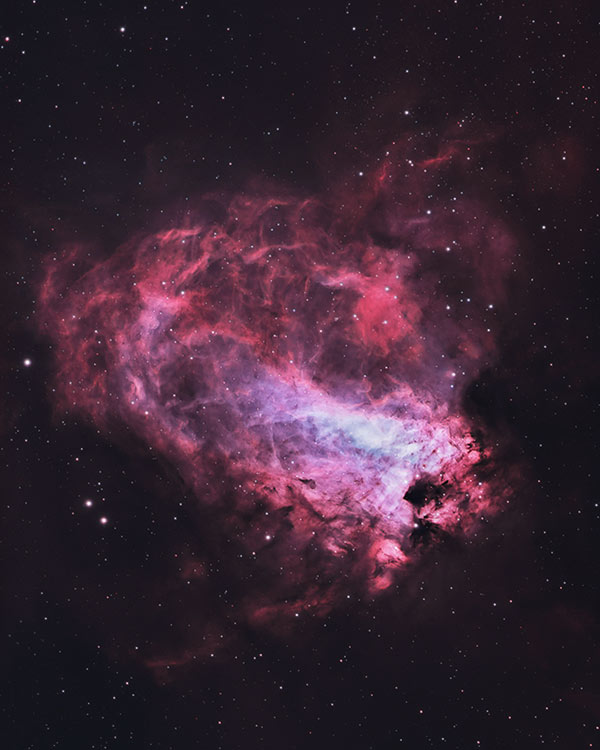 The stars got a little “chewed” in the processing, something I have been trying to be aware of lately.  I have a habit of focusing on the detail of the nebula while turning a blind eye to the surrounding space and stars.

To be honest, 90 minutes is not nearly enough to really start processing a deep sky image.  Add the poor imaging conditions, and a hot night, and you’ve got a challenging task of stretching and smoothing your data in Photoshop. 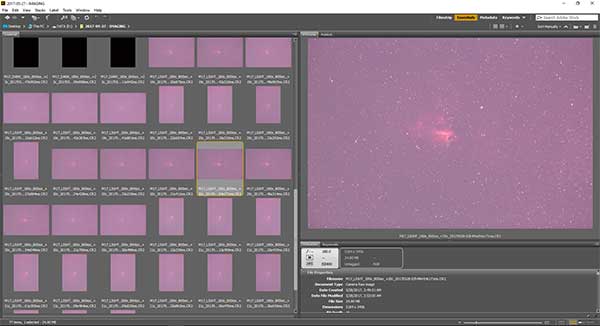 In May 2019, I photographed the Omega Nebula using the Celestron RASA 8 F/2 and a one-shot-color camera. The image below uses 36 x 3-minute exposures from my light-polluted backyard in the city (Bortle Scale Class 6). I plan to add narrowband (hydrogen-alpha) details to this image in the near future.

Capturing accurate star color from the city can be a challenge. For this image, I used an Optolong L-Pro filter as it is very mild compared to some of the stronger filters I use for astrophotography.