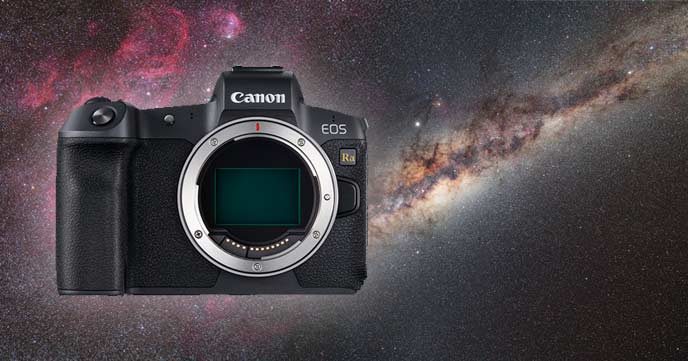 On November 5, 2019, the Canon EOS Ra was announced and is now available for pre-order at various retailers including B&H. This is a 30.3 MP full-frame mirrorless camera designed specifically for astrophotography.

For a niche hobby like astrophotography, the Canon EOS Ra has sure attracted a lot of attention from the photography world. I pleaded my case to my contact at Canon for an early unit to review but was not successful in my efforts (and I’m not even bitter about it).

Update: Canon USA reached out to me in December asking if I would try out the Canon EOS Ra and let them know what I think of it. Here is a short video showing one of my first experiences with this camera and an RF-mount lens:

Thankfully, some new and exciting example images have already surfaced from those that were granted early access to this camera body, and from Canon themselves. 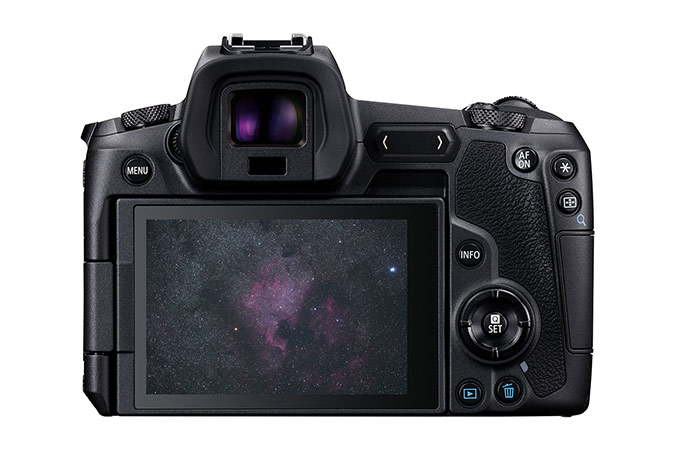 In this article, I’ve put together all of the information I can find about the EOS Ra, and included the limited number of example images shared thus far. To see the full slideshow of images shared by Canon with this camera, see this article by Todd Vorenkamp of B&H.

The CMOS sensor found inside of the Canon EOS Ra is 4x more sensitive to the hydrogen-alpha wavelength, which is extremely useful for astrophotography. As many of you know, some of the absolute best deep-sky nebula in the night emit a strong red signal in the 656 nm wavelength.

Historically, amateur astrophotographers that wanted to collect the powerful deep reds found in many emission nebulae with their generic DSLR cameras had to remove the stock internal IR cut filter. This is called modifying your camera for astrophotography and is offered professional from several vendors.

Canon began offering “pre-modified” DSLR cameras from the factory for astrophotography use in 2005 with the revolutionary EOS 20Da. The Canon EOS 60Da followed in 2012, and now, the mirrorless EOS Ra in 2019.

This camera is aimed at landscape astrophotography enthusiasts (such as wide-angle Milky Way photography), and deep-sky imagers using an equatorial telescope mount. The mirrorless design of the EOS Ra is a massive change from Canon’s last astrophotography camera. Not only is it a different style of camera mechanically, but it also accepts Canon RF Lenses.

The 30.3 MP full-frame CMOS sensor found inside of the RA is beneficial for amateur astrophotographers that use wide-angle lenses. If you own Canon EF mount lenses as I do, you’ll need to buy the EF-mount adapter to attach your lens.

I must admit, it will be hard to justify purchasing the “a” version of the Canon EOS R for many multi-discipline photographers that take photos in the daytime as well as night. This camera has some impressive specs for photography and videography including shooting 4K at 30p with Canon Log.

I have always shot my videos with Canon DSLR cameras (most recently the Canon EOS 6D Mark II), and am a little confused as to how I would fully utilize the video features of the EOS Ra. As Canon has stated numerous times about their “a-series” cameras, they are not suitable for daytime photography. In my tests with the 60Da, the colors are slightly off and create unappealing daytime images without serious adjustments in post. 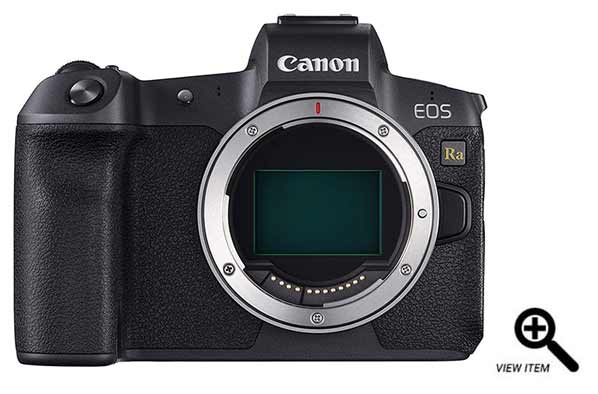 If you are new to Canon’s astrophotography camera line-up, you may be wondering what the difference between the EOS R and Ra is.

The reason this version of the camera has an “a” in the name is simply due to the specialized infrared-cutting filter that sits in front of the CMOS sensor. Canon lists that this change allows a transmission in the hydrogen-alpha (Hα) wavelength that is approximately 4 times greater than a regular Canon EOS R camera.

The example images from Canon USA illustrate this capability on the North America Nebula. I found it very interesting to note that Canon’s engineers report an even greater sensitivity to Hα in the EOS Ra than previously achieved in the 20Da and 60Da camera bodies.

Essentially, the Canon EOS Ra is a modified version of the EOS R for amateur astrophotographers that want to collect more signal in the important Hα emission line. For the same reason I invested in the Canon 60Da, I like the idea of Canon handling the astro-modification and not voiding the warranty with a third-party service.

The infrared-cutting filter (positioned immediately in front of the CMOS imaging sensor) is modified to permit approximately 4x as much transmission of hydrogen-alpha rays at the 656nm wavelength, vs. standard EOS R cameras. This modification allows much higher transmission of deep red infrared rays emitted by nebulae, without requiring any other specialized optics or accessories.

If you’ve experienced what it is like to focus a camera at night, you’ll know how important the live-view zoom feature is. The best way to focus your camera lens or telescope with a DSLR or mirrorless camera attached is to zoom-in on a bright star and magnify it. Traditionally, this would be at a magnification of 10X, but Canon has upped the ante.

The Ra features Canon’s first-ever 30x magnification, and it can be done on both the LCD screen and viewfinder. Because the EOS Ra is a mirrorless camera system, the electronic eye-level viewfinder is able to provide the magnification feature. As a DSLR shooter, this would feel very strange to me and I doubt it would be a useful as the much larger LCD screen.

Speaking of the LCD screen on the back of the camera, it’s a vari-angle design. This is extremely useful for astrophotographers, as we regularly point the camera in all sorts of awkward angles.

Any amateur astrophotographer with experience using DSLR cameras will tell you that the amount of noise in your image will increase as you bump up the ISO. This creates a challenging trade-off, as we often want to collect as much light in a single exposure as possible.

However, modern cameras have got a lot better and keeping noise at bay using higher ISO settings, and the Canon EOS Ra is no exception.

In this video from B&H, the host states:

“high ISO noise is extremely well-controlled, particularly at the high ISO’s that are common in astrophotography”

It’s impossible to tell exactly how well “controlled” the noise is from the example photo shared (below). The same vague statement was said about the Canon 60Da, and I found it to be true when shooting at an aggressive ISO 6400 on warm nights in the summer. 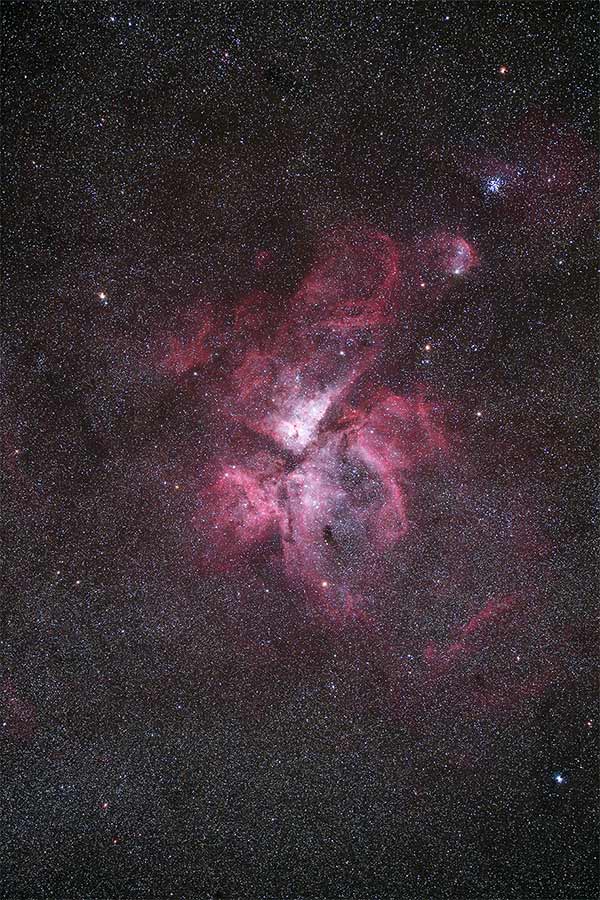 The following video released by B&H and Canon USA covers many of the core specifications of the Ra, and what separates it from a regular mirrorless camera. I appreciate the improved battery performance of this camera over the previous models. Canon states that the battery will last for 7 hours of bulb exposure time, although I expect this to time to diminish on a cold night.

The EOS Ra is the third installment (not the 4th, as I have seen a non-existent “6Da” reported) in Canon’s line of dedicated cameras for astrophotography.

Just like in the daytime photography world, the number of lenses you own in a particular brand is a big deciding factor when upgrading your camera body.

The Canon EOS Ra is clearly a big step up from the last astrophotography camera released, the 60Da. More megapixels, bigger pixel size, better ISO performance, more sensitive to Hα, a better viewfinder, a mirrorless body – so what’s not to love?

In my eyes, there are two reasons why an amateur astrophotographer will look elsewhere for their next camera. The first one is that there are many practical dedicated (CMOS) astronomy cameras available now, ones that offer cooling and sensitive monochrome sensors.

The other is that modifying an older Canon DSLR is still a very practical way to collect impressive astrophotography images for a fraction of the price. 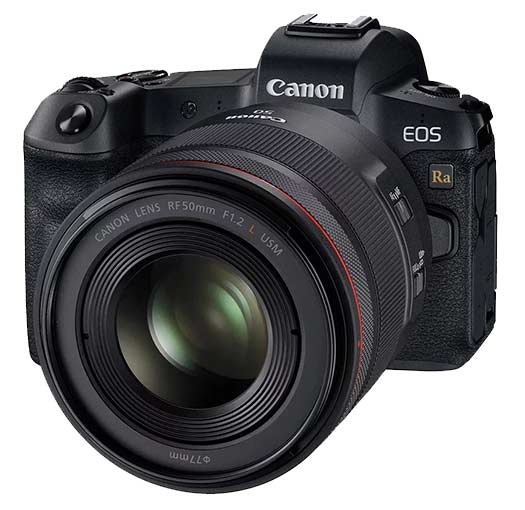 However, I think there are many people that enjoy the familiarity of a DSLR/mirrorless camera system. If you travel a lot for astrophotography, a mirrorless camera and lens are much more practical than a dedicated astronomy camera and software to run it.

Another great point that has been brought to my attention about this camera is the file types created and their compatibility with stacking software.

The Canon mirrorless cameras create CR3 file format images, which are currently not supported in software such as DeepSkyStacker (at the time of writing). This might be a great reason to hold off on the EOS Ra until these applications catch up with the technology.

Another big change is the opportunity to use filters between the camera body and lens via the Canon Drop-In Filter Mount Adapter (EF-EOS R). Daytime photographers use this attractive feature for drop-in variable ND filters, but perhaps the astronomy companies will begin to manufacturer astrophotography filters for this configuration.

I think this would big a much better option over the clip-in style filters currently offered for full-frame DSLR’s. 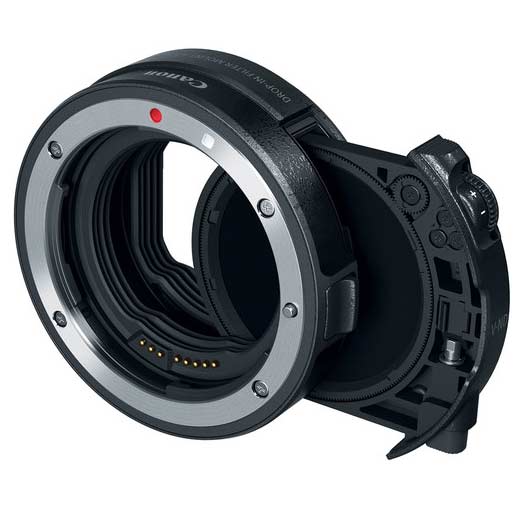 The big question is, will I be ordering the Canon EOS Ra for astrophotography in the backyard? Probably.

At the time of writing, the price tag for the body only is $2,499 USD, and it will be released on December 19, 2019. I order my photographer gear on Amazon almost exclusively, and the package offered by Canon includes a battery charger, strap, and a few extras.

I am interested in testing the camera from both a hobbyist perspective and to provide useful information to amateur astrophotographers looking to purchase this camera. The interesting thing is, if I do purchase the Ra, it will be my first mirrorless camera.

As an ambassador of the hobby, I feel obligated to share my experiences with the latest official astrophotography camera from my favorite brand, and yes, you can go ahead and label me a Canon fanboy.

Here is an image I managed to capture in just 10 minutes using the EOS Ra and 85mm F/1.2 lens.

The Heart and Soul Nebula in Cassiopeia using the Canon EOS Ra and 85mm F/1.2 Lens.