The Pacman Nebula (NGC 281) is a cosmic cloud of space gas located in the constellation Cassiopeia. This nebula gets its name from the classic video game character it resembles. Many people think that this nebula resembles a heart when viewed at the right angle.

NGC 281 is a rather diffuse red-glowing emission nebula. It includes a small, yet noticeable open star cluster (IC 1590) and dynamic dust lanes. The prominent lane of dark dust cutting into this glowing nebula creates the “mouth” of this nebulas shape. 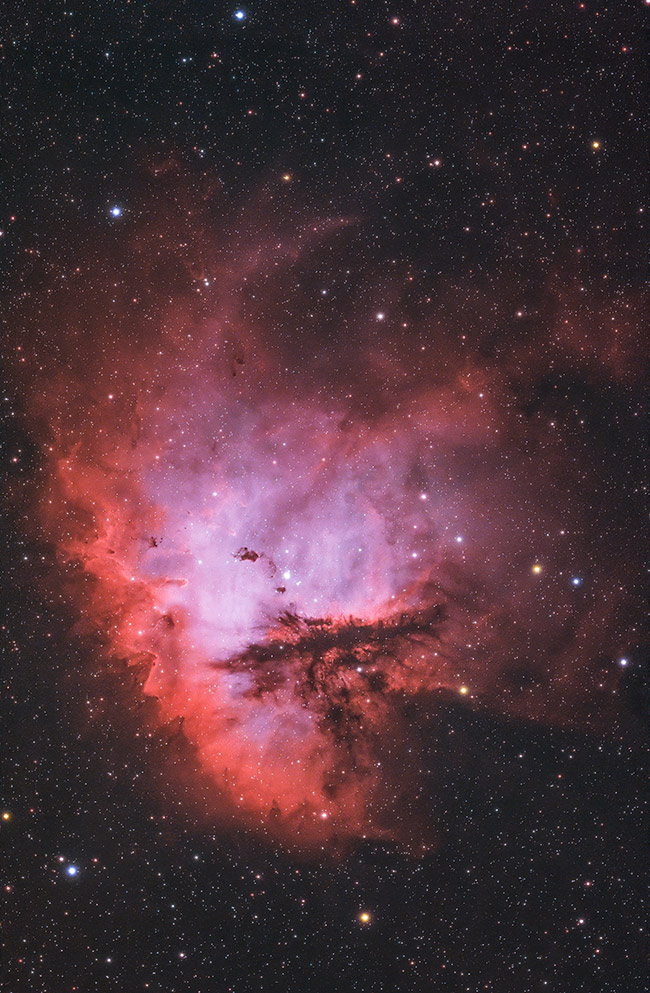 The Pacman Nebula contains Bok globules, which are small and isolated dark nebulae containing dense amounts of dust and gas. These collections of cosmic gas and dust are often followed by the formation of new stars.

This deep-space object has been studied and observed by astronomers for over 100 years. The great observational astronomer Edward Emerson Barnard discovered the nebula in 1883. He describes the Pacman Nebula as “a large faint nebula, very diffuse.”

You’ll find NGC 281 in the Northeast corner of Cassiopeia. Locate the bright star, Shedar in the “W” asterism, and travel south to a star slightly dimmer known as Achird. This large faint and very diffuse nebula appears extremely dim visually and makes for a challenging observation. 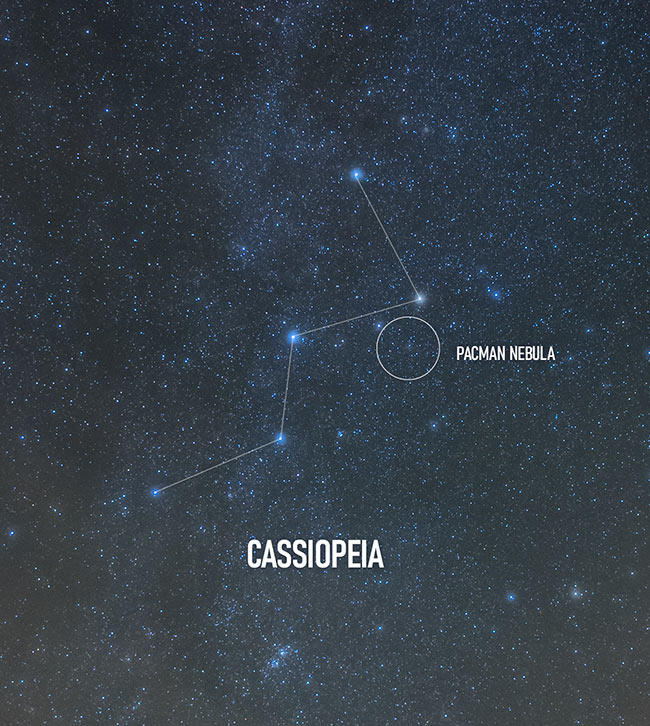 Location of the Pacman Nebula in Cassiopeia.

You can use a stargazing app on your smartphone to help you identify the position of this nebula in the constellation Cassiopeia. Binoculars may make the experience of finding this subject easier and more enjoyable, but don’t expect to see the structure and dynamic colors of the nebula this way.

A telescope with an aperture of at least 8″ (such as a Dobsonian reflector) should be able to pick up the glow of this nebula region from a dark sky location. To truly appreciate the beauty of this emission nebula, you must collect a series of long-exposure (tracked) images with your camera.

In the video below, I explain how I will always trade sleep for a night of astrophotography. What’s one rough morning compared to an incredible deep-sky image of the Pacman Nebula I’ll have for the rest of my life?

In the video, I share a number of astrophotography tips to help you capture successful deep sky images on a consistent basis. One of them is to use an alignment star on your telescope mount that lies close to your intended deep-sky target. This will result in an accurate pointing accuracy of the mount, and a well-centered target.

Also, use that alignment star to focus your telescope as well. Since the field of view that contains your deep-sky object may not contain a star bright enough to use a Bahtinov mask on, the alignment star may be your best chance to complete this step.

Plate solving is another method of improving the pointing accuracy of your telescope mount but requires external software (such as Astro Photography Tool) to run. A 3-star alignment routine can be accomplished on the hand controller of modern equatorial telescope mounts.

Relatively dim and diffuse nebulae such as the Pacman Nebula may be completely invisible in your field of view. The fine details and color of the nebula must be pulled forward during the image processing stage. A telescope mount that can accurately point to your target is essential for photography faint targets.

Over the years, I have photographed the Pacman Nebula many times using various camera equipment and telescopes. My first image of NGC 281 was taken with a DSLR camera and an 80mm refractor telescope (480mm focal length).

My latest attempt (the image at the top of this page) was captured using a large refractor with a focal length of 1050mm. In my experience, the Pacman Nebula is a worthy astrophotography subject for telescopes of all focal lengths. 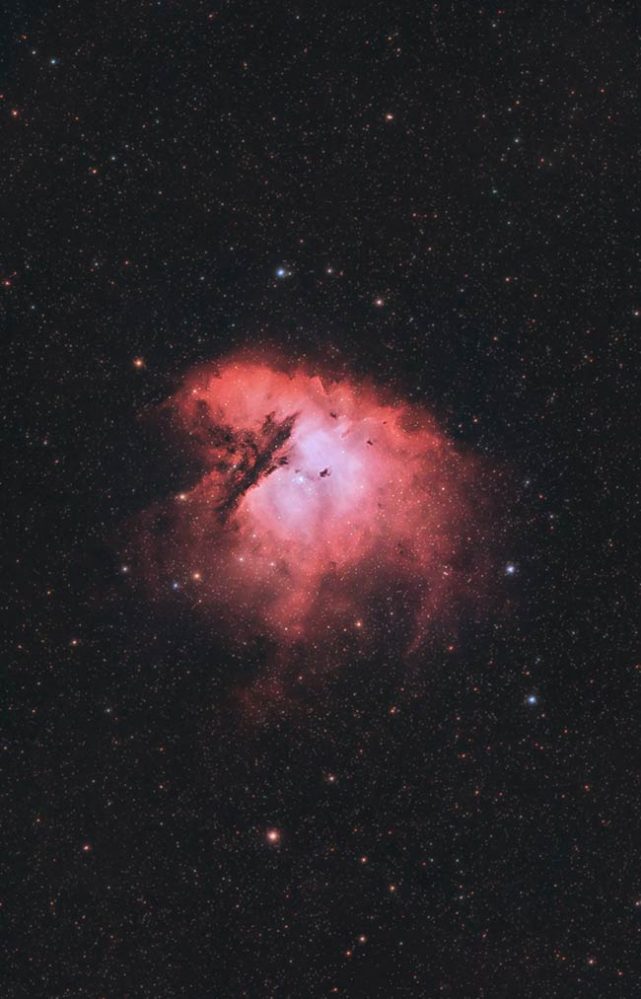 The image above was captured using a cooled CMOS camera (ASI294MC Pro) through a 550mm apochromatic refractor telescope. Over 4 hours of total integrated exposure time was used to produce this image. Stacking multiple light frames together can help improve the signal-to-noise ratio. Learn more. 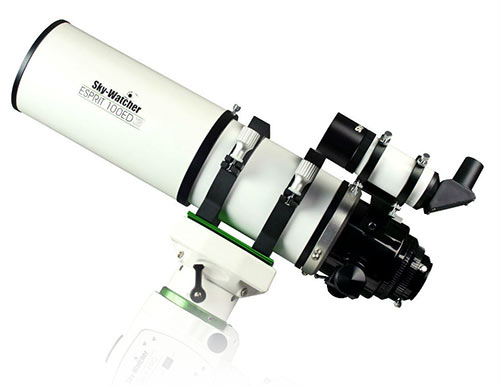 The image scale of the camera and telescope I used for this photo is 1.73. This figure is calculated by dividing the pixel size of my camera (4.63) by the focal length of the telescope (550mm) – and multiplying that number by 206. Generally, to produce a well-sampled image (not pixelated or bloated), you want to aim for an image scale of 1-2.

The version of the Pacman nebula seen below was captured using my Canon 450D DLSR before it was modified. It’s a good representation of what to expect with an unmodified DSLR.

Extensive image processing went into this version of the image, mainly to reduce the size of the stars. A broadband light-pollution filter was used to help separate the nebula from a city sky. 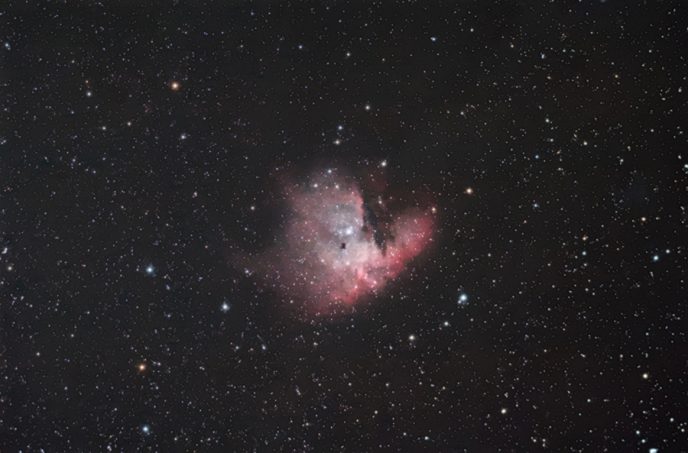 The Pacman nebula is a great candidate for a narrowband Ha filter. This area of the night sky is densely populated with stars, which can make image processing a challenge. The goal is to isolate the light transmitted from the gases in this nebula from a busy sky full of stars.

The most beautiful portraits of NGC 281 are often captured using narrowband filters (see this APOD version in the Hubble Pallete) to separate the different wavelengths of light this nebula emits. An H-Alpha filter should do a great job at taming the sea of stars surrounding the nebula, and improve overall contrast.

PacMan Nebula in the Hubble Palette

In 2021, I finally captured an image of the Pacman Nebula in the SHO palette using narrowband filters. The image you see below was photographed from my backyard observatory over several nights. 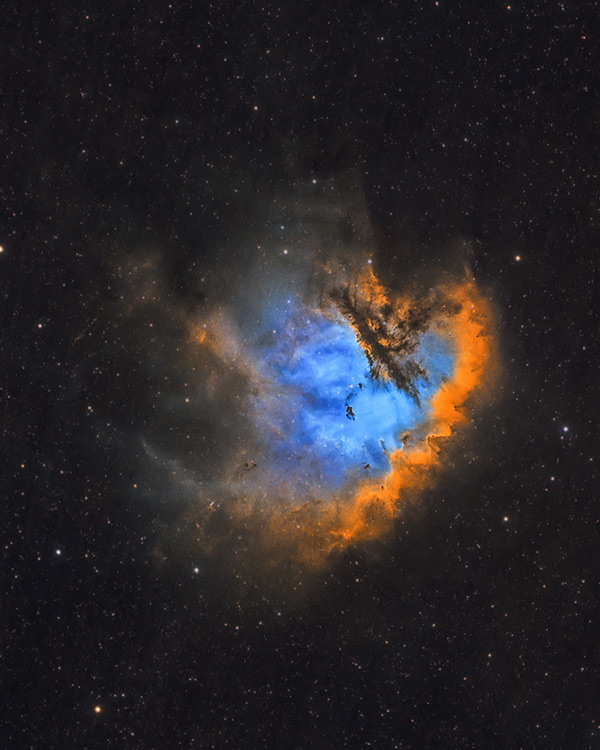