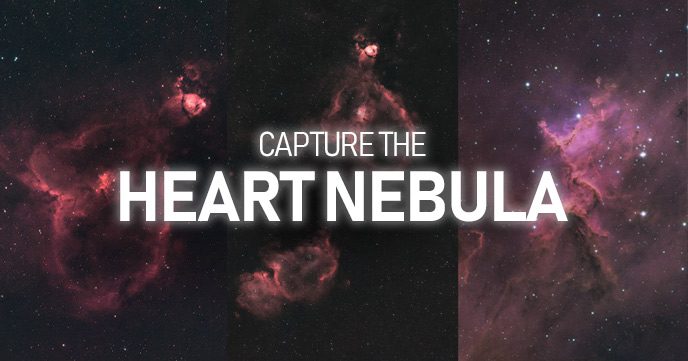 The Heart Nebula (IC 1805) is a large emission nebula in the constellation Cassiopeia. The beauty of this iconic astrophotography target is due to its mix of both bright pink hydrogen gas, and dark dust clouds.

This glowing nebula gets its nickname from the familiar shape it resembles and is located approximately 7,500 light-years from Earth.

This emission nebula shares a resemblance to a human heart via its glowing ionized hydrogen gas and dark dust lanes. Amateur astrophotography enthusiasts such as myself can photograph the Heart Nebula using modest camera and telescope equipment.

In this article, I’ll share my astrophotography results using a variety of different cameras, lenses, and telescopes.

If you would like to see how I process my astrophotography images in Adobe Photoshop, have a look at my premium image processing guide. 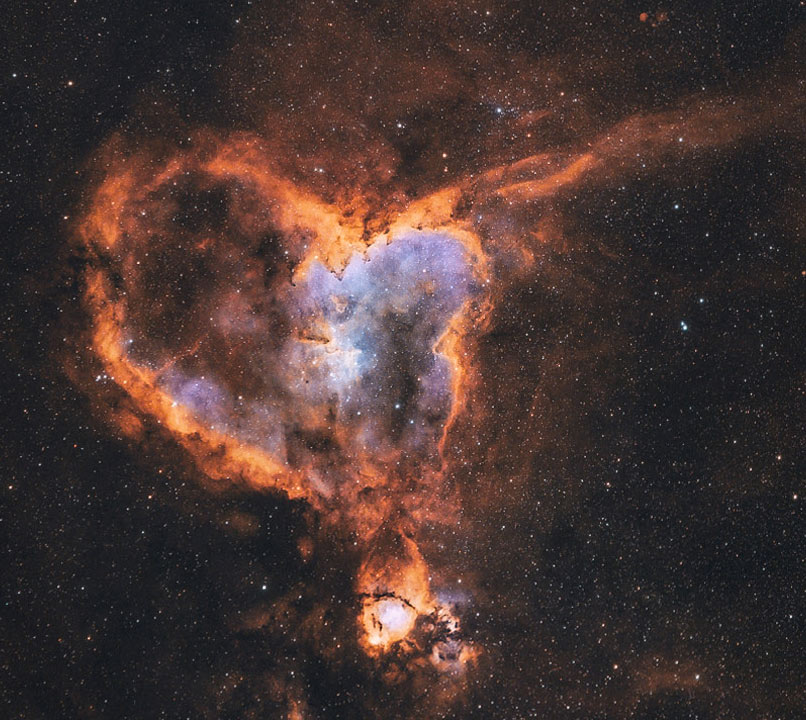 The Heart Nebula in Cassiopeia.

The brightest portion of the nebula is cataloged as NGC 896, which is likely the first part of this nebula you will notice when photographing with a DSLR camera.

This area also contains the Fish Head Nebula (IC 1795) which is paired up against NGC 896. The Heart Nebula contains a large area of gas that radiates from the open cluster (Melotte 15) at its core.

The Heart Nebula is very large and faint. Some portions of the Heart Nebula such as Melotte 15 and the Fish Head Nebula are very bright, while other portions are much dimmer.

In terms of astrophotography, the focal length and magnification of the telescope or lens used will determine how much of IC 1805 you will capture.

Here is my latest photo of Melotte 15 inside of the heart nebula using narrowband filters and a dedicated astronomy camera. 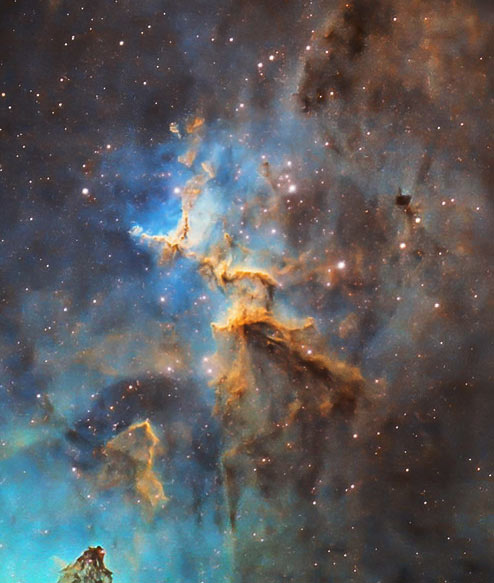 Inside the Heart Nebula (Melotte 15).

The image below illustrates the contrasting views of the Heart Nebula between a 135mm telephoto lens and a 1040mm refractor telescope. 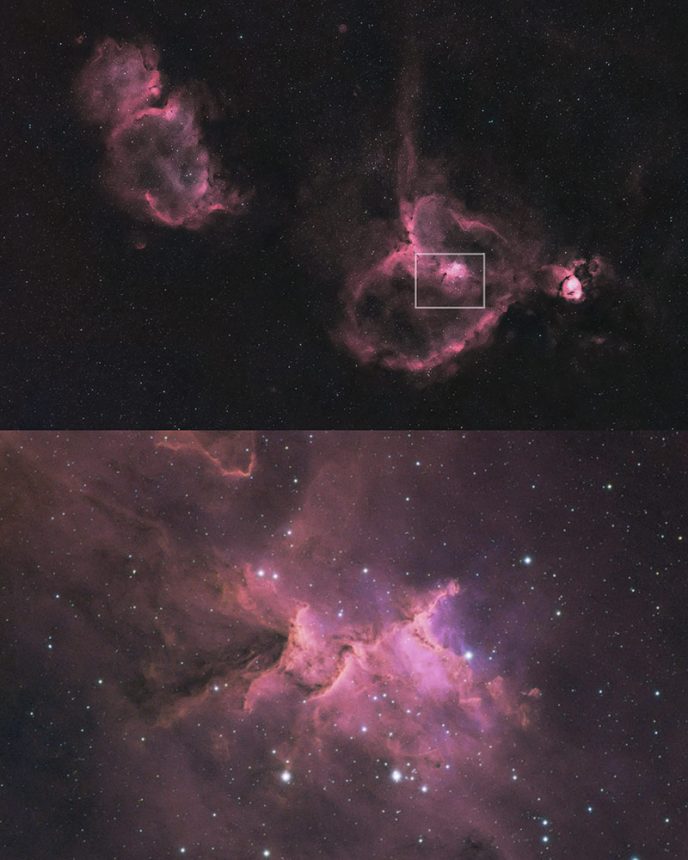 One of the most effective ways to photograph the Heart Nebula is to use a narrowband hydrogen-alpha filter with your camera.

The Heart Nebula emits a strong signal in this wavelength (656nm), and a Hα filter will isolate this light and create contrast between the nebula and the surrounding sky. For the image above, I used Astronomik 12nm, and 6nm filters to collect impactful images of the hydrogen in IC 1805.

Where is the Heart Nebula Located?

It is easy to find the Heart Nebula (and Soul Nebula) by using the constellation Cassiopeia as a reference. Cassiopeia contains many bright stars that can be identified even in bright suburban skies.

IC 1805 and IC 1848 are located North of Perseus, and just to the left of the Double Cluster. Please see the star map below for reference. 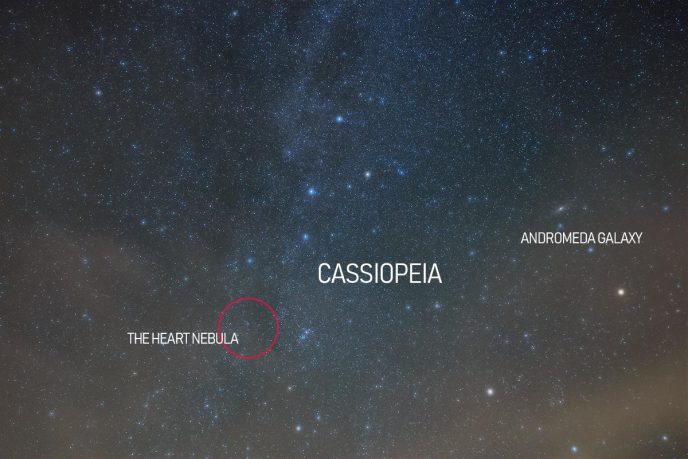 The location of the Heart Nebula in Cassiopeia. (Late September, Northern Hemisphere).

From certain latitudes in the northern hemisphere (such as my backyard in Ontario, Canada), the Heart Nebula is a circumpolar object meaning that it never sets below the horizon.

This is due to its close proximity to Polaris and the north celestial pole. Although it is above the horizon at all times of the year, the best time to observe and photograph in North America is generally between the months of September – January.

This deep-sky object resides very close to the equally beautiful Soul Nebula. The Heart & Soul Nebulae are often paired together in photographs using a camera lens.

To capture both objects in the same field of view, expect to use a focal length of approximately 200mm (Click here for an annotated image of the region). The Rokinon 135mm lens is a fantastic choice for this target when shooting with a crop-sensor (APS-C) camera like a Canon Rebel. 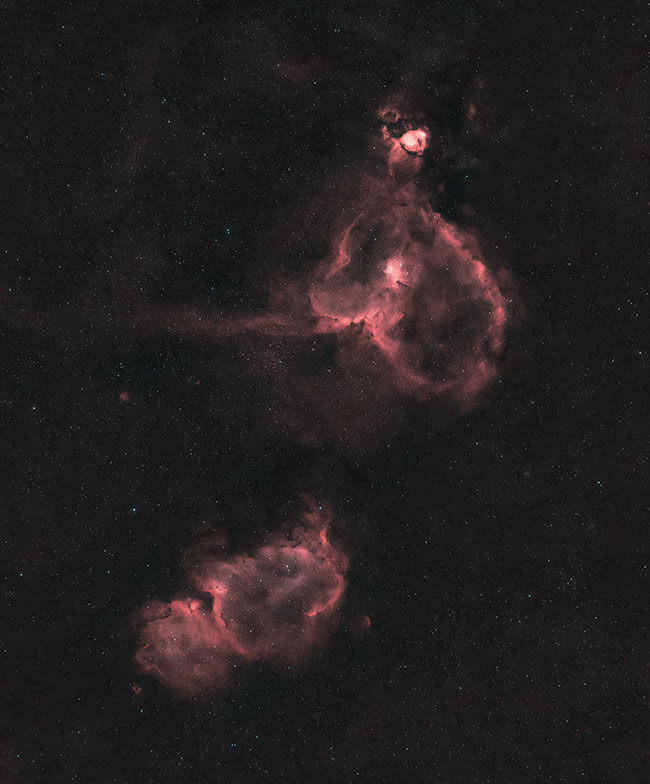 The Heart Nebula with a DSLR and Telescope

In September of 2017, I set up my iOptron SkyGuider Pro mount and pointed the telescope over the roof of my house, towards the Heart Nebula. After a fair amount of time framing the object up just right, I was able to pour in over 5 hours worth of integrated exposure time.

A lot of DSLR astrophotographers attempt to shoot the Heart Nebula using a small telescope because its large size is a great fit for the wide focal length of a small refractor.

The William Optics Z61 Doublet APO has a focal length of 360mm, which is considered to be a “wide-field” in the telescope world. As you can see in the image below, it’s a great fit on large nebulae like the Heart Nebula. 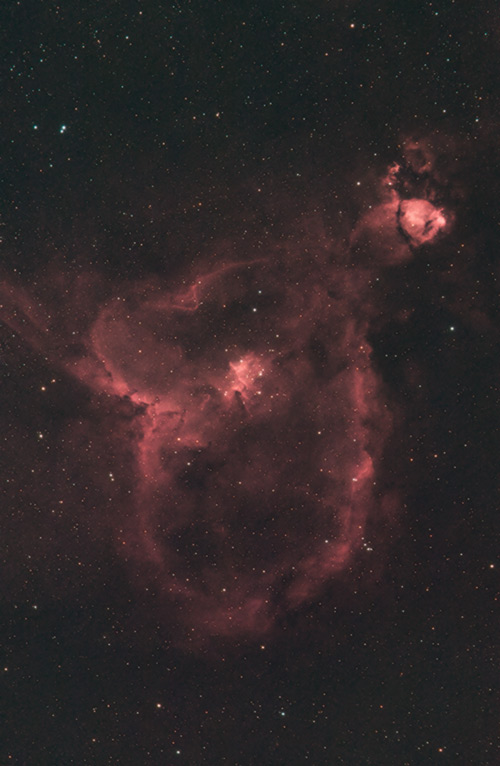 The photo turned out pretty decent, especially considering I was using a DSLR camera on a small “star tracker” style mount. Each image was 2-minutes in length at ISO 1600. Here is a look at the complete deep-sky astrophotography setup used for my image of the Heart Nebula shown above. 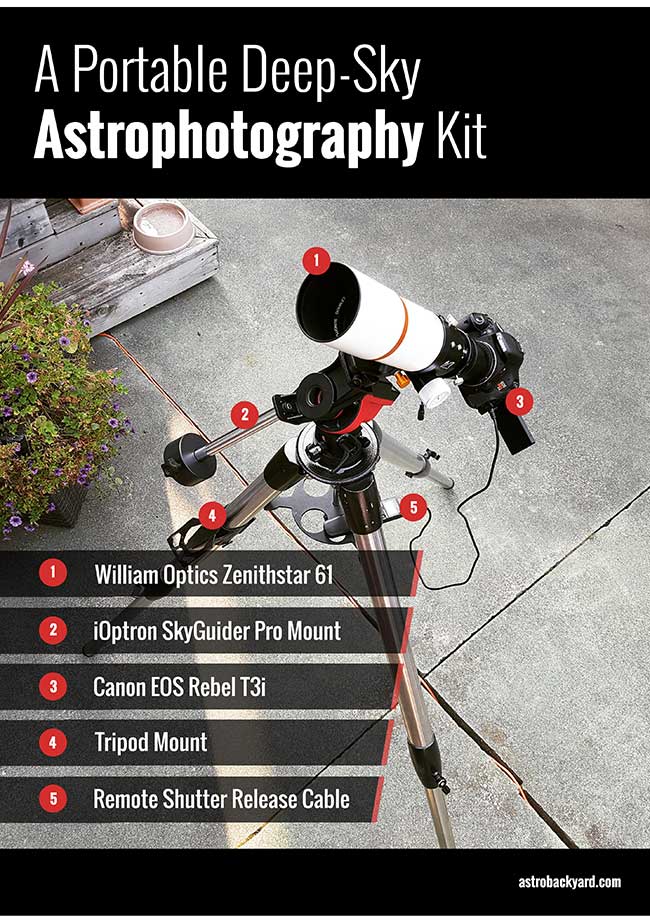 The camera used (Canon EOS Rebel T3i), has been modified for astrophotography by removing the stock IR cut filter. A modified DSLR is recommended when shooting hydrogen-rich emission nebulae such as the Heart Nebula.

Processing the data captured using a stock DSLR camera will make pulling the bright red areas of the nebula quite challenging.

The Heart Nebula can be challenging to photograph under light-polluted skies, but a light pollution filter such as the Astronomik CLS-CCD can really help. Taking the time to shoot calibration frames such as flat frames made the image processing stage much easier.

Without taking flat frames, the final stacked image would have suffered from extreme gradients and vignetting.

The Zenithstar 61 is an apochromatic doublet refractor, that requires a dedicated field flattener to produce images with sharp stars to the edge of the frame.

This lightweight telescope specializes in wide-field astrophotography, and the Heart Nebula was the perfect DSO to showcase this quality. 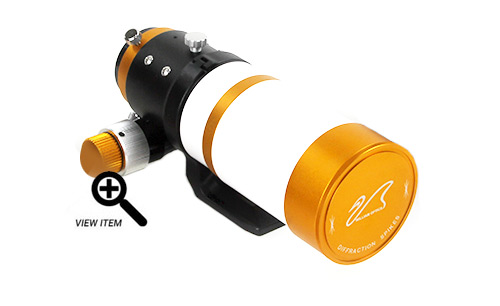 The telescope used to photograph the Heart Nebula above (Zenithstar 61).

As is the case with many emission nebulae in the night sky, applying narrowband details with a hydrogen-alpha filter can really make your images pop. I suggest applying data shot using a narrowband Ha filter to your existing color images to create a more dynamic image.

If you’re processing an image of IC 1805 captured with a color DSLR or one-shot-color astronomy camera, you may want to process the red channel separately for use as a luminance layer. The signal in the red channel is the strongest, and this is where the bright reds of IC 1805 (especially the NGC 896 and Melotte 15) shine through.

Due to its generally low overall surface brightness, it can be difficult to find and frame the Heart Nebula using a DSLR camera. Thankfully, the Fish Head Nebula portion is bright enough to show up in a short test exposure through your lens or telescope. Use this portion of the object as a point of reference to determine where the rest of the object lies.

Below, is a close-up image of the Fish Head Nebula captured with a monochrome camera, and narrowband filters. The image includes nearly 3 hours of total exposure time in Ha and OIII (bi-color). 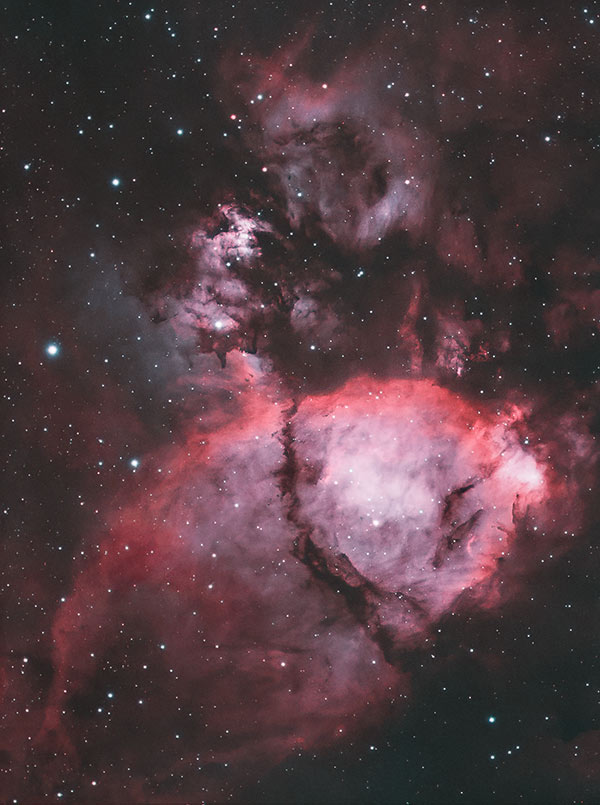 As far as nebulae go, IC 1805 is extremely large. It’s a unique size that is a little too big for most telescopes, yet too small for a standard camera lens. The sweet spot is in the 200-400mm focal length range. The exact focal length needed to frame up the Heart Nebula will depend on the type of camera sensor used and your image scale. 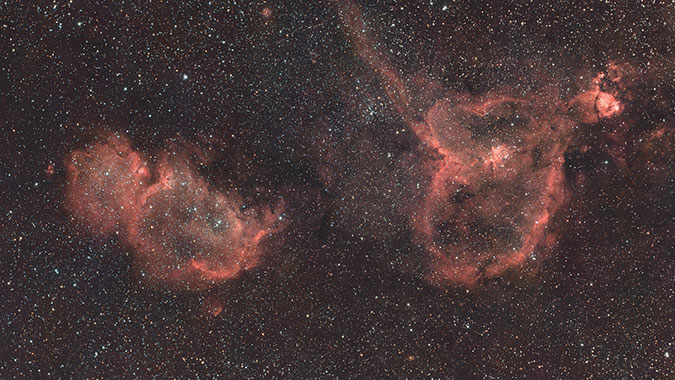 The Heart and Soul Nebula by Brent Newton