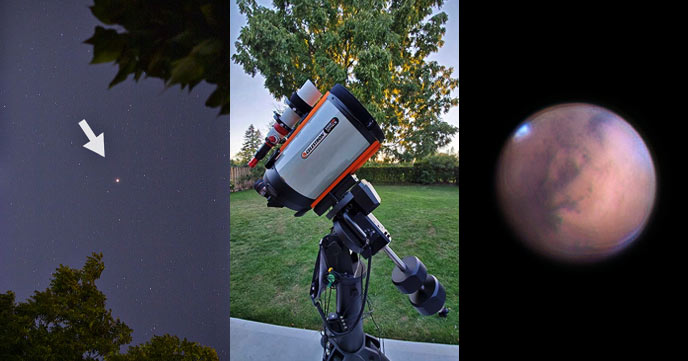 You may have started to notice a bright “star” in the night sky in the east. Today, my sister asked me “what is that bright red star I see every night? Is it a planet?

It sure is, it’s the red planet Mars. The reason it is so bright is that is nearing its closest approach to Earth, or, opposition.

In the video below, I photograph the planet Mars using an 11″ telescope from my backyard:

For the next few weeks, Mars will get bigger and brighter, making this an ideal time to take a series of photos over many nights to record the changes.

It will remain visible for the next 12+ months as it dawdles along in its orbit, falling further and further behind until it is on the opposite side of the Sun from Earth and we can no longer see it.

In the weeks leading up to the opposition, Mars will brighten gradually. By September 24, it will appear brighter than the planet Jupiter, and become the second brightest planet after Venus. 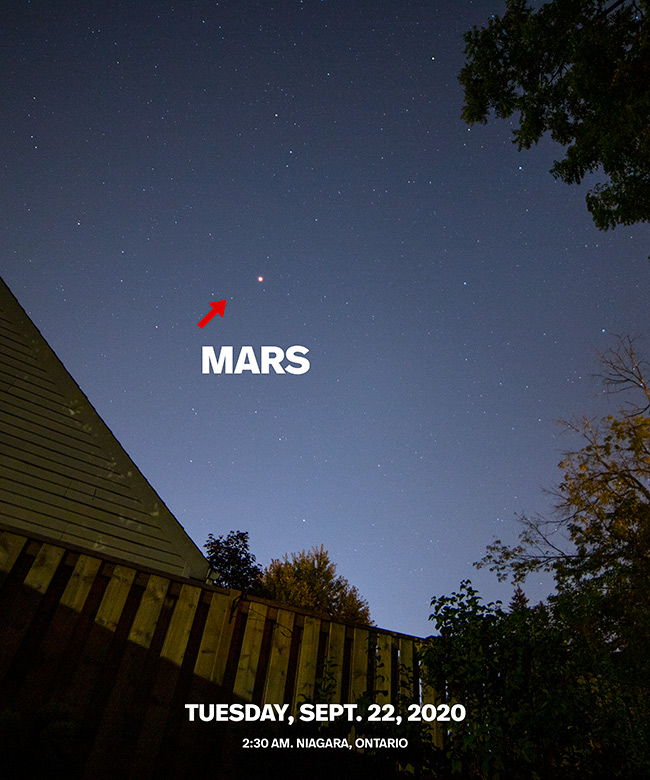 The bright red “star” in the sky is actually the planet Mars.

If you are wondering when Mars is closest to Earth in 2020, it’s October 6. So be ready with your binoculars and/or a telescope.

I’ve been photographing Mars over the past few weeks from my backyard. From my location in Canada, Mars is the biggest and highest its been in the sky since 2003!

As the planets go around the Sun, they travel in a counterclockwise direction, as viewed from the solar system’s North Pole.

The closest planet, Mercury, rockets around our local star in just 88 days; Venus in 7½ months; Earth, by definition, in exactly one year; and Mars, in 687 days, all by the time-scales we use here on Earth.

If you want to be absolutely correct, every planet travels around the Sun in exactly one year because each planet’s year is a different length.

Neptune’s just happens to be 165 Earth-years in length, so astronomers use Earth-units we are all familiar with to aid understanding. 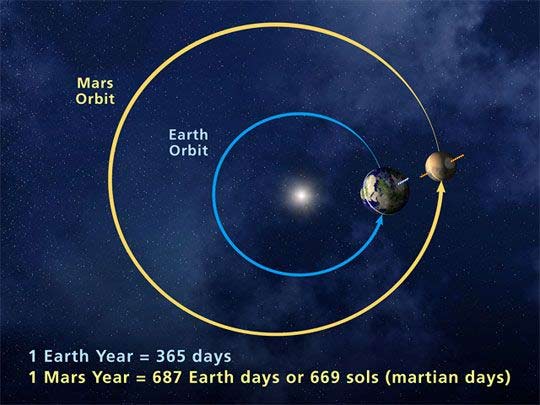 Earth is traveling at 30 kilometers (or 19 miles) per second as it orbits. This perfectly balances the centrifugal effect and prevents us from falling inwards to the Sun or drifting off into deep space forever.

That speed would get you from New York to Los Angeles in 130 seconds.

Similarly, Mars, which is about 40% further away from the Sun, only needs to travel at a leisurely 24 km (15 miles) per second to stay balanced.

Mars’ orbital circumference is also 51% longer than Earth’s and so, combined with the lower speed, that means we are only directly lined up on the same side of the Sun every ~790 days, or about 26 Earth-months.

As you can see in the Mars Opposition chart below, Mars appeared closer and brighter from Earth in 2018, but it was too low in the sky to observe in detail for those at mid-northern latitudes.

If you were standing on the equator when the Sun was directly overhead, and Earth was magically rendered invisible, Mars could be seen directly beneath your feet.

At night, if Mars was overhead, the Sun would be beneath your feet. Mars Opposition literally means that these two objects are on opposite sides of Earth.

At sunset, Mars rises on the eastern horizon at exactly the same time (during this period). Mars sets 12 hours later as the Sun pokes its head above the skyline. It really is that simple.

The other planets gravitationally “tug” on the planet Mars’ orbit and change the shape. The gas giant, Jupiter is especially influential on Mars’ orbit.

The Earth and Mars don’t lie in the same plane from an orbiting perspective. Planets take a slightly tilted path around the Sun in relation to the Earth.

The tilted orbital path of Mars in relation to Earth. NASA

This also happens to be the time of our closest approach to Mars, whose distance varies with each occurrence. The closest approach to Earth in the last 60,000 years was made in 2003. It will be another 2½ centuries (2287) before we get that close again!

This is because our two orbits are not flat relative to each other, nor are they round. They are elliptical and evolve over time, which is a major cause of Ice Ages, but that is a discussion for another day.

Nevertheless, this is a very good time to get a nice astronomical photo of Mars. The air is cooling off in the northern hemisphere in October so the atmosphere is getting steadier than the turbulent, rippled summer sky was.

Haul out your reflector telescope, camera adaptor, hot cocoa, and get ready for some nice images! On Sunday, September 20th, I took several images of the planet Mars through my telescope. 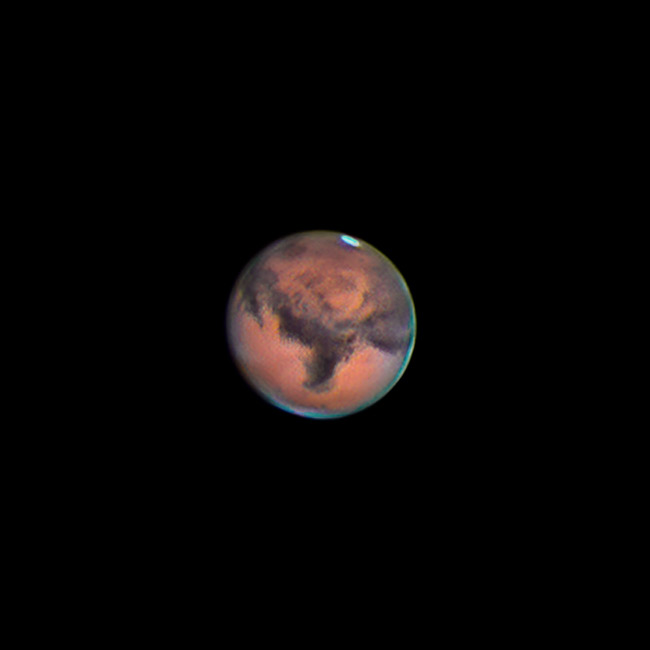 Mars up-close. Photographed on October 5th, 2020 from my backyard.

Interestingly, this was also a very confusing time for the Ancients who studied the skies centuries ago.

They would track Mars on its journey through the heavens, but suddenly, for a couple of months, it would become “indecisive”; it would stop moving, back up against the background stars, stop again and then resume its normal travels in the sky.

Was this some portent of disaster for these early superstitious observers? 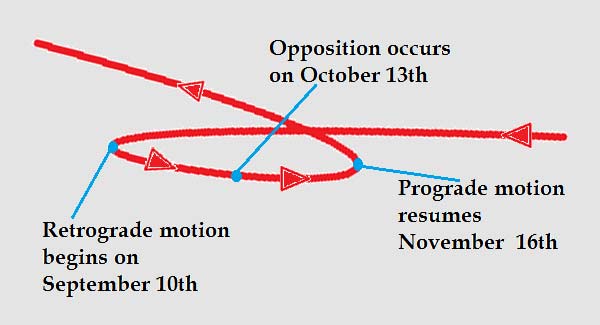 Humans are always looking for meaning in things. This is the sole cause for us being intelligent, reasoning creatures.

Eventually, we figured out the basics of orbital mechanics, determining that it was an illusion caused by Earth’s greater speed as we passed by slower Mars trudging along with its bigger orbit.

It’s like two cars on the highway where you see a car ahead of you obviously moving in the same direction as you are. As you pass it, it appears to be going backward for a moment as you’re nearby.

Once you’re past it, you can see it is still traveling forward. It was never actually traveling backward, of course.

Where is Mars in the Night Sky?

On October 13, 2020, Mars will be in the east, close to Uranus, in the constellation Pisces. Take a look at the star map shown below for a reference.

To find out where and when Mars will be in the night sky, you can use a free planetarium app on your smartphone like Stellarium.

You can also use the free online version of this useful tool to track the planets and other celestial wonders. 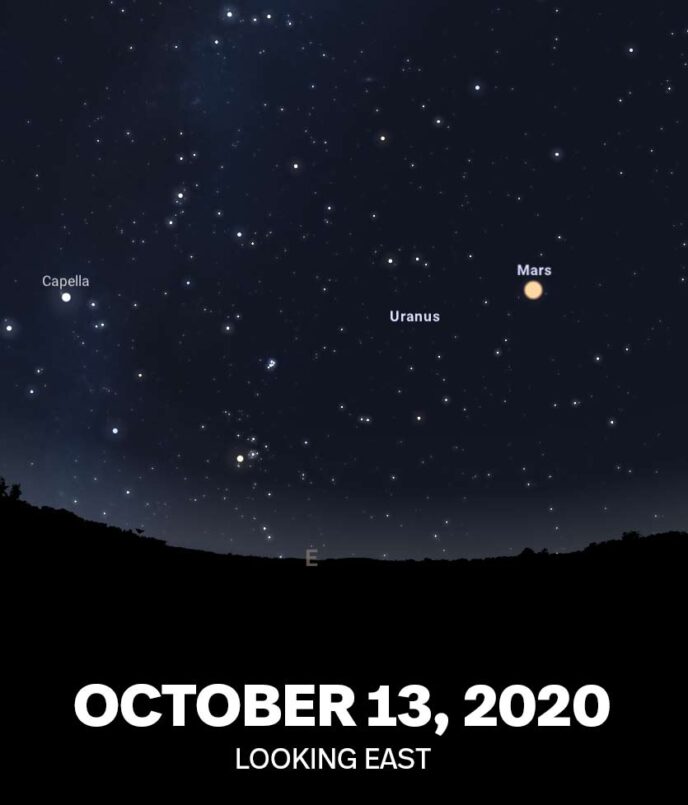 Observing Mars Before, During, and After Opposition

On September 10th, 2020, Mars came to an apparent halt in our skies and is now moving opposite to how we might instinctively expect it to move.

We will reach true Mars Opposition on October 13th, (specifically, at 23:20 h Universal Time), and Mars will appear to resume its forward (prograde) motion once again on November 16th, 2020.

If you were to observe now, Mars is deep within the “V” of the constellation Pisces. At Opposition, it will be as shown in this image, both higher, and moving towards the southeast. 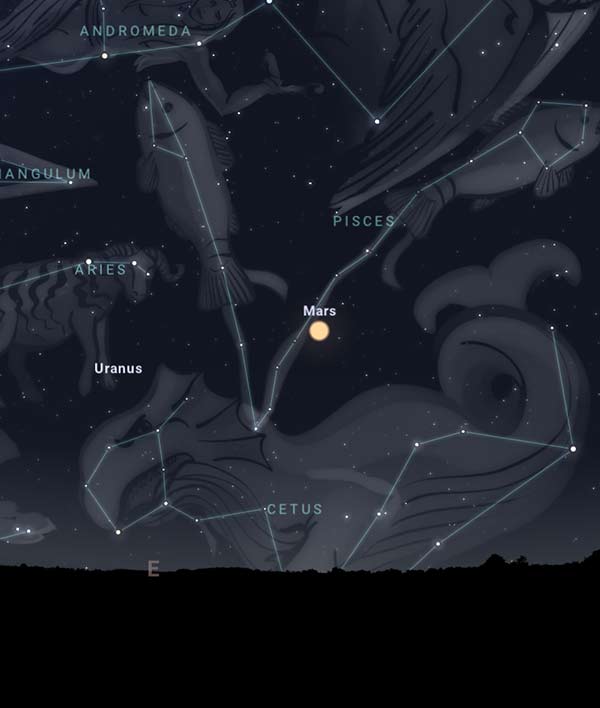 At the time of Opposition, Mars is going to be one of the brightest objects in the nighttime sky, outshone by only Venus and the Moon. Its steady, unwavering, reddish hue is a dead giveaway, so you won’t mistake it for anything else.

When it rises, it will chase Saturn and Jupiter, both currently together in the southern sky (though about 3-4 times higher). Mars will be brighter than either of them! If you want a photograph, this really is the best time.

The worlds of our Solar System shine by the reflected light of our Sun. That light only travels a few millions of kilometers/miles instead of many light-years of distance.

There is also a great deal more of it, thus it easily passes through our atmosphere. Point-sources of light (e.g. stars) are very prone to distortion, so they are not nearly as steady.

Times will vary depending on where you are observing from. If you’re near the Great Lakes in North America (say, the Chicago/Toronto area), and looking east at about 19:00 h (7 pm), Mars should have just risen; by about 20:00 h (8 pm) it should be sitting about 15° above the horizon.

By 01:00 AM it should be due south from this location, and by 06:30 AM it will just be setting in the west as the sunrise brightens the opposite horizon. 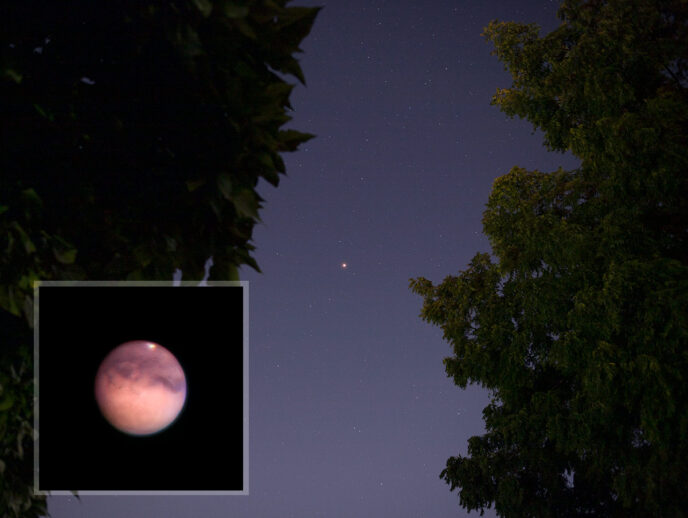 It also makes it more understandable as to why we can only launch (economically) to the Red Planet every couple of years. We want to make the trip as quickly as possible, especially if we’re going to send people eventually.

Mars is my favorite planet in the solar system, other than our home planet, of course. I like it because it is a rocky planet that we may someday visit.

Humans have sent robots (Mars Exploration Rovers) to the surface of Mars to explore and photograph this distant planet. It amazes me that scientists and engineers are able to send a rocket into space that meets up with a planet in orbit many months later.

The Mars 2020 Perseverance Rover was launched on July 30, 2020, and will arrive on the red planet on February 18, 2021. Its mission is to search for signs of ancient microbial life.

Here are some interesting facts about the planet Mars: 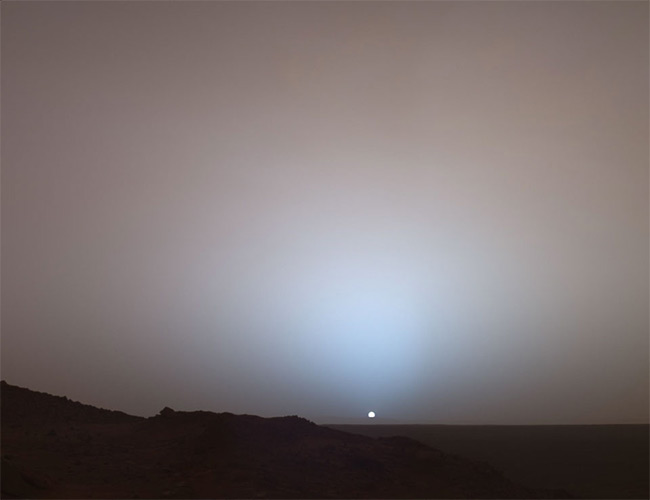 Now is a great time to observe the Planet Mars from your own backyard. It’s closer and brighter than ever, and its unmistakable reddish hue makes it obvious that it is not just another star.

If you’re an astrophotographer, the next month or so is the best possible time to photograph this planet, as its diameter and magnitude are at their peak.

I have been photographing Mars with my Celestron Edge HD 11 telescope, and have been absolutely thrilled with the results. I can see surface details and the polar ice cap on Mars, which is a remarkable feat from the ground. 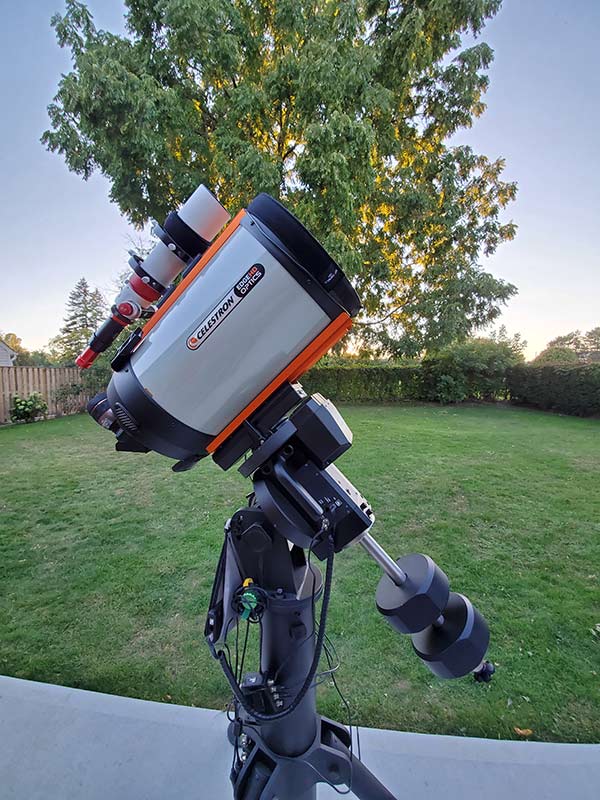 The telescope used for my images of Mars. (Celestron Edge HD 11).

I have been capturing the images using a monochrome CMOS camera, the ZWO ASI290MM Mini. I use a free software called FireCapture to take video files of the planet through each RGB filter.

A typical video will include 15-20K frames, and I select the best 25% to stack in another program called AutoStakkert!From there, I bring the stacked image into Registax to sharpen the image and reveal surface details.

Finally, I can build an RGB image in Adobe Photoshop by applying each color layer into channels, creating a full-color image. Here is one of my best pictures of Mars to date: 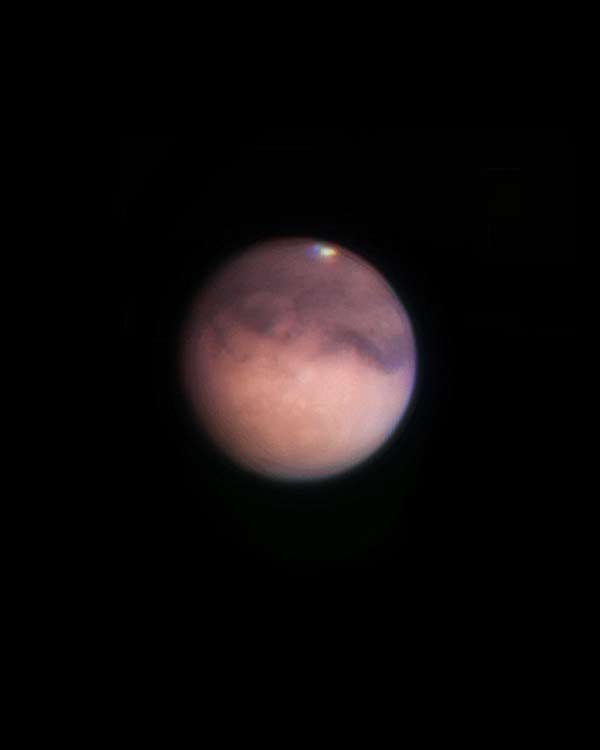 Mars captured using a dedicated astronomy camera through my telescope.

I hope you get a chance to take a look at Mars over the coming months through binoculars or a telescope. It is an extraordinary sight that you won’t soon forget.