The Summer Triangle is an asterism that includes three bright stars in the night sky: Vega, Deneb, and Altair. This beacon of warmer weather is observable in the northern hemisphere much of the year but is highest in the sky in July-August. 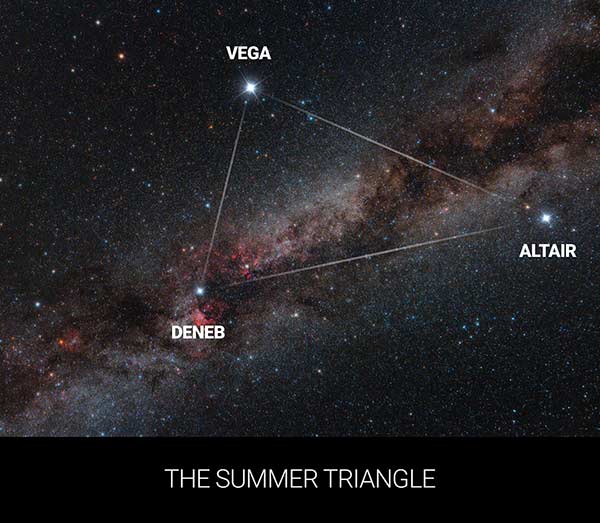 The 3 stars of the Summer Triangle can be seen in this long exposure image of the Milky Way.

The term, “Summer Triangle” was popularized by the British astronomer Patrick Moore in the 1950’s, although its formation has been noted by many others dating back to the 1800s. The name can be found in constellation guidebooks as far back as 1913.

Despite being named the “Summer” Triangle, those of us in the northern hemisphere can actually view this asterism for part of the night at any time of year.

Constellations and asterisms are fun to photograph with a DSLR camera and wide-angle lens. They are often much too large to be captured with a telescope, as these are better suited for the deep sky objects found inside of the asterism.

In a Sky and Telescope article, I discovered that the earliest “official” written reference of the Summer Triangle wasn’t until 1839 when Austrian astronomer Johann Joseph von Littrow’s Atlas of the Starry Heavens stated:

” . . . you can immediately recognize a very striking, large, isosceles triangle in the sky, which is formed by three stars of the first magnitude, namely through Vega, Deneb, and Altair.” 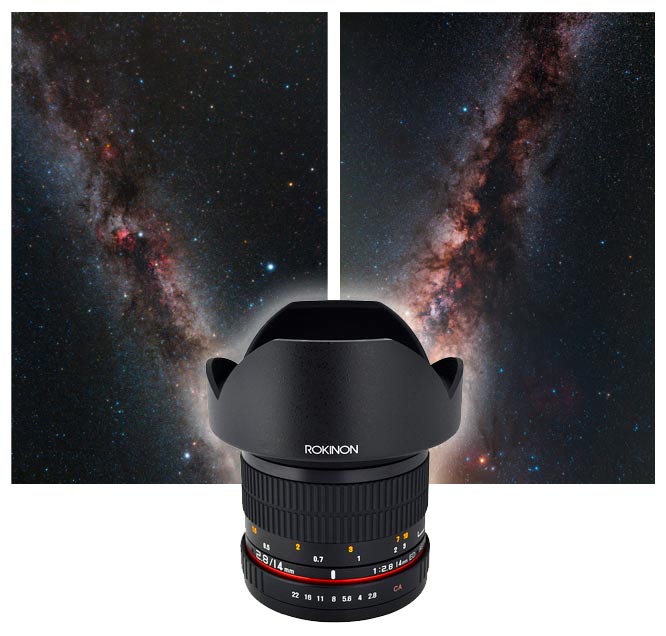 The camera lens used for my photo of the Summer Triangle is the Rokinon 14mm F/2.8 (Amazon).

How to Find the Summer Triangle

The Summer Triangle is huge and spans across the Great Rift of the Milky Way. It touches multiple constellations but is easy to identify once you understand the scale of this star pattern.

From Vega, travel over to the constellation Cygnus, and find the brightest star in the Northern Cross. This is Deneb, which is star number 2 in our star pattern.

Finally, we head to the summer constellation Aquila the Eagle to complete the triangle pattern. Altair is the second brightest star in the Summer Triangle, and includes 2 fainter stars on either side of it.

The best way to enjoy the Summer Triangle is to drive out of the city and head for the country on a moonless night. This asterism frames a star-filled, bright section of the Milky Way.

A notable feature of this area is the Cygnus Star Cloud, which glows intensely between Deneb and double-star, Albireo. Those using binoculars can appreciate this star-rich neighborhood of our Galaxy by looking towards the base of the Northern Cross.

Another memorable sight is the nearby Northern Coalsack, which is part of the Great Rift in the Milky Way. The Funnel Cloud Nebula (as referred to by Sky and Telescope) lies east of Deneb, which is the otherwise unnamed dark nebula located here.

Stars in the Summer Triangle:

When Can You See the Summer Triangle?

In the northern hemisphere in June, the Summer Triangle begins to reveal its 3 bright stars in the eastern sky as nightfall sets in. This is one of the best times to observe and enjoy this star pattern, as it travels across the night sky all night long.

As the seasons change, so too does the positions of Vega, Deneb, and Altair. In the late fall and winter, these 3 stars appear high into the western sky, with its southernmost star (Altair) setting by about 10:00 pm.

The lens used for the photo below was a Rokinon 14mm F/2.8 for Canon EOS. The images were captured from a Bortle Scale Class 2 site at the Cherry Springs Star Party in 2018. I have labeled some of the most popular deep-sky objects in Cygnus, although they are quite small in this wide-angle image. 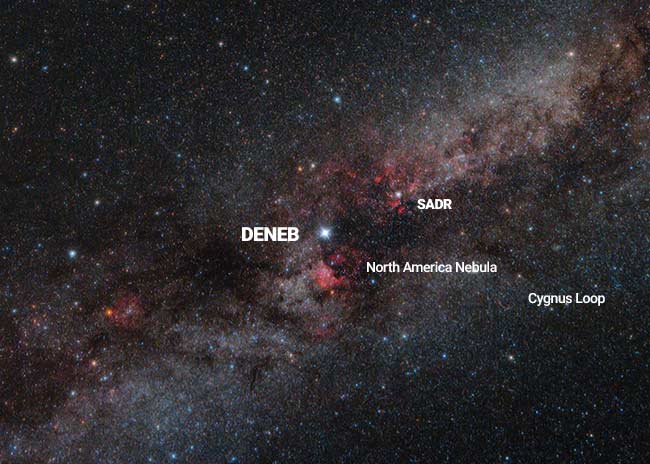 Here is a closer look at the North America Nebula in Cygnus, using a 300mm telephoto camera lens. NGC 7000 sits just below Deneb, which makes it very easy to locate and photograph. This nebula is extremely faint when observed visually, but shows up very well in a long exposure image.

Images captured of the Summer Triangle using astrophotography techniques that improve the signal-to-noise ratio will undoubtedly contain traces of the hydrogen emission nebula regions in Cygnus. 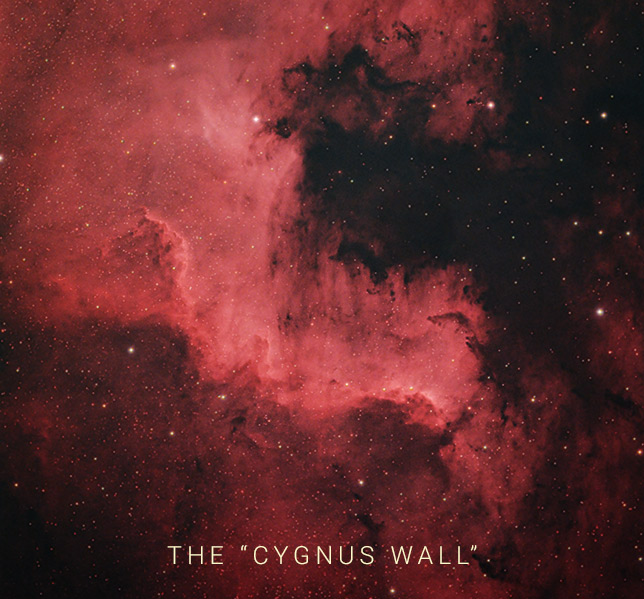 The North America Nebula and the Cygnus Wall, near Deneb.

Cygnus is not the only constellation associated with the Summer Triangle with fascinating deep-sky objects within in. There are some noteworthy targets in Lyra as well, including a well-known planetary nebula known as Messier 57, or more commonly, the Ring Nebula.

Vega is a blueish-white main-sequence star with a magnitude of 0.03. From the northern hemisphere, it is strikingly bright and noticeable in the night sky. Vega is 40-times more luminous than the sun, and one of the most luminous stars in the vicinity of our solar system.

From an astrophotography perspective, Vega has a number of advantages. It’s an excellent star to use when focusing your telescope when using a Bahtinov mask because it is extremely bright. The ultra-long star diffraction spikes created by Vega can help you achieve an accurate focus of your telescope. 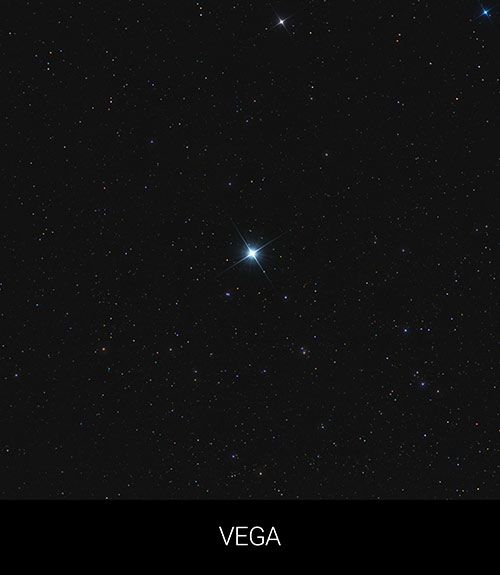 Another benefit Vega has for astrophotography is its convenient location in the night sky for star alignment. A 3-star alignment routine can be used to calibrate the pointing accuracy of a GoTo telescope mount. Because Vega is so bright and reaches high into the sky, it’s one of the most useful alignment stars you could use.

As a matter of fact, each one of the 3 stars that create the Summer Triangle are handy choices when it comes to aligning your telescope mount. For tight spaces such as a backyard patio, there is a good chance that at least one of these stars is visible at most times of the year. 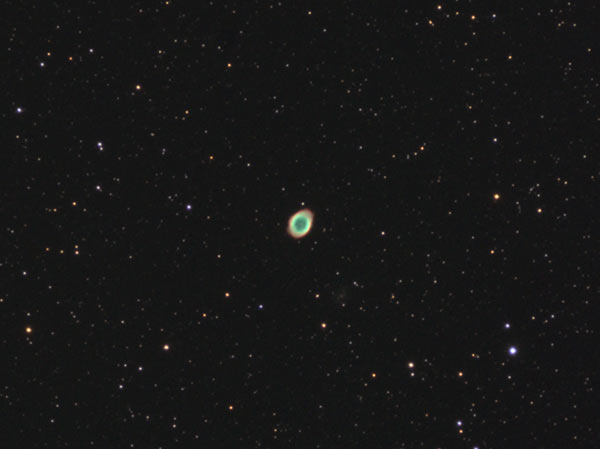 Messier 57 (The Ring Nebula) lies in the constellation Lyra, not far from Vega.

Altair can be identified as a bright star in Aquila with 2 fainter stars on each side of it. I often use Altair during the star alignment process of my equatorial telescope mount. The core of Milky Way begins to reveal itself in an impressive fashion just below Altair from the northern hemisphere.

Being the most southerly star in this asterism, it is also the first to set in late November around 10:00 pm. The rising Summer Triangle asterism in the late spring signifies the return of summer in the northern hemisphere, and a fading triangle to the west means winter is here.

If you want to photograph the Summer Triangle asterism and the beautiful regions of nebulae and stars that surround it, dark skies will make the greatest impact on your image. I have tried to photograph this area from the city before (see photo further down the post), but wide-angle photos are incredibly challenging in areas of heavy light pollution.

A DSLR camera in manual bulb mode is best, as you’ll want to expose your images for a full 30-seconds to let as much starlight hit the sensor as possible. I like to use a daylight white balance when taking wide-angle photos of the night sky, although I usually adjust the color balance in post-processing anyway.

When shooting astrophotography images with a DSLR camera, it’s important to always shoot in RAW image format so that you are collecting the maximum amount of data. You’ll have a lot more control over the image in the processing stages with RAW over a compressed .JPG image. Stacking several images together in an application like DeepSkyStacker can really help to improve the SNR (signal-to-noise) ratio of your final image.

A wide-angle camera lens like the Rokinon 14mm F/2.8 or similar is ideal because a camera lens like this can record plenty of signal in a single exposure. Although this lens is very fast, I didn’t take my photos with the lens “wide open” at F/2.8. For a sharper image, I adjusted the manual aperture (f-ratio) control ring of the lens to F/3.2. The following image was created by stacking 40 x 2-minute exposures at ISO 1600. 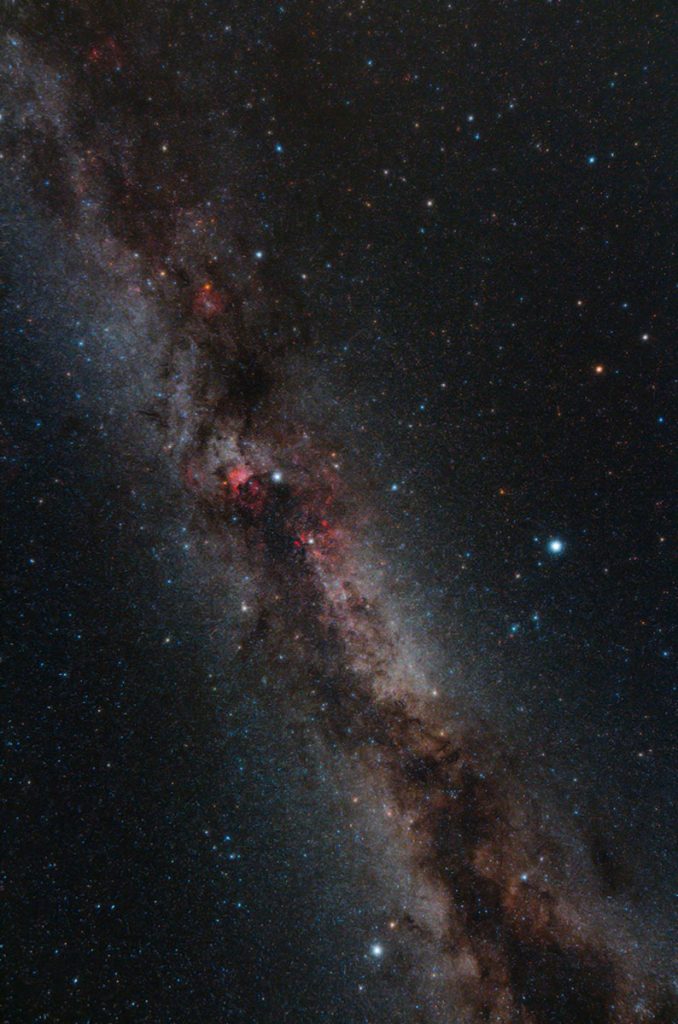 The camera used was a Canon EOS Rebel T3i with the full-spectrum modification. It is not necessary to modify your camera for astrophotography (more on that here), but it will help to reveal much more of the red hydrogen-alpha nebulae in the night sky. In the photo above, this is most noticeable in Cygnus, namely the North America Nebula, Sadr Region, and even the Elephant’s Trunk Nebula in Cepheus.

Wide-angle Milky Way photography is one of my favorite disciplines of the hobby and is possible using an entry-level DSLR camera and an affordable wide-angle lens.

A star tracker is not essential to capture a great image of the Summer Triangle, but it will certainly help. A camera tracker such as the iOptron SkyTracker Pro is an easy way to compensate for the rotation of the Earth and avoid star trailing in your images. When accurately polar aligned, you can expect to take images of 2-3 minutes (unguided) with a wide-angle camera lens.

In the end, the same best practices used for deep sky imaging through a telescope apply to wide-angle photos with a camera lens. Capture as many sharp images as possible, and combine them to increase signal and reduce noise. Then, it’s just a matter of stretching the data a little further in Photoshop to increase the saturation and apply additional tweaks such as minimizing the stars. 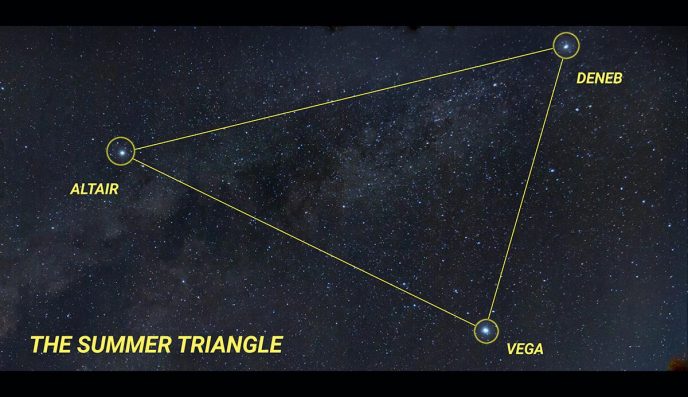 Astrophotography from the city. My best attempt at this asterism under light-polluted skies.

To me, the Summer Triangle signifies the heart of the summer astrophotography season, where the nights are short and warm. It is one of the best times of the year to enjoy astronomy because you can comfortably sit under the stars late into the night.

Once you have familiarized yourself with this asterism, it will be hard to ignore it whenever you see it in the night sky. Share this information with your friends and family so they too can appreciate our incredible night sky on a deeper level.

To learn how to capture wide-angle images of the night sky using your DSLR camera and lens, have a look at my top 7 astrophotography tips for beginners.

More Asterisms in the Night Sky

Asterisms like the “Summer Triangle” are alternative names given to a pattern of bright stars in the night sky. These “connected” stars are often a subset of a constellation and will vary between cultures and locations.

Our minds creatively seek patterns in the dotted stars of the night sky, and some people see different figures being drawn out than others. For example, Sue French refers to the Jaws asterism talked about in the book: The Deep Sky: An Introduction in this entertaining Sky and Telescope article. 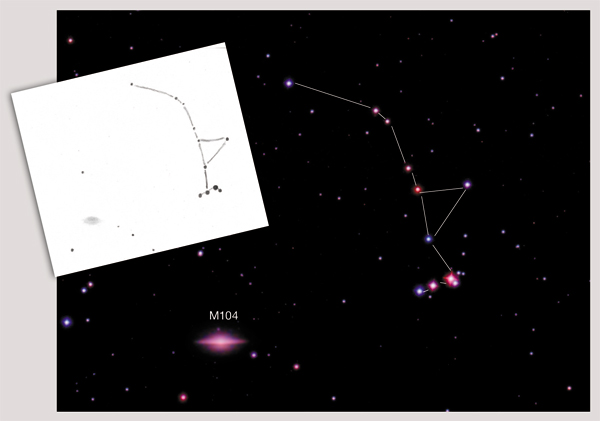 Here are some of the most widely-known asterisms in the night sky: