The Cygnus constellation is considered to be one of the most interesting areas of the night sky, due to the many deep-sky objects found within it. The “Swan” star pattern is easily recognizable for amateur astronomers in the northern hemisphere and flies through a dense area of stars in the Milky Way.

The “celestial swan” most prominently flies across the night sky throughout the summer and fall months in the northern hemisphere. The brightest star, Deneb, marks the tail of the swan, while Albireo marks the Swan’s head. Sadr, near the center, marks the swan’s breast, sitting at the intersection of the Northern Cross.

Cygnus contains 6 bright stars that appear to form a “cross”, the brightest of which being Deneb. Deneb is one of the 3 stars found in the Summer Triangle asterism and is one of the largest white stars in our sky. 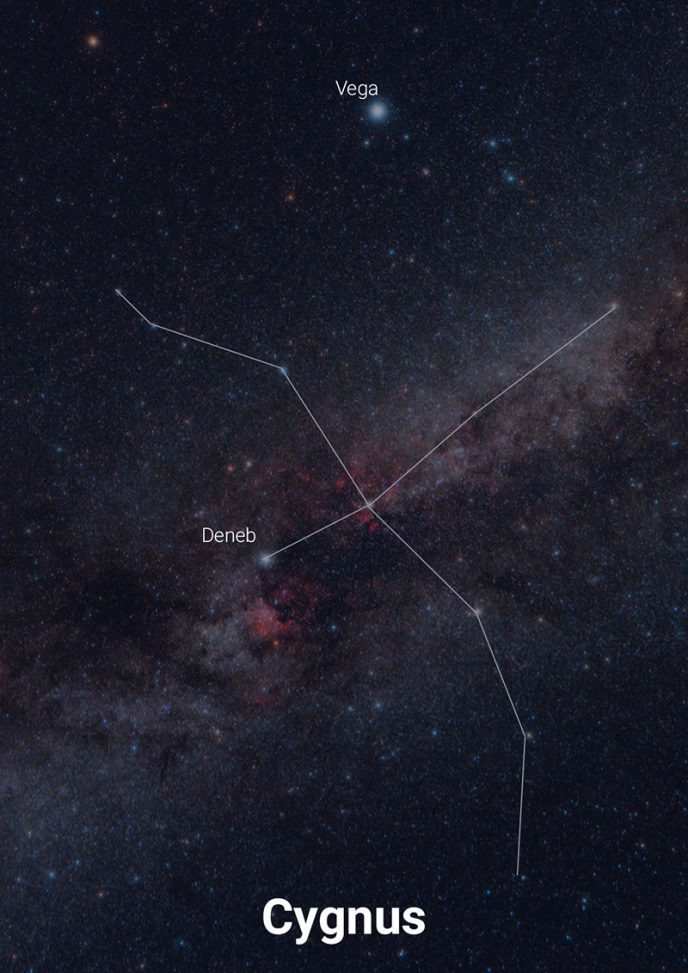 The Cygnus constellation lies on the northern skies upon the Milky Way. Its name translates into “swan” in Latin Greek. The reason behind choosing a name such as this is quite obvious once you see the constellation’s shape as it looks like a swan.

You can easily spot this constellation due to it featuring a popular asterism (a group of stars smaller than a constellation) which is known as the Northern Cross.

From mid-northern latitudes, I find that looking towards the center of the Northern Cross is one is the best ways to judge the level of light pollution from your location. From a Bortle Scale Class 6/7 site (like my backyard), I can faintly make out the glow of the Milky Way passing through this area.

From a dark sky site (like the one shown below), this region glows intensely to the naked eye. It is truly a sight to behold first-hand.

Through astrophotography, we can enhance this brilliance and even showcase the stunning colors present in the night sky. Cygnus can be spotted at the center of the image, with Deneb and the pink glow of NGC 7000 visible. 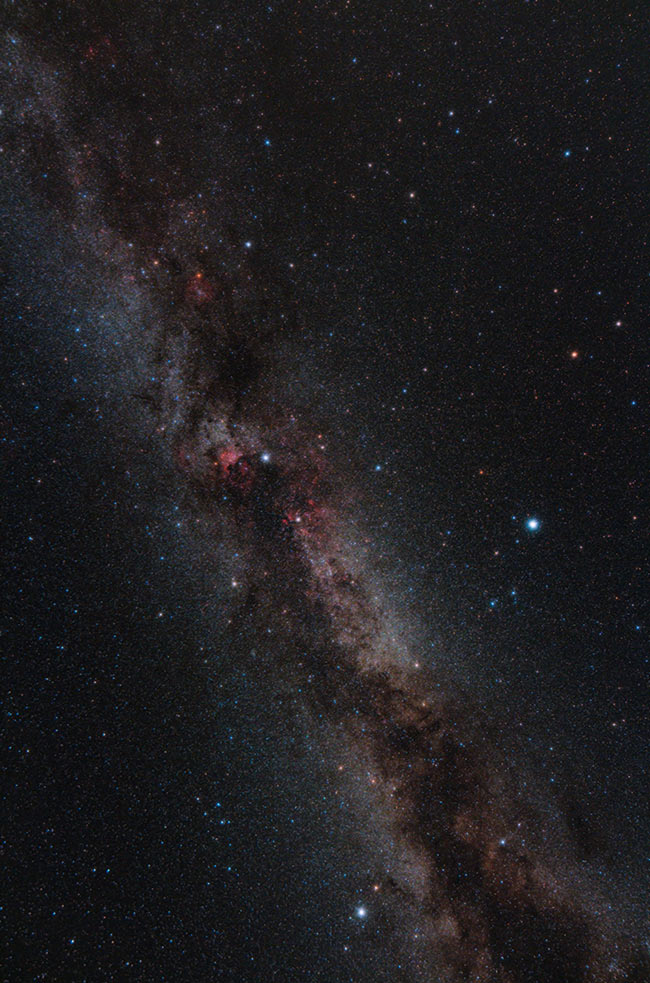 In the night sky, the 16th largest constellation is Cygnus itself as it has an area of 804 square degrees. To be exact, it lies between the latitudes of +90 and -40 and can be seen in the fourth quadrant.

Due to its mythical origins, the constellation is a part of the Hercules family of constellations. This family includes Centaurus, Crater, Crux, Hercules, Hydra, and so on. The closest neighbors of Cygnus are Cepheus, Lacerta, Pegasus, and Lyra.

Within Cygnus, there are at least 10 stars that are known to have planets.

There are a lot of cataloged nebulae in Cygnus, most notably the North America Nebula, and the Crescent Nebula.

The photo below shows just how much hydrogen gas is located in the region surrounding Sadr, including the Crescent Nebula (NGC 6888). 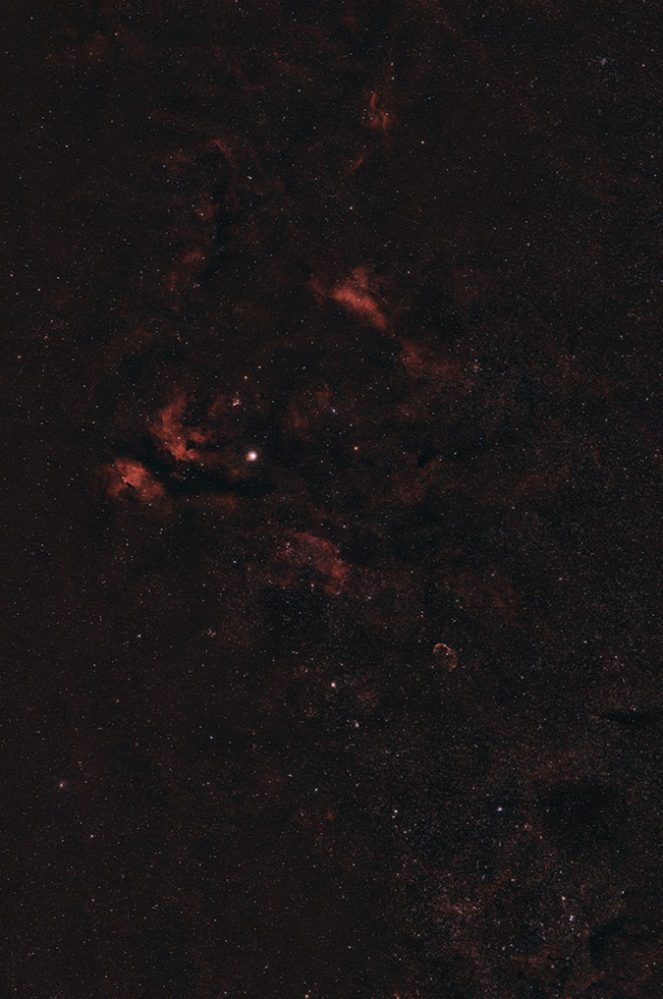 Where it is located

Since Cygnus is one of the easiest constellations to recognize. You can see it from June to December in the Northern hemisphere; and in the Southern Hemisphere, it can be seen during the winter months.

For those in the Northern Hemisphere, during June and July, Cygnus can be seen at around 10 pm in the northeastern sky. It will be directly above the head by 2 am and will stay there until dawn. In December and January, the constellation will be visible from 6 pm and will gradually disappear before the clock strikes 10 pm.

For those aiming to view the beautiful constellation from the Southern Hemisphere, during the months of July and August, Cygnus can be seen in the north-eastern sky from about 9 – 10 pm as it moves towards west throughout the night. 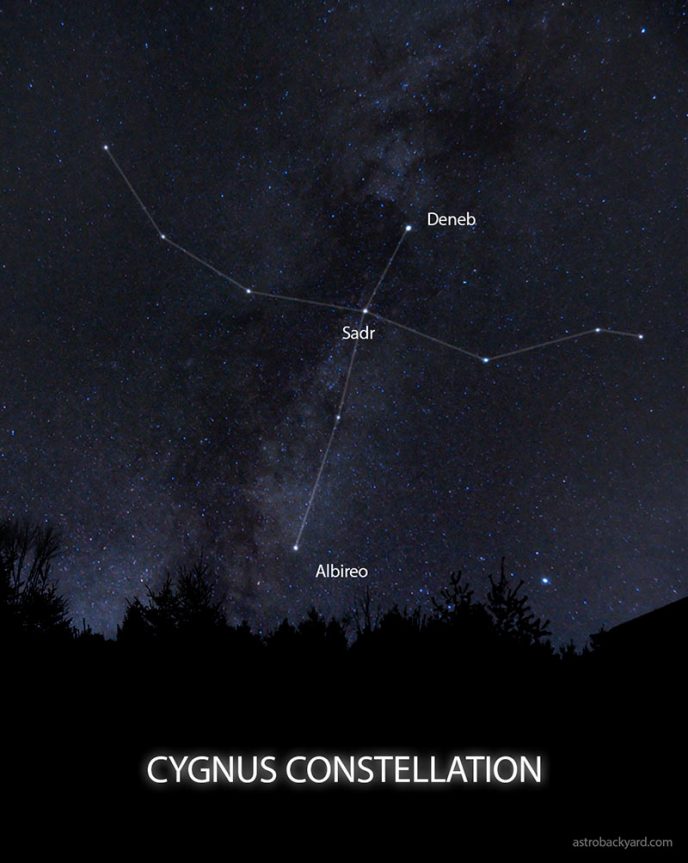 From mid-northern latitudes, the constellation Cygnus rises high into the sky on summer nights. This means that it is very easy to spot without the worry of obstructions such as trees or neighboring houses.

This is one of the many reasons Cygnus is such a popular choice for amateur astrophotography and visual observations through a telescope. I recommend a Dobsonian telescope with at least 8″ of aperture for impressive views of the deep-sky objects such as the Veil Nebula inside of Cygnus. 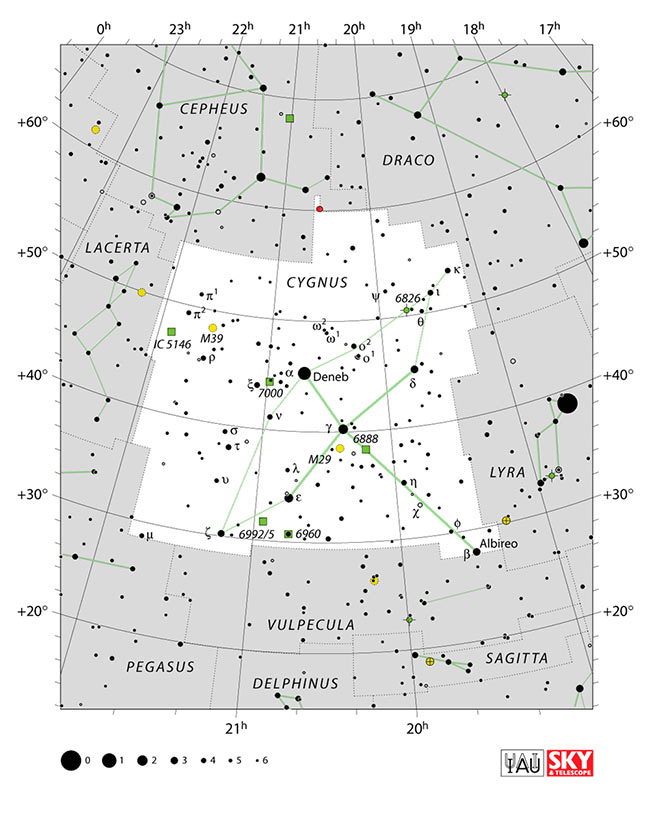 Cygnus constellation star map. Sky and Telescope and the IAU.

The Cygnus constellation is associated with several myths. The most notable of which is the legend of Cycnus and Phaeton’s (mortal sun of Helios- God of Sun) friendship.

The legend goes that the two friends were racing each other in the skies.

As the race got intense they flew too close to the sun and unfortunately, their chariots burned down. Both of them came crashing back to the Earth.

When Cycnus regained his consciousness, he searched around for his dear friend Phaeton and found his dead body at the bottom of the Eridanus River. 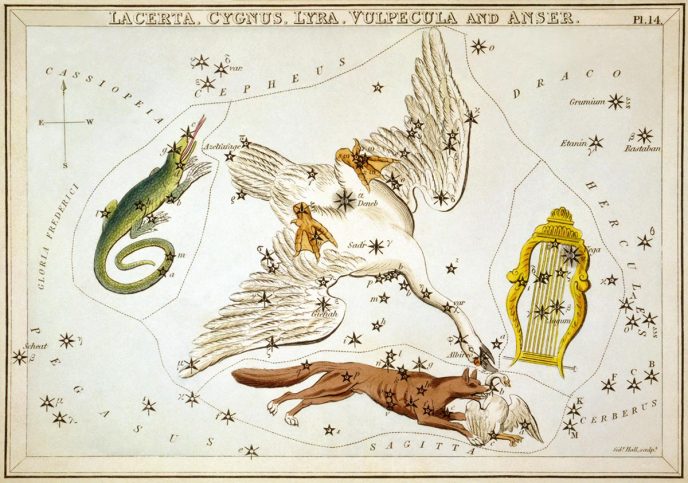 A star map depicting the Cygnus constellation as a Swan from 1825. Wikipedia.

As a human, he was unable to retrieve his friend’s body so he made a pact with the God of Gods, Zeus. If Zeus would allow Cycnus to transform into a swan, Cycnus would live only as long as a swan usually does.

Zeus agreed to this, and Cycnus was able to gain access to his friend’s dead body and give him a proper burial. By doing such, Cycnus allowed Phaeton’s soul to travel to the afterlife.

Zeus was touched by Cycnus’ action and therefore placed him in the sky, as an image of sacrifice and friendship. 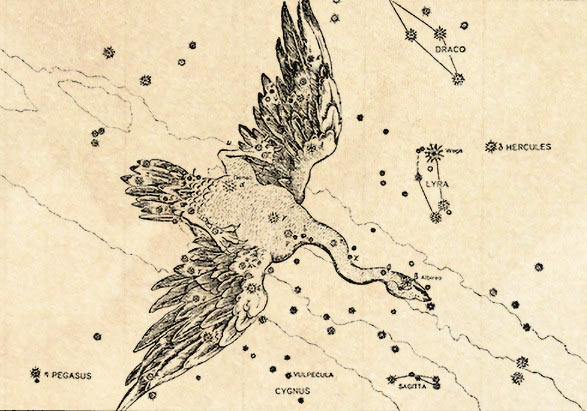 Apart from Greek mythology, the Cygnus constellation also has roots in Chinese legends.

The legend of “magpie bridge” states that Niu Lang and Zhi Nu love each other deeply but are unfortunately not allowed to be together by the Goddess of Heaven because Zhi Nu is a fairy, whereas Niu Lang is only a mere mortal.

The lovers secretly get married which the Goddess does not approve of at all and thus places a river in the sky to keep them apart. This river is our very own galaxy i.e. Milky Way.

The legend goes that every year, in order to rejoin the lovers, all the magpies gather together and form a gigantic bridge over the river. Our Cygnus constellation is this very own magpie bridge. 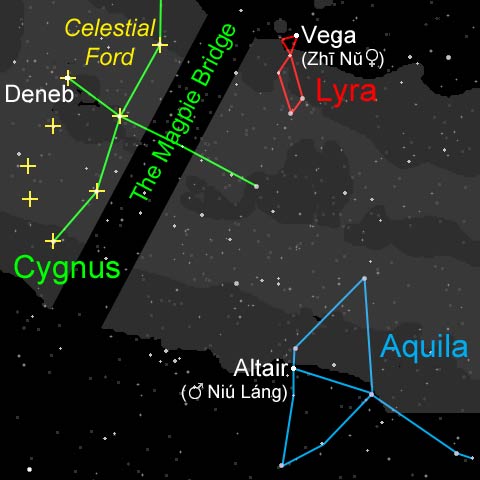 The “Magpie Bridge” (Rive of the Milky Way). Wikipedia.

The brightest star within Cygnus is Deneb which is also called Alpha Cygni. It has a magnitude of 1.25. For those who are new to the world of astronomy, the lower the magnitude of a star, the brighter it is. Deneb lies roughly 2500 light-years away from Earth and it is a bluish-white supergiant.

In comparison to our mere sun, Deneb’s diameter is around 200 times greater and it is 200,000 times brighter.

The second brightest star within the constellation is called Sadr. It has a magnitude of 2.23 and is approximately 1500 – 2000 light-years away from Earth. The Sadr region is packed with intense H II gas and includes several noteworthy deep sky emission nebulae.

Our sun pales in comparison to Sadr as it has a radius of 150 times that of the sun. Sadr is a bright yellow-white supergiant.

It is often referred to as “the beak star. Moreover, it is also one of the stars which form the asterism Northern Cross.

There are several deep sky objects in Cygnus, ranging from emission nebulae to supernova remnants. The Cygnus constellation is full of nebulous regions including the Sadr region that includes the Butterfly Nebula.

Although there are only two Messier objects in Cygnus (Messier 29, and Messier 39), there are plenty of NGC, IC, and Sharpless Catalog objects.

The Sadr region (shown below) is an excellent example of how much hydrogen emission gas is concentrated in this area of the night sky. 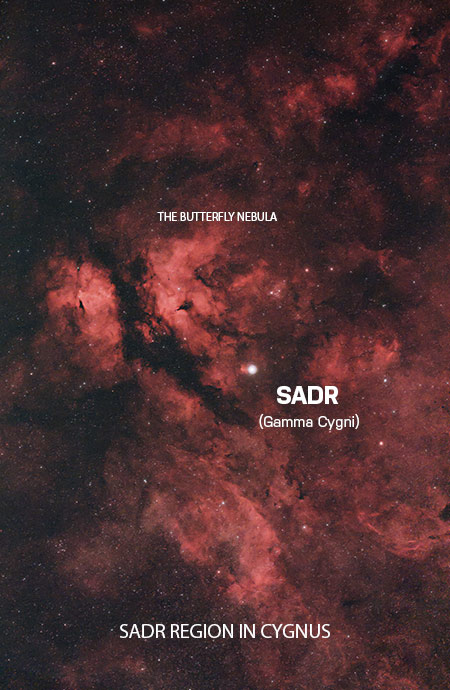 Of course, you can not see these objects with such clarity through the telescope eyepiece. Several long-exposure images were captured to maximize the amount of light gathered on each deep-sky object. Then, the color and subtle details must be teased out during the image processing stages (see my image processing guide). 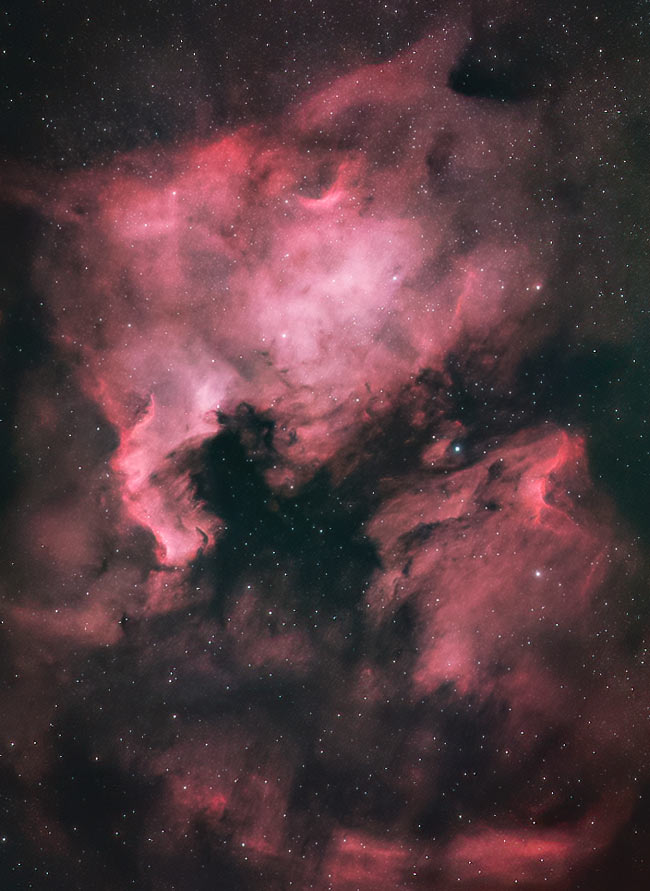 Here are some of the most popular nebulae in Cygnus: