The Cave Nebula (Caldwell 9, Sh2-155) is a diffuse emission nebula within a larger nebula complex that includes a reflection nebula, and dark nebula. This deep-sky object is located in the constellation Cepheus and lies roughly 2,400 light-years from Earth.

Sharpless 155 is an ionized H II region, where new stars are being born. Small telescopes will have a tough time revealing the faint structure of the Cave Nebula through the eyepiece, but amateur photographs (astrophotography) can uncover the beautiful color and interstellar details of this nebula. 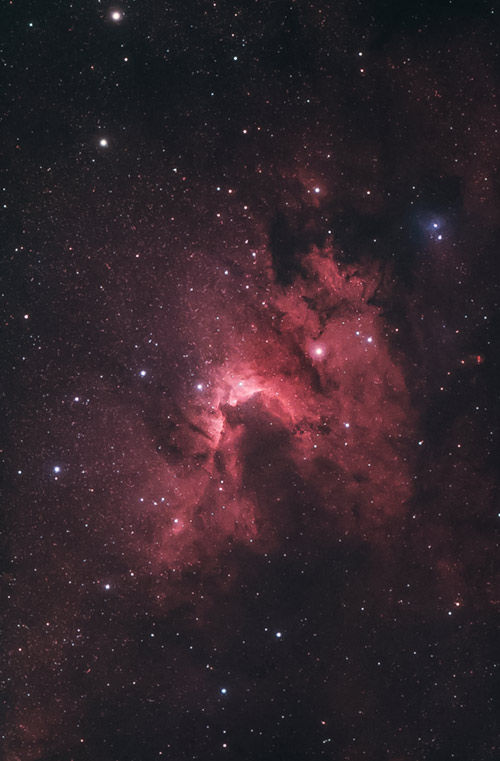 Caldwell 9 – The Cave Nebula in Cepheus.

The Cave Nebula is a fascinating deep-sky object, and a satisfying astrophotography target for backyard imagers. In this article, I will explain what the Cave Nebula is, where to find it, and how I photographed it from my backyard.

Sh2-155 was first noted in the Sharpless catalog in 1959 as a “galactic emission nebula” in the Cepheus molecular cloud. The common name “Cave Nebula” was popularized by Patrick Moore, likely due to photographic images that show this nebula’s curved arc of emission nebulosity resembling the mouth of a cave.

If you are using a computerized GoTo telescope mount such as the Sky-Watcher EQ6-R Pro, you can simply punch in Caldwell 9 into the SynScan hand controller (assuming you are well polar and star-aligned). 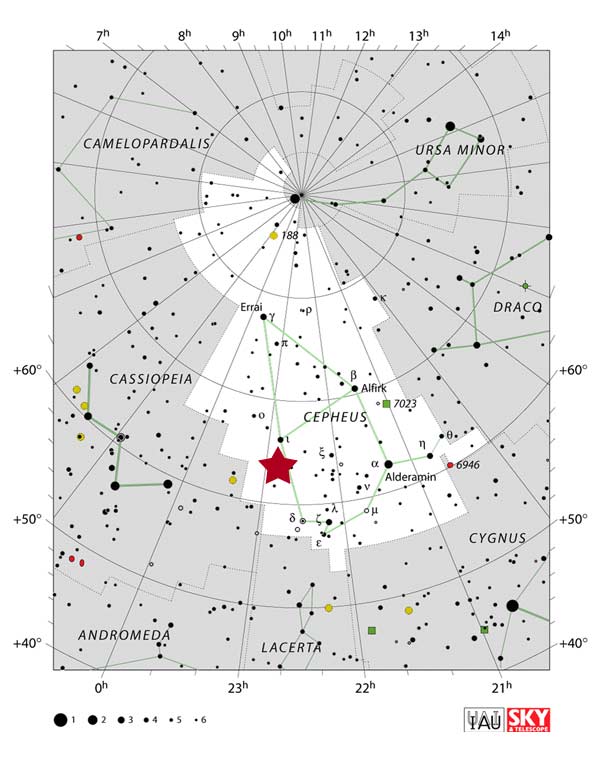 The star marks the location of the Cave Nebula in the constellation Cepheus. (Sky and Telescope).

The “Caldwell Cave” is a bright H II emission nebula that curves around in an arc, resembling the mouth of a cave. The nebula is part of a much larger Cepheus B molecular cloud, containing hot, young stars that illuminate and ionize hydrogen gas.

Although the Cave Nebula may appear bright when photographed using a dedicated astronomy camera, it is a very dim and difficult object to observe visually. The use of a stargazing app on your smartphone may help make the process of locating the Cave Nebula easier.

To learn more about Caldwell 9 (the Cave Nebula), and other fascinating Caldwell Objects, consider reading the following book by Stephen James O/Meara. 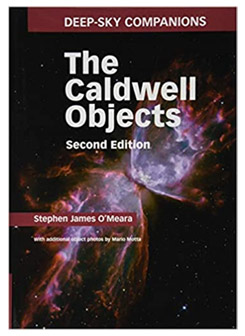 Cepheus is a northern hemisphere constellation, named after the mythical King Cepheus of Aethiopia. Cepheus was cataloged by the Greek astronomer Ptolemy in the 2nd century. Notable highlights of the Cepheus constellation include the Garnet Star, the Wizard Nebula, and the Iris Nebula to name a few.

Cepheus spans 588 square degrees across the night sky and is neighbor to Cassiopeia and Cygnus, among others.  The brightest star in Cepheus is a white class A star, Alderamin (Alpha Cephei). From my latitude at 43 degrees north in Canada, Alderamin never sets below the horizon. 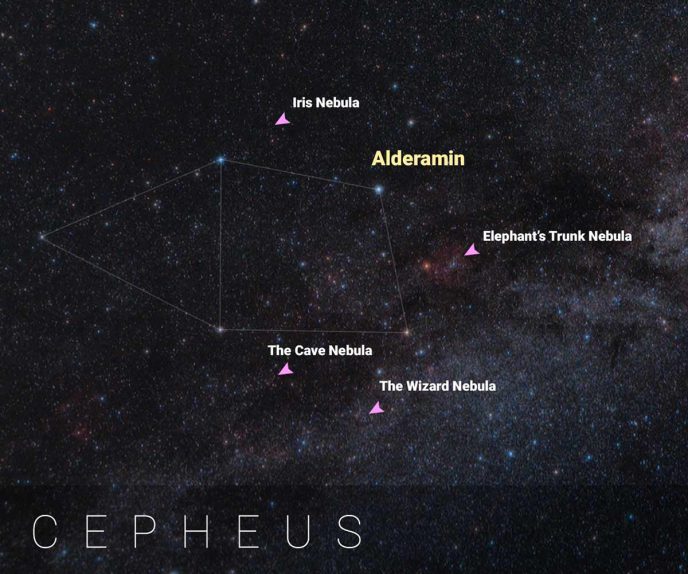 Some of the spectacular deep sky objects in Cepheus.

The photo of the constellation Cepheus above was captured under the dark skies of the Cherry Springs Star Party in 2018 using a Rokinon 14mm F/2.8 camera lens. The intended subject for this photo was the Summer Triangle, but thanks to the ultra-wide field of view this lens provides, I was able to crop the section that included Cepheus.

I plan to photograph this constellation once more, this time using a focal length (24mm) that frames up Cepheus for a closer look. A camera lens can be a great way to photograph objects in the night sky at a lower magnification than you would typically get with a telescope.

In the following video, you will get a better understanding of the equipment used for my image. The video highlights a particularly useful accessory for nights when dew is a problem. The Pegasus Astro Dewmaster is a dew heater controller that provides valuable information such as the current temperature and humidity level in real-time on the LCD display screen.

Photographing the Cave Nebula for the first time with my telescope.

The image of the Cave Nebula above was captured from my Bortle Scale Class 7 backyard using a small refractor telescope, and a color camera (ZWO ASI294MC Pro). The image consists of 74 x 5-minute exposures, for a grand total of 6 hours and 15 minutes of integrated exposure time. 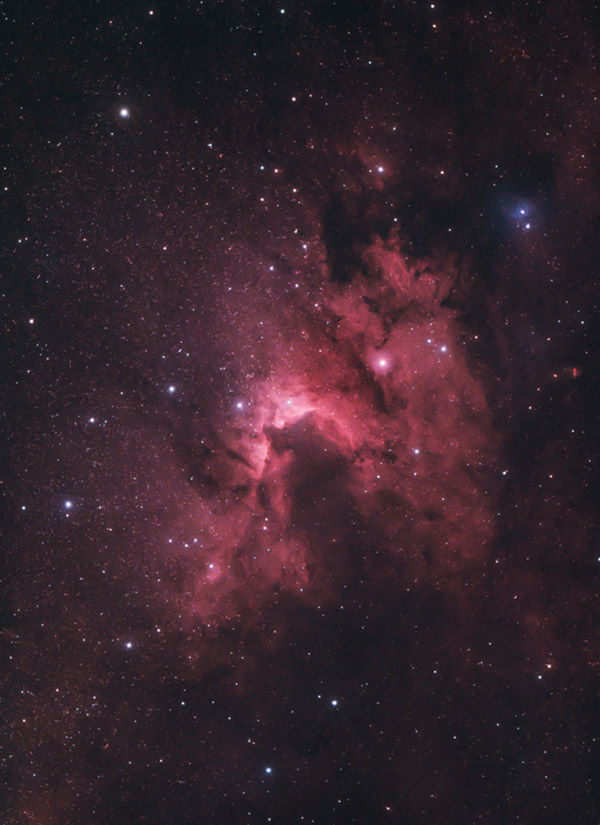 6+ Hours of Total Exposure Time on the Cave Nebula in One-Shot-Color.

Overall, I am quite happy with my result on this challenging target. Using my one-shot-color camera and a duo-narrowband filter, I found it difficult to achieve the cool blue colors of some of my inspiration images. To correct this (and capture natural-looking stars), I must collect exposures in broadband RGB light and apply it to my existing image.

I may try to capture the Cave Nebula once more using the Optolong L-eXtreme filter, rather than the L-eNhance to see if the individual exposure quality improves. Nonetheless, I think this is a pretty remarkable image considering my imaging conditions and the astrophotography equipment used. 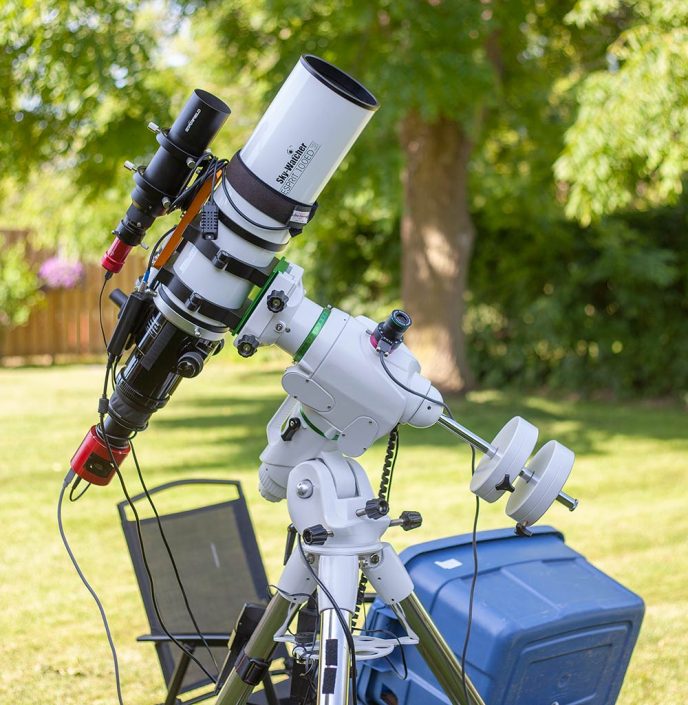 The camera and telescope equipment used for the shot above.

A dual bandpass filter was used in front of the camera sensor, the Optolong L-eNhance. This narrowband filter isolates specific emission lines of many deep-sky objects, specifically the hydrogen alpha and oxygen III wavelengths.

To calibrate the image, I collected dark frames, as well as flat frames to help remove dust spots and vignetting. The images were stacked using DeepSkyStacker to improve the signal-to-noise ratio, and the resulting image was then processed in Adobe Photoshop (See my processing tutorial video) to pull the faint details and highlights of the Cave Nebula forward.

I use narrowband filters to help isolate the wavelengths of light associated with the gases in this nebula and record a detailed image. In terms of astrophotography, this nebula benefits from hydrogen, oxygen, and sulfur filters that collect light in a specific part of the visible spectrum at a time.

In the video, I chose to use a duo-narrowband filter that utilizes the convenience of the practicability of my color astronomy camera. The STC Astro Duo-Narrowband filter allows light emitted from regions of hydrogen (H-alpha) and oxygen (OIII) to pass through and reach my camera sensor.

The resulting data captured using this method is remarkably easy to process and produce a final color image. I later used the Optolong L-eNhance filter on the Cave Nebula, and the resulting data was very similar to the STC images. The difference this time was that I captured much more exposure time (over 6 hours), over the course of several nights in the backyard. 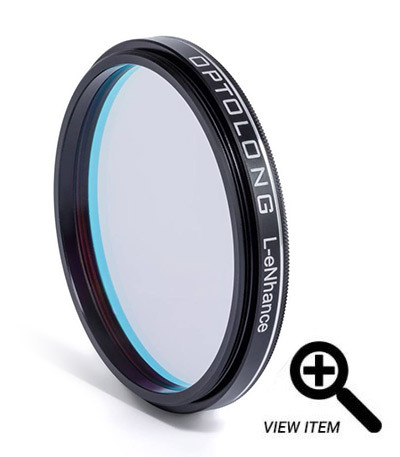 I find it interesting to look at the individual RGB (Red, Green, Blue) color channels of an image using particular filters. For this object, you can clearly see that there is a much stronger signal in the red channel over the others. This is typical of most nebulae in the night sky, as it indicates regions of H II gas.

The Optolong L-eNhance filter is an excellent choice if you shoot with a color camera in heavy light pollution. The light emitted from your subject is recorded on the camera sensor, with little else (light pollution) getting through. 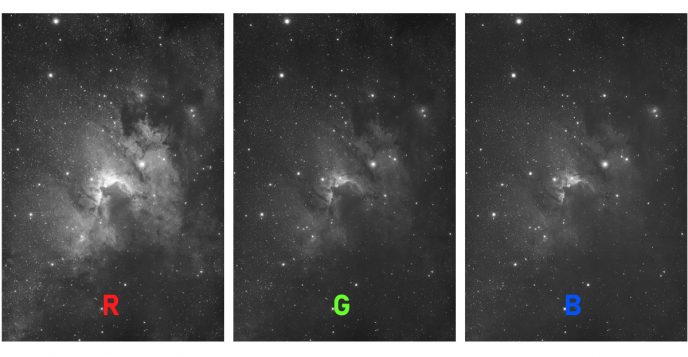 The RGB channels of my Cave Nebula image.

Equipment Used for my Shot

Below, you’ll find an equipment profile of the exact telescope setup I used to photograph the Cave Nebula from my backyard. The equatorial telescope mount is the most critical piece of the puzzle, as this allows me to compensate for the apparent rotation of the night sky, and “freeze” deep sky objects in place for a long exposure image.

The setup shown below is considered to be a wide-field deep-sky setup, and is great for photographing large, colorful nebulae in the night sky. It utilizes an autoguiding system powered by a ZWO ASI290mm Mini guide camera allows software on my computer to make small adjustments to my equatorial mount’s tracking movements.

I am a big fan of wide-field apochromatic refractor telescopes for astrophotography. The Sky-Watcher Esprit 100 ED APO seen in the photo above is a superb optical instrument that consistently delivers impressive results with my color camera.

When attempting to photograph a new astrophotography subject, I find it useful to browse results taken by others for inspiration. AstroBin is a great place to look at images captured using specific equipment.

The image below was captured by Chuck Ayoub of the “Chuck’s Astrophotography” YouTube channel. This image showcases the true depth of this nebula and the contrasting dark nebula regions. 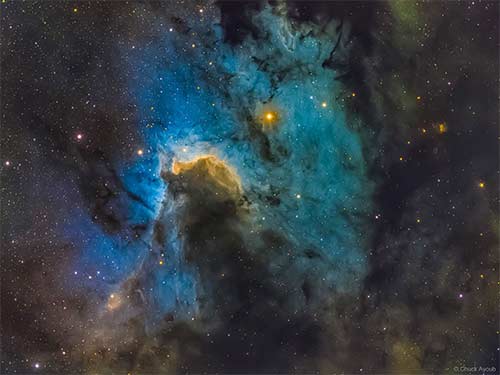 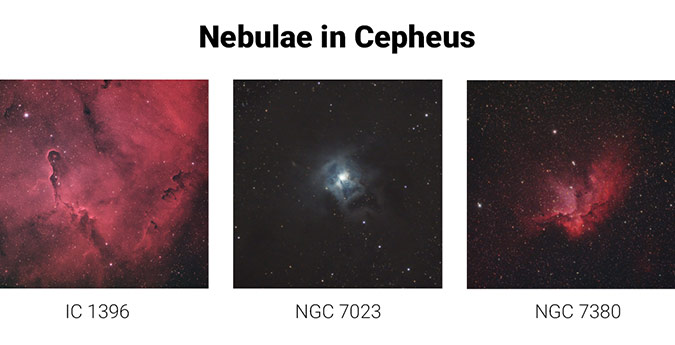 I hope that this article has inspired you to start capturing your own images of deep-sky objects in space. If are looking to get started in astrophotography, please see my beginner’s guide, and be sure to subscribe to my newsletter.