Nearly every aspiring backyard astronomer enters the world of astrophotography through moon photography. The moon is the perfect target for beginners as its detailed surface begs to be captured as it travels along the ecliptic path.

The best part about moon photography is the variety of creative compositions possible, whether it be a landscape photo or a high magnification close-up through a telescope.

Photographing the moon often leads to other forms of photography including planetary and deep-sky astrophotography. Mastering the art of capturing objects in the night sky does not happen overnight. It may become a lifelong passion and learning experience as it has for me.

The moon was the very first object in space that I personally photographed, and I am still as captivated by it today as I was then. 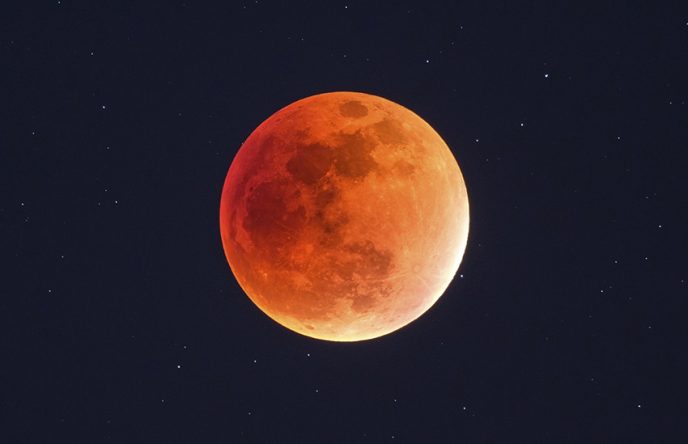 I captured the total lunar eclipse that occurred on September 27th, 2015.

Yes, it’s true, these days I spend more time avoiding the moon than I do chasing it. I am usually out photographing deep-sky objects with my camera and telescope during the new moon phase.  However, moon photography allows me to avoid much of the specialized astrophotography equipment involved with deep sky imaging, and focus on the basics of night photography.

A landscape photography image (nightscape) that includes the moon can make for an incredibly narrative scene. 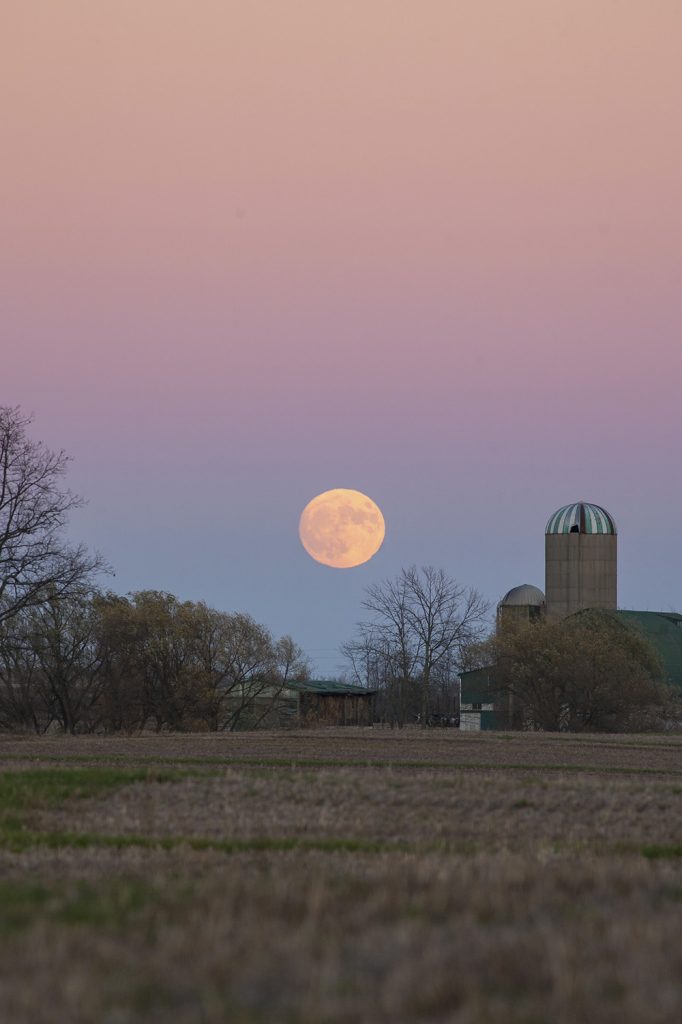 The supermoon rising in November 2016

The moon makes everyone take notice. It is the one astronomical element that even the most focused Earth dweller can’t ignore. A full moon is universally recognized and admired, and that is a beautiful thing. Whether the event is labeled a Supermoon a Harvest Moon or anything in between, this glowing rock is a constant reminder of our place within the solar system.

I have been photographing Earth’s natural satellite in various orientations for the past 7 years, and have some tips to share with aspiring night sky photographers. The tutorial below shares tips and tricks for capturing a beautiful shot of your own using a digital camera and a tripod. If you own a telescope, it’s possible to take even better shots through the eyepiece. 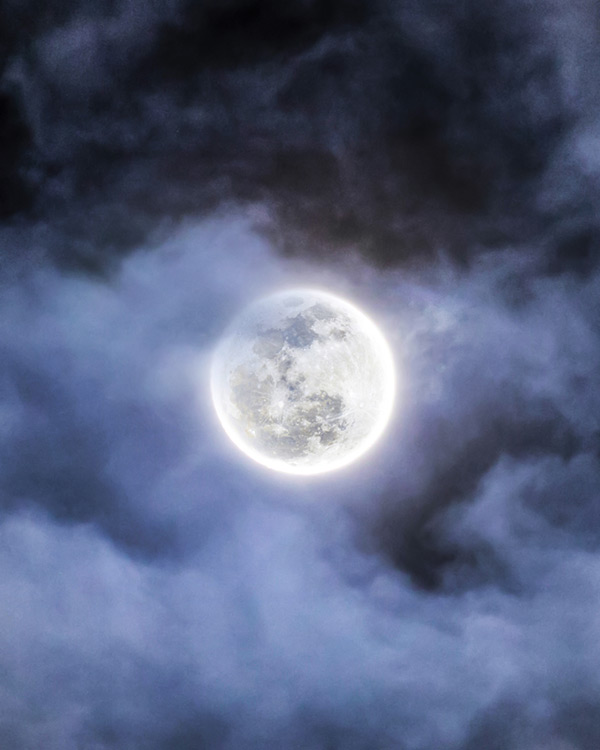 How to take pictures of the moon: Beginners Guide

Moon Photography: A Gallery of Landscape and Close-Up Images

On top of being an amateur astrophotographer, I like to consider myself somewhat of a nature and landscape photographer as well.

I am passionate about our natural environment and the plants and animals that call this planet home. You’ll notice that I like to combine the night sky in my landscape photos.

Now that I’ve explained why I love moon photography so much, let’s have a look at some of my favorite shots that I have taken throughout the years. 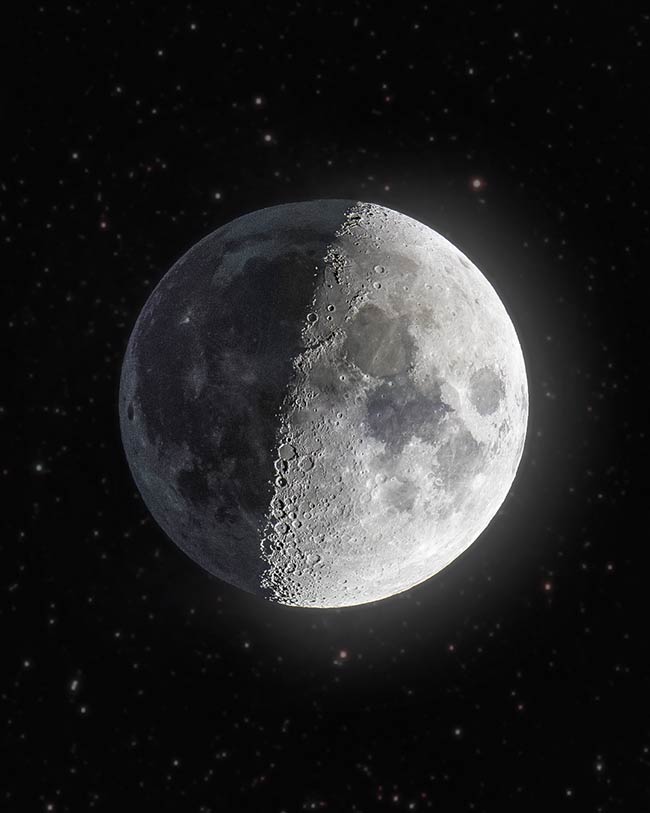 To produce this image of the moon in its first-quarter phase, I blended two exposures together to create a high-dynamic-range image.

I used a short exposure image to capture the brightly lit portion of the moon (about 1/500 of a second) and a longer exposure to reveal the dark half (about 3-seconds).

The camera and telescope used were tracking the apparent motion of the night sky on an equatorial telescope mount, so the moon remained still during the pictures. 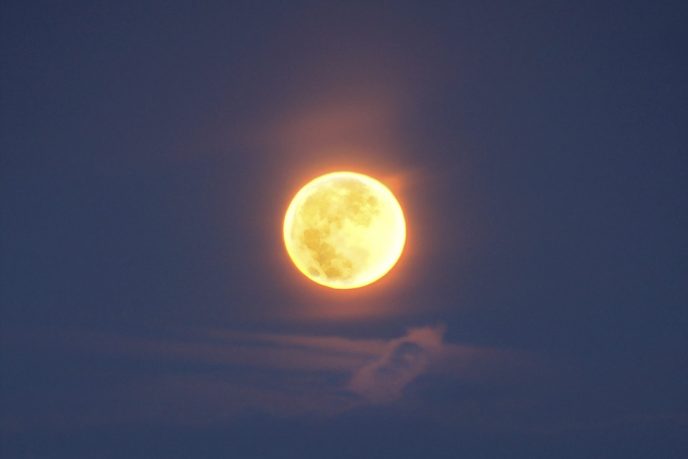 This shot was taken using a Canon Rebel Xsi with an 18-200mm lens (@ 200mm) on a tripod. This is an old photo taken back in April of 2011. I remember pulling over on the side of the road in Niagara-on-the-lake to capture it. I often get in the car and drive to a location with a clear view of the horizon on the night of the full moon.

It is important to use a shutter speed fast enough to freeze the motion of the moon when using a stationary tripod with a telephoto lens. A 200mm telephoto lens is quite forgiving, but a camera lens with a focal length of 400mm or more will increase the chances of a blurry shot. After all, the moon is a moving target!

Full Moon through a Telescope: 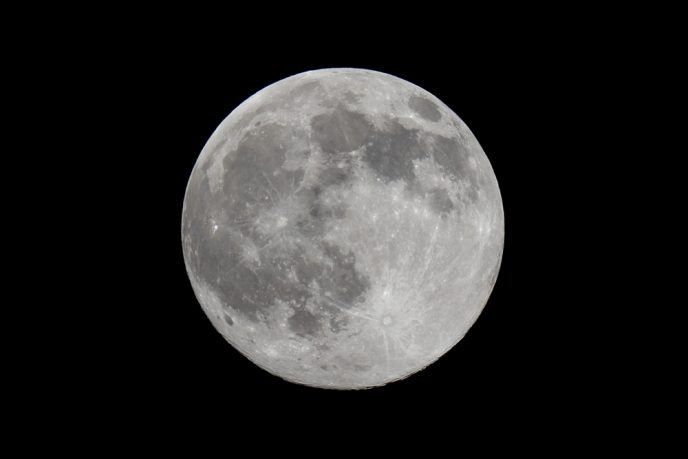 This is what the full moon looks like through a telescope!  In the early days, I would place my Canon Powershot digital camera into the 32mm eyepiece of my Dobsonian telescope to photograph the moon. This is called eyepiece projection astrophotography.

Now, I have the adapters to connect my DSLR camera directly to the telescope for prime-focus imaging. This photo was taken using the prime focus method with a Canon 70D.

Telescopes are the ultimate prime telephoto lenses. They offer a long focal length and the perfect focal ratio for a crisp shot of the moon, that is what telescopes were designed for. With this long focal length also comes increased shake and weight. 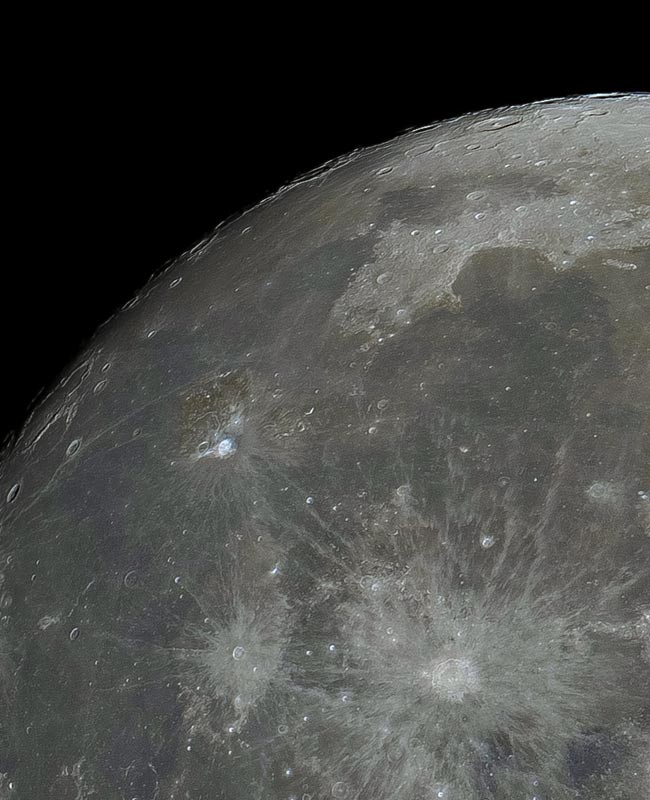 A close-up photo of the Moon’s surface through a telescope.

Most telescopes are far too heavy for a traditional tripod. A tracking equatorial mount is best, as it will move with the moon and allow you to shoot longer exposures.

Supermoon Rising over a Farmers Field: 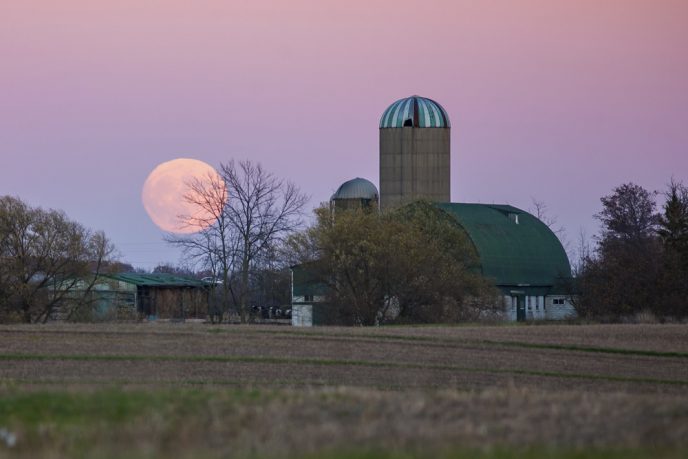 I was extremely happy with the way this landscape scene came together. On the night of the “Supermoon” in November 2016, I once again got in the car and drove around looking for an interesting location to capture the moonrise. At the same time I spotted the beautiful orange disc of the moon on the horizon, I noticed a photogenic farm in Pelham, Ontario.  I set up my Canon 5D and 300mm F/4 lens on a tripod for this photo.

The moon appears “wavy” when it is this low to the horizon. This is because we are seeing the moon through a lot of atmospheric disturbances from the Earth.  The moon will appear sharper and lose its orange/pink color as it rises higher and higher into the night sky. If you’ve ever seen a photo of the moon breaking the horizon with razor-sharp lunar surface details, it has been photoshopped! 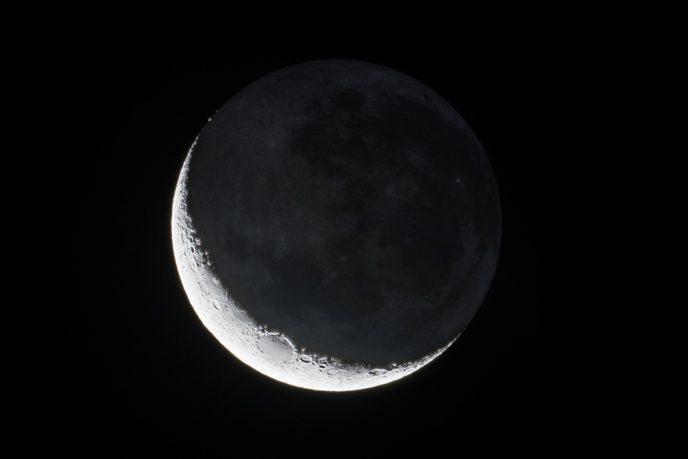 Here is another example of the kind of photo you can expect to capture with a DSLR camera connected directly to a telescope. In this photo, you can clearly see the Earthshine visible on the thin waxing crescent moon. The photo above combines 2 separate exposures to expose the detail on the surface of the moon, as well as show capture the faint glow on the unlit portion of the waxing crescent moon.

You may have noticed the moon looking this way in the night sky, usually during the first few nights after the new moon phase. Light is reflected off of the Earth onto the unlit area of the moon, allowing you to see the entire disc of the moon. For a look at the moon in this phase, view it in real-time in my video:  AstroBackyard – A Night in my Backyard 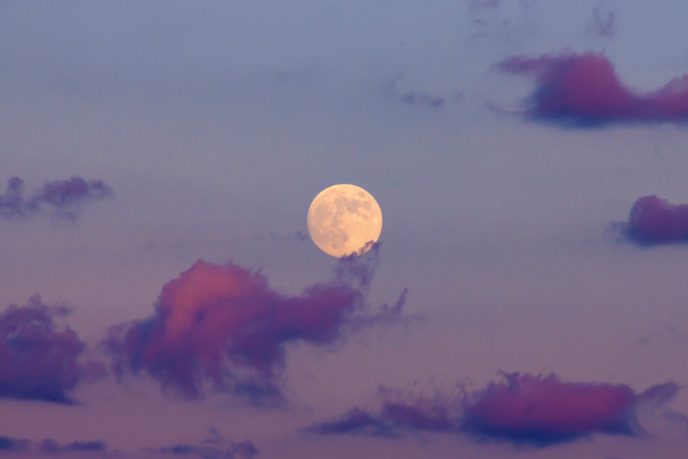 There is nothing quite like a full moon appearing from behind scattered clouds.  The added weather conditions can add to a more memorable landscape scene. The full moon photo above was shot with a Canon Xsi and 18-200mm lens on a tripod in Jordan, Ontario. As with most of my landscape moon photography images, this was a combination of exposures taken at different lengths to show details on the surface of the moon. 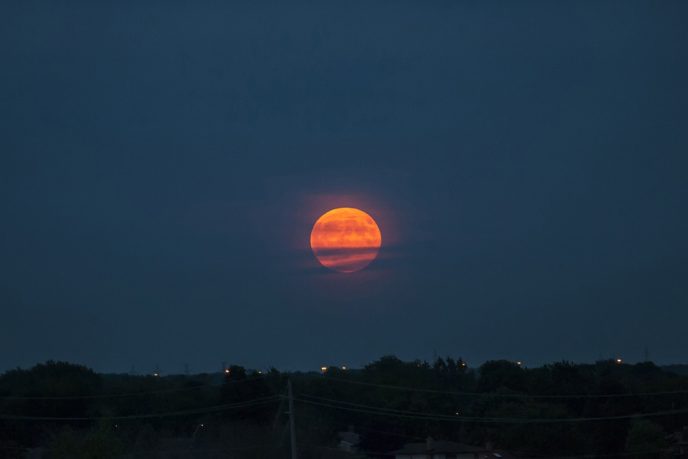 On September 16th I set out to shoot the Harvest Moon with doubts about whether I would be able to view the event or not. The sky was almost completely overcast, yet I preceded to shoot a video about the moon photoshoot anyway. I was rewarded with my perseverance with a stunning orange harvest moon rising over the city of St. Catharines.  This dramatic scene was shot using a Canon 5D DSLR with a Canon 300mm F/4 lens hand-held.

Shooting the moon through a 300mm lens hand-held is tricky, especially in low-light conditions. Bumping up the ISO, and using a wider aperture on your digital camera will give you the best chance at a sharp shot. The moon will always appear larger than normal when it is low on the horizon, this phenomenon is known as the Moon Illusion.

A thin waxing crescent moon over the trees: 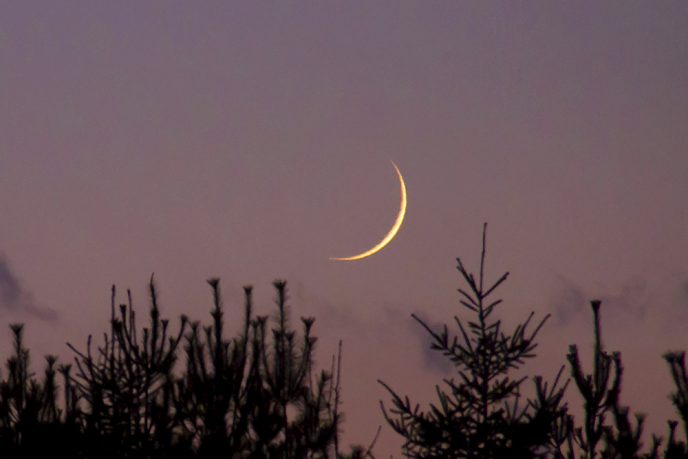 The ultra-thin crescent moon that occurs for the 3 days following the new moon is always a real treat to observe and photograph if you can find it! A thin, 1 or 2-day old crescent moon will get easier to spot as it drops deeper into the horizon, as the sky becomes darker.

The crescent moon against a purple sky in the photo above was captured at the RASC Niagara Centre Observatory in Wellandport, Ontario. This is another photo taken using a Canon 18-200mm zoom lens at 200mm. 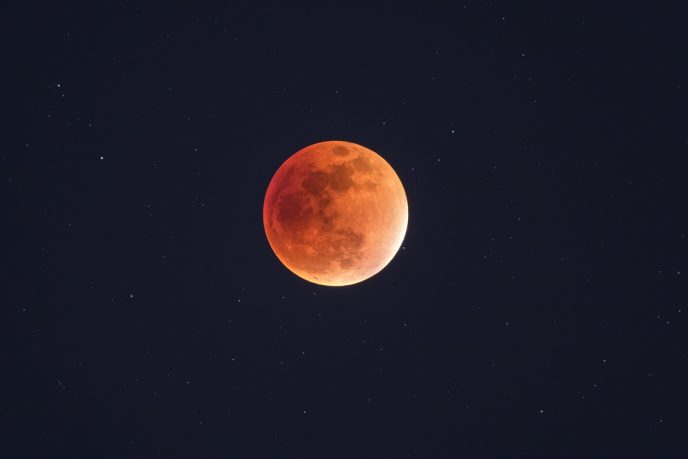 On September 27h, 2015, the Northern Hemisphere experienced an incredible total lunar eclipse. A widely publicized event such as this offers up the perfect chance to try moon photography for yourself.

This total lunar eclipse was extra special due to the fact that it was labeled a Supermoon or super Blood Moon eclipse. I was lucky enough to have clear skies in my backyard that night and attached a Canon 70D to my telescope to record the event.

The most interesting aspect of this photo is the inclusion of stars in the background sky. This phenomenon was easily captured due to the low surface brightness of the eclipsed moon.