The Sunflower Galaxy (M63) is a spiral galaxy located in the constellation Canes Venatici. Also known as NGC 5055, the Sunflower Galaxy is a highly detailed and fascinating astrophotography target that lies roughly 37 million light-years from Earth.

As is the case for many galaxies observed during galaxy season, Messier 63 appears rather small from our vantage point on Earth. The Sunflower Galaxy has an apparent size of 12′.6 × 7′.2, which is a little larger than the Black Eye Galaxy. 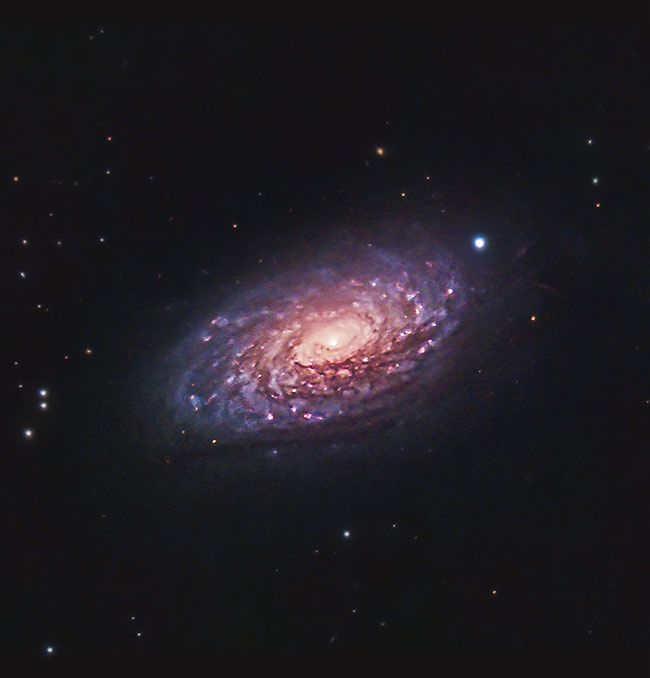 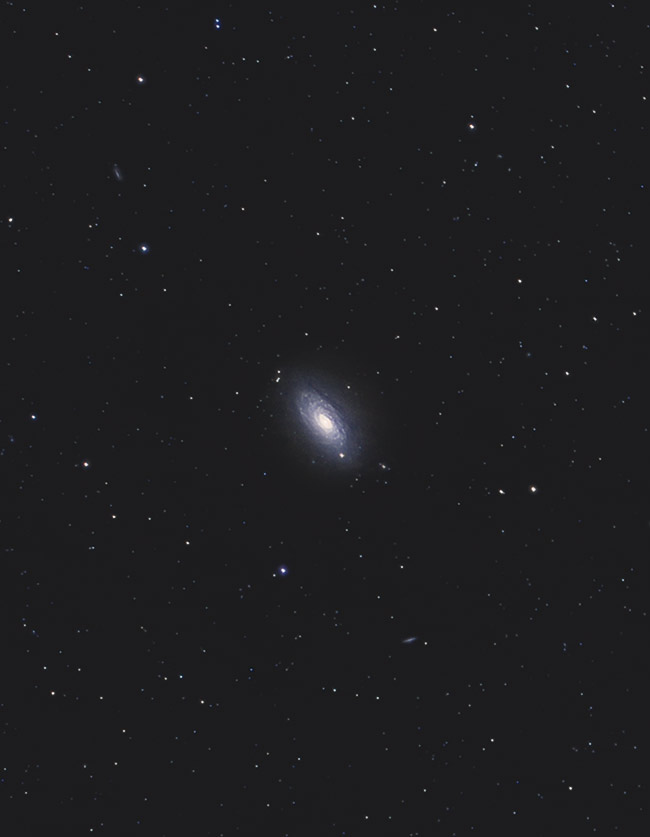 Through a wide field telescope like the 8″ RASA (400mm), M63 appears quite small in the image frame. From our vantage point on Earth, many of the galaxies observable during galaxy season appear small in the night sky.

A telescope with a longer focal length will be able to resolve more details of M63, and pull it in for a closer look. A Schmidt-Cassegrain Telescope (SCT) or Ritchey-Chrétien Telescope is a great option for those that wish to photograph small galaxies at high magnification.

It is possible to observe the Sunflower galaxy with binoculars, but it will appear as a small, hazy patch of light. A small telescope will reveal it to be a galaxy, but the structure and details seen in the image above are not visible.

From mid-northern latitudes, the best time to observe the Sunflower galaxy is in the spring. I often return to M63 in early April to improve upon my photo from the year before.

Photographing galaxies from a light polluted area can be tricky. This is largely due to the fact that galaxies are (for the most part) broad spectrum astrophotography targets.

A mild light pollution filter can effectively reduce the amount of artificial light collected in your images. I have found the Optolong L-Pro filter to be an excellent choice when photographing galaxies like M63.

The Optolong L-Pro Filter is handy when photographing galaxies from the city.

To photograph galaxies like the Sunflower galaxy, you must color light (or signal) in broadband RGB. We are not able to harness the power of narrowband filters that isolate specific light wavelengths the way we do with nebulae.

This means that it can be harder to separate the galaxy from a washed out city sky. Some amateur astrophotographers prefer to shoot broad spectrum targets such as galaxies without using a filter, no matter how light polluted their skies are. This technique requires a healthy amount of exposure time (signal) to work.

Certain galaxies benefit from narrowband imaging, especially if they contain areas rich in hydrogen gas. However, the narrowband details collected will simply enhance the details of your image, as the majority of the signal lies in the broad spectrum wavelengths. The Triangulum Galaxy is a great example of a galaxy that benefits from adding Ha details).