The Flaming Star Nebula in Auriga

The Flaming Star Nebula is lit by the nearby AE Aurigae in the constellation Auriga. Cataloged as IC 405, this glowing emission and reflection nebula lies approximately 1,500 light-years from Earth.

The Flaming Star Nebula is bright enough to be observed and photographed through a small telescope under the right conditions. IC 405 is an exquisite astrophotography target due to its unique composition and combination of colors. 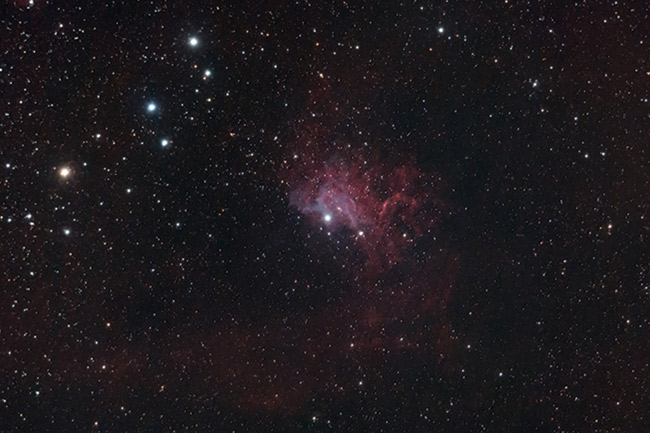 The Flaming Star Nebula captured using a DSLR camera and a small telescope.

The hydrogen emission gas makes up the “flame” of IC 405, while the blue reflection nebula resembles smoke. The Flaming Star Nebula spans about 5 light-years across, with an apparent visual magnitude of +6.

The rippling dust and gas lanes of red and blue are what give the Flaming Star Nebula its name. The intensely bright star AE Aurigae is so hot that it is blue, and emits energetic light that knocks electrons away from the surrounding gas. 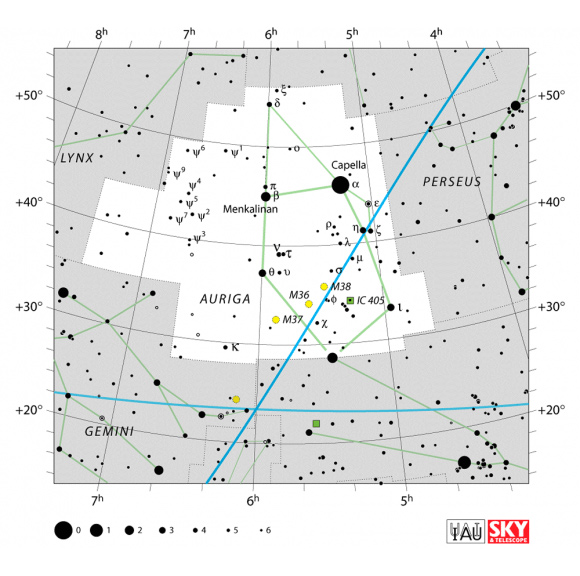 A star map of the constellation Auriga. Sky and Telescope and the IAU.

Another nebula lies very close to the Flaming Star Nebula, IC 410 (The Tadpoles). Using a DSLR camera and wide-field refractor telescope, we can capture both nebulae at once.

Here is an image of the Flaming Star Nebula captured using a Canon EOS Ra mirrorless camera. This image features the nearby Tadpoles Nebula, as well as a number of other deep-sky objects in the surrounding area.

From our vantage point on Earth, open star clusters M36 and M36 are not far away from the Flaming Star Nebula in Auriga. A camera lens with a shorter focal length (compared to an astronomical telescope) can capture the entire constellation of Auriga in a single shot, including IC 405, IC 410, and both star clusters.

For this image, exposure was 3-minutes long, using ISO 1600. The telescope used (William Optics Redcat 51) sits at a fixed aperture of F/4.9. 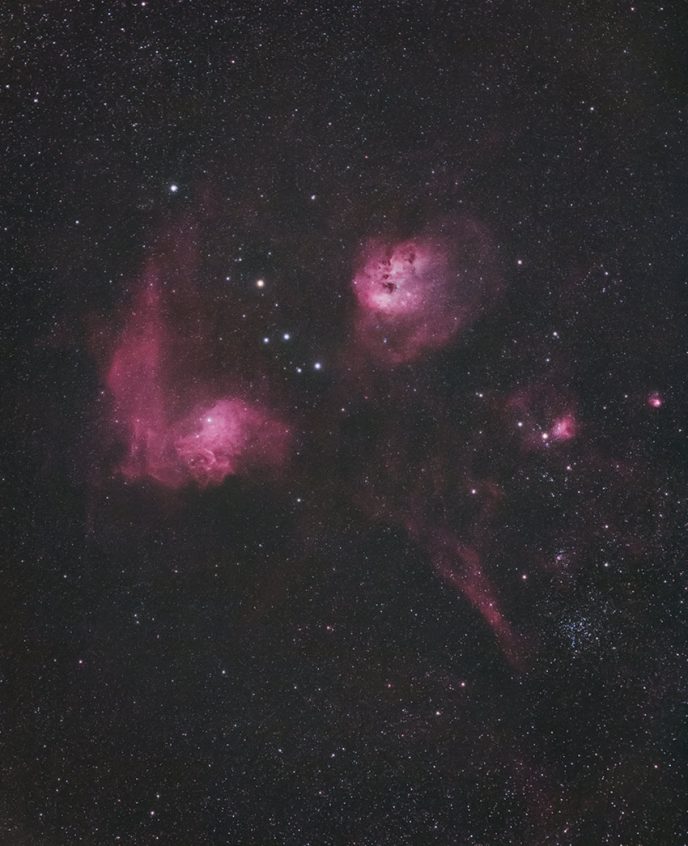 The telescope used has a focal length of 250mm, which should give you a good idea of the image scale to expect using a similar system. The Canon EOS Ra is a full-frame astrophotography camera, so expect to see a significant crop (1.6X) at this focal length when using an APS-C sized sensor camera such as the Canon T7i.

50 x 180-second exposures were stacked using DeepSkyStacker to create a final image with an improved signal-to-noise ratio. Dark calibration frames were used to reduce noise in the final integration.

Because a lightweight camera and small refractor were used, I was able to use a portable star tracker to compensate for the apparent movement of the night sky.

The Sky-Watcher Star Adventurer is a handy camera mount for astrophotography that can help you take long exposure images of the night sky without star trailing.