How to See Saturn Through a Telescope

Yes, you can use a backyard telescope to see Saturn! Seeing the ringed planet through a telescope eyepiece is one of the most exciting moments for any amateur astronomer.

Related Video: Taking a Picture of Saturn Through my Telescope

It is not uncommon to hear many astronomy enthusiasts state that seeing Saturn through a telescope was the reason they became fascinated in space for life.

Seeing Saturn through a backyard telescope is an experience that everyone on Earth should be able to enjoy at least once in their lifetime.

You won’t see a NASA quality image of Saturn using a backyard telescope, but I think you may be surprised at how satisfying a “real-time” view of this planet is.

I first viewed the planet Saturn with a 4.5″ Dobsonian telescope from my backyard about 10 years ago. This affordable telescope had enough power and magnification to see Saturns rings, in all their glory.

It is said that any small telescope is capable of viewing Saturn’s rings at 25X magnification. I suggest using a 15mm eyepiece through a Dobsonian telescope (here is the one I own and recommend) for the best chances of success.

In this article, I’ll explain how you can see Saturn through a telescope yourself, and what to expect. 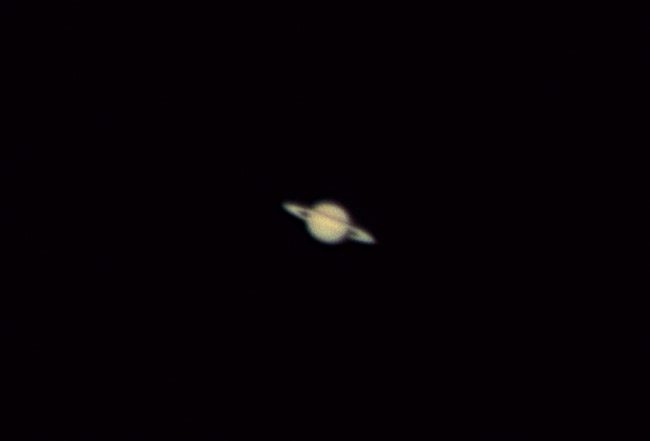 This is what Saturn looked like the first time I saw it through a telescope.

Saturn is a massive gas giant with an average radius of about nine times that of the Earth. It is the 6th planet from the Sun in our Solar System, and the second-largest planet overall.

The most famous feature of this planet is, of course, its beautiful ring system. Saturns rings are mostly comprised of ice particles, along with rocky interstellar debris and dust.

Saturn has over 80 known moons, and 53 of them are officially named. Titan is Saturn’s largest moon. Astronomers have discovered that Titan has a substantial atmosphere. It is the second-largest moon in the entire solar system.

For more information, check out Universe Today’s roundup of interesting facts about Saturn.

How to Find Saturn in the Night Sky

The position of the planet Saturn in the night sky changes over time. It is orbiting the Sun just as Earth is, except that it takes Saturn 29-years (Earth years, of course), to complete its orbital period around the Sun.

The position of Saturn in your night sky will also depend on your location on Earth. Saturn is not always visible to everyone on Earth, because sometimes it lies to close to the Sun from our vantage point on Earth to view at night.

To find the current location of Saturn, I suggest using an astronomy app on your mobile phone with a planetarium simulator. This will show you exactly where to look for Saturn from your location. 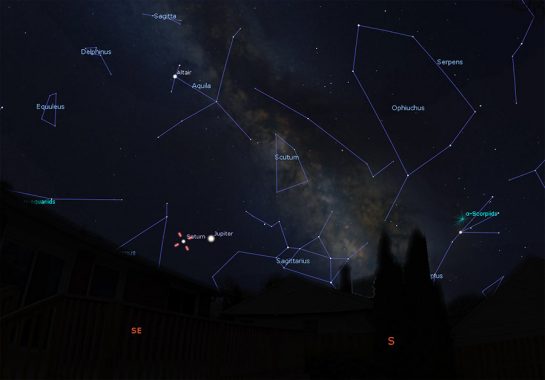 The Stellarium planetarium software will show you where and when to find Saturn from your location.

At the time of writing, Saturn rises early in the morning from my latitude on Earth. By 4 am, it has reached a high enough apparent altitude to comfortable view Saturn through a telescope.

In general, the gas giant planets Saturn, and Jupiter are quite bright and easy to identify in the night sky. This is helpful when trying to locate Saturn from your backyard.

They may look like “bright stars” to the unaided eye, but looking through a telescope will reveal that they are in fact planets.

Most of the variations in magnitude are due to the inclination of the Saturns rings relative to the Sun and Earth.

How Big Does Saturn Look Through a Telescope?

In its most favorable oppositions, the disc of Saturn is about 21 arcseconds in diameter. When you include the size of Saturns rings, the system grows to 2.25 times as wide as the disc. For comparison, it never appears larger than the Planet Jupiter does at opposition.

I captured the photograph of Saturn shown below through my telescope eyepiece, using a point-and-shoot digital camera. This technique is called eyepiece projection astrophotography. Be sure to check out my tips for photographing planets. 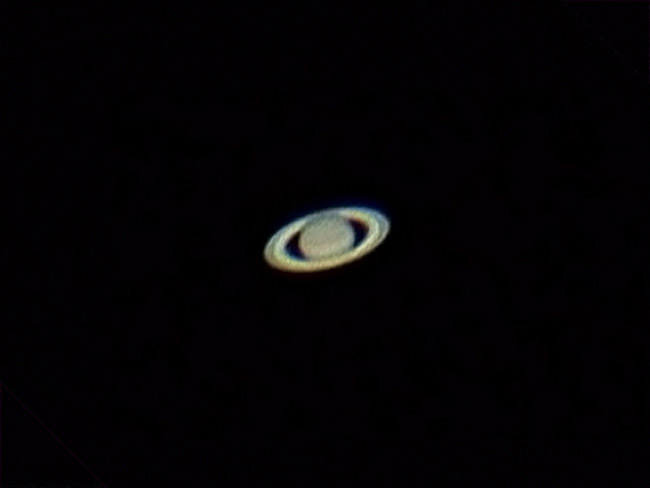 Saturn, as it looks through my Dobsonian telescope with a 2X Barlow lens attached.

The photo below is a more recent picture of Saturn I took through my Celestron Edge HD 11 telescope. This picture was created using a monochrome camera and RGB filters. 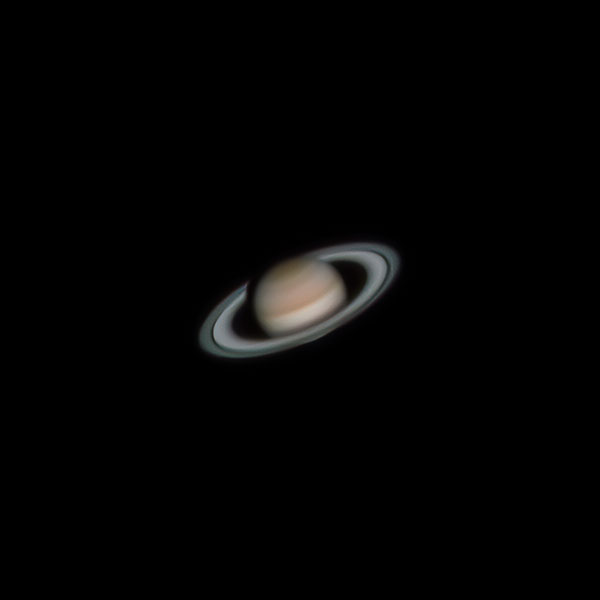 The planet Saturn captured through an 11″ Schmidt-Cassegrain Telescope.

In terms of objects in the night sky, planets are very small and will require optical devices capable of producing high-magnification views. You can certainly enjoy seeing Saturn with your naked eye, but it will appear as a pale, bright star.

The size of the telescope and the eyepiece used will determine how Saturn will look for you. Below, is an illustration shared by Sky & Telescope showing the differences in view from a 4″ aperture telescope, and an 8″ aperture. 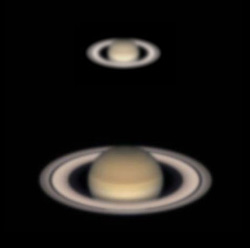 The apparent size of Saturn through a 4″ telescope (top) and 8″ telescope (bottom). Sky & Telescope.

You might think that increasing the magnifying power of your telescope is the answer to seeing the Planet in detail, but this quickly turns into a blurry image as you begin to experience the effects of astronomical seeing.

If you are looking for a telescope that will provide you with impressive views of Saturn, I suggest the Apertura AD8. This is an affordable Dobsonian telescope with enough aperture to see the planets and other incredible celestial objects.

This telescope comes with 2 Plossl eyepieces (9mm and 30mm). You can double the magnification of these telescope eyepieces with a 2X Barlow lens. 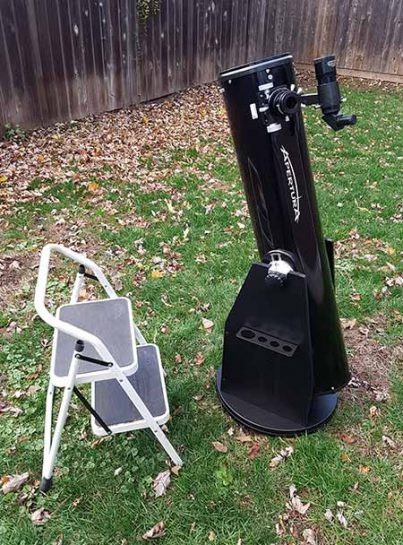 What Can you See?

The level of detail you will see on the planet Saturn will depend on the size and quality of the optics you use. For example, a low-power pair of binoculars will show that Saturn is not just a bright star, and may even display that the disc appears to have “ears”.

A telescope with a large aperture, such as a 12″ Dobsonian will show incredible details on the surface of the planet, including the black Cassini Division between the A and B rings.

Saturn’s rings give it a 3D appearance, more so than any other object you observe through a telescope. The shadows of the rings against the disc of the planet make it appear as a sphere, rather than a flat disc.

You’ll also notice that the edges of Saturn appear darker than the center (limb-darkened). Saturn looks like a pale yellow marble, that casts a noticeable shadow on to the rings.

From our vantage point on Earth, Saturn’s axis tilts over time. This means that our view of Saturn changes each year, as we see the rings on a slightly different angle. Saturn has an axial tilt of 27 degrees, and the more visible rings are orbiting the planets equator.

You may be able to spot Saturn’s moons through a telescope. There are 6 moons that are big and bright enough to see through an amateur telescope: Titan, Rhea, Dione, Tethys, Enceladus, and Mimas.

The most powerful telescope on Earth (well, orbiting Earth), is the Hubble Space Telescope (HST). This optical instrument has the advantage of orbiting above Earth’s atmosphere and has taken the most incredible images of space Earth has ever seen.
Naturally, the HST has taken time to focus on the planet Saturn several times. Hubble’s Wide Field Camera 3 (WDC2) observed Saturn on June 20, 2019, when the planet made its closest approach to Earth (roughly 845 million miles away).
Don’t expect to see Saturn like this through a telescope on the ground, but enjoy the exquisite detail in the rings and surface of the planet in this stunning Hubble image. 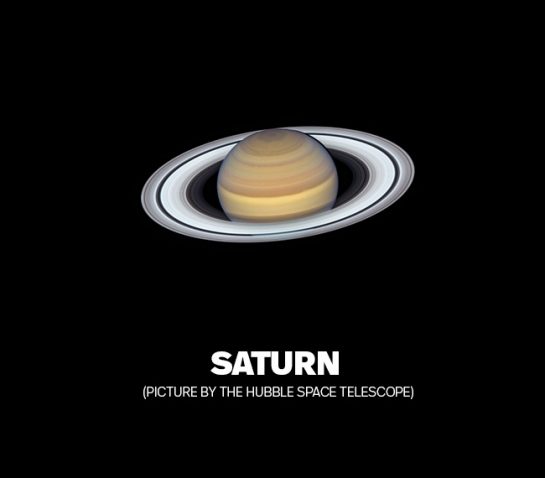 Which Telescope Eyepiece to Use for Planets?

Telescope eyepieces come in countless magnifications and designs. Choosing the right telescope eyepiece for observing planets will depend on your expectations, skill level, and optical instrument.

Generally, a premium telescope eyepiece will last a lifetime, and provide the best possible views through your telescope. Many amateur astronomers consider the Tele Vue brand to be at the top of the list.

Because you want to Saturn to appear as large as possible, you may be tempted to use a high-magnification eyepiece in the 5-10mm range. However, I have found using a medium-range eyepiece such as the Tele Vue 24mm Panoptic with a 2X Barlow lens to be effective. 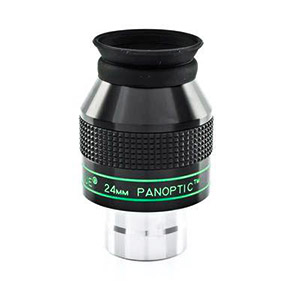 Eyepieces that excel in planetary observations also make great eyepieces for high-magnification views of the moon.

If you’re looking for a planetary telescope eyepiece without using a Barlow lens, stick to models in the 5-10mm range. Eyepieces below 5mm are best suited for refractor telescopes and Schmidt Cassegrains.

For expert help choosing an eyepiece for observing Saturn, have a look at the following guide: Choosing the Right Telescope Eyepiece (OPT).

Good seeing conditions are essential for a good view of Saturn through a telescope. For a detailed forecast of the astronomical weather, I like to use a mobile app called Astrospheric. This provides astronomy-specific forecasts such as transparency and seeing. 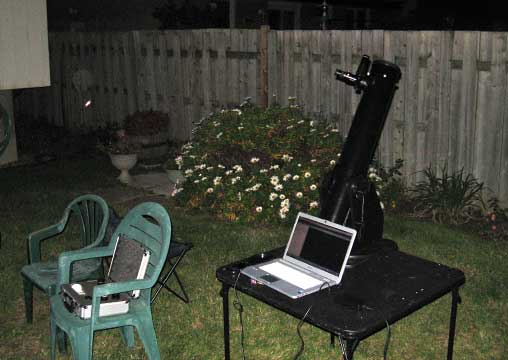 Depending on your telescope height, you might want to put it on a table for a more comfortable viewing experience.

Under good seeing conditions, you should be able to distinguish the Cassini Division between the rings of Saturn with a small telescope (3-4″ aperture). Here are some practical tips you can use to see Saturn through a telescope:

The tips above assume you are using an 8″ telescope on a stationary mount (such as a Dobsonian), and your optics are well collimated, and the observing conditions are adequate.

You suddenly feel a little smaller, and a little more connected to our solar system. I hope that this experience opens the door to a new love for astronomy as it has for me. 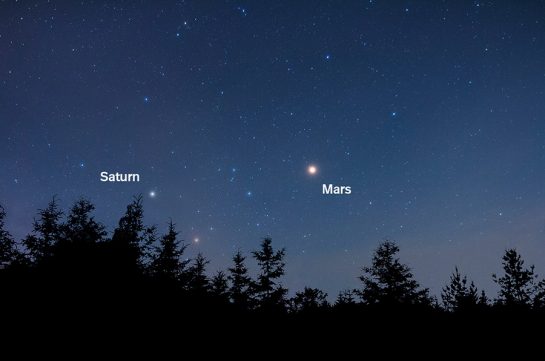 In June 2016, I captured this photo of the planets Saturn and Mars passing through the constellation Scorpius.

In this video, I share a live look at what Saturn actually looks like through a telescope in real-time. Using a telescope with a long focal length can make the image pretty shakey.

However, the best frames from the video can be extracted and stacked in software called AutoStakkert to create a high-resolution image. This is a planetary imaging software specifically designed for taking pictures of Saturn, and the other planets.