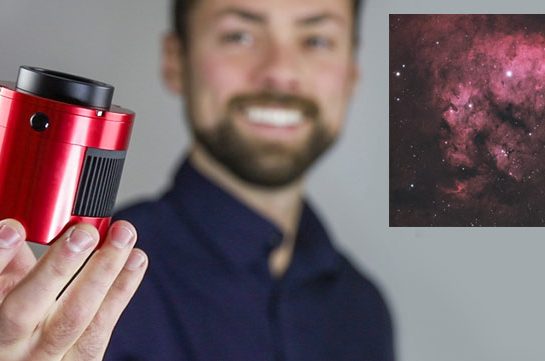 The ZWO ASI533MC Pro is a one-shot-color (OSC) dedicated astronomy camera designed for deep-sky astrophotography. Over the past 8 years, I have had the pleasure of testing many astrophotography cameras, from entry-level DSLRs to cooled, monochrome CCD’s.

The camera you choose for astrophotography will determine the types of subjects in the night sky that you will photograph. In the case of the ZWO ASI533MC Pro, the subjects will likely include deep-sky objects including large nebulae.

ZWO reached out to me directly with an opportunity to test an early version of the ASi533MC Pro. I initially thought it would be strikingly similar to my previous color astronomy camera, but as I spent more time reviewing the data the subtle differences became evident. 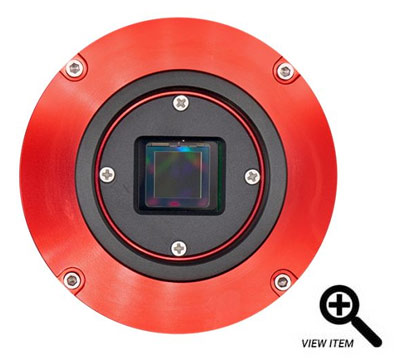 In this article, I will do my best to share real results using this astrophotography camera from my backyard in the city. The images shared on this page were captured using a 100mm refractor (Sky-Watcher Esprit 100 APO) riding on an equatorial telescope mount.

My backyard is classified as a class 6/7 on the Bortle Scale, which is considerably light-polluted. I rely on filters to photograph objects in space from the comfort of my home.

If you find this article useful, please consider signing up for my newsletter to get notified when I share new articles.

The ASI533MC Pro is ZWO’s latest OSC camera, and it’s equipped with a 9MP Sony IMX533 CMOS sensor. This camera sensor is quite different from the one in the ASI294 I am used to. 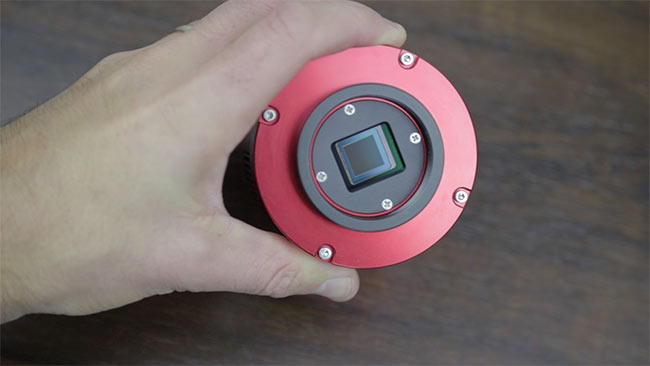 When comparing a dedicated astronomy camera to a DSLR or Mirrorless camera, there are a number of key differences. The biggest one is cooling.

This ZWO ASI533MC Pro has a built-in TEC (thermoelectric cooler) that requires a 12V power source to run. This allows the sensor to reach as much as -35 Celsius below the ambient temperature.

This can dramatically reduce the amount of noise recorded in your images. If you have ever tried to take a long exposure image using a high ISO with your DSLR on a hot summer night, you’ll know why this feature is so important.

Another big difference between a dedicated astronomy camera and a DSLR/Mirrorless system is the back-illuminated CMOS sensor. This design is common in astronomy cameras because it can improve sensitivity and reduce noise.

If you would like to see how I have the camera connected to my telescope and get an inside look at my first run with the ZWO ASI533MC Pro, please watch the following video:

Based on the comments for this video, a lot of people wanted to see a comparison between the ASI533MC Pro and the ASI294MC Pro I was previously using. For the most useful comparison, I will need to shoot the same target (Horsehead Nebula) using the ASI533MC Pro without the APEX 0.65 reducer.

Unfortunately, I have not had another clear night to test this configuration, but the Stellarium sensor view diagrams further down this article should help.

I have put together the following comparison graphic with an overlay of the native field of view you can expect with the 533 sensor. 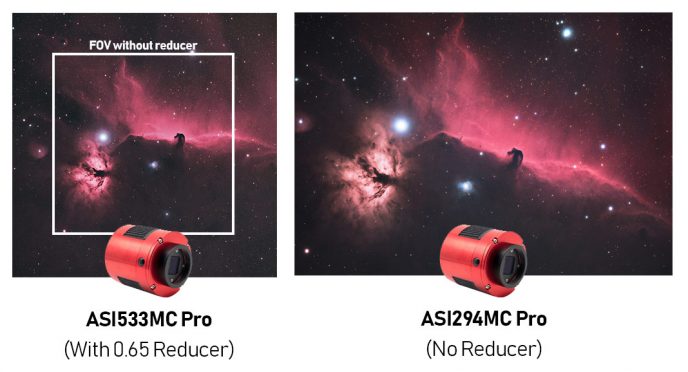 The sensor size and resolution of the 533MC Pro is an attractive choice for amateur astrophotographers that wish to photograph mid-size deep-sky objects with refractors in the 400-600mm range.

One of the key differences between the ASI533MC Pro and the ASI294MC Pro is that there is zero amp glow in the 533. I was very comfortable seeing amp glow in my light frames on the 294, as they were a cinch to remove using calibration frames.

However, the topic of amp glow seems to come up more than I would have expected in the astrophotography community, so it is obviously an issue for some imagers.

I won’t go into detail with all of the specifications for this camera. Partly because you can discover all of these details yourself on the ASI533MC Pro product page, and partly because I am incapable of providing an intelligent description of why 14bit ADC is important.

For convenience, I have included the handy spec breakdown graphic ZWO puts together for all of their CMOS astrophotography cameras. 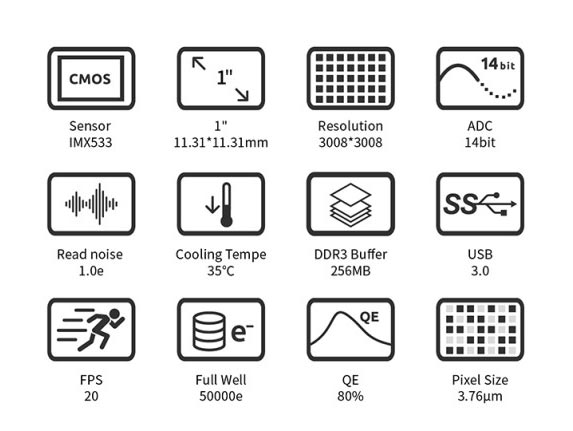 This camera shares some similar qualities to the ASI183MC Pro, with the biggest (noticeable) differences being in resolution, sensor shape, and read noise. ZWO has shared a comparison chart between the ASI183MC (and Mono) and the ASI533MC Pro on their website.

I did not notice an obvious improvement in read noise between the ASI533MC Pro and the ASI294MC Pro, but I did notice that the amp glow was completely gone. I always use dark frame calibration in the stacking process to help create an image with a stronger signal-to-noise ratio (SNR), so the noise present in the individual light frames is not something I pay a lot of attention to.

For my testing, I controlled the camera using Astro Photography Tool (APT). Before connecting the camera using APT, I downloaded the necessary drivers to run the camera on my computer from the ZWO website. This includes the updated ASI ASCOM driver, which was due for an update since the last time I ran through this process.

After connected the camera in APT, I set the Gain and Offset settings to Unity Gain, a setting I have found to work best for my sky conditions and the filters I use most often. 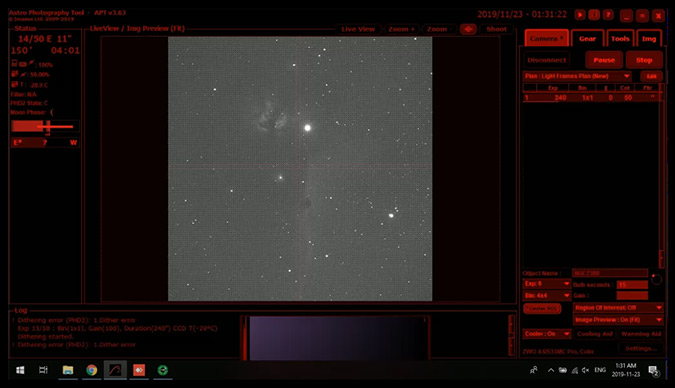 It was strange to see a completely square preview image out of this ZWO camera after using the 4/3″ sensor ASI294MC Pro for so long.

The camera cooled very quickly, and the 256MB DDR3 buffer ensured that my live-view text exposures appeared on screen for framing and focusing. I usually use a 5-second loop when finding and framing my deep-sky target.

With the duo-bandpass filter in place, objects that glow with hydrogen gas jump off the screen in a short exposure. This makes framing your subject much easier if you are not utilizing plate-solving to set up your imaging plan.

The aspects of this camera that I can appreciate and understand are the image scale and resolution. The pixel size of the AS533MC Pro can (in theory) create higher-resolution images of nebulae and galaxies than I was used to with the ASI294MC Pro.

The field of view using my refractors has changed significantly as well. Take a look at the image comparisons created in Stellarium with the sensor sizes of the 533 and 294 entered in.

Here is a look at the native FOV you can expect using the ZWO ASI533MC Pro with a Sky-Watcher Esprit 100 APO refractor: 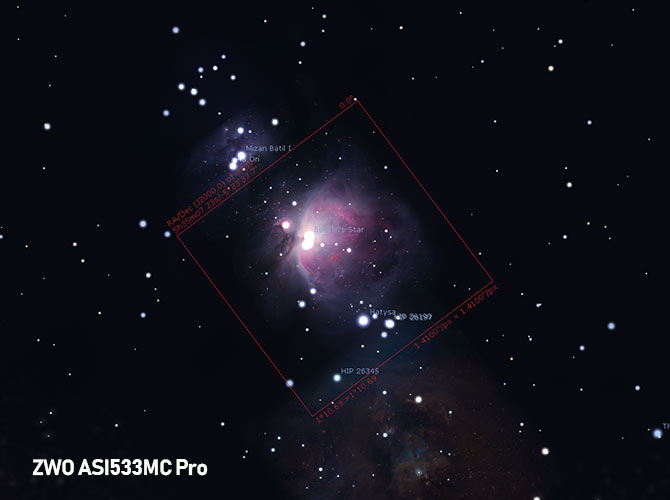 The field of view using the ASI533 with a 550mm focal length refractor. 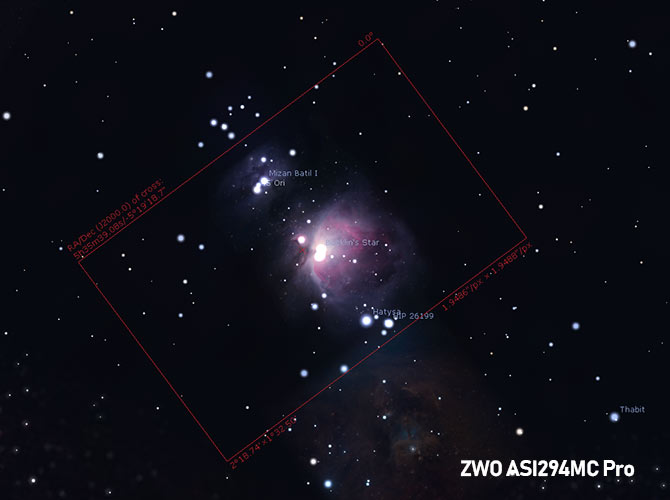 The field of view using the ASI294 with a 550mm focal length refractor.

The backspacing diagram on the ZWO website lists that the camera sensor is to be 55mm from the sensor to the field flattener. For the APEX 0.65X reducer/flattener I was using, this distance increased to 58mm as directed by Starizona.

This is a specific distance recommended for this particular telescope and reducer combination. In most cases, stick with the listed 55mm of back focus for your camera.

It was very easy to create this spacing using the included 11mm ring on the ASI533MC Pro, the Starizona adapter and the filter slider drawer. 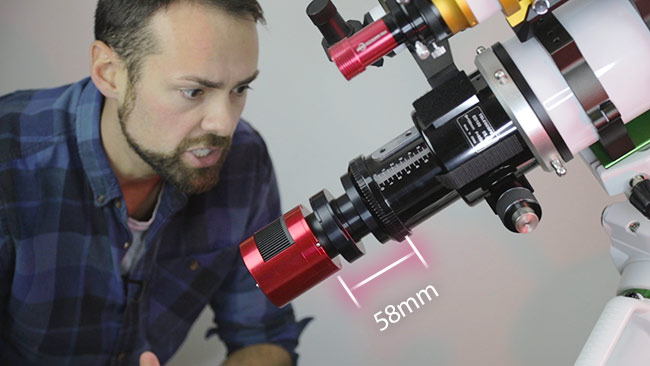 It seems as though ZWO really wants you to try this camera out with a dual-bandpass narrowband filter, as they are currently (at the time of writing) including a duo-band filter with the camera.

I was not sent the ZWO duo-band filter and opted to use the Optolong L-eNhance filter with this camera in the backyard. Dual-bandpass narrowband imaging with a color camera has quickly become one of my favorite ways to photograph the night sky from the city.

I chose two targets to photograph using the ASI533MC Pro, the Horsehead Nebula and Flame Nebula in Orion, and NGC 7822 in Cepheus. My first night out with the ASI533MC Pro was very cloudy for most of the night. I ended up with just 13 x 4-minute sub-exposures on my target.

This is not enough integration time for a quality astrophoto, but it did give me a great idea of the image scale of this IMX533 sensor. 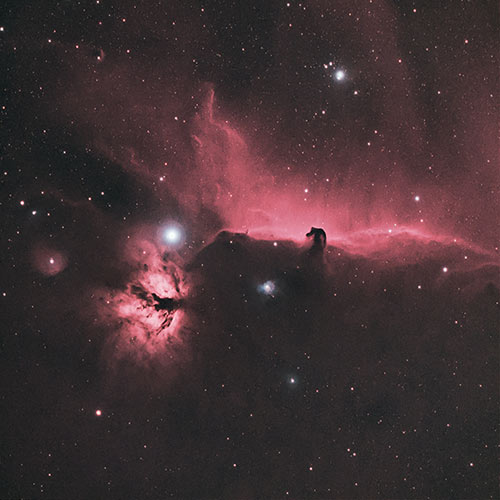 In this image, I simply did not have enough signal to take a fair look at the data. Two nights later, however, I was able to collect a healthy amount of light on another nebula target, NGC 7822.

This time, I shot 30 x 5-minute exposures (again, at Unity Gain) for a grand total of 2.5 hours in one-shot-color. Dark frame subtraction was applied to improve the signal-to-noise ratio of the stacked image, and I was finally able to see what the ASI533MC Pro could really do.

The following image was captured through the same telescope system shown in my video, including the Starizona APEX 0.65 reducer. 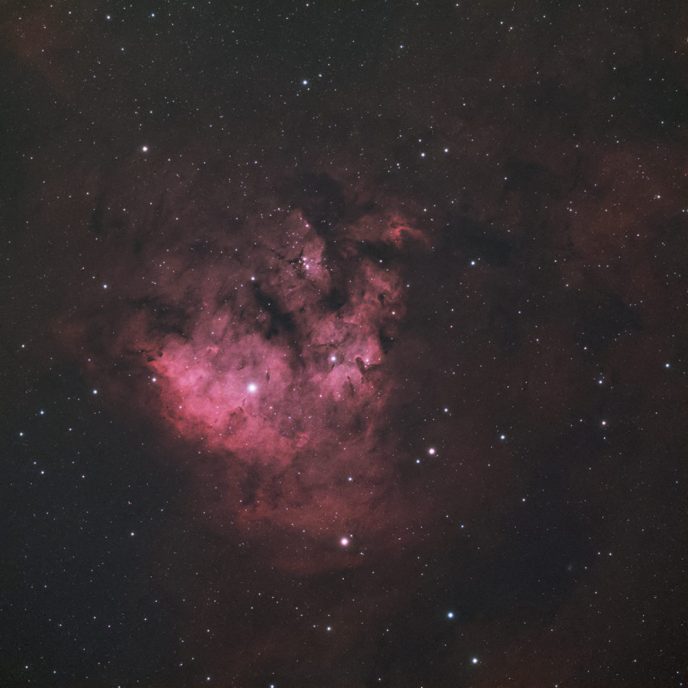 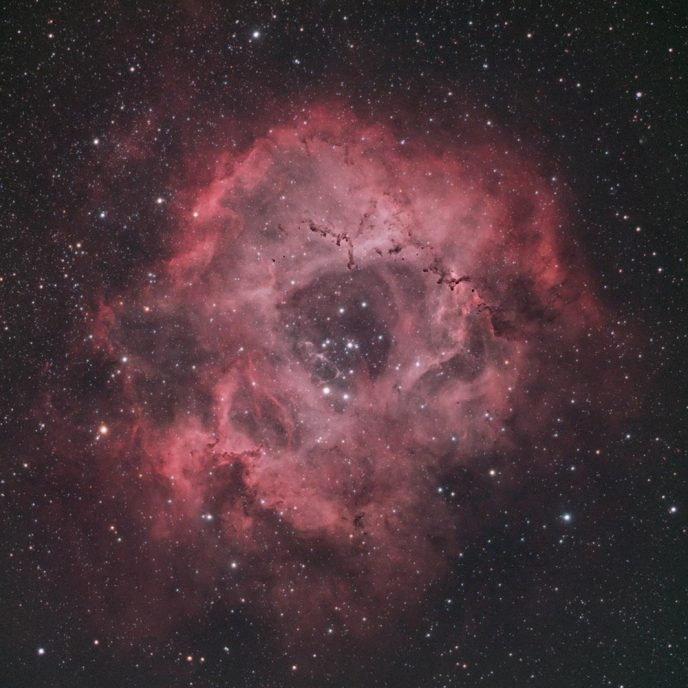 As I mentioned earlier, one of the key differences between the ASI533 and ASI294 is the resolution. The pixel scale using my optical system has changed due to the smaller pixels (3.76 um) on the ASI533MC Pro sensor.

To my surprise, I did see a noticeable difference in resolution in the images taken using the ASI533MC Pro. It is difficult to illustrate this in an image shown on my website, but the added resolution became obvious as I spent time processing the image of NGC 7822 up-close.

I believe that the image of the red-channel (with 25% green mixed in for dynamic range) illustrates the impressive resolution of this camera. 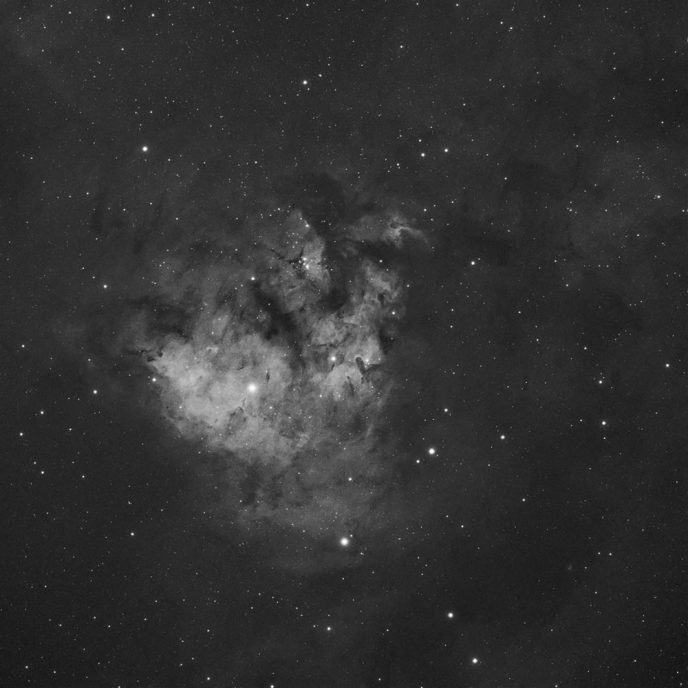 The resolution of the ASI533MC Pro was impressive using my optical system.

I am excited to try this camera on the Rosette Nebula in the coming months. The field of view (with the 0.65 reducer in place) looks to be a perfect fit for this object.

Who This Camera is For

As with most dedicated astronomy cameras, the overall practicality of the ASI533MC pro will depend on the optical system you plan on using it with. For those of you that shoot with wide-field refractors as I often do, I think you will be pleasantly surprised with the quality of the data you collect.

With the 550mm focal length of Sky-Watcher Esprit 100 APO, the field of view and pixel scale was a good fit. Now, as many have pointed out, I changed the native pixel scale of this telescope by using the Starizona APEX 0.65 reducer.

If you are unfamiliar with the pixel scale formula, here it is:

With the Starizona 0.65X Reducer:

In the amateur astrophotography community, a general rule of thumb is to use a pixel scale that is between 1.0 to 2.0 to be “well-sampled”. This is simply a rough guideline and should not be taken too literally.

Using this guideline, the pixel scale of the Esprit 100 + 0.65 means that my images are under-sampled (blocky). If the image looks too blocky for you (see the full-res version on Astrobin), then perhaps this camera is not a good fit for you. Me? I think it’s just right.

The image of NGC 7822 shown below was particularly exciting for me to process. This is partly because it is a new deep-sky object for me, but also because I noticed an increase in image resolution from the images captured using the 294MC Pro. 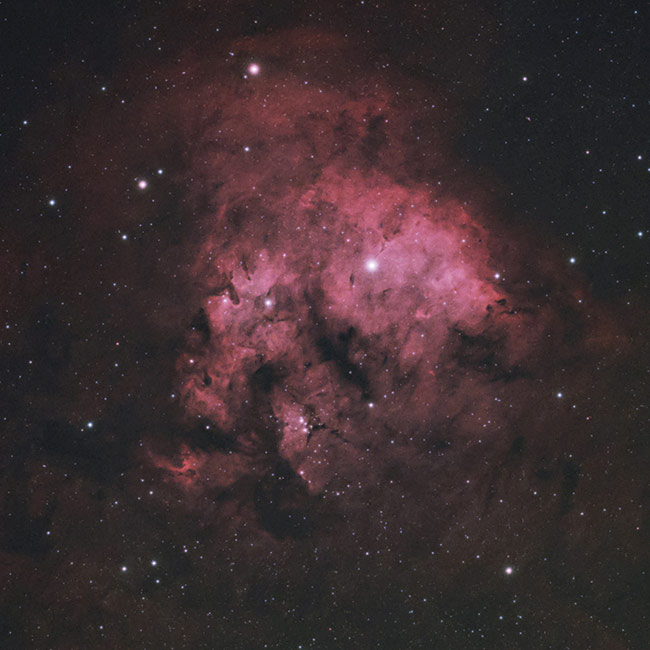