What is the North Star?

The North Star is Polaris, located in the constellation Ursa Minor. It does not sit directly on the Earth’s north celestial pole, but it is very close. In the northern hemisphere, Polaris is easy to identify using the Little Dipper as a reference.

The stars and constellations in the night sky appear to rotate around the North Star throughout the year. A common misconception about the North Star is that it is the brightest star in the sky, but that is not true. 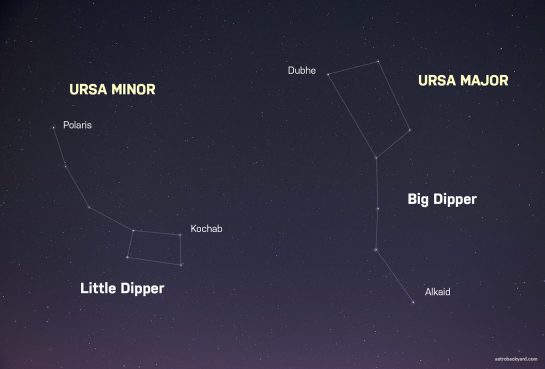 Polaris, or commonly known as The North Star is located almost directly above the North Celestial Pole, marking the way due north.

Polaris is not the brightest star in the night sky. However, it is easily located making it a reliable gauge of North for travelers without a compass.

In this article, I’ll explain how to find the North Star is in the night sky and some interesting facts about Earth’s pole star. 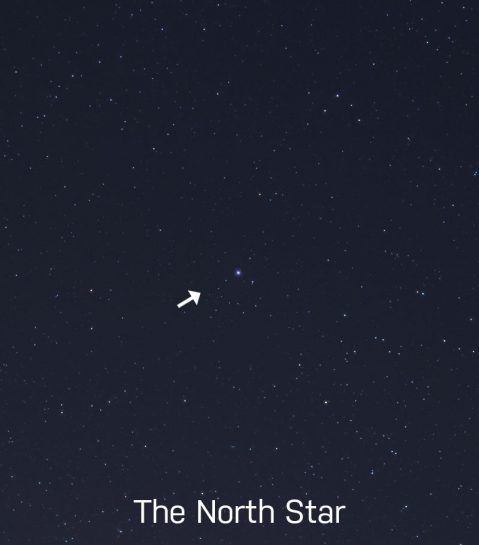 As you travel northward, Polaris climbs higher in the sky. If you go as far north as the North Pole, Polaris will appear directly overhead. As you travel south, Polaris drops closer to the northern horizon.

From the equator, Polaris sinks to the horizon and cannot be seen from the South of the equator. In the Northern Hemisphere, finding Polaris means you know the direction north.

The following video provides a basic overview of how to locate the North Star. A little further down the post, I’ve included a really simple step-by-step guide.

Polaris is easy to find if you can first locate the Little Dipper, Ursa Minor.

Polaris lies at the end of the handle in the Little Dipper. Polaris can also be located by finding the Big Dipper, Ursa Major.

To locate Polaris, all you have to do is to find the Big Dipper pointer stars Dubhe and Merak. These two stars outline the outer part of the Big Dipper’s bowl. Draw a line from Merak through Dubhe, and follow straight to Polaris, as well as the little dipper.

The Big Dipper lies below the little dipper and their handles point in opposite directions.

The Big Dipper, like a great big hour hand, goes a full counter-clockwise circle around Polaris in one day.

Even though the Big Dipper travels around Polaris all night long, the Big Dipper pointer stars always point to Polaris on any day of the year, and at any time of the night.

How to Find the North Star

The following steps will help you locate the North Star in the northern hemisphere sky. It is not difficult to find Polaris, as long as it sits high enough in the sky from your latitude, and obstructions such as large trees are not blocking your view.

The amount of local light pollution in your location can make seeing stars difficult. You can find out where your backyard falls in the Bortle Scale using this guide. 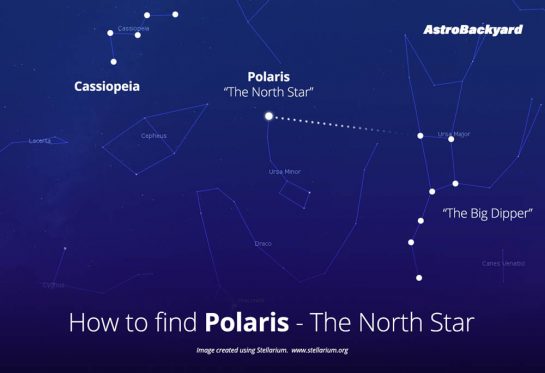 Amateur astronomers and astrophotographers must understand how to find the North Star to align their telescopes. Polar alignment is a critical step of the process when using an equatorial telescope mount.

Once the mounts polar axis is aligned with the north celestial pole, the telescope can accurately track the apparent motion of the stars across the night sky in the sidereal rate.

Will the North Star Change?

Polaris marks the center of Nature’s grandest celestial clock. However the North Star has not always been, nor will it always be the Pole Star.

This is because the Earth’s axis changes slightly over time, and stars move in relation to each other over time.

In the year 3000 B.C.E, the North Star was a star different star called Thuban (also known as Alpha Draconis).

In about 13,000 years from our current date, the precession of the rotation axis will mean that the bright star Vega will become the North Star. 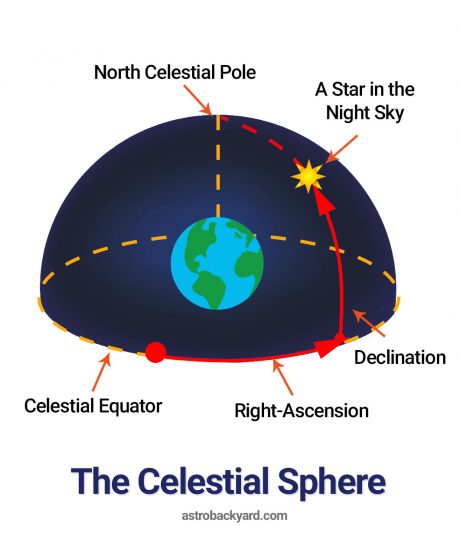 How Far Away is Polaris?

It is estimated that Polaris’ distance is roughly 430 light-years away. The single point of light that we see as Polaris is actually a triple star system; three stars orbiting a common center of mass.

The primary star, Polaris A, is a supergiant more than two thousand times brighter than our sun. The next closest companion is Polaris Ab, a main-sequence star.

These two companion stars are the same temperature as Polaris A, however, they are actually dwarf stars.

Why Polaris is so Fascinating

By watching the motion of Polaris A’s companion star, Polaris Ab, astronomers expect to learn not only the stars’ orbits but also their masses. Measuring the mass of a star is one of the most difficult tasks.

Astronomers want to determine the mass of Polaris accurately because it is the nearest Cepheid variable star; a type of star that pulsates radially, varying in both diameter and temperature and producing changes in brightness with a well-defined stable period and amplitude.

Cepheid variable stars can be used to measure the distance to galaxies and the expansion rate of the universe. This is why it is so important to understand their physics and evolution.

The most important part of this process is knowing a Cepheid’s mass. The North Star (Polaris) is a Cepheid variable, but its periodic variations in brightness are steadily decreasing in amplitude. This has been observed to be the case for the last hundred years.

“Around the beginning of the 20th Century, Polaris’ brightness fluctuated every four days by 10%. Only ten years ago this variation had dropped to 2%, leading astronomers to believe this steady decline in the variability of the star was about to end.

That was until recent observations uncovered an increase in variability to 4%. Polaris is an odd star in that it is a Cephid variable with a declining variability, and now astronomers are baffled as to why the brightness fluctuation has been revived.

The NASA’s Hubble Space Telescope has been able to have photographed the close companion of Polaris for the first time.” – Center for Astrophysics.

The researchers plan to continue observing the Polaris system for several years. During that time, the movement of the small companion in its 30-year orbit around Polaris A, should be detectable.

The ultimate goal is the get an accurate mass for Polaris by measuring the motion of the companion, Polaris Ab in its orbit. 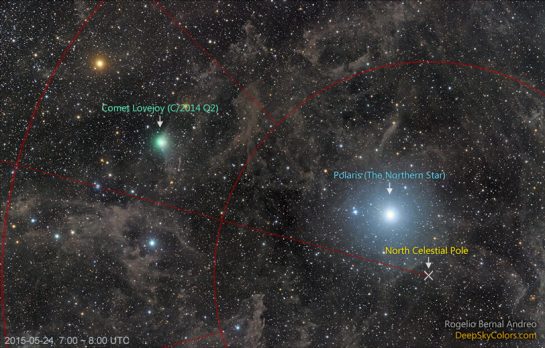