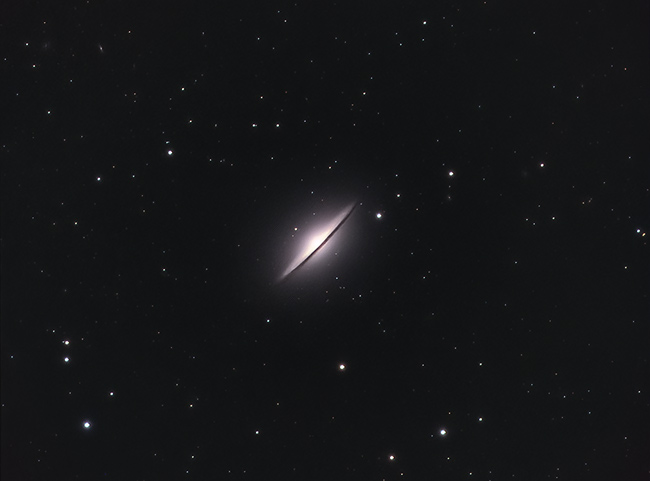 The Sombrero Galaxy (M104) is a lenticular galaxy in the constellation Virgo found. It is one of the most massive objects in the Virgo galaxy cluster.

From our vantage point on Earth, we are viewing this galaxy nearly edge-on. M104 has a bright nucleus, an unusually large central bulge, and a prominent dark dust lane that crosses in front of it.

The dark dust lane and the bright nucleus bulge give this handsome galaxy the appearance of a sombrero hat. The Sombrero Galaxy has a diameter of about 49,000 light-years and lies approximately 31.1 million light-years from Earth.

M104 has an apparent magnitude of +8.0, making it easily visible with amateur astronomy telescopes. This galaxy has been well studied by astronomers for many years.

This NASA image of the Sombrero Galaxy is one of the largest mosaics ever assembled from Hubble observations.

You’ll find M104 near the border of the constellations Virgo and Corvus. To find the Sobrero Galaxy with your binoculars or a telescope, it is best to start by finding the bright star, Spica.

Spica is a double star, with a spectral type of B1V. In the star chart below, you’ll notice that M104 sits between Spica in Virgo, and Algorab in Corvus.

The act coordinates of the Sobrero Galaxy are: Right ascension 12h 39m 59.4s, Declination −11° 37′ 23″. I like to use an astronomy app on my smartphone to help identify deep-sky objects in the night sky. The location of Messier 104 in the constellation Virgo (image created using  Stellarium).

The Sombrero Galaxy is a fantastic astrophotography subject to photograph during Galaxy Season. In the northern hemisphere, the constellation Virgo is in prime position for observations and photography during the month of May.

I have photographed M104 from my backyard on a number of occasions. Although this galaxy appears very small (9′ × 4′ angular diameter) in the night sky, even a small refractor telescope will reveal the Sombrero Galaxy’s memorable appearance.

An optical instrument with more aperture and focal length is recommended (1000mm+), to really pull this object in for a closer look.

The image below was captured using a Starlight Xpress CCD camera (Trius 694 Mono) and a Sky-Watcher Esprit 150 apochromatic refractor. A Sky-Watcher EQ8-R Pro telescope mount accurately tracked the apparent motion of this galaxy across the sky for a long exposure image. 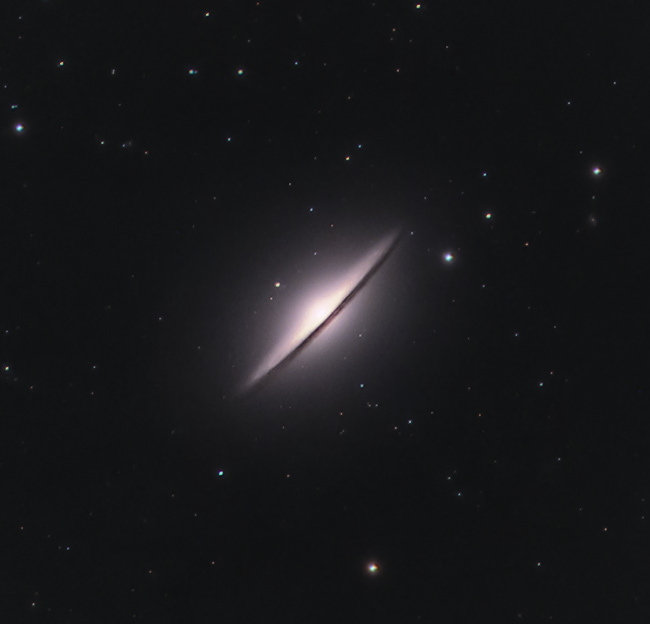 The Sombrero Galaxy in Virgo.

This image was created by capturing images with a monochrome camera through LRGB filters. My image includes over 5 hours of total exposure time.

The images captured through each color filter (RGB) were registered and stacked in DeepSkyStacker. The combined data was then processed in Adobe Photoshop.

For a better idea of how I process my astrophotography images using Adobe Photoshop, please see my premium image processing guide.

The Sombrero Galaxy is one of Charles Messier’s 110 deep-sky objects, but it was actually discovered by his colleague Pierre Méchain.

At the time of discovery, Charles Messier had just completed his list of 103 deep-sky wonders, but Méchain’s additional find was too late to be included.

By 1921, Méchain’s discovery was designated as Messier 104, and since then, six more entries deemed historically worthy to be included in the Messier catalog. 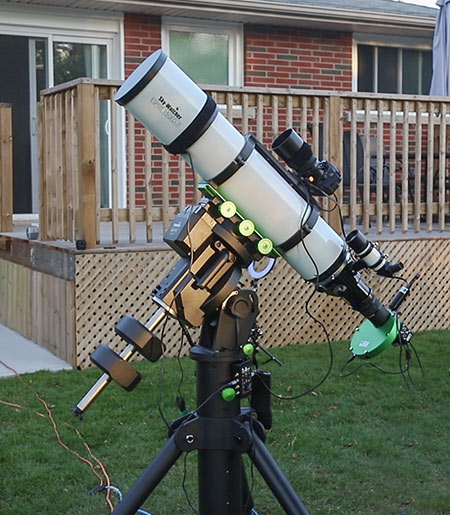 The telescope used to photograph my image of the Sombrero Galaxy.

In the 1990’s, scientists were able to confirm that a supermassive black hole is present within the Sombrero Galaxy.