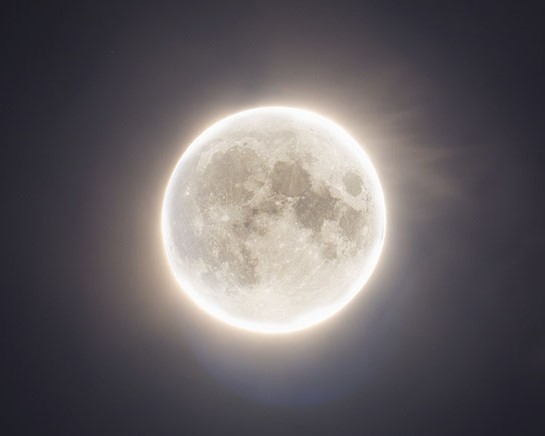 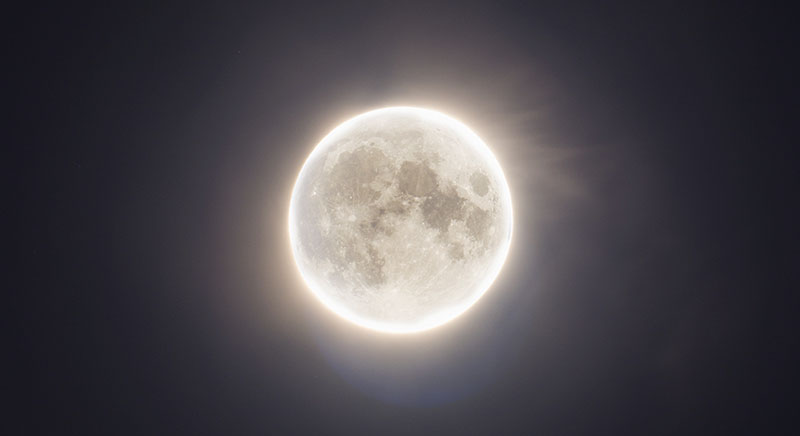 Merry Christmas and a happy new year to all of my fellow astronomy nerds out there!  2015 was an amazing year for me and my family with the purchase of a new home and the addition of a new four-legged friend named Rudolph. Next year will be even better as I continue advancing my skills in astrophotography, and sharing new tips and tutorials with my audience.  Thank you to everyone who has ever liked, retweeted, reblogged or double-tapped any of my images this year.  Merry Christmas!

So how did I get this shot?

I always seem to get a lot of comments about how interesting my moon photography is when it includes detail on the moon, plus the glow around it you see when there are a few clouds in the sky.  I’ve heard things like, “it looks like the sun!” and, “you can see the corona!”.  Well, the explanation is simple: I combine two separate exposures together. 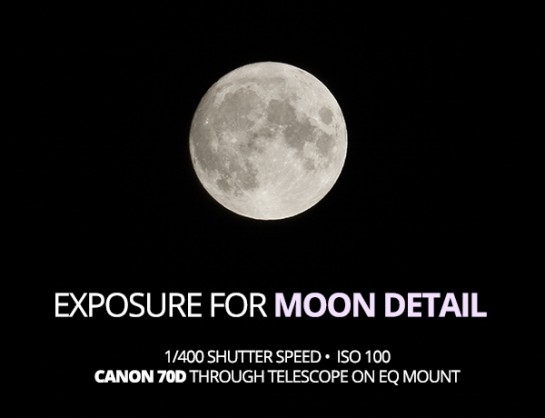 This was the result of a 1/400 shutter speed with the Canon 70D at ISO 100.  This was taken through my Explore Scientific ED80 Telescope riding on my Skywatcher EQ Mount. If you are taking the shot on a tripod through a long telephoto lens, you may have to use a higher ISO and a shorter exposure to avoid camera shake.  A telescope on a tracking EQ mount tracks the sky and moves with the moon, allowing me to take longer, steady exposures.

As you can see, even a mere 1 second exposure completely blows-out the details on the moon, yet it picks up the beautiful glow produced by the weather conditions that night. The trick now is to overlay the shorter exposure that includes the details on the surface of the moon.  You will want to copy and paste the shorter exposure image as a new layer on top of the blown-out version.  Then, feather the edges of the detail version to blend the two exposures together. There are a bunch of different ways to accomplish this task, but being an old-school photoshop guy, I still like my old-fashioned eraser brush! 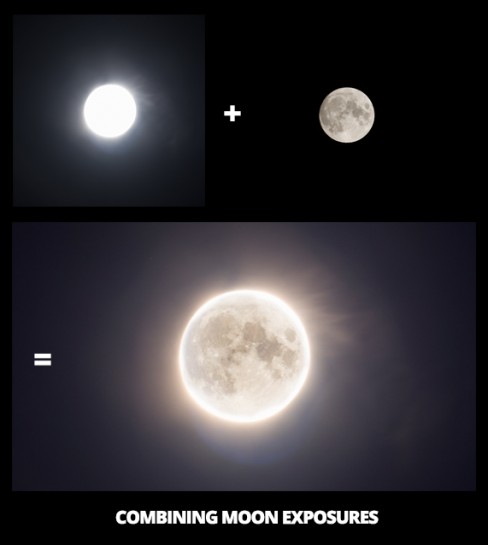 It’s not for everyone, but I personally love the look of shots like these. It’s like the best of both worlds, you can see the a more natural looking moon in the sky under the current weather conditions, but can also enjoy the marvelous moon details. I hope this has been a useful tutorial for this method, and that you give it a try for yourself some day.

Here is another Example Using this Technique: 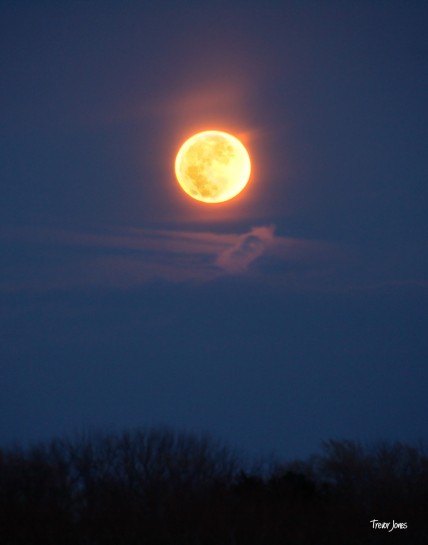 Photograph the Moon with a Point and Shoot Camera 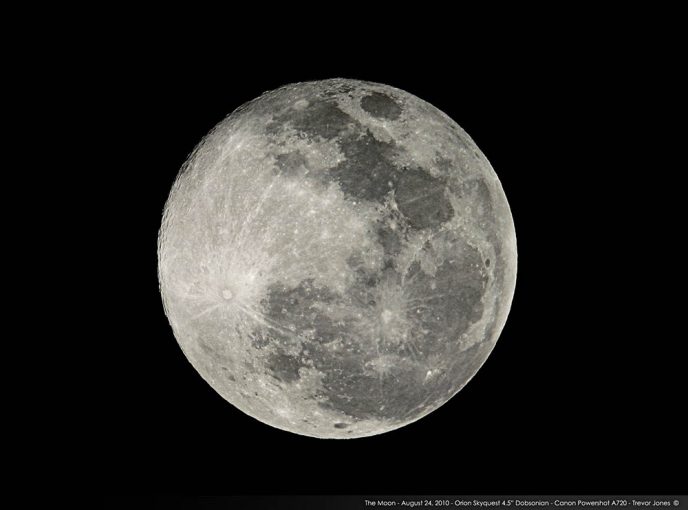 Photograph the Moon with a point and shoot camera

You can take some incredible pictures of the moon through a telescope using an inexpensive point-and-shoot camera. Some of my very first astrophotography images were of the moon in its many phases using the afocal method (eyepiece projection does not use a camera lens) method.

The photo above was captured way back in 2010 through my first telescope, an Orion SkyQuest Dobsonian. Since then, I have photographed the moon countless times through a telescope. You can see my best moon photos in the gallery I dedicated to Earth’s natural satellite:

In this post, I’ll share a few tips I learned the hard way through trial and error. Despite the limited gear and experience, I had at this stage, photographing the moon through my telescope created some of the most memorable moments I’ve ever had with this hobby.

The full moon is not the best phase to photograph if you wish to capture the detailed lunar surface. A first quarter or waxing crescent moon will showcase interesting surface details along the lunar terminator.

Taking your point-and-shoot camera (an example is a Canon Powershot SX720) and pointing it into a telescope eyepiece is known as the afocal astrophotography method.

You simply line the camera lens up with the opening of the eyepiece and try to capture the view seen through the telescope at that magnification. In the early days, I shot many astrophotography images using this method through my Orion SkyQuest Dobsonian telescope.

Here is a video I shot long ago, where you’ll see me using the afocal method with my point and shoot camera:

To make matters even more difficult, the target will slowly move out of view unless you are using a tracking mount. This was the case with my Dobsonian telescope, but using a wider (lower magnification) eyepiece can reduce this issue. (I typically used a 25mm eyepiece when photographing the moon)

It’s easiest to practice on a bright target such as the moon, before trying to photograph one of the planets or a deep sky object. Many people will say that you “can’t photograph deep-sky objects without a tracking mount” using the eyepiece projection method, but you can.

The images will just be quite underwhelming!

I’d stick with shooting solar system objects only, as they are bright enough to capture in a short “auto” exposure from your camera.

Here are some of the night sky targets I shot using the afocal method:

None of the deep sky objects I captured turned out very good, so set your expectations accordingly. To photograph deep sky objects you’ll need a tracking camera mount to compensate for the movement of the sky.

Remember, a wide-field eyepiece will result in a slower-moving target. This a great for a large object like the moon, but Barlow lenses and eyepieces with higher magnification are better for photographing planets.

A high magnification eyepiece such as a 10mm Plossl will provide you with an up-close look at Saturn, but it will be moving rather quickly on a stationary telescope mount. Add a 2X Barlow lens to the mix, and it will zip by even faster.

One of the main reasons point and shoot cameras are so popular among amateur photographers, is their ease of use. This idea is encapsulated in the ever-popular “auto” mode of the camera, which means that it will select the correct ISO, aperture, and exposure length for the current scene.

The problem with auto mode for astrophotography is that it was not designed for taking images at night without a flash. Using the auto camera mode pointing up towards a dark sky or through the telescope will result in the “night-vision-ruining” camera flash going off. Not good.

Instead, use manual mode, where you can select each camera setting yourself.

The moon is easiest, as it is so bright you can get away with a quick 1/1000 of a second exposure. Even auto may work, as long I have turned the flash off. Below, I list some generic settings for photographing the moon through your telescope eyepiece.

Point and Shoot Camera Settings for the Moon:

You’ll need to experiment heavily with settings on the eyepiece here. For dimmer targets, I found it best to use an exposure length of about 1/250, with an ISO of 800. Increasing the ISO too much will let you shoot faster shots, but will always increase noise.

Noise can be largely removed in post-processing, but it’s always best to avoid it when possible.

This was enough to pull in a little extra light on my target, but not so long that I couldn’t keep the camera still during the shot. This is how I captured photos of the Orion Nebula that actually showed color.

Point and Shoot Camera Settings for Planets and DSO’s 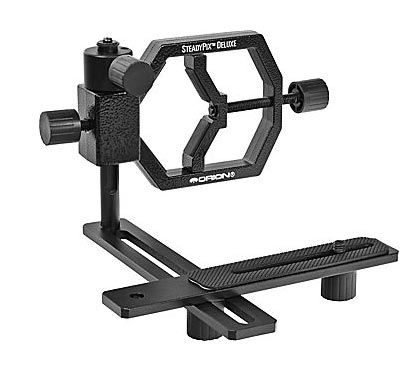