The Explore Scientific ED80 was recommended to me by a friend I met on an online astrophotography forum. He had recently posted another exquisite photograph using the ED80, that showcased the incredible imaging capabilities of this triplet APO.

At that time, I had no idea that this telescope would be my ticket to a lifelong ride in the world of astrophotography. This apochromatic refractor comes in both aluminum and carbon fiber variations and was a pivotal factor in my ongoing dedication to the art of deep-sky astrophotography. 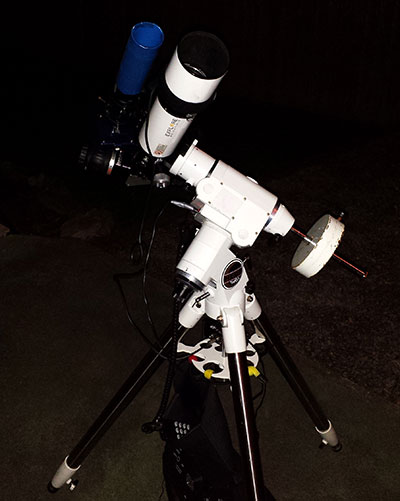 My Explore Scientific ED80 on a Sky-Watcher HEQ5 GoTo Mount.

When I first began taking pictures of deep-sky objects through my telescope, they were shaky images with bloated football stars and poor focus. Even the slightest breeze would jiggle my bulky Schmidt-Newtonian, thereby ruining my current 3-minute exposure.

This experience left me discouraged, and in search of a telescope that was designed for my astrophotography needs. I desired to capture sharp images with pinpoint stars like the ones I had seen on APOD (Astronomy Picture of the Day). All of my favorite images online had something in common, they were imaged using an apochromatic refractor. 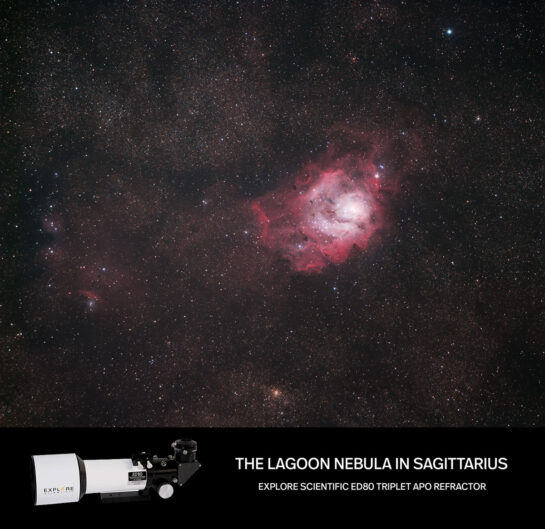 I also noticed terms like “doublet” and “triplet” being used, so I investigated further. I learned that a triplet apochromatic telescope design offered impressive color correction and brilliant high-contrast images. The high-quality glass design of an apochromatic refractor reminds me of a high-end telephoto camera lens.

With several “triplet apo’s” on the market, much of my investigation revolved around price. The model available from Explore Scientific had the specifications I was looking for, at a price I was comfortable with for my newfound hobby. 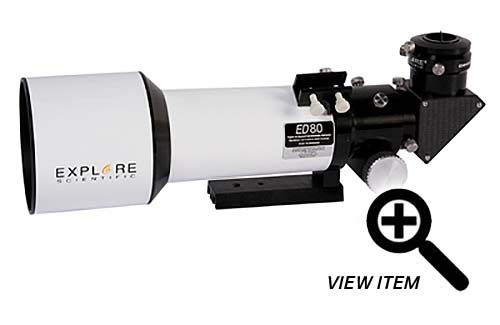 The version I purchased included a hard carrying case, an illuminated reticle finderscope, and a diagonal. 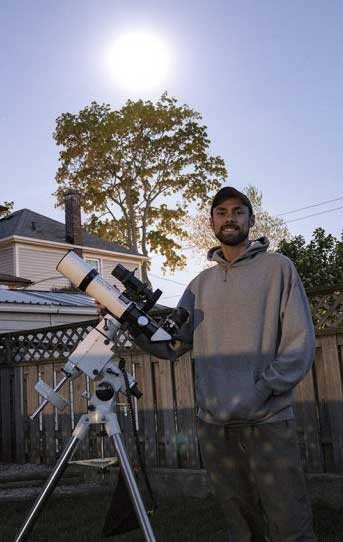 The very first deep-sky object I photographed through the ED80 was the Orion Nebula. I couldn’t believe how precise I could focus the stars using the heavy-duty dual-speed 2″ focuser.

The fine-tuning knob was something I had never used before, and at this point, I could tell that this telescope was made for astrophotography. Even without a field-flattener, the stars remained sharp pinpoints almost to the very edges of my image.

When the very first frame appeared on the back of my DSLR display screen, my jaw hit the floor. At f/6, I was delighted with the amount of light I was able to capture in a 3-minute exposure with the modest 80mm objective. The 480mm focal length seems to be the “sweet spot” for capturing large, wide-field views of nebulae and large galaxies.

From the moment that first exposure of the Orion Nebula appeared on the camera screen of my Canon 450D, I was in love with the image quality produced by the Explore Scientific ED80.

After a quick adjustment using Sirius as my alignment and focus star, the illuminated reticle finder scope was a pleasure to use and to center my target in the frame. I would later swap out the finder scope for an autoguiding system, an easy switch into the bracket on the ED80. 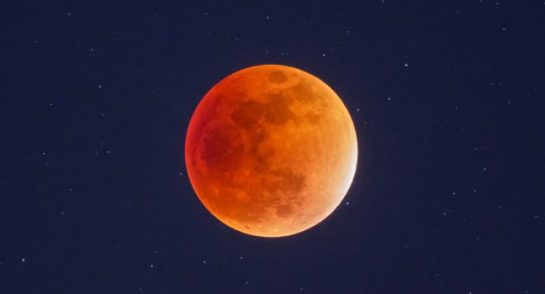 A Total Lunar Eclipse, photographed with the Explore Scientific ED80.

The astrophotos I have been able to capture with this telescope have opened my eyes to a higher level of image quality. I have not been able to achieve images of this quality using a Newtonian telescope. I think that once you get used to the pinpoint stars and sharpness of an Apo, it’s hard to accept anything less.  They say the best telescope is the one you use the most, and my ED80 has been used for more hours under the stars than I care to admit!

This refractor is incredibly portable.  On most nights, I’ll have my DSLR attached, focused, and ready to image in less than 10 minutes.  The telescope’s lightweight, short tube and “Vixen-style” dovetail make it a versatile instrument suitable for virtually any telescope mount. When not in use, it all packs away securely in the padded metal hard-case.  While under the night sky, the dew-shield blocks stray light and protects the high-quality ED (extra-low dispersion) glass on the objective.

I highly recommend the ED80 to beginner to intermediate astrophotographers looking for the highest possible image quality at an affordable price.  I am so happy with the performance of the 80mm version, that upgrading to the Explore Scientific ED102 Carbon Fiber version was a no-brainer.  If you want a second opinion on the ED80, talk to anyone that owns one!  I am certain that they feel the same way.

This telescope has been an absolute pleasure to own and use for astrophotography over the past 4 years.  At the time of purchase, my budget restricted me to smaller refractors in the 80mm range, but I had no idea of the wide-field astrophotography capabilities of the telescopes in this range.

With a focal length of 480mm, this high-quality instrument can easily fit the entire Andromeda Galaxy in a single field of view, as well as M8 and M20.

A common question I get is about the finderscope bracket on the Explore Scientific ED80.  Most users who intend to use the telescope for astrophotography will be connecting an autoguider telescope and camera to increase the precision tracking of the equatorial mount.

Rather than attaching a separate bracket to hold this autoguiding telescope, I simply use the existing bracket that was designed to house the finderscope on the ED80.  I would suggest using the Orion 50mm guidescope in the stock finderscope rings included with the Explore Scientific ED80.

Andromeda Galaxy and Nebulae photographed with the Explore Scientific ED80

The small weight and size (7.5 lbs., 18.5″ long with dew shield) of this instrument make it the ultimate grab and go telescope.  This also means that even a modest tracking mount will have no trouble handling the weight of the telescope, along with all of the camera gear needed for astrophotography.

My Sky-Watcher HEQ5 Pro only requires 1 counterweight near the top of the shaft to balance the ED80, guide scope, guide camera, and my Canon EOS Rebel Xsi DSLR. 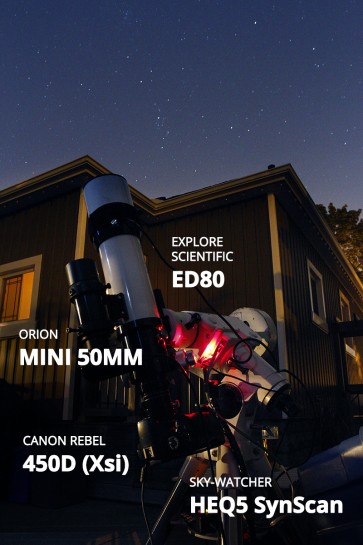 My Astrophotography Rig in the backyard

The visual performance of this scope is excellent, especially when viewing bright planets or the moon.  The diffraction-limited optics are appreciated when exploring the lunar terrain or using a high-powered eyepiece to view Saturn’s rings.

I must confess that I am not an expert when it comes to comparing the visual performance of telescopes. However, the views I have experienced with the ED80 have noticeably more contrast than my 8″ Orion Newtonian Reflector. 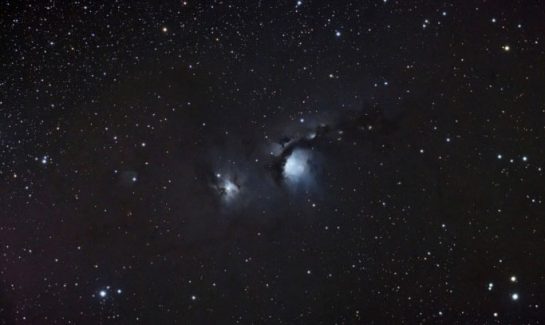 The real reason I decided on this telescope was its superb photography potential.  The air-spaced triplet optical design virtually eliminates chromatic aberrations and generates beautiful high-contrast images. The HOYA extra-low dispersion (ED) glass is a trait found in a much more expensive refractor telescope.

The included diagonal helps me comfortable view the alignment stars while I calibrate my mount for a night of astrophotography. The dual-speed, Crayford-style focuser is ultra-solid and tightly locks my DSLR camera into place while imaging.

The precision focuser knob comes in very handy when focusing my camera using the “frame and focus” (FWHM) tab on BackyardEOS. 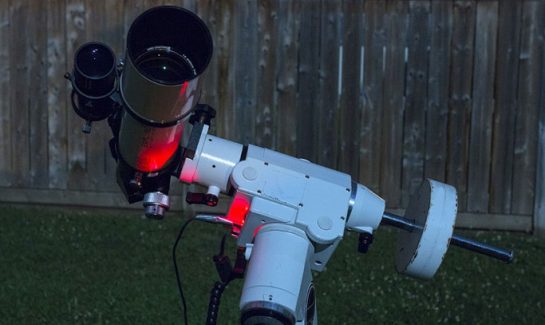 The Explore Scientific ED80 on an astrophotography mount