Messier 81, also known as Bode’s Galaxy is a grand design spiral galaxy in the constellation Ursa Major. M81 is one of the brightest galaxies in our night sky, as seen here on Earth.

Its size and well-defined spiral arms make it a formidable sight through almost any telescope. A telescope with an aperture of 8″ or more will show more detail under dark skies. (I recommend the Apertura AD8 for beginners).

Bode’s Galaxy lies approximately 11.8 million light-years from Earth, with an apparent magnitude of 6.9. Bode’s Galaxy is located about 10 degrees northwest of  Dubhe in the corner of the Big Dipper‘s bowl.

Many other galaxies are also located in the surrounding area. The Cigar Galaxy (M82)  lies so close to M81, that they are often photographed together using a wide-field telescope. 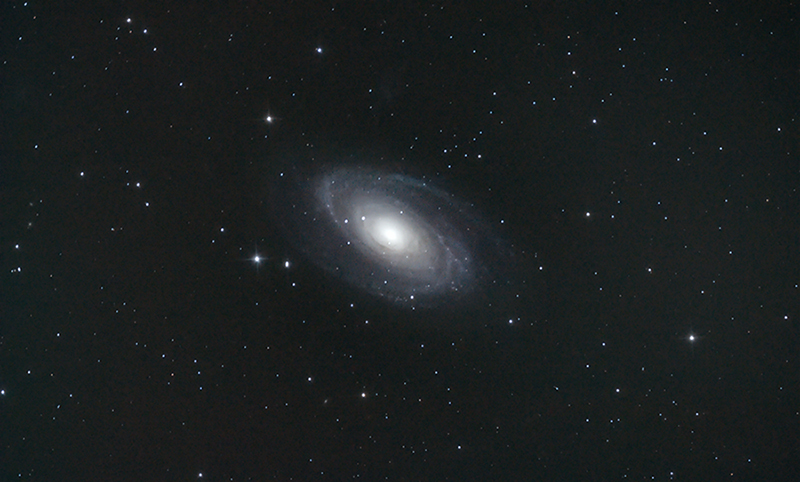 In the northern hemisphere, Bode’s Galaxy is not difficult to locate in the night sky. This galaxy is bright enough to observe under light-polluted skies, as I am able to easily spot it during the new moon phase under my Bortle Scale Class 8 backyard sky.

Look towards the Big Dipper in Ursa Major, and use the stars Merak and Dubhe to draw a line towards M81 and M82. From there, point your telescope below and to-the-right of this line, and you should see the glow of Bode’s Galaxy after scanning the area. 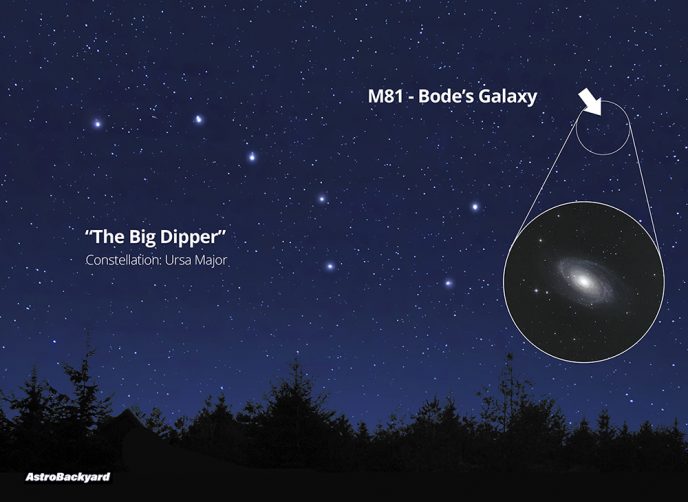 From mid-northern latitudes, the best time to observe and photograph Bode’s Galaxy is between the months of February to May. As you can see in the screenshot (created using Stellarium), Ursa Major reaches high into the sky during these months, meaning that there is less chance of running into a terrestrial obstruction when trying to locate M81. 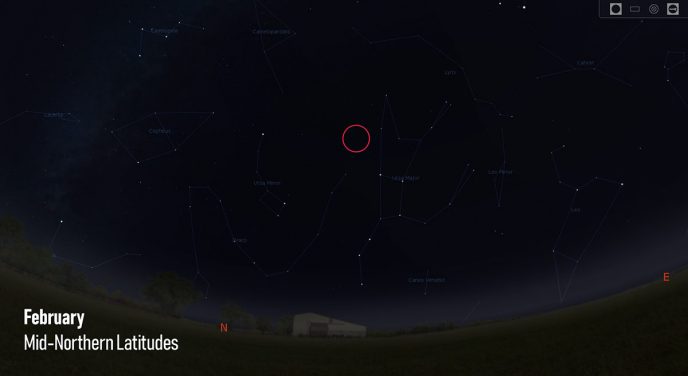 The location of M81 from mid-northern latitudes. February at 8:00pm.

With the short amount of exposure time I was able to gather (under 1 hour), I was happy to pull out as much detail in Bode’s Galaxy as I did. I also think that this galaxy is much better photographed using my larger 800mm Reflector rather than my smaller refractor.

I often experience issues with my guiding software when photographing this area of the night sky. Technical issues have prevented me from capturing much more data on this spectacular grand spiral design galaxy. I hope to revisit this stunning DSO in the near future.