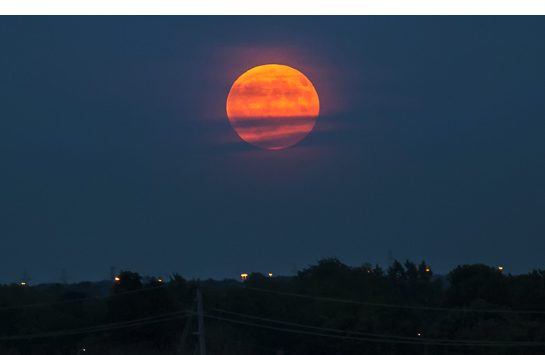 Last night, I ventured to higher ground to photograph the 2016 Harvest Moon. The forecast called for partly cloudy skies, with rain on the way later that night.  I knew it was a long-shot, but I figured that at least Rudy would get a walk out of the deal.

The Harvest Moon was slated to appear at approximately 7:33pm from my location, so I arrived at the park at about 7:00pm. If you prefer to jump straight to the video, go ahead and scroll down to the end of the post!

The equipment I chose to use for this photography venture was quite different from my usual setup.  I used an old full-frame Canon EOS 5D Mark 1 , equipped with my Canon 300mm F/4L (Non IS) Lens.  Both of these items were purchased used from ads that appeared on Kijiji.  I highly suggest regularly browsing classified ads in your area for photography equipment.  Once and a while a real gem will appear, and you can save a LOT of money. 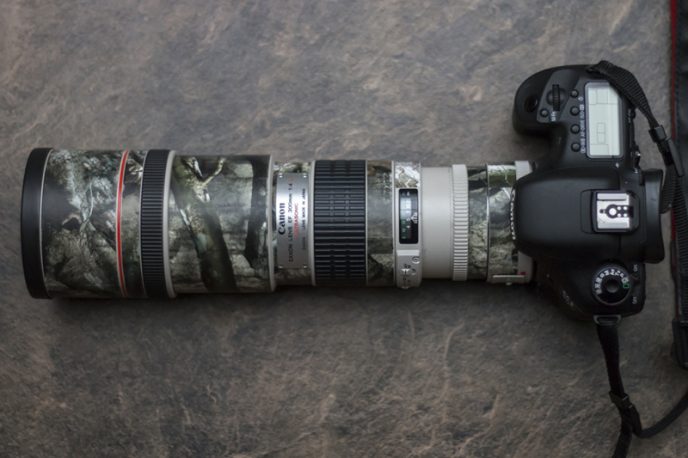 This camera/lens combination provided me with the focal length I wanted to capture the 2016 Harvest Moon low on the horizon.  The full-frame 5D does not extend the focal length of my 300mm lens to 540mm (300 x 1.8) like my crop-sensor 7D would have. The goal was to capture some landscape interest around the full moon rising to get a real feeling of what it was like to witness the event.

Between the fact that I did not bring a tripod (I wanted to travel light, probably a bad idea) and the poor low-light capabilities of the old 5D, the task was more challenging than it should have been! Capturing a properly exposed landscape surrounding the Harvest Moon was impossible.  I settled for shooting handheld exposures of about 1/40 to 1/100 at ISO 1600, it was my only chance of getting a crisp shot.

The Moment of Truth

It was incredibly exciting to see the ultra-pink full Harvest Moon begin to rise from behind the haze of the low atmosphere.  It was a very frantic moment, as I seriously thought that my entire trip was going to be a bust.  I was very fortunate to see the 2016 Harvest Moon, and my efforts were rewarded with a new video documenting the event, some great photos, and of course living in the actual moment and enjoying this incredible celestial event as it happened. 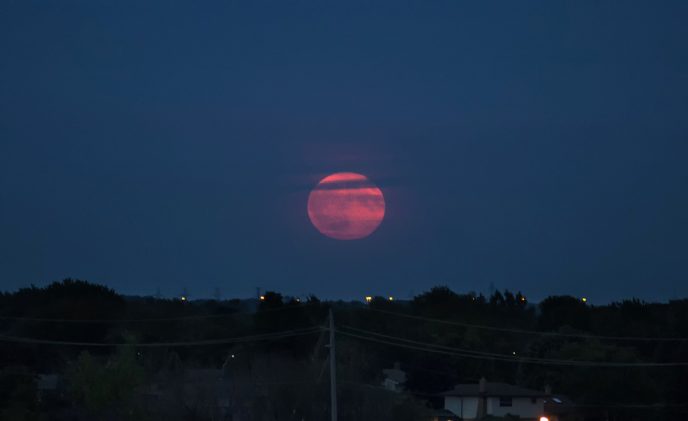 The 2016 Harvest Moon as it first appeared, low on the horizon 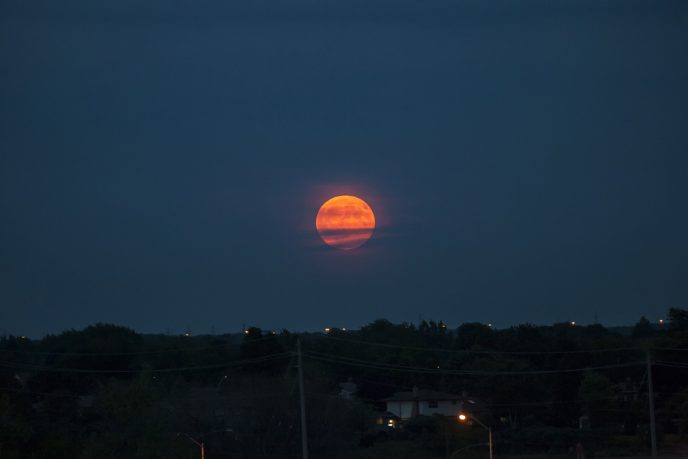 Camera Settings for the Moon Photos Above:

I process all of my astrophotography and daylight landscape images in Adobe Camera Raw. (ACR) The adjustments I make are typically noise reduction, sharpening, contrast, highlight reduction, clarity, and saturation.  The amount of adjustment for each category varies depending on the subject.  An important factor when processing photographs of the full moon is to not “blow-out” the brightness of the lunar surface.  You can read more about how to take pictures of the moon under the tutorials heading in the main menu.

The perfect end to Summer 2016

What a great outcome despite the questionable weather conditions, and my poor equipment planning. I decided to shoot another video for the AstroBackyard YouTube channel along the way and assumed the footage would go unused because the night was a bust.

Thankfully, I was wrong.  Let this be an inspiring story for you to remember the next time you question whether to photograph a celestial event or not.  I hope you enjoy the video: 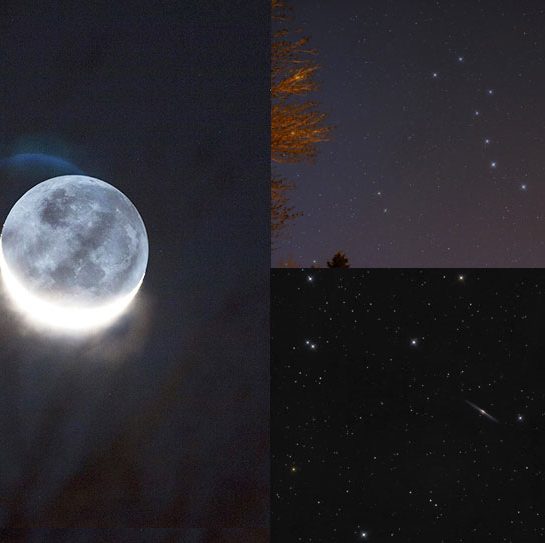 Astrophotography in the City

Saturday Night Under the Stars

Astrophotography in the City

Last weekend I posted a new video to my YouTube channel titled DSLR Astrophotography – A Night in the Backyard with my Camera. It is now Early-April, and we are in what amateur astrophotographers call “Galaxy Season”, as we transition from the Winter Constellations like Orion and Taurus, to the Summer Milky Way objects.  In between, there are some fantastic deep-sky objects to observe in the Spring Constellations Leo, Coma Berenices, and Bootes.

The forecast called for clear skies on that crisp, cold Saturday night in Southern Ontario, and I was ready to image some deep-sky objects with my camera and telescope.  After a late dinner, it was a race against the clock to photograph my first subject of the evening, the Waxing Crescent Moon. If you want to jump straight to the video, you can find it at the bottom of this post.

Live-View DSLR Through a Telescope 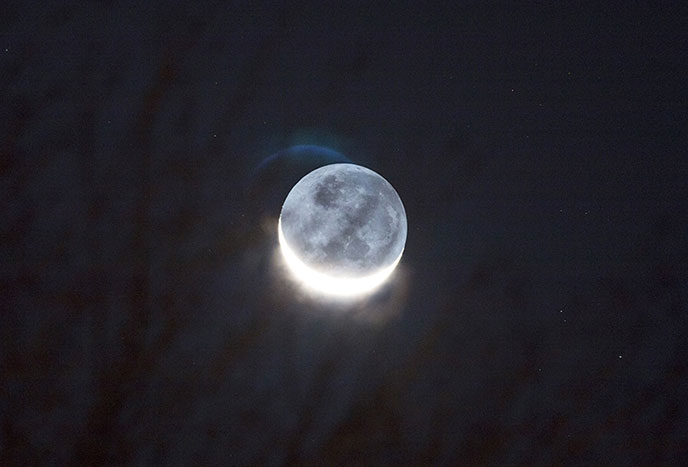 I barely had time to get the beautiful Waxing Crescent moon into my telescope’s eyepiece before it became obscured by the surrounding trees in my neighborhood!  I shot a live-view video of the moon (with Earthshine visible) with my Canon EOS 70D DSLR through the telescope.  This may be of interest to anyone wondering what the view is like through an 80mm refractor telescope.  You need an adapter to attach the camera to the telescope, which you can buy online here.

After I focused the Moon and experimented with different ISO settings and exposure lengths, I snapped a couple of shots before moving on with the rest of my night.  You can have a look at the equipment I use for astrophotography here. 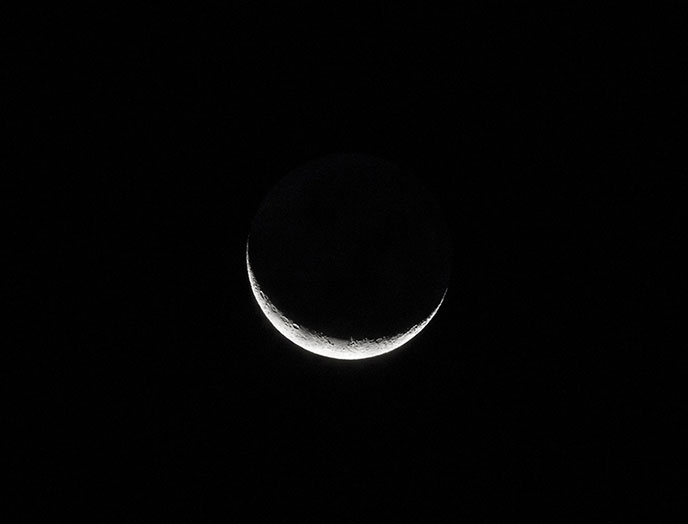 The sky from my backyard

Next, I wanted to provide some examples of the dark-sky quality from my backyard.  Living in the central part of town has its advantages, but dark skies are not one of them!  I experience heavy light pollution from all directions.  This makes using a light-pollution filter on my camera necessary for long exposures.  Currently, I use the IDAS LPS clip-in filter on my Canon Rebel Xsi DSLR.  This allows me to capture exposures of up to 5 minutes from my backyard. 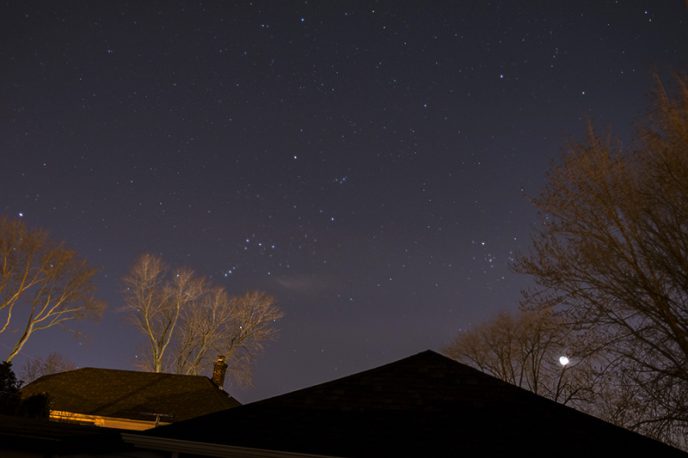 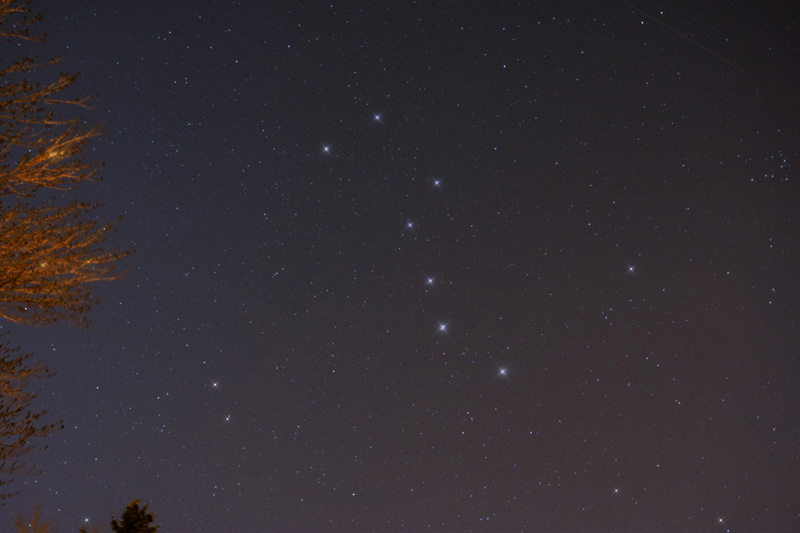 Looking towards the Big Dipper in Ursa Major

Once the moon had set, I promptly prepared my deep-sky astrophotography rig for a night’s worth of photons on my photography subject.  I settled on NGC 4565 – The Needle Galaxy because of it’s size, magnitude, and current location in our night sky.  The Needle Galaxy is an edge-on spiral galaxy that resides about 30-50 million lights years from Earth.  This handsome galaxy is the current photo in my 2016 RASC Observer’s Calendar hanging in my office at work, perhaps that is what gave me the idea!

This interesting NGC object shows up rather small in my 80mm telescope, as many galaxies do.  A larger telescope with a focal length of 1000mm or more would be a better choice for this DSO.  I also had a bit of a challenging evening out the background colour of this image.  Flat frames would have made this issue much easier to deal with in post-processing.  With just under an hour of exposure time, it is safe to say that I will need to add more time to this image to bring out the colour and detail.

I am completely blown away with the response to my YouTube Channel has received.  Thank you to everyone who has subscribed, I look forward to many new astrophotography videos in the future!