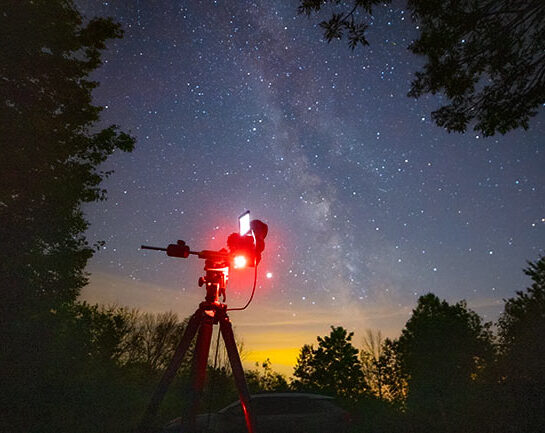 One of the best ways to enjoy astronomy under a dark sky is to go camping. Campgrounds are usually well away from city light pollution, meaning that you will be able to enjoy many more stars in the sky than you are used to seeing at home.

In mid-summer, the sun sets very late at the campgrounds in Ontario, and most campers are settling in for cozy sleep in their sleeping bag. But if you’re anything like me, your night is just beginning.

The parks listed in this article are some of the best stargazing sites near Toronto. Selkirk Provincial Park is only a 1.5-hour drive from Toronto and boasts spectacular dark skies for Milky Way Photography.

During the summer months, I like to leave my light-polluted backyard in the city and travel to some Ontario Campgrounds for some stargazing and astronomy.

My two favorite Ontario parks are Rock Point Provincial Park and Selkirk Provincial Park. They both offer fantastic dark skies looking south over Lake Erie, which happens to be the direction of the Milky Way core during July and August.

There are several dark sky camping locations along the north shore of Lake Erie, including Long Point Provincial Park. This park is a little farther away from Toronto (about a 2-hour drive).

Here is a photo I took of the Milky Way using my camera and a portable star tracker from Long Point Provincial Park. 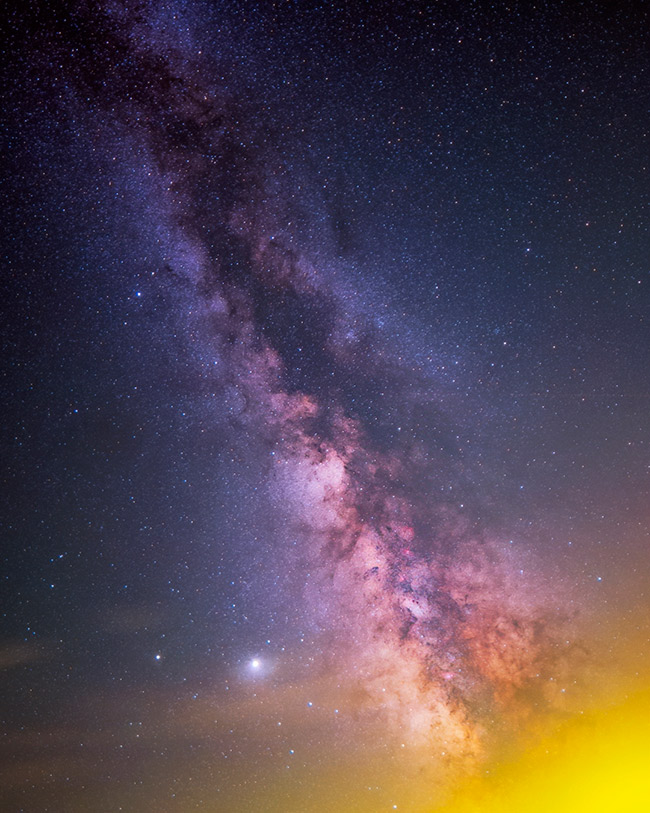 Camping Under the Stars

However, there are often more campsites available at this park than the other two, because the beach is not quite as nice for day visitors. For astronomy and stargazing purposes, it’s absolutely fantastic. 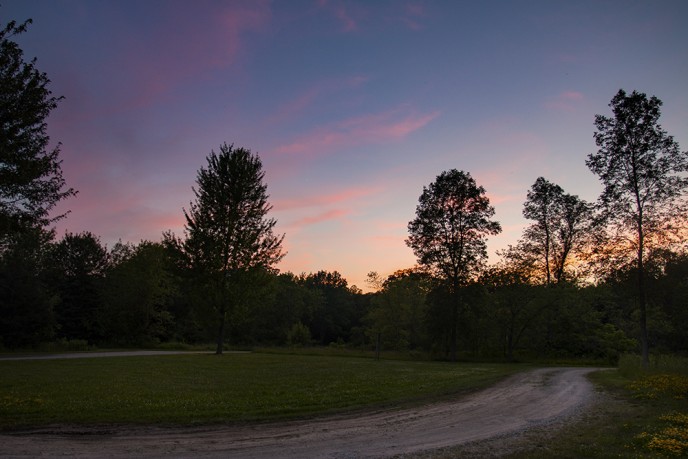 It boasts some of the darkest skies in Ontario, thanks to the large agricultural areas that surround the park. The closest city to this area is Port Dover, which is over 25 kilometers away.

There is very minimal light pollution from this park, with only a faint glow on the horizon across Lake Erie.

Here is a nightscape photo I took from Selkirk Provincial Park in 2020 using my Canon mirrorless camera and a 24mm wide-angle camera lens. 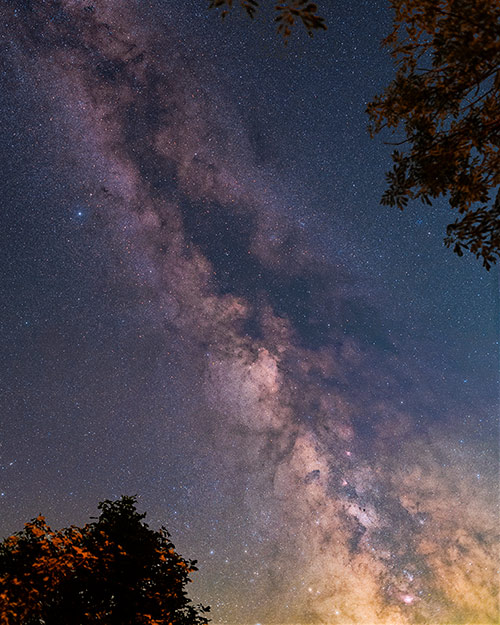 It is important to book your campsite around the time of the new moon, to ensure that you are taking full advantage of the limited light-pollution from these areas.  You will also want to make sure that you book a campsite that has an open window to the night sky, and is not blocked by the surrounding mature trees.

A useful website for previewing each site at Ontario parks campgrounds is Ontario Parks Campsite Pictures.  This way you can have a look at each site before you book!

The sky-window from my campsite:

I was hoping to have clear views directly south from my campsite (Site 85), but I ended up having a larger window to the West than expected.  This changed my imaging target from Sagittarius, to an object high up above in Cygnus.  The wispy nebulosity in NGC 7000 – The North America Nebula captured my attention once again.

I settled on an area that included the Pelican Nebula – an object have not yet given a fair attempt at before. 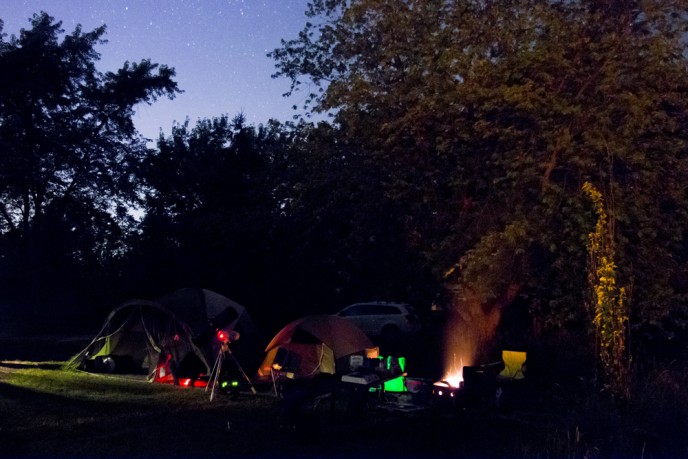 My modified Canon Xsi DSLR did a good job at picking up the bright pink and red nebulosity of the Pelican Nebula. I wonder how many more shutter actuations my old 450d can handle?

That old DSLR has been through every type of outdoor condition you could think of – including being completely covered in ice in the heart of winter. If I had to guess, I would say that this camera has at least a 60,000 actuation shutter count.  Maybe much more! 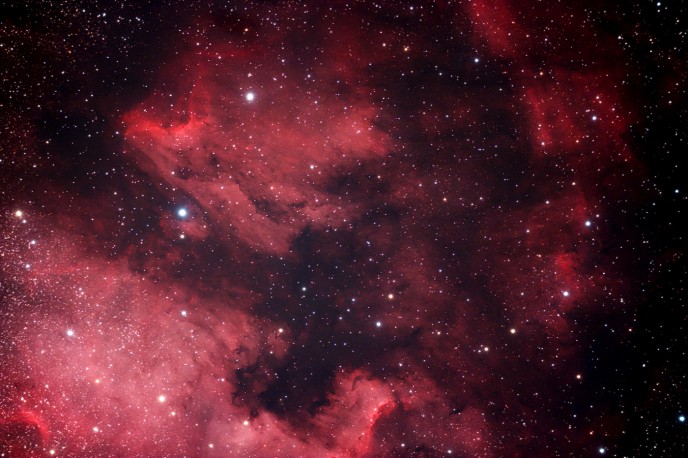 As per my usual routine, I shot several exposures (In this case 5 minutes each) at ISO 1600. This is the max ISO for this camera and does produce a fair amount of noise.  Luckily, most of this noise is canceled out in the stacking process by using dark frames.

With stacking software (Like DeepSkyStacker), the isolated noise data is removed from the final image. There are several tutorials online to better describe this process.  I will go over the stacking process and workflow in a future post, for anyone interested.  For now, I will share a link to the software I use; DeepSkyStacker.

It is currently the only program I use, and I am very happy with it. 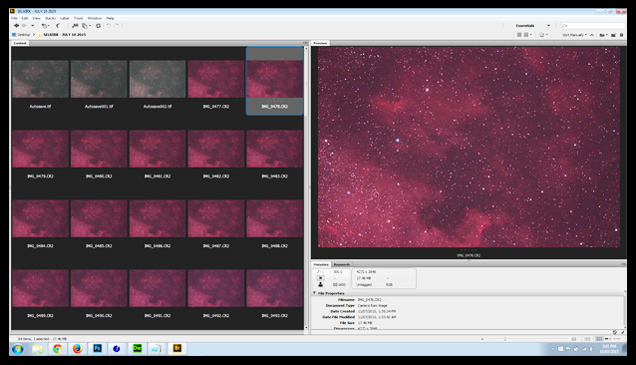 Stargazing at its finest

The Milky Way was clearly visible to the naked-eye, a sure sign of limited light-pollution and dark skies.  Aside from astrophotography, stunning views of the summer constellations and Messier objects are within reach to anyone with a pair of binoculars or a telescope.  An amazing surprise we had that night was beautiful pink aurora overhead to the North!

I heard reports from back home in St. Catharines that it was quite a show around 2am. Rarely do I see the Northern Lights from Southern Ontario, so it is always a treat. A lazy yellow waning crescent moon rose out of the Eastern horizon around 2am, and with that, it was time to get some much needed sleep!

The Northern Lights as seen from our campgrounds

Selkirk Provincial Park is a great place to go camping with your friends and family in the summer. What attracted me to this park was the dark skies to the South and the proximity to my home.

It was just over an hour’s drive from St. Catharines.

This was my second time to the park this year.  Our visit in late May was a very wet experience as there were intense thunderstorms the night we stayed.  This time, however, I got the trip I wanted with warm, clear skies all night long. If you are also looking to enjoy some astronomy at Ontario campgrounds, I should remind you to check the forecast and moon phase calendar first.

This way you can appreciate the advantages of having darker skies than you are used to in the city. 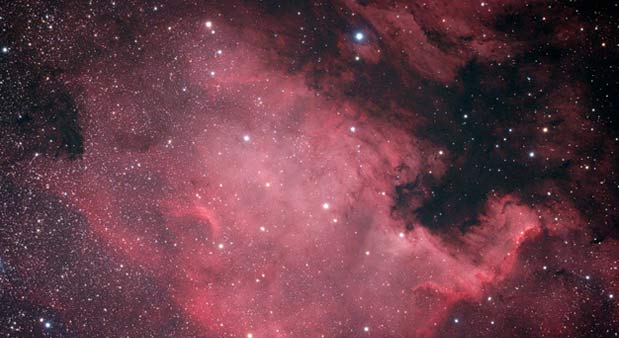 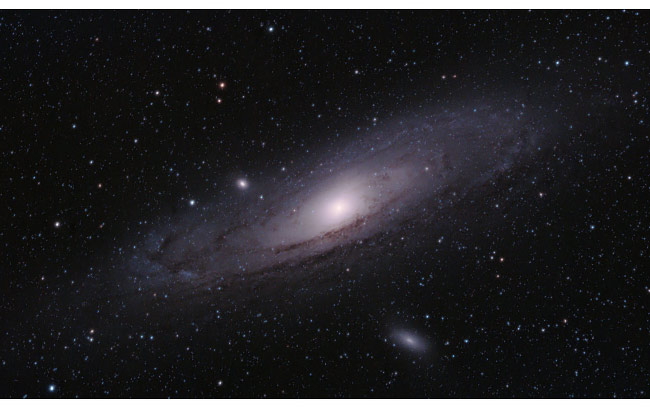